Outlaw King: Behind the Scenes

Netflix original, Outlaw King hits small screens around the world this Friday 9th November. The story follows Robert the Bruce as he battles to regain control after being made an outlaw by the King of England for taking the Scottish Crown. 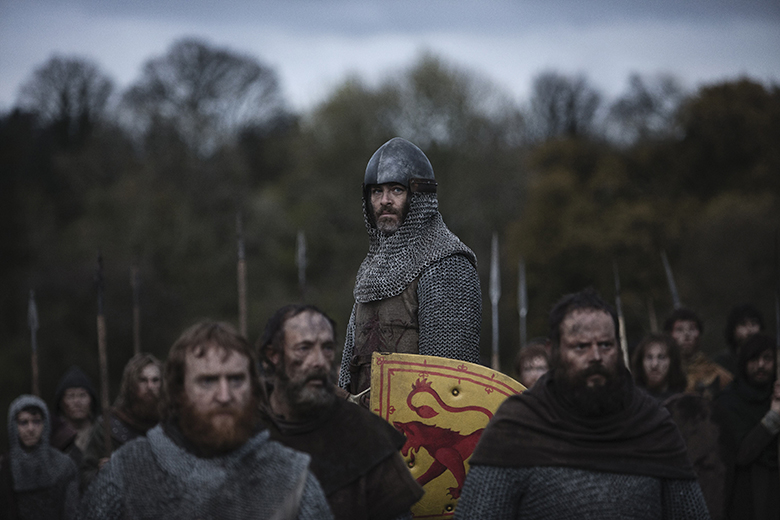 Stars of the screen

From Seacliff Beach in East Lothian to Talisker Bay on the Isle of Skye, the film was shot in stunning locations across Scotland. We were excited to have six of our sites used during filming, and even more delighted to see them play their starring roles in the film!

Gillian Urquhart, our Events Manager who handled the filming at our sites told us, “The director, David Mackenzie, wanted to use as many real locations and buildings as possible. We knew they wanted to achieve a lot in a short time, and they really did! It all moved very quickly and the teams here at Historic Environment Scotland were extremely accommodating in assisting with this production. Having seen the film recently, I think our sites look amazing!”

In this blog we reveal the real locations behind the movie scenes, and give you some behind the scenes insight from our staff who were on set. Be sure to watch Outlaw King and spot our sites for yourself!

Craigmillar Castle takes centre stage as it comes to life as Bruce’s castle and village. Over two separate filming shoots, the crew built a medieval village to the north of the castle, and had a gate built in the outer courtyard.

“The castle looked spectacular with crenellations, a two-storey stable block and various lean-tos added,’ says Monument Manager Alastair Hunt, “it was amazing to see the battle scenes being filmed around the yew trees in the inner courtyard.”

Around 30 horses and archers assembled in the park to the south of the castle, before filming took place in the outer courtyard. 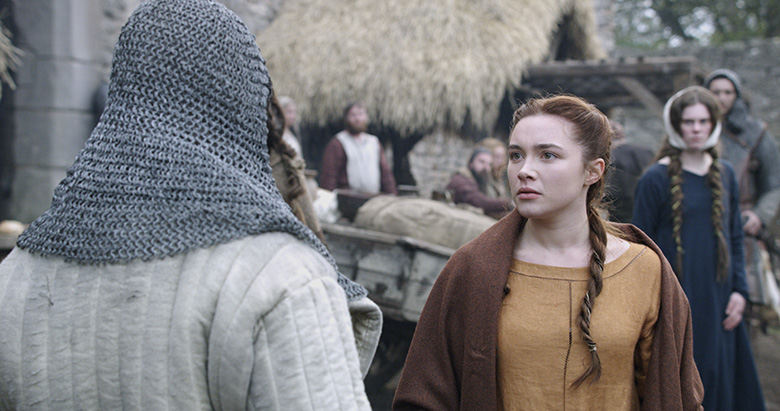 Distinctive Blackness Castle with its rocky courtyard and ship-shaped exterior is easily spotted in Outlaw King, as it plays Yorkshire Castle where Bruce’s wife Elizabeth is imprisoned.

Before and after the filming that took place at Blackness Castle in November 2017, the staff kept the site open as much as possible, meaning that many lucky visitors got a genuine behind the scenes experience to see the set.

“A great deal of clever work was done to clad metal railings in timber. Timber features including a balcony outside the water gate and a platform rising above the North tower were added, and a wooden staircase leading up to the pit prison entrance was removed and the doorway plugged,” says Monument Manager Graeme Sinclair,

“There was such skill and workmanship involved that you really felt you were getting a privileged glimpse into the distant past.” 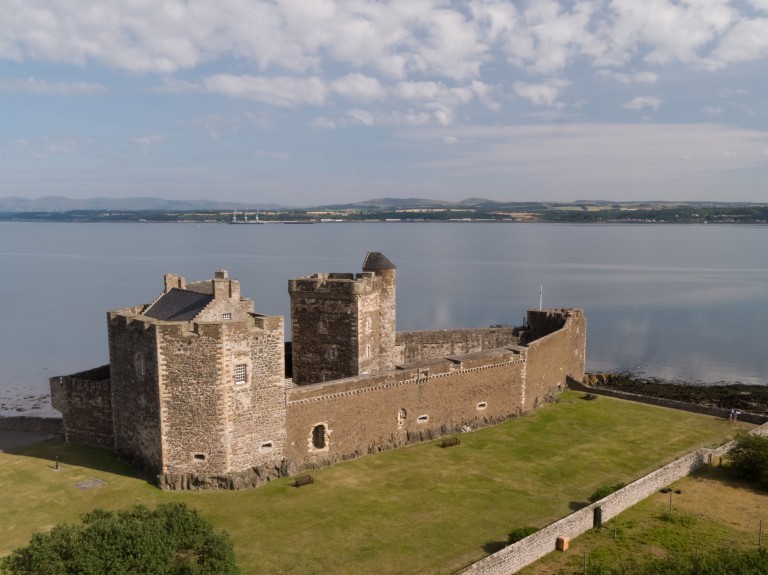 No stranger to the screen, Doune Castle is picked once again as a location for Outlaw King, and becomes Douglas castle and church in the film. Look out for a brilliant shot of the castle up in flames!

“The quality of the set design was absolutely amazing,” says Douglas Wilson, Admissions & Hub Manager at Doune Castle, “they created false walls that looked so real it was only when you touched them you realised they were wood and paint effects.”

Look closely at the image below, the scaffold tower in the background and the wall behind the wooden barrels are both false. 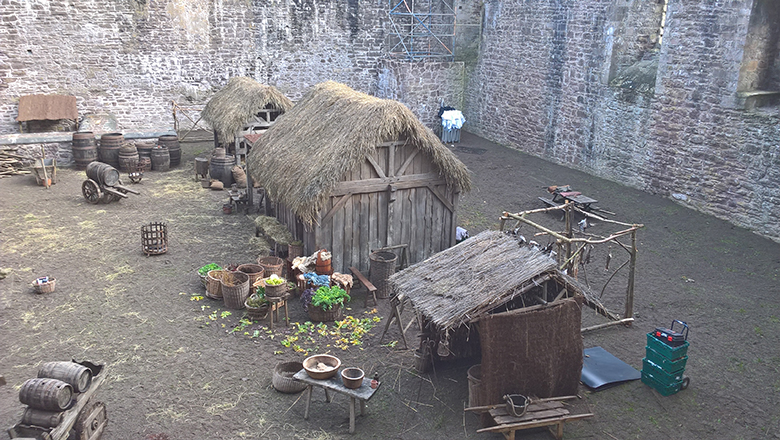 A fitting location to be picked for Outlaw King, Dunfermline Abbey is the burial place of medieval monarchs, and the tomb of Robert the Bruce himself is in the adjacent Abbey Church. In the film however, the Abbey plays Westminster.

Edward I was first at Dunfermline Abbey in 1303, and used it as his winter headquarters, he returned in 2017 in the guise of Stephen Dillane who played the role in the film.

“This is the first time that Dunfermline Abbey has been used for filming recently so we were beyond excited to have the crew here,” says Monument Manager Anne-Marie O’Reilly, “

“There were two swans in cages either side of a throne that was built over the remains of the Holy Rude screen, and the extras spent the day in the Abbey Church of Dunfermline right beside the tomb of Robert the Bruce whilst waiting to film.” 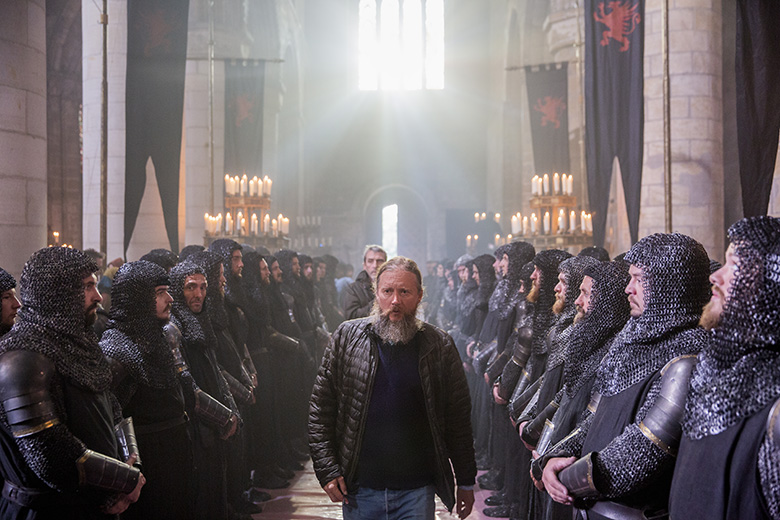 Picked to feature as Greyfriar’s Cathedral and the Lord’s Hall in Outlaw King, viewers will be able to spot the beautiful, impressive interiors of Glasgow Cathedral.

The set designers transformed Glasgow Cathedral to look like an authentic medieval cathedral. Glass cabinets in the lower church could not be moved and were therefore covered to look like alters. Grills and slabs were covered, and huge candelabras were brought in to create a dramatic ambience. 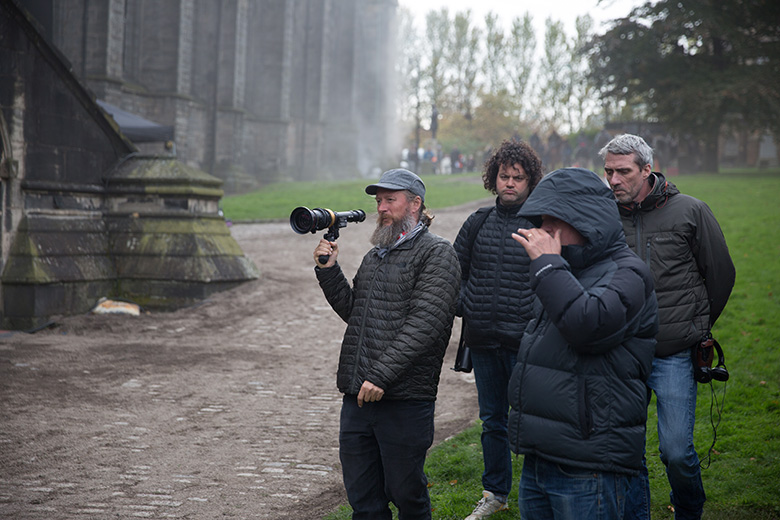 Linlithgow Palace’s showpiece, its ornate fountain at the centre of the courtyard, is easily recognisable in Outlaw King. The Palace plays Bruce’s castle chapel.

“The courtyard of the palace was transformed with barrels of ale, sacks of grain, carts stacked with vegetables and small fires with cauldrons above cooking all sorts of medieval fare,” says Monument Manager, Alan Mowat, “Extras sat on benches at tables eating and drinking while others were mending cartwheels. It was amazing to see the knights on horseback thundering through the entrance of the palace!”

“My team were most impressed by the complete alteration done to our plate-glass shop door. A template was built to cover the door and surrounding windows, this was painted and textured to make it look like one of our stone walls. It easily fooled anyone who didn’t know there was a door there. It was also fantastic to watch the coronation scene that was shot outside the palace, it was a beautiful evening and the sunset turned the palace a stunning orange tinge.” 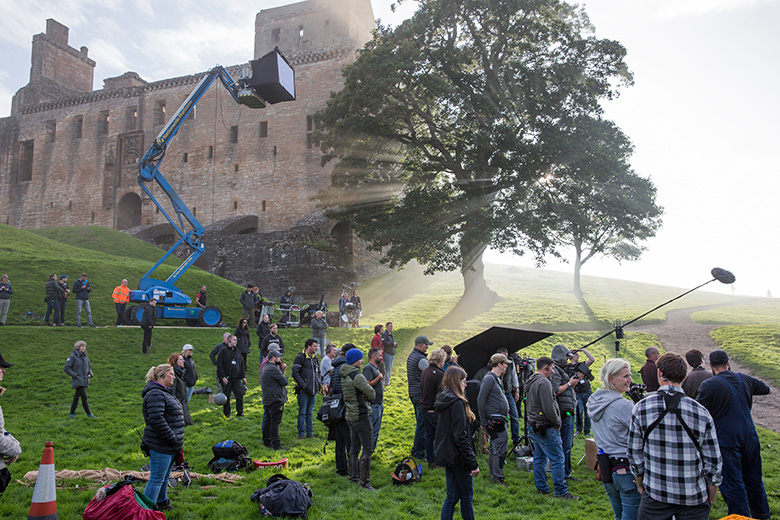 “Seeing the temporary structures that were built at sites like Doune Castle and Craigmillar Castle gave us such an impression of what the courtyards and surrounding would have been like,” says Nicki Scott, Cultural Resources Advisor, “The skill of the art department was fantastic. It was near impossible to tell, even close up, what was fake stone and what was real. It was rather unsettling seeing Doune Castle ‘on fire’, even knowing it was special effects! We owe so much to the works teams in making filming projects like this happen, it places huge demands on them and we couldn’t make it work without their efforts.”

Feeling inspired to visit the real locations behind the film? Find out more about visiting not only our six filming locations, but our many sites around Scotland that are a part of the real stories of Robert the Bruce.