What’s in a name?

What do Scotland’s street names tell us about our history and culture? Take a number crunching tour with our data management team.

We can discover a lot about Scotland’s history through the language associated with its historic places. In this blog, Alex Adamson looks at Scotland’s most listed street names to see what stories the data can tell.

Listed buildings enrich Scotland’s landscape. They chart a great part of our history, which is one of the reasons we designate them with a listed status.

There are many ways these buildings are architectural records of our history. I thought it would be interesting to explore the addresses for patterns and clues. Between the language, the listings and data, there was a story to tell. 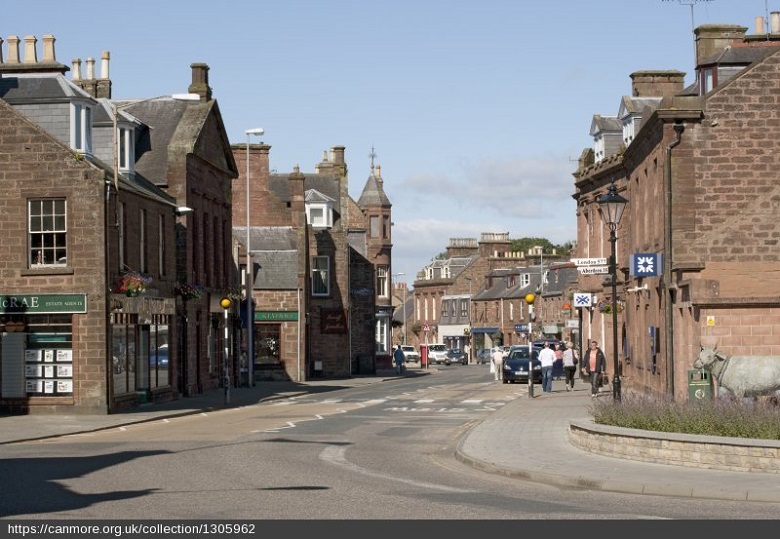 In 2018, Turriff was voted Scotland’s Most Beautiful High Street, recognising the heritage, beauty and unique experience of the town centre.

From Street to Square

Most listed buildings in Scotland are in towns and are likely to have a street address – also known as an odonym.

These buildings are often concentrated in the older parts of towns – the burgh cores. To be listed, they need to have survived through the decades, or centuries, and have ‘special architectural or historic interest’.

With the help of my colleague Mike Middleton, I extracted and analysed the listed building address data, which is downloadable from the Heritage Portal, to see what it could tell us.

Scotland has many lovely ‘crescents’, ‘avenues’ and ‘walks’, but they are often more recent additions to the naming lexicon. There are examples of ‘lanes’ going back into medieval times but a lane historically had a lower status than the surrounding streets and roads. Unfortunately for ‘lanes’, we have only 573 listings for them all over Scotland.

My next step was to analyse the full street names for listed buildings. The most common ones came as no surprise. Top of the list were High Street (2,985) and Main Street (1,406), the traditional names for the central thoroughfare of a Scottish town.

Our towns weren’t averse to using a good, descriptive name and a number of common landmarks, monuments, and social gathering places come through in the listing addresses. 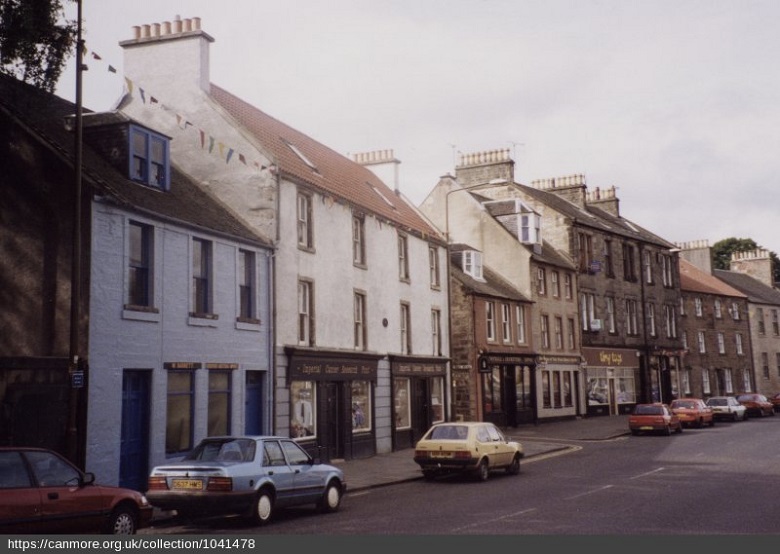 This photo of Linlithgow’s historic High Street was taken in 1992. You’ll find lots of B and C listed buildings here!

Others include Market Street, Harbour Street, The Cross, Park Road, and Commercial Street.

High status streets have often been named in honour of important people. For Scotland throughout the centuries, who could be more important than the monarchy?

The fourth most common street name for listed buildings was George Street (333). Of course, there were a lot of King Georges and only one Queen Victoria, but she does the best of any individual monarch. Victoria Street is twelfth on the list (155). 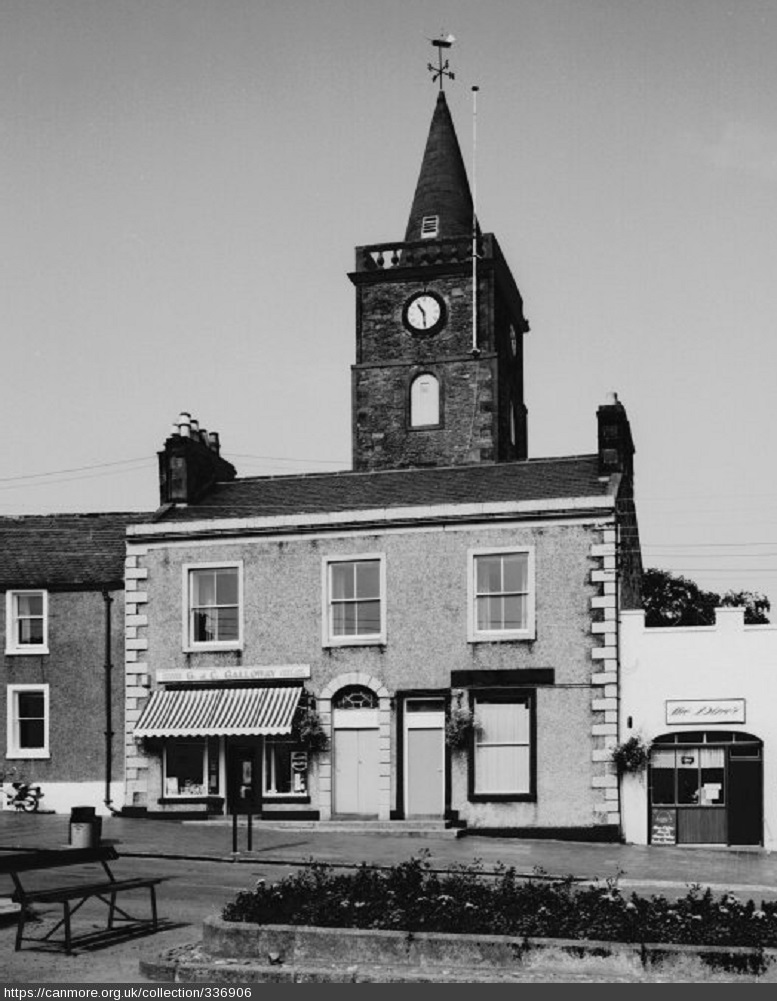 The old Town Hall and Bell Tower on George Street in Whithorn are category B listed.

Additionally, there are a number of more generically royal names such as King Street (187), Princes Street (152) and Queen Street (152). Similarly, Union Street is a popular name for high status streets and ranks ninth (210).

The one personal name in the top twenty that does not fit the pattern is John Street (141).

Listed buildings at every compass point

Would you rather live in North, South, East or West Street?

If it’s listed buildings that you‘re interested in, then South Street is a clear winner with 253 sharing the address name. North Street follows with 143, but only 23 in West Street and 10 in East Street. To be fair, Great Western Road in Glasgow does pretty well all by itself with an impressive 115 listed buildings! 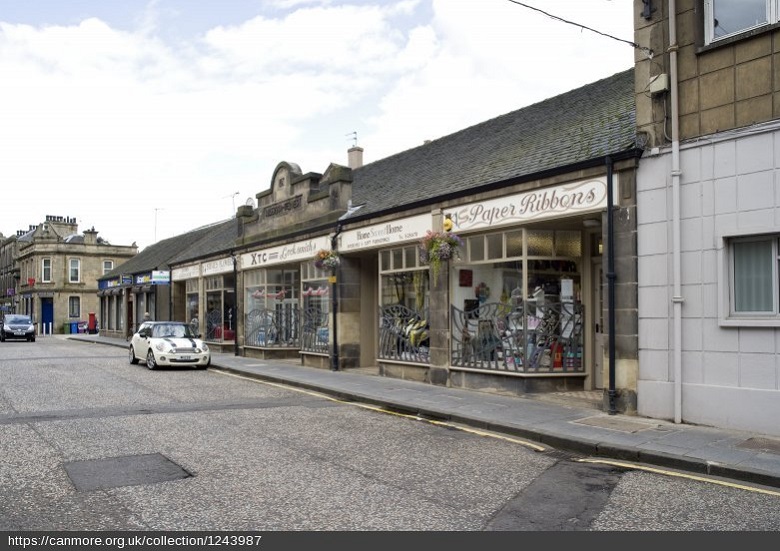 In 2004, this row of 1930s shops on South Street in Bo’ness was awarded Category C listing in 2004. These shops are one of a number of ‘Anderson Bequest’ buildings in the town funded by the legacy of ship owner and banker John Anderson (1794 – 1870). Anderson is known locally as “the King of Bo’ness”

All roads lead to…

The final pattern that appeared was roads that lead towards another town. Neither Glasgow Road (74) nor Edinburgh Road (63) made the top thirty, but one did. Sitting in a central location and well linked by road to the north, south, east and west, the winner was Perth Road (113). 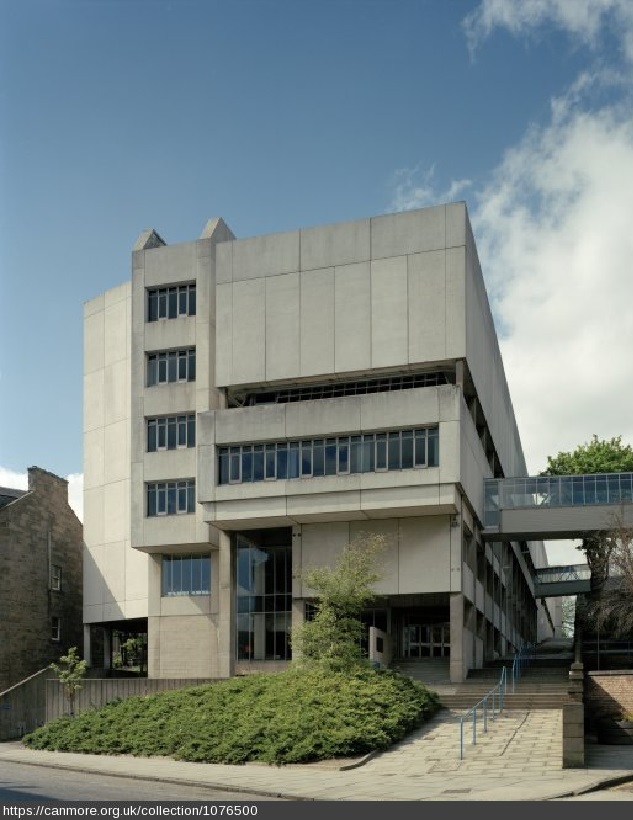 For fans of Brutalist architecture, here’s the Category B listed Matthew Building on Perth Road in Dundee. It was listed in 2014.

The top twenty are:

So what does this tell us? As a broad rule of thumb, historic urban buildings survive best in streets that fall into these categories:

If you’d like to crunch some numbers yourself, you can download our data sets for free on the Heritage Portal.

Alex Adamson is the Deputy Head of Survey and Recording and leads the Data Management Team. He and his team work on some of our existing websites, such as Canmore, PastMap and HLA, and on ways to make our great treasure trove of data about the historic environment as easy to find and understand as possible. View all posts by Alex Adamson