The Holocaust: Evidence from the Air

Within our archives, Historic Environment Scotland cares for a unique collection of evidence about the Holocaust. Explore this significant archive of irrefutable evidence of Nazi German concentration camps.

During the Second World War, Nazi Germany and its collaborators perpetrated atrocities against millions of people, persecuted as a result of their identities and beliefs.

Six million Jews were murdered, as were other groups deemed enemies of the Third Reich. This included the Roma and Sinti communities, gay and lesbian people – or those who were assumed to be LGBT – people with disabilities and those with mental ill health.

Prior to the Second World War, the Nazi German government pursued a brutal policy of antisemitism. Following the outbreak of war in 1939 Nazi officials zealously escalated measures against the Jews. They claimed that Jewish people posed an existential threat to the Third Reich. In 1941, after eight years in power, Nazi Germany began its official programme of state sanctioned, systematic mass killings. Key to carrying out this atrocity – the Final Solution – was the establishment of concentration camps, or killing centres, in Germany and German-occupied Europe.

At Historic Environment Scotland, we care for the National Collection of Aerial Photography (NCAP). NCAP is one of the largest and most significant collections of historic aerial photography in the world. Some of the most important events in modern history are recorded in the collection, including irrefutable evidence of Nazi German concentration camps.

The collection was established at the Central Interpretation Unit, RAF Station Medmenham. This large country house in rural Buckinghamshire was requisitioned for the war effort. It became the Allies’ headquarters of Photographic Intelligence during the Second World War.

Images created during Photographic Reconnaissance missions, that survive in the collection, record the horrors of the Holocaust. They are testimony to the fact that millions of people were stripped of their humanity and murdered during the Nazi Persecution.

Holocaust Memorial Day 2020 marks the 75th anniversary of the liberation of Auschwitz-Birkenau, in German-occupied southern Poland. This was the largest of the Nazi German concentration camps and extermination centres, where over 1.1 million men, women and children lost their lives. 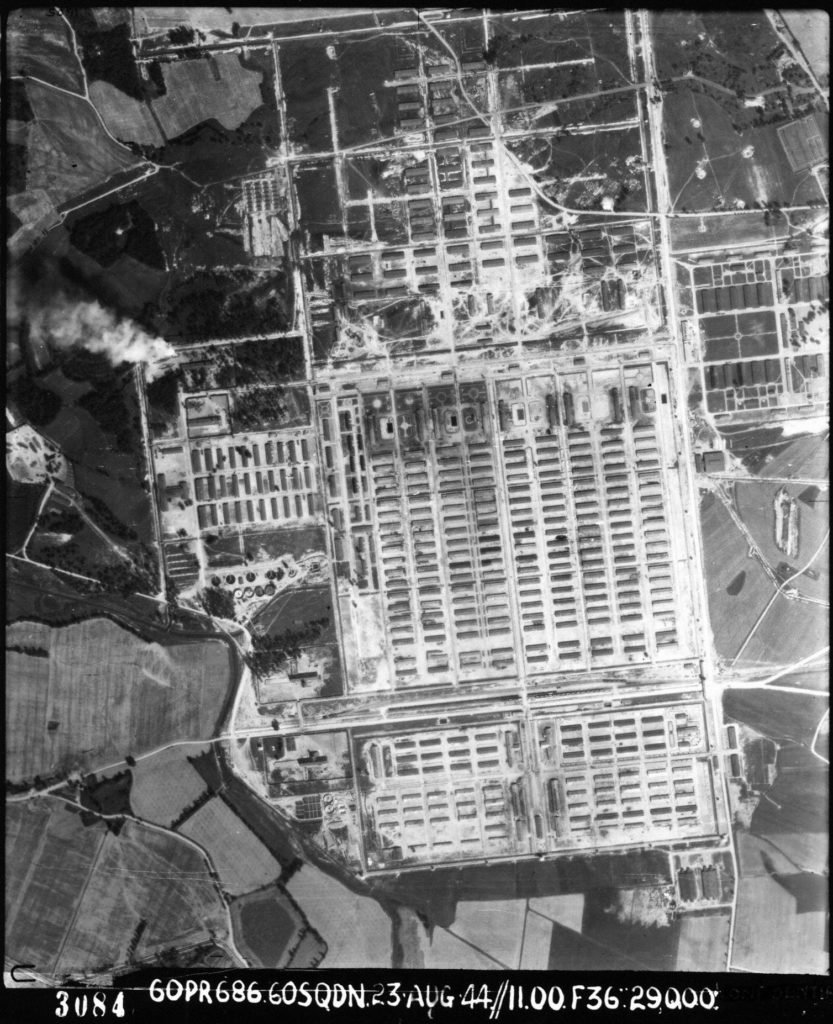 This particular photograph, which records the Auschwitz-Birkenau II complex was taken by the South African Air Force on 23 August 1944. The pilot was on a reconnaissance mission to photograph a neighbouring chemical factory. In the process he comprehensively recorded the concentration camp. The concentration camp would not be liberated by the Soviet Union’s Red Army for another five months.

At first it is hard to make out what is happening on the ground. However, if you analyse the image carefully you can see clouds of smoke, a railway line leading into the camp and a long line of people being marched into a hut. 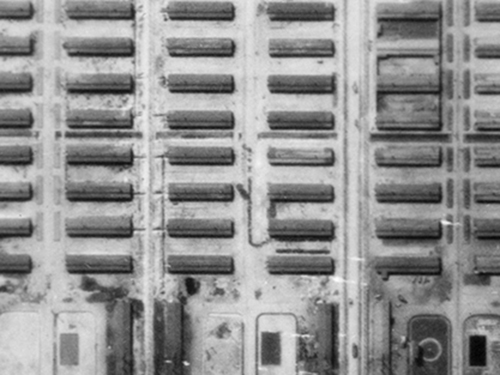 A line of prisoners is clearly visible in this enlarged view of Auschwitz-Birkenau II. 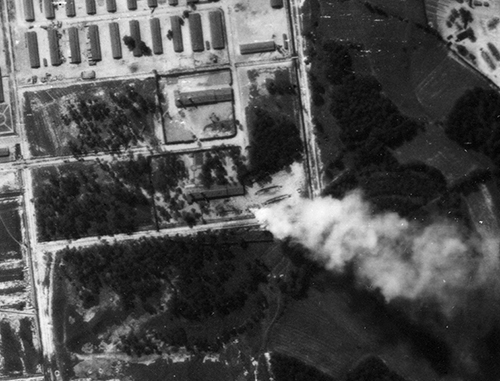 The the burning pyre of bodies at Auschwitz-Birkenau II.

This image is particularly significant because it records the camp during the mass extermination of the Hungarian Jews. Gas chambers, crematoria buildings and outdoor incineration pits are all clearly visible. With the crematoria ovens unable to meet demand, this image graphically records the open-air cremation of thousands of bodies. Crucially, these records provide a snapshot of evidence that the Nazis attempted to destroy a short few months later.

One of the millions of victims at Auschwitz-Birkenau was Jane Haining. She was a Scottish missionary who worked as a matron of a boarding house for Jewish and Christian girls in Budapest. 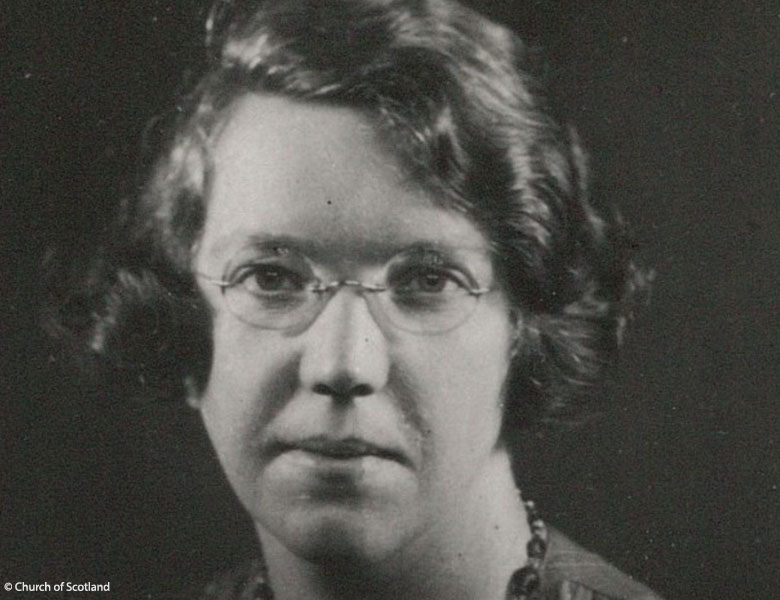 When the Second World War began, Haining decided to stay in Hungary. She ignored the request from the Church of Scotland to return home. Haining insisted that the children’s need of her help was greater than ever and vowed to remain at her post.

In March 1944, Nazi Germany invaded Hungary. Shortly after, Haining was arrested by the Gestapo. Among the charges made against her were that she had wept when putting yellow stars on the Jewish girls in her care (a symbol used by the Nazis to distinguish the Jewish community) and that she had listened to BBC news broadcasts.

She died in Auschwitz-Birkenau in July 1944. In 2010, the courageous Scot was named a British Hero of the Holocaust by the British Government.She is the only Scottish person to be officially recognised at Yad Vashem, the World Holocaust Remembrance Centre in Israel. In 2015, the extraordinary work of Jane Haining was also recognised through our commemorative plaque scheme. Today, you can visit a memorial cairn and heritage centre at Dunscore Parish Church, Dumfriesshire, where she was born and raised. 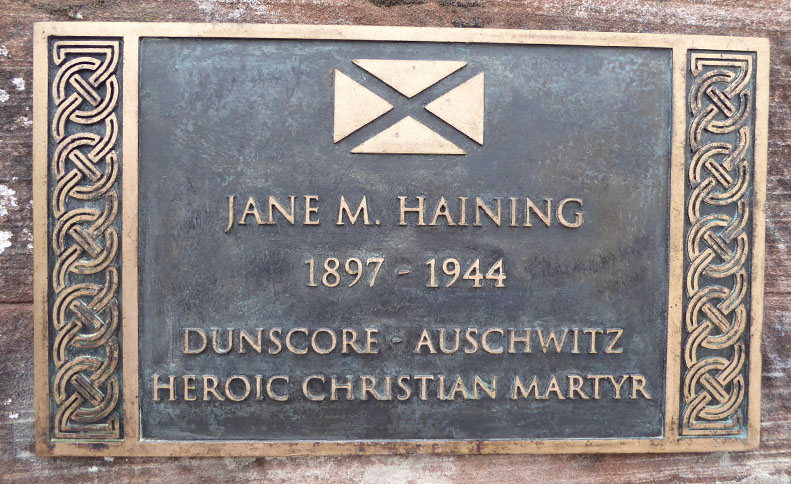 Bergen-Belsen began as a camp for Allied Prisoners of War, in what is today Lower Saxony in northern Germany. In 1943 the site was turned over to the SS – the military arm of the Nazi Party – and repurposed as a concentration camp. 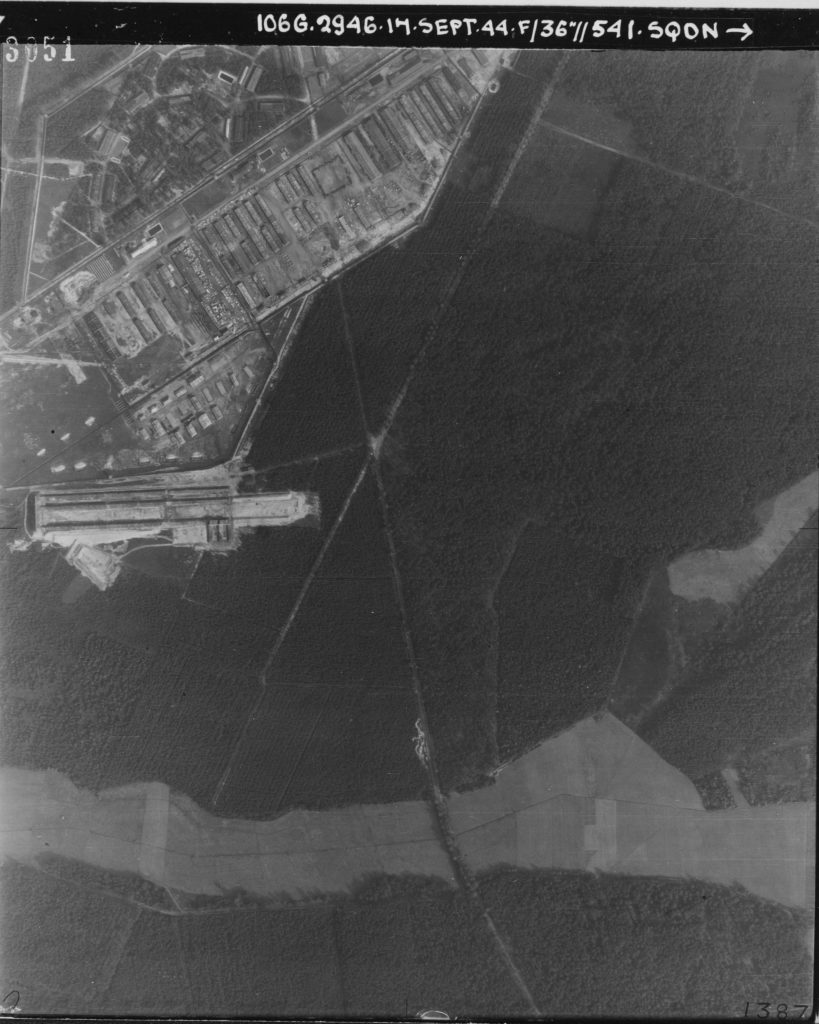 This image was taken during a Photographic Reconnaissance mission by the Royal Air Force on 17 September 1944. A group of prisoners can be seen in the square designated for roll-calls. Survivors from the camp told of standing in this square for hours, silently and at attention. In the burning sun or the rain, snow or frost, prisoners would stand in rows while the SS counted them. 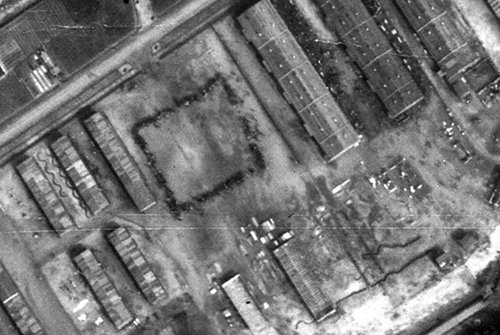 This close up of the above image clearly shows prisoners standing in formation in the large, open square.

Around 50,000 people died in the Bergen-Belsen camp complex. Among them was Anne Frank, the most well-known child diarist of the Holocaust. She died just two weeks before the camp was liberated. 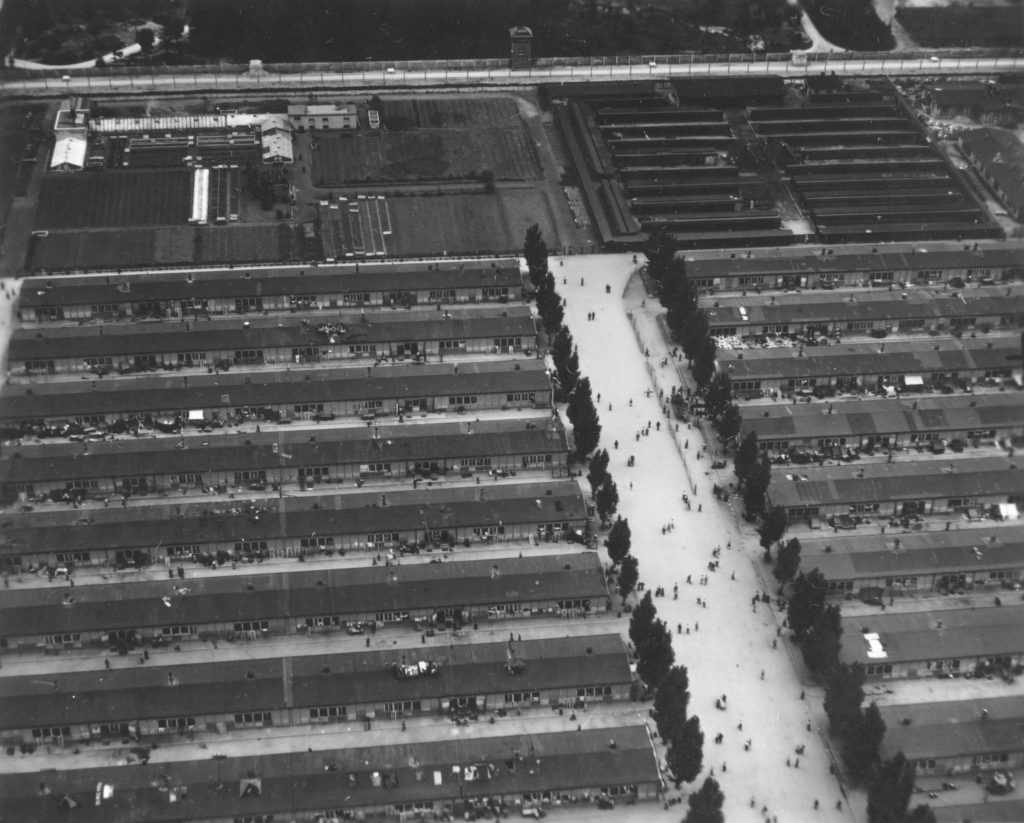 This photograph was taken by US airman Richard Shirk in May 1945. American troops had liberated the camp survivors in April, after Victor Maurer, a representative of the International Red Cross, negotiated an agreement to surrender the camp.

Although the camp had been liberated, Europe was in chaos and going home wasn’t a simple undertaking. The survivors that Allied and Soviet forces found in the camps were often close to death. Forced labour, starvation, disease, medical experiments and years of abuse meant that many prisoners were so weak that they could hardly move. For most people, liberation didn’t mean leaving the camps. At Dachau, an epidemic of Typhus swept through the camp after liberation.

By the autumn of 1945, the U.S. Army were using the camp to detain war criminals. By the end of December, the American Military Tribunals known as the Dachau Trials had seen around 1,200 people tried. Nearly three quarters of those tried for war crimes were convicted.

The National Collection of Aerial Photography contains more than ten million photographs taken during the Second World War. Created by Allied Photographic Reconnaissance squadrons, based around the world, the collection also includes a million aerial photographs captured from the German Luftwaffe at the close of the war that record the Holocaust in Eastern Europe.

Through ongoing efforts to physically preserve and digitise these unique photographs, on Holocaust Memorial Day 2020 – 75 years since the liberation of Auschwitz-Birkenau – Historic Environment Scotland remains committed to making the wealth of evidence they contain ever-more publicly accessible.

Each of the photographs records a moment in history, one second within years of continuous killing. They are now part of a unique collection of evidence about the Holocaust. The photography is a testimony to the dead, to the survivors, and for the generations that follow. Above all, it allows us to learn the lessons, to deepen our memories and humanity and to transmit these lessons.

Allan has led the growth and development of the National Collection of Aerial Photography (NCAP) since 2001. The official custodian of aerial imagery declassified and released by the UK Ministry of Defence and British Government agencies, NCAP holds more than 30 million aerial images that date from the 1920s to the early 21st Century. Allan holds a PhD in Intelligence Studies from the University of Edinburgh on the role of Photographic Intelligence during the Second World War. View all posts by Allan Williams