Independent researcher and archaeologist Morag Cross shares her thoughts on the “hidden women” who shaped Scotland’s streets. Read on to find out how some women used their money and influence to shape our streets.

Do you ever wonder why women don’t appear more often in history books? Well, one reason is that they are actually there, but hidden and disguised as other things. You just need to squint to find them!

Women do make an impact on our towns and streets. For instance, women commissioned and paid for male architects and contractors to build countless churches, schools and homes across Scotland. Barclay Church in Edinburgh (pictured above), Elder Park in Glasgow, and the restoration of medieval St Clement’s Church in Rodel, Harris were all funded by women. 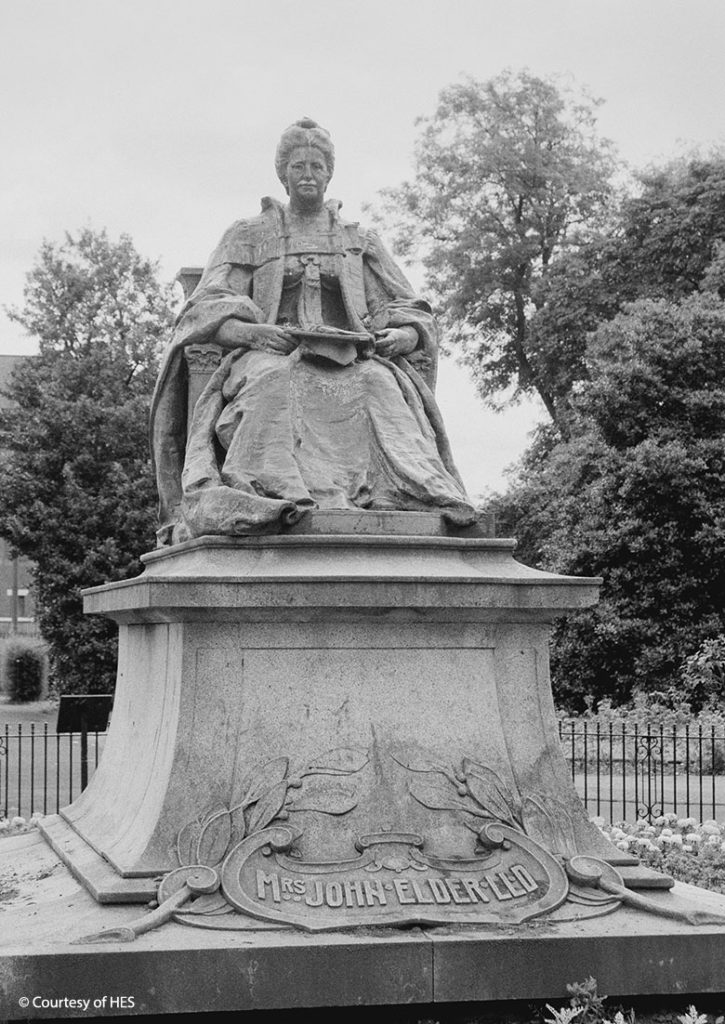 Isabella Elder (1828-1905) was one of Scotland’s greatest female philanthropists. She was renowned for her work to improve the lives of Govan’s residents and for widening education opportunities for women. Her statue (funded by the community) remembers her as ‘Mrs John Elder’. Although this is jarring to us now, it was the respectful Victorian style of address for married women

Left by women to the memory of men

You might be surprised by how many of our beloved buildings would not exist without funding provided by women. But their names are often forgotten in favour of ‘big name’ male architects, like Charles Rennie Mackintosh. One of his last architectural clients was female – Florence Brooks (1919), whose family made Portland cement.

Women’s contributions to our environment accumulated over time. Daughters were landowners, widows ran businesses, it’s just a question of perception. It’s worth peering hard to see the everyday females lurking in the shadows…

It’s time we started looking out for memorials ‘dedicated to men, erected by women’. It’s not a question of ‘decolonising’ male names, but rather re-inserting the missing female ones. It enriches our environment if we add to and explain it, rather than subtract from, and censor it. 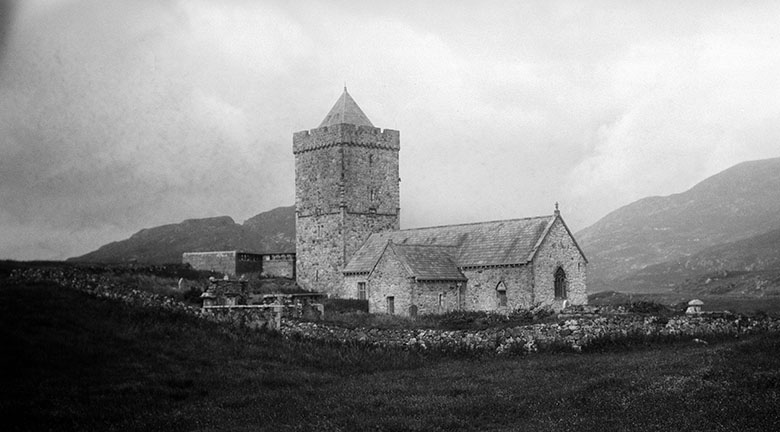 One very pessimistic estimate is that women’s records only form 0.5% of texts from the last 3,500 years. This clearly can’t be an accurate reflection of their actual contributions to written history, much of which is likely to have been disregarded and lost. Women were obviously there – we all have mothers! Thankfully, from the 18th and 19th centuries, especially since compulsory education, women’s archives survive in far greater numbers than this.

Women, like Stirling antiquary Christian Maclagan (1811-1901) also preserved their surroundings via their research and illustrations. The history of women’s scholarship is often ignored, because for too long it was assumed that female historians are a purely modern phenomenon.

Christian was among the earliest women to publish her own antiquarian research from 1870 onwards, and her energy in visiting so many ancient monuments is astonishing. She was awarded a Historic Environment Scotland commemorative plaque in 2018.

She almost certainly isn’t Britain’s, or Scotland’s first female archaeologist, as Frances Stackhouse Acton (1794-1881) and Lady John Scott, nee Alicia Spottiswoode (1810-1900) both precede her. Acton’s description of her English excavations was published in 1846, and Lady John’s articles on her work in Berwickshire appeared in print between 1863 and 1868.

However, Christian is an important transitional figure between the older discipline of antiquarianism, and modern archaeology, combining elements of both. She might be considered a ‘scientific antiquary’, or, inventing a new term, a unique ‘antiquologist’!

Women ‘wynd’ around us

As was so common, Christian Maclagan commissioned a church, in memory of a beloved brother. Women are sometimes hidden behind male representatives called ‘trustees’. Her architects, F T Pilkington and Bell of Edinburgh, had already dealt with (two deceased) women’s trustees paying for Edinburgh churches. Christian was Pilkington’s first recorded living female client. 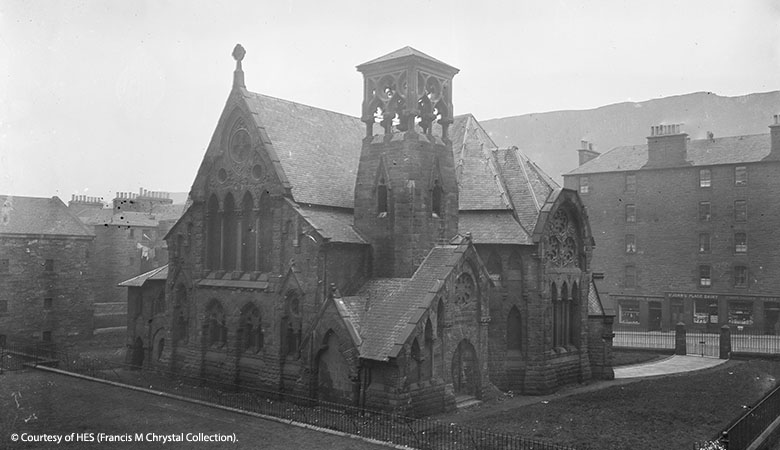 Helen Thomson of Westbarns left money in her will to build Moray Free Church. The church was designed by F. T. Pilkington in 1862. It was demolished in 1930. The site is now occupied by Moray House College of Education.

St Mary’s Wynd in Stirling is named after medieval Europe’s most famous woman – the Virgin Mary. In 1865, Christian purchased a garden there from Charlotte Reid, ‘milliner and dressmaker’ in Stirling. Christian was well-intentioned but had chosen an awkward, steeply-sloping site that meant her ‘Marykirk’ was built ‘half underground,’ was dark, and multiple steps made access difficult.

In 1866, Pilkington designed a small church for Christian costing £1,000 but no plans or illustrations survive. Written descriptions suggest the Marykirk’s features were repeated in Pilkington’s other churches, like a rose window of intersecting triangles, seen in Dundee’s McCheyne Church. 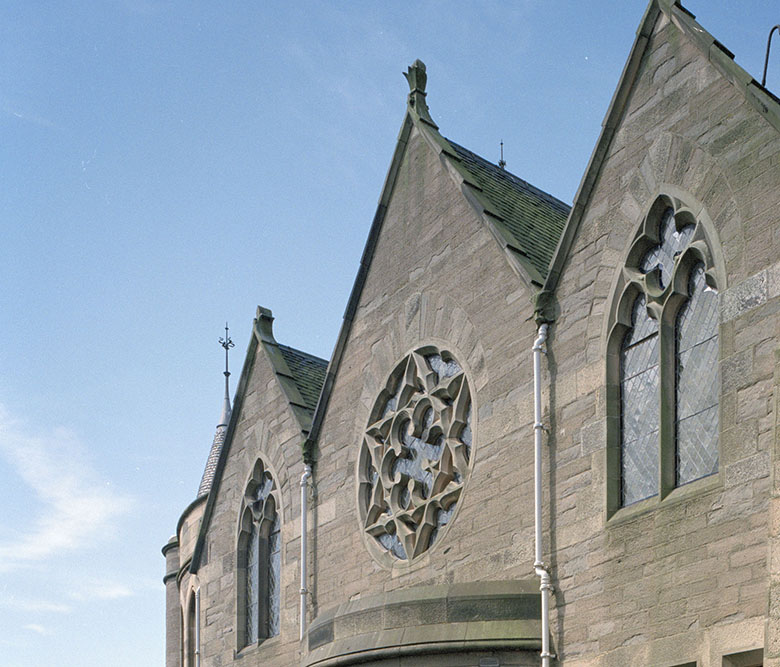 The church build for Christian Maclagan may have featured a window like this one in Dundee.

Marykirk’s ground-floor contained a row of six ‘trefoil headed’ windows ‘divided into two groups by a pilaster’. These re-appear in the similarly low-budget Morebattle, and the more lavish Kelso (whose minister preached at Marykirk), and Innerleithen. The coloured, or ‘polychrome’ stonework was a favourite of Pilkington, and is repeated elsewhere.

Sticking to her guns

By 1876, the church managers had failed to supply their promised funding, and Christian took them to court. The existing worshippers built a new, prefabricated iron church, and Christian donated Marykirk to the rival Church of Scotland (despite not being a member herself!). By today’s standards she would undoubtedly be considered as rather stern and uncompromising, but she was following her own deeply-held principles of personal integrity.

Ladies cut out of the picture!

More women now enter the story. In 1902, the exiled congregation were finally housed in a new building (the ‘Peter Memorial Church’) paid for by Mrs Ellen Peter. This church is now called St. Columba’s.

The only known photograph of Marykirk was taken by Isabella Wright (d 1932), who captured many Stirling scenes in the late 19th century. The original photo focusses on the romantic landmark, known as Queen Mary’s Palace or John Cowane’s House. The church only appears at the extreme left edge. This is oddly symbolic of women being ‘pushed to the side’ and excluded. 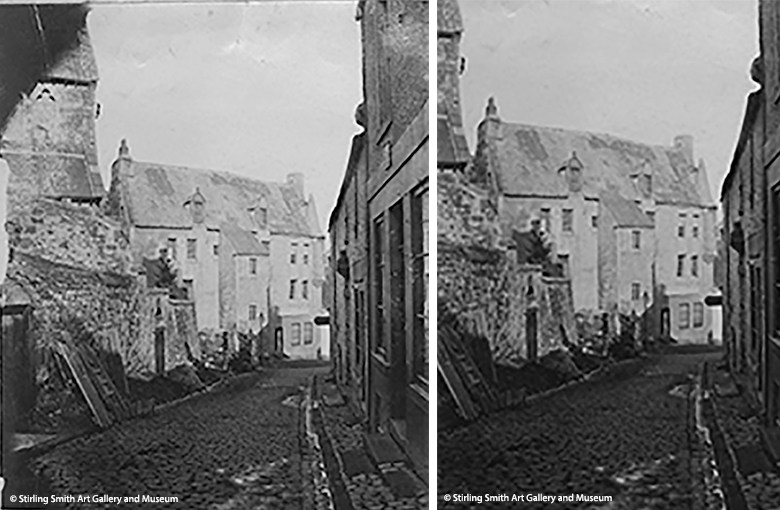 The left image shows Isabella Wright’s original photo. The right image shows the crop used in the Crowe and Rodgers postcard. Reproduced with kind permission of Stirling Smith Art Gallery and Museum. If you wish to access a higher resolution image, please contact the museum.

Christian often complained about her prehistoric research being dismissed due to male prejudice. However, her theories (e.g. stone circles were ruined houses) were eccentric even by contemporary standards, irrespective of her gender. She did have access to modern research (e.g. Daniel Wilson), yet continually refused to accept evidence that her ideas were mistaken. Her determination and intransigence were both her great strength, and a (very human) weakness. You can read about some of her other personal disputes on the History Girls Scotland blog.

The picture was copied by photographers Crowe and Rodgers, who sold it as a souvenir, probably profiting from Miss Wright’s photo. Even more symbolically, Christian’s church, like her research, was literally ‘cut out of the picture’ when the image was cropped to highlight the ‘Palace’. Marykirk vanished, and the cropped version appeared on tourist postcards, into the 20th century.

Although Marykirk was re-purchased by the Free Church in 1934, it was finally demolished around 1954.

Interestingly, the neighbouring housing was managed by Miss Katharine M Curror (1884-1965), the first female property factor in any Scottish council. Stirling held an exhibition in 1939 to celebrate the centenary of social reformer Octavia Hill (1838-1912), who had established property management as a profession suitable for women.

It is very unusual for any church to go unrecorded, especially a work by a famous architect like Pilkington. To fill this gap in women’s, local and architectural history – are there any photographs of this building out there? Were your parents or grandparents married in the original Marykirk in St Mary’s Wynd (not the modern Youth Hostel building, which is ‘Erskine Marykirk’ pictured below)? Are there any family photos showing groups in front of the church door? 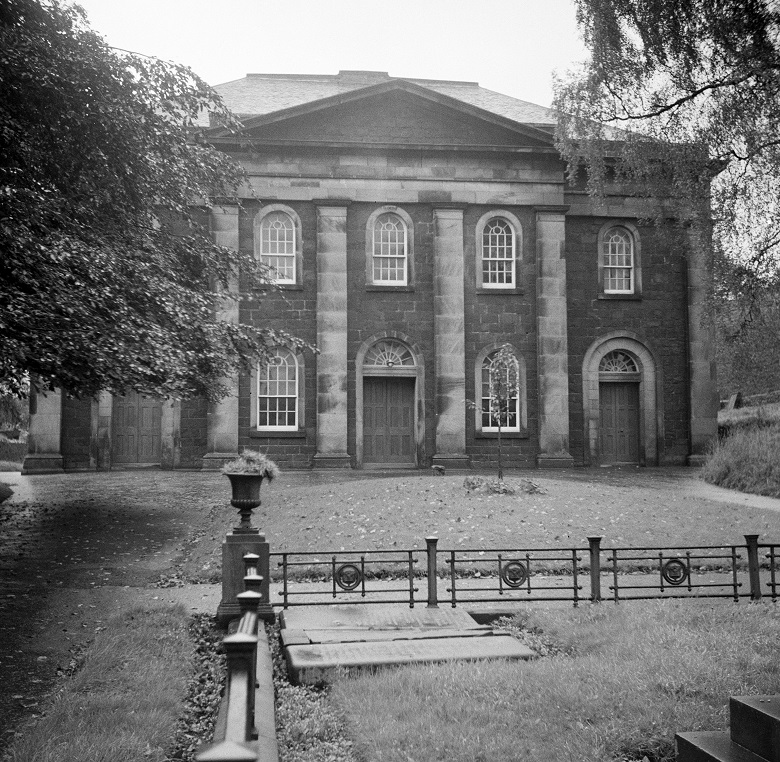 Although this building is also known as Marykirk, this is NOT the building we’re looking for!

Women do appear in our streets and this small example hopefully shows how they’re all around us, but their contributions are completely overlooked. Male architects need their female patrons! Women have frequently owned and managed buildings, gardens and institutions. Through their drawings and publications they curate and preserve everybody’s heritage. There are many names in archives, maps and street signs that belong to women, and curiosity will uncover many more. Assuming they’re not there is incorrect, they are – but now they need to be uncovered.

Morag Cross is an independent researcher and archaeologist, specialising in histories of buildings and land ownership. Her archival research explores the unexpected links between previously unknown figures, especially women, and their social networks. She has worked on over 80 projects including business histories for the Mackintosh Architecture website, Glasgow Council’s official WW1 website, M74 industrial archaeology research, and Edinburgh’s India Buildings, Victoria St.