Conjuring up the Fairy Queen: The Art of Anne Carrick

If you’ve ever visited Smailholm Tower, it’s likely that you encountered these little dolls, depicting scenes from Sir Walter Scott’s works. Uncover the artist behind of one of our more unusual collections.

“There’s always a hint of magic in the ballads.” These were the words of Anne Carrick, Scottish Borders artist and maker of a set of costumed figures at Smailholm Tower. The ballads Anne referred to are the works of Sir Walter Scott, whose ‘Minstrelsy of the Scottish Borders’ inspired this collection. 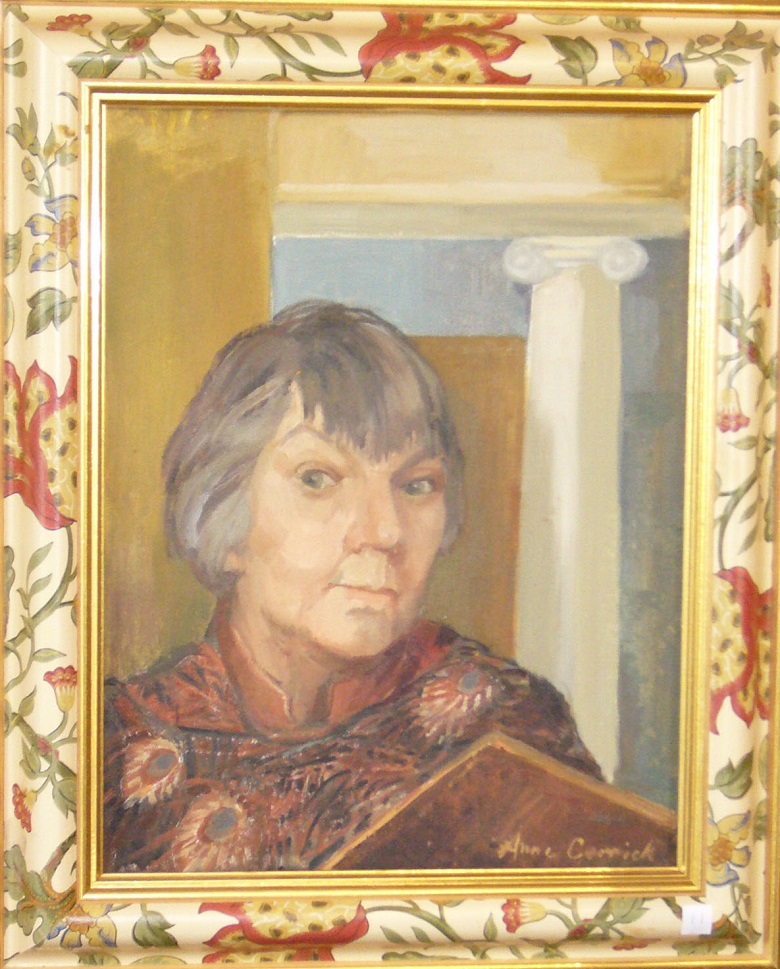 Anne Carrick self-portrait. Image shared with the kind permission of the family.

Who was Anne Carrick?

Anne Carrick was born in 1919 in Edinburgh. She came from an artistic family. Her father Alexander Carrick was Head of Sculpture at Edinburgh School of Art. He sculpted the Wallace statue on the Edinburgh Castle drawbridge. Anne was also influenced by her grandmother on her father’s side. She was a dressmaker from Orkney and she moved in with the family in her later years. She undoubtedly shared her sewing skills with Anne.

Anne started making costumed figures at the age of 12. She was especially fond of the historical romance novels of Georgette Heyer and this inspired the costumes and characters of her early creations. Her very first doll was the Duke of Avon – a tribute to the main character in Heyer’s novel ‘These Old Shades’. Even at this early age the detail she put into the figures is quite remarkable. However, if you look closely, you can see she had not quite mastered the skill of making fingers! 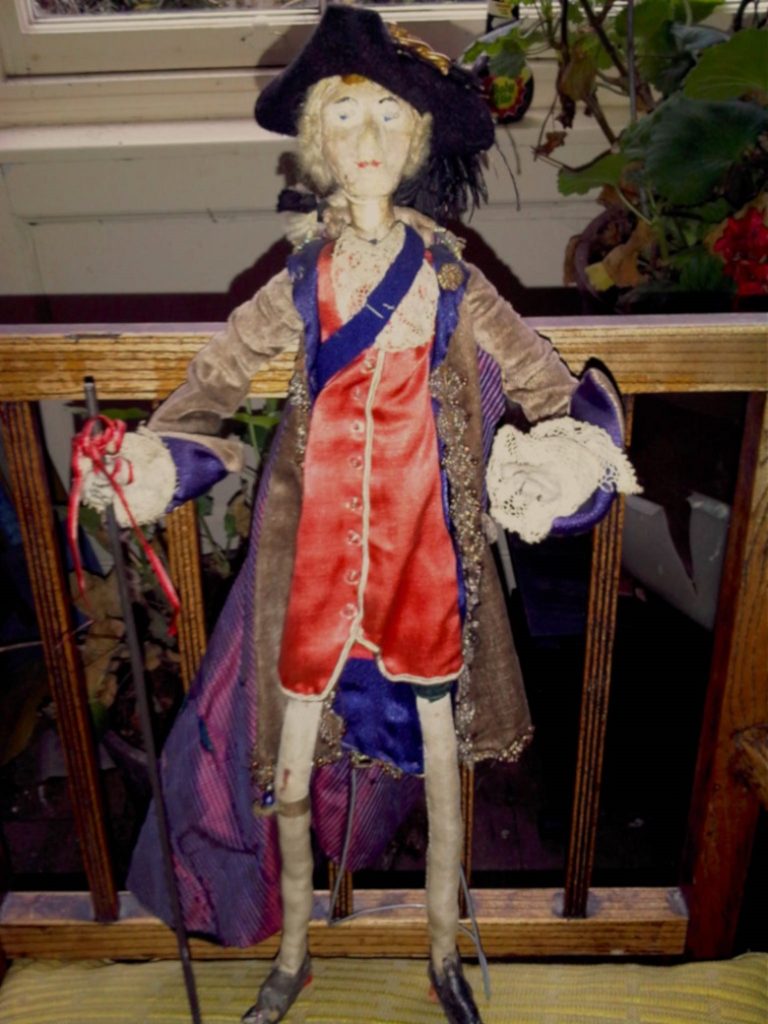 This is the first doll Anne Carrick made, aged 12. It represents the Duke of Avon. Image shared with the kind permission of the family.

In 1947, Anne moved to Melrose and continued to live in the Scottish Borders for the rest of her life.

The Smailholm exhibition was one of many exhibitions of costume figures which Anne created over a period of 20 years. Her first exhibition took place in 1963 at the Edinburgh International Festival.

In 1971, Anne started creating figures from Sir Walter Scott’s tales to celebrate the bi-centenary of his birth. 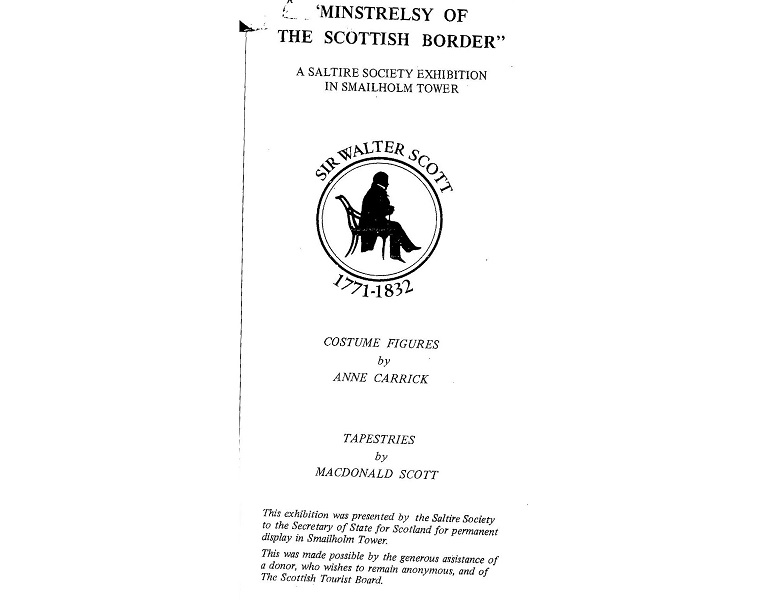 The leaflet from the original exhibition. Image supplied by Anne’s family. 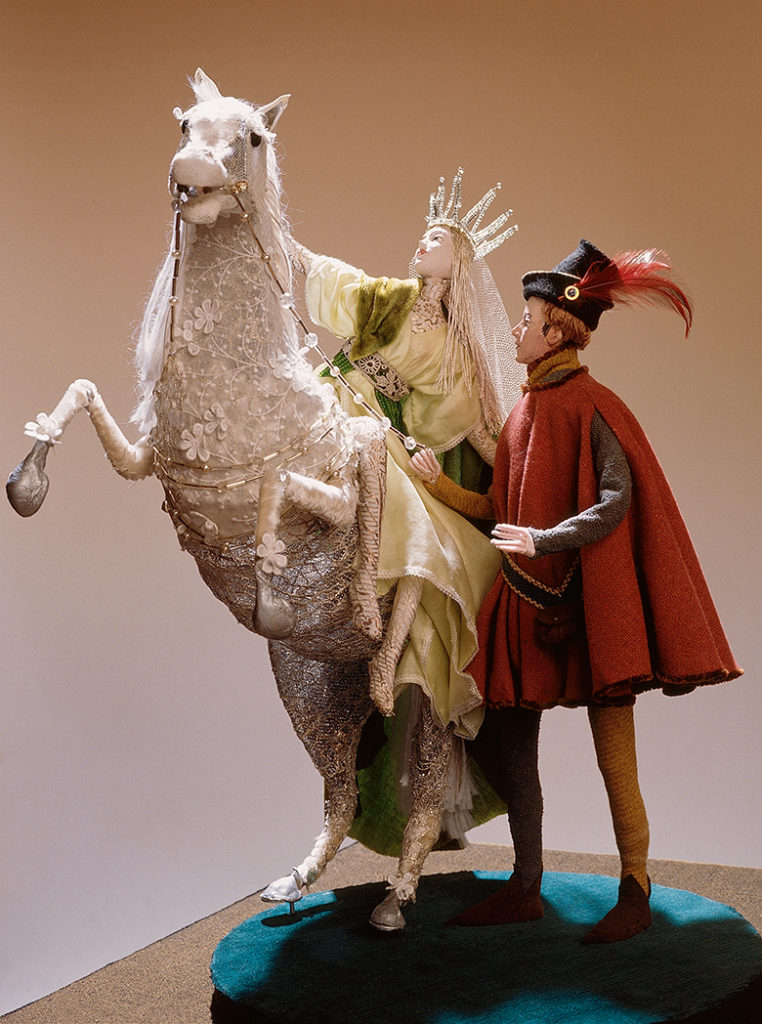 Artwork depicting Thomas the Rhymer. In Walter Scott’s tale the hero was carried off by the Queen of Elfland.

Among these documents were Anne’s own words detailing her inspiration for the exhibition:

While working on an exhibition ‘The character and countryside of Sir Walter Scott’ to commemorate the bi-centenary year, it became clear that much of the inspiration for his later work sprung from ‘The Border Ballads’ so it became that ‘The Border Minstrelsy’ was the theme for our next exhibition.” 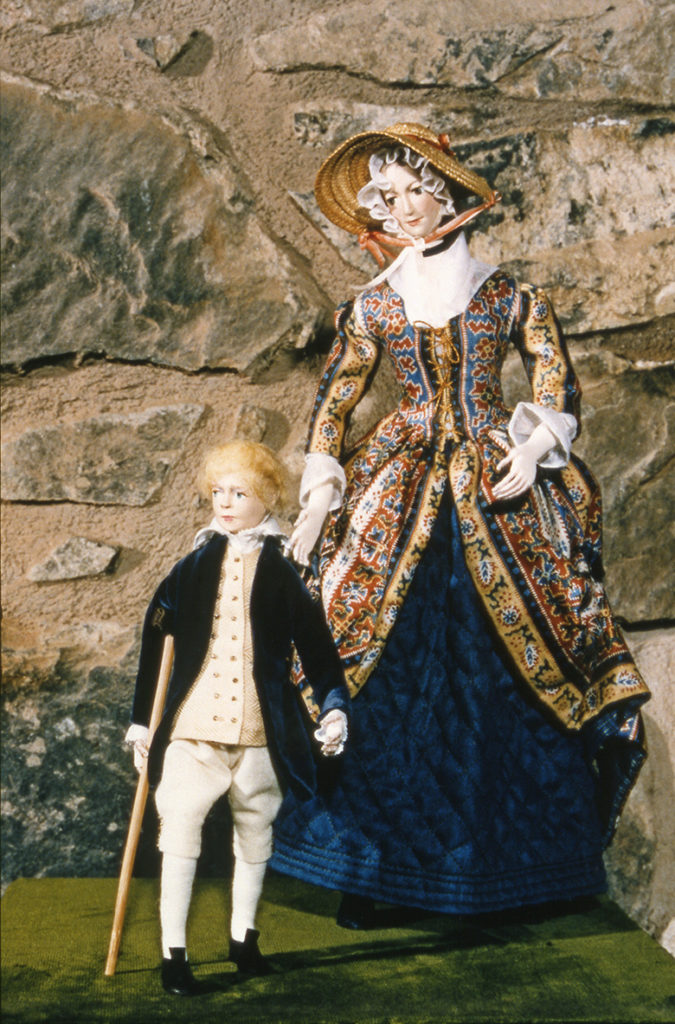 Walter Scott depicted as a child. Beside him is his Aunt Janet who entertained him with Border tales and songs.

The actual date of the installation of the figures is recorded in an extract from Anne’s diary on 4 June 1983:

The ‘Ministry’ van… arriving at 9.30 to be loaded with pedestals and cases… the next lot the Perspex cases and five van loads later completed the fitting… manhandling the cases up the stairs with care and patience and I’m afraid some bruised knuckles”

For anyone familiar with the narrow winding stair at Smailholm Tower, the installation of the exhibition was indeed quite a feat!

This day was made more memorable for Anne by the arrival of a grandson: 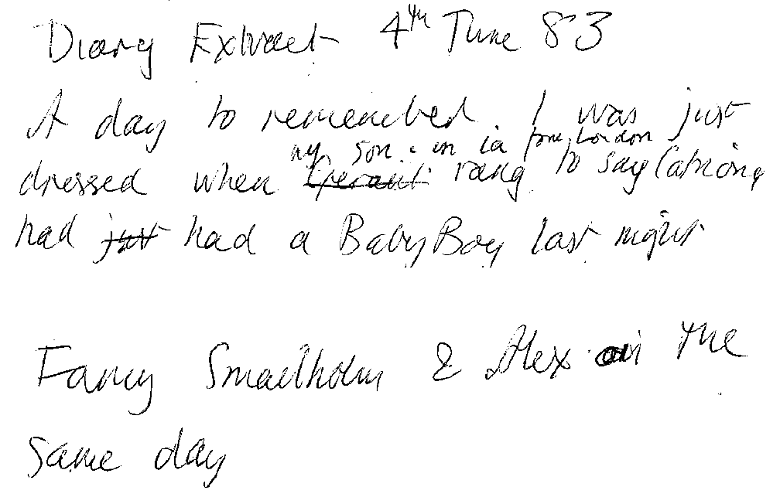 The entry from Anne’s diary.

Anne’s letters show she had fond memories of Smailholm Tower from her earlier years in the Scottish Borders:

I first knew Smailholm soon after we came to the borders as a good place to roll eggs at Easter. In those days…it was high and empty with the wind rushing through it…”
– A letter from Anne Carrick to a former steward at Smailholm Tower.

How did Anne make the figures?

Making the dolls was very skilled and intricate work. Her son estimates that Anne made over 2,000 dolls in her lifetime! He’s shared with us the techniques that she used. It requires a lot of skill and patience and some specialist materials. If you’re looking for a project, this could be a great way to stay occupied right now! 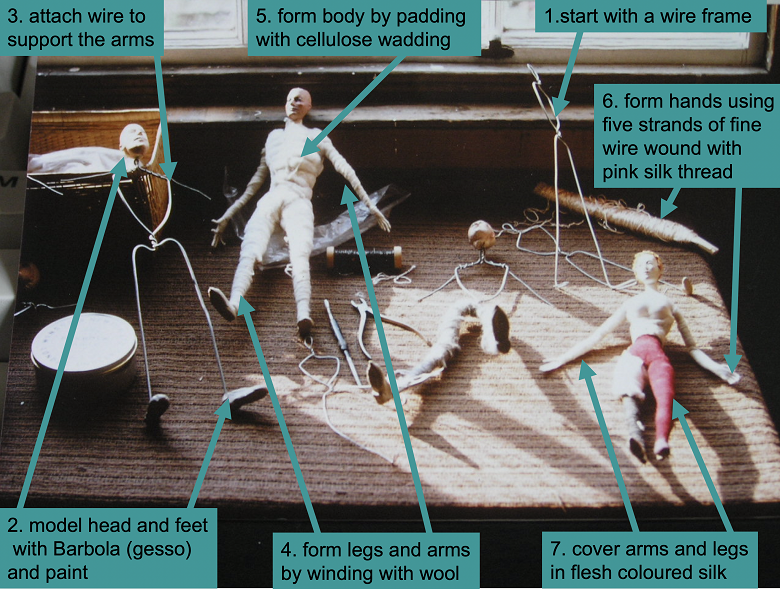 Anne had a good knowledge of the art of sculpting due to her father’s work. To make the figures she adapted the sculpting process.

Using this technique, Anne created a doll that was firm enough to stand on its own and pliant enough to be bent into expressive poses.

For the costumes, Anne chose the type of materials that real people would have worn. This included velvet, cotton and leather for the shoes. This attention to detail and the layers of clothing that they wear (including detailed underclothing) illustrate Anne’s talent and makes her figures eerily lifelike. In the Collections Unit this eery quality does seem to divide opinion on the figures. I will leave you with an image of my favourite figure. 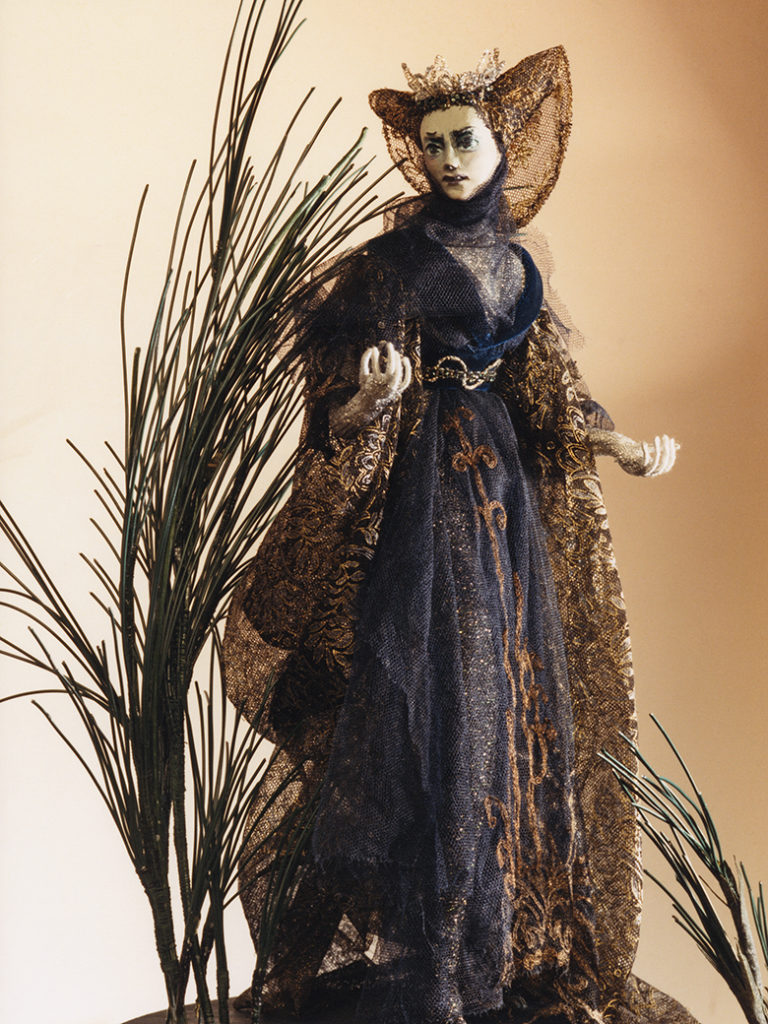 The Queen of the Fairies.

Jill works in the Collections Unit and is responsible for the care of objects associated with properties in south-east Scotland. This includes documentation, collections care, research, displays and exhibitions and risk management. She is based in Edinburgh, but spends a lot of time out and about at the properties in care. View all posts by Jill van Millingen