What can a stack of 200 year old directories from Trinity House in Leith tell us about life in Edinburgh between 1774 and 1842? Inga Edwardson, our Collections Management Trainee takes a look…

Last November, I spent a week in Trinity House, headquarters of the Incorporation of Mariners and Shipmasters since 1816. As a trainee in the Collections Unit, I was there to audit the library.

Unsurprisingly, the books mainly covered maritime topics and local history. But then I stumbled upon three directories from 1774-5, 1836-7 and 1842-3. They immediately piqued my interest and I quickly searched for family names. Sure enough, after some investigating, I found some possible ancestors from my grandmother’s family! This connection encouraged me see what more I could learn from the directories. 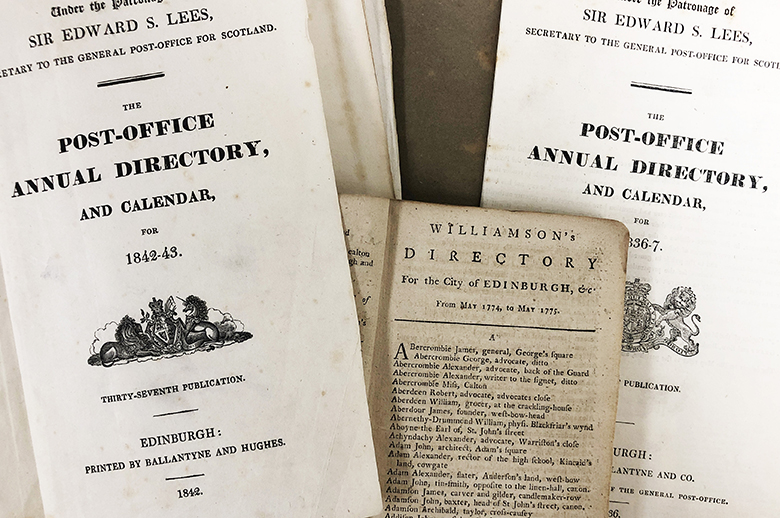 What is a directory?

Much like the ‘phone book’ (now a bit old fashioned itself!) the directories list residents of Edinburgh & Leith alphabetically by surname or street and include their occupations. They also have calendars, advertisements, coach service information, street maps, etc. To be listed you had to pay a small fee, so working class people, labourers, and servants were rarely represented. Lots of women were left out as only the ‘head’ of the household was recorded. So, the directories show a skewed version of Edinburgh – a glimpse not the whole story. However, they still help us understand the social history of Edinburgh & Leith.

Many of the jobs are familiar – fishmonger, surgeon, dressmaker. Others are less ordinary…

Dancing masters were members of high society who taught dance and etiquette. Many became famous, celebrated for their skills. In Edinburgh they would’ve taught traditional ceilidh. I’m sure James would be happy to know that ceilidhs are still going strong in Edinburgh, with dozens being held each month. 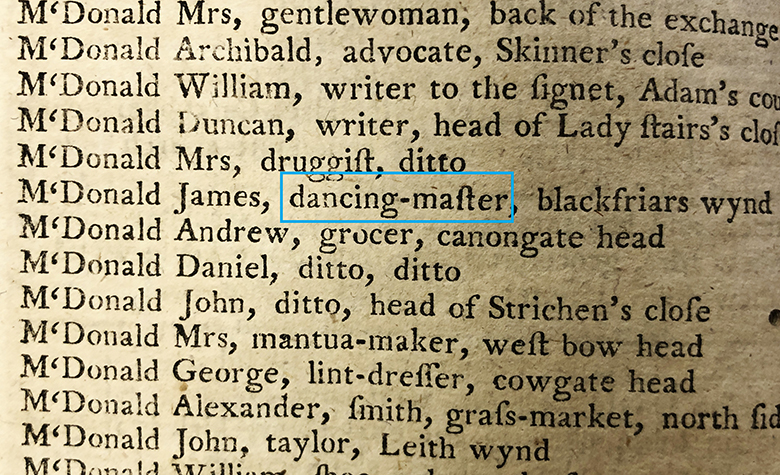 John didn’t wear a red coat and big hat while making announcements on behalf of the monarch or government – there is no tradition of this in Edinburgh. John was a ‘common crier’, meaning he could be hired by anyone to deliver a message or shout advertisements. This was an important job in the days before telephones and when many people couldn’t read.

Trades are reflected in the streets of the Old Town – Shoemaker Close, Fleshmarket Close, Bakehouse Close. Other links are less obvious… Two people are listed at Thorny Bauk, both ‘cowfeeders’. This makes more sense once you know that ‘thorny bauk’ is Scots for ‘thorny field’. 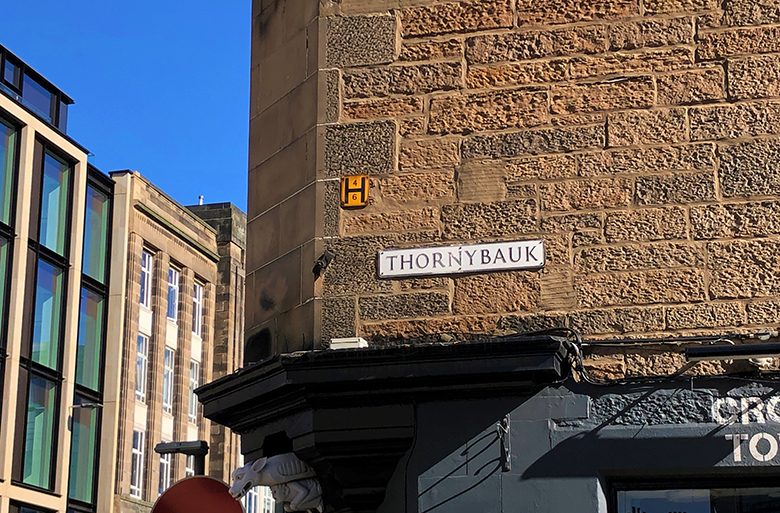 The Thhornybauk area of Edinburgh lies just off Lothian Road.

The brewing industry in Edinburgh was huge in the 18th and 19th centuries. While Edinburgh’s moniker ‘Auld Reekie’ is a reference to the city’s smoke pollution (‘reek’ meaning ‘smoke’ in Scots), the pungent smell created by the breweries probably helped cement the nickname for English speaking visitors and residents! Usher & Co is one of dozens of breweries listed. The Usher family were also successful distillers and spirit merchants, and they went on to fund the Usher Hall in 1914. Similarly, the McEwan Hall was built by brewer William McEwan in 1856.

David Hume (1711-1776) was an influential philosopher and an important figure of the Scottish Enlightenment. Hume spent his final years living on what is now St David Street. A likely theory is that this street, originally St Andrews Street, was renamed after Hume. 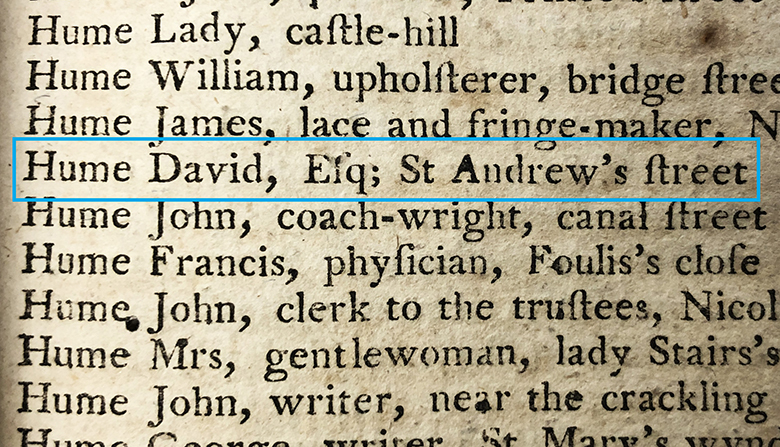 John Adam (1721-1792) was a well-known architect. His address is listed as ‘Adam’s Square’– this is no coincidence. He designed the development of townhouses himself. They were demolished in the 1870s, but in 1954 the University of Edinburgh built Adam House on the site. Fittingly, it houses studios for architecture students.

Where are the Women?

I was immediately struck by the small number of women listed in the directories. If recorded they had no first name, just limited to ‘Miss’, ‘Mrs’, or ‘Lady’. This makes it difficult to find specific women. Often, we can only identify them through a record of their husband, son, or father.

The leading abolitionist and suffragist Eliza Wigham (1820-1899) is represented by her father, John. She and her stepmother Jane established the Edinburgh National Society for Women’s Suffrage. In 1863 Eliza wrote The Anti-Slavery Cause in America and its Martyrs, hoping it would influence the British government to oppose the pro-slavery Confederates during the American Civil War. Eliza was one of hundreds of activists who were challenging the very discrimination that kept them out of the directories. 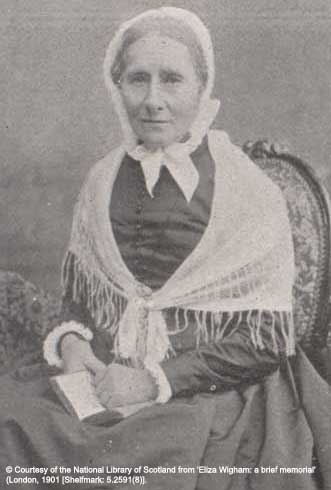 Eliza Wigham was one of Edinburgh’s leading citizens, but she didn’t have her own entry in the directory.

The successful actor Harriet Siddons (1783-1844) is listed in 1836-7, as her husband Henry had passed away making her the ‘head’ of the household. Harriet was the manager of the Theatre Royal Edinburgh and the first to adapt Walter Scott’s works into plays. King George IV was in the audience for her 1822 production of Rob Roy. 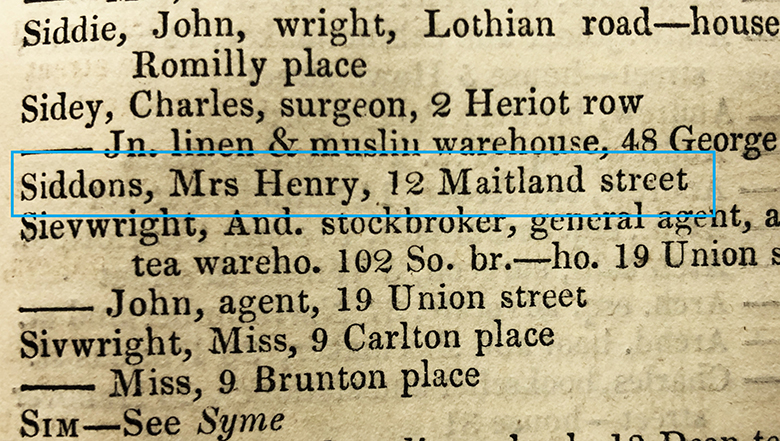 To learn about more women side-lined from Scottish history, why not read Where are the Women? A Guide to an Imagined Scotland by Sara Sheridan.

Reading through these books in the historic Trinity House library gave me a glimpse of the people who lived in Edinburgh hundreds of years ago. This was a privileged opportunity, and, I hate to be so cliched… but it felt like I had been transported back in time. 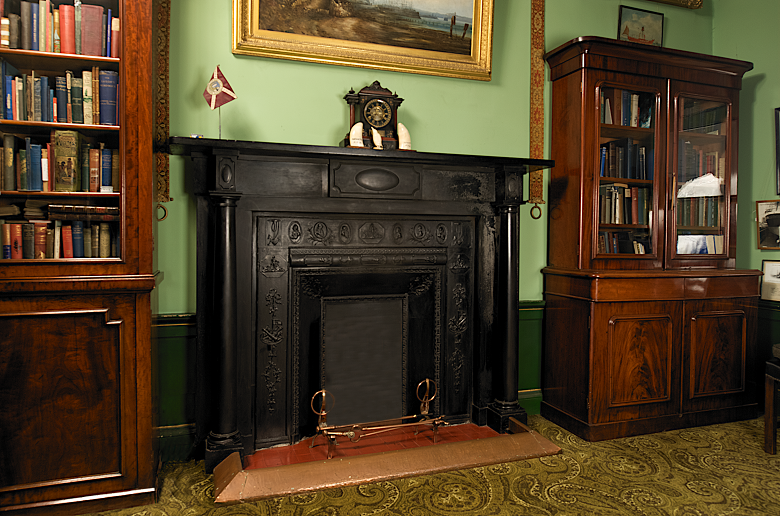 The Master’s Room at Trinity House includes a small library where the directories are stored.

Find out more about the history of Trinity House.

You can search digitised copies of directories from 1773 to 1911 on the National Library of Scotland website. 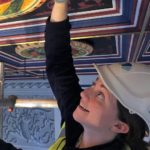 Inga is a Trainee in the Collections Team, and spends her time researching, documenting, and caring for our collections. She comes from an archaeology background and has a particular interest in Scottish prehistory, social history, and material culture.