What is Postmodern Architecture and why do people love it? Diane Watters uncovers some of Scotland’s most innovative designs.

If you were asked to name your favourite building in Scotland, what would you choose? Would it be a stately castle, a dedicated design museum, or something slightly more functional? Four years ago, a shopping centre in Glasgow was crowned Scotland’s ‘favourite building’.

Princes Square is a popular Postmodern shopping precinct designed by Hugh Martin Partnership in 1986-7, set behind a mid-nineteenth century listed façade. When it won the award, it was only thirty-years old. So what is Postmodern Architecture, and why do we find it so interesting?

What is Postmodern Architecture?

Postmodernism is not a set style in the same way as Gothic or Classical architecture. In fact, it is characterised by stylistic diversity – a bold mix of old and new.

The top-lit five-storey Princes Square is set behind the listed nineteenth century façades. Postmodernism’s ‘sensitive’ relationship with heritage was often exploited for city centre commercial projects in the 1980s. 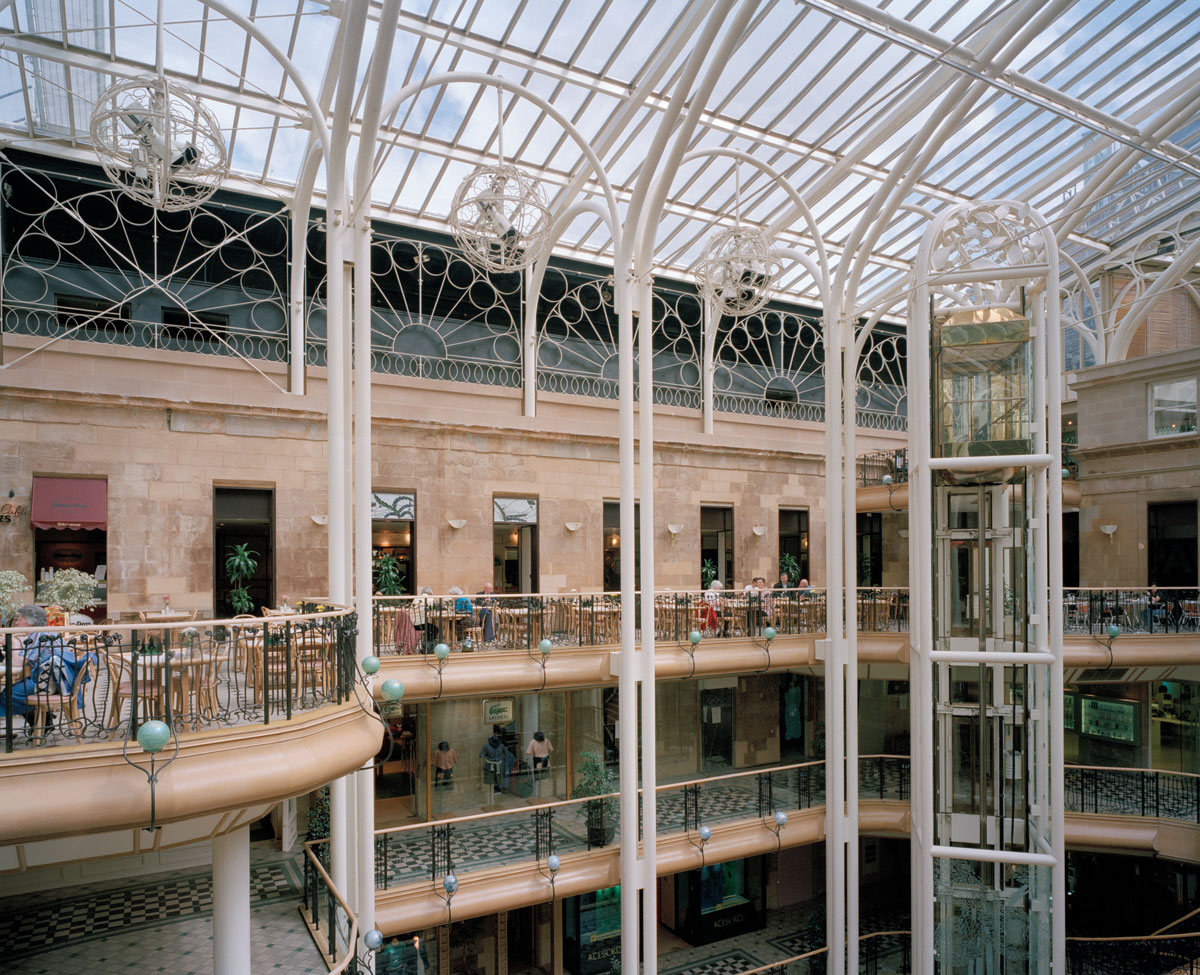 Postmodern Architecture was part of the wider cultural movement across philosophy, literature and the arts that began in the mid-to-late 20th century. It was the beginning of a move away from the rigid, functional architecture of the modern era towards something more more image-led and stylistically popular.

Instead of deferring to internationally recognised Modern Movement rules, Postmodernism openly flouted them. Where Modernist architecture embraced minimalism and focused on the function of buildings, Postmodernism was varied, quirky and individualistic.

This image from our HES Archives, taken in the 1970s, shows reconstructed seventeenth and eighteenth century townhouses and tenements on the High Street of Dysart in Fife. The Architects, Wheeler and Sproson, were pioneers of replica re-builds in the early 1970s. In Scotland, the economic downturn and crisis of 1979 closed many architectural practices. But by the late 1980s, new pioneering practices were being formed. The architects’ client-base shifted increasingly from ‘public’ (the state and local authorities) to ‘commercial’ projects (shopping, leisure, and culture). Private practice boomed.

In  architectural culture and design there was a significant shift from the social welfare collective ethos to that of individualism. In contrast with the regional planning of the post-war era, Scotland’s cities in the 1980s and 90s were now in competition to be cultural and commercial centres.

Now demolished, the Olympia Pool and Leisure Centre in Dundee was a bulky modernist block at its core, but also an example of a new ‘playful’ design in civic leisure projects. 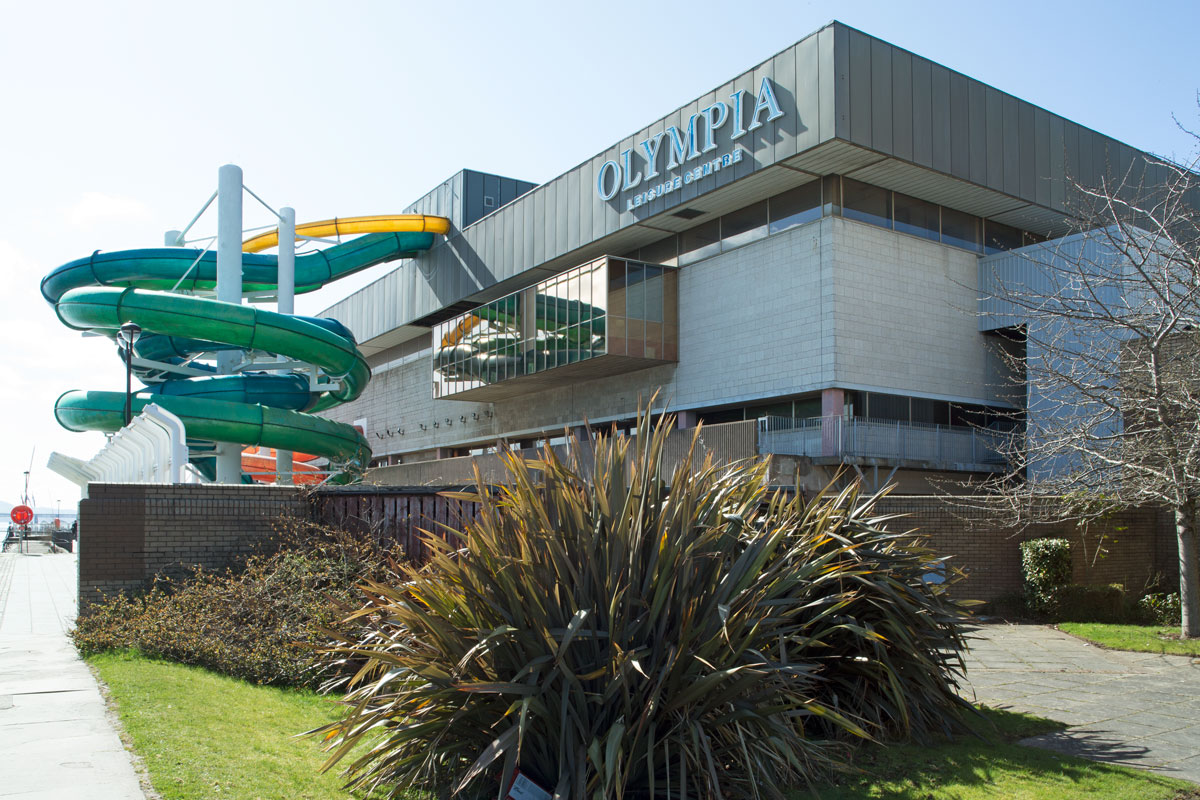 There were new ambitious public projects, redevelopment of historic centres, and housing refurbishment and regeneration in residential areas.

This period also saw the introduction of the historic building preservation movement, with vocal anti-Modernist views of 1960s concrete heritage. 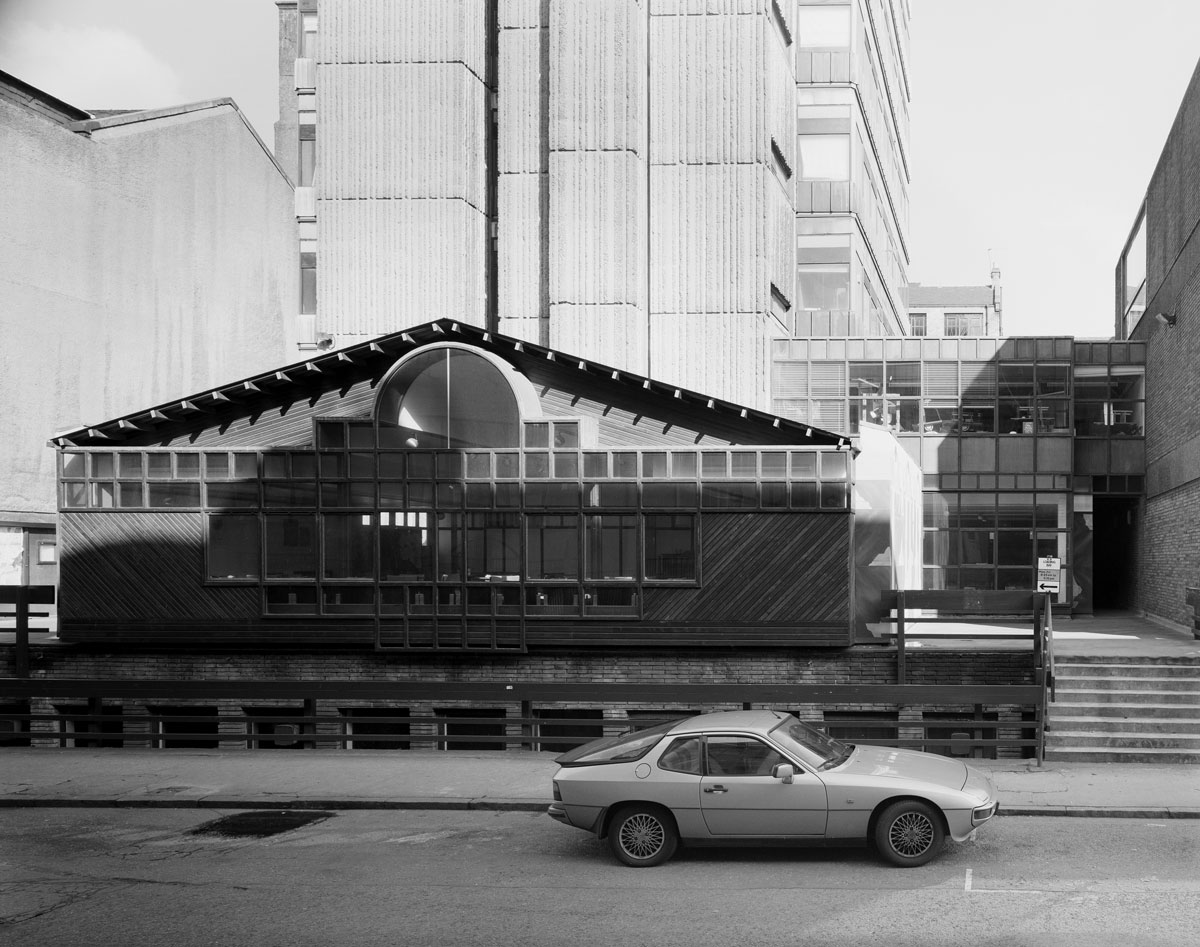 Designed by Gillespie, Kidd & Coia, the quirky postmodern extension to the Newberry Tower was demolished in 2010

Postmodernism revived historical building styles, but no period or style of architecture was now privileged or copied slavishly. Some were favoured, including art deco and classicism. However a preoccupation with Scotland’s own traditional built forms (the castle) and the works of the ‘great master’ (architect Charles Rennie Mackintosh) had a direct impact on the visual language of architecture in the 1980s and early 1990s.

These home-grown stylistic revivals were part of a broader cultural self-reflection on Scotland’s national identity post-Thatcher. They were fostered, in part, by a growing desire for political change through devolution. By the mid-1990s Scottish architecture adopted a Neo-Modernism style. Ironically, this was a revival of the stark Modern Movement style of the 1950s-60s which Postmodernism had originally reacted against. In April 2019, we began a small-scale survey at HES to record and research postmodern places from 1975-1990s. It was our response to a pressing need to tackle a period of increasing interest to historians of architecture, heritage professionals, and, as the 2017 award illustrated, the general public.

We are pro-actively recording surviving buildings that are significant and representative of the post-1975 period. Our approach involves detailed photographic surveys and archival research. The escalator hall in Cumbernauld Town Centre, completed in 1981

Why record such recent history now?

Contemporary architects have promoted Postmodernism and Neo-Modernism, and attempted international overviews of its development. But we’re conscious there has been no targeted study devoted to this movement in Scotland. Given the fact there are extensive political and social histories of Scotland in the 1970s, 80s and 90s, we feel a more detailed study of Scotland’s post-1975 building and sites is long overdue!

Our survey has several aims. We want to: Our work will add Scotland’s disappearing post-war Modern Movement era to the National Record of the Historic Environment, and may even inform our future collecting practice.

We will continue to carry out some threat-based recording too. We’re working to establish what building types are currently under threat, and where appropriate we will survey them.

In the first year of the project we focussed on education buildings: chiefly schools, colleges, and universities.

In the 1980s and 90s, architects strove to design more complex models. They wanted to develop new ideas of place, community, and identity in places of teaching. Postmodern school architecture abandoned the spaced-out, functional planning of Modern Movement schools. Instead, schools were designed more informally, with enclosed ‘street life’ and covered courtyards. The educational sites we have selected for survey as part of this project include:

Further and higher education sites we have already surveyed include prestigious new-builds and contextual ‘in-keeping’ expansions. These include:

We’re still in the early phases of this project, but our second year survey year will focus on recreation and commercial building types. Opportunity for a Postmodern Enthusiast

In collaboration with the University of Edinburgh, we’re currently inviting applications for an Arts and Humanities Research Council (AHRC) funded PhD. This full-time post will focus on post-1975 Scottish architecture and planning.

If you’re a graduate or postgraduate architectural historian, social historian, and/or urban historian we’d strongly encourage you to apply by 11 May 2020.

Diane M Watters is an architectural historian at Historic Environment Scotland. She is the Project Manager of the post-1975 Survey and Research project. View all posts by Diane Watters