Collections, Year of Coasts and Waters

The origins of Trinity House can be traced back to the establishment of a seafaring fraternity in 1380, later known as the Incorporation of Mariners and Shipmasters.

Their purpose was to provide support to those who had been injured or retired from life at sea. The organisation commissioned an ‘almshouse’ or hospital on the Kirkgate in Leith in the 1550s.

Today a maritime museum stands on the same site. It’s housed within a grand Georgian building commissioned by the Masters of Trinity House in 1818. 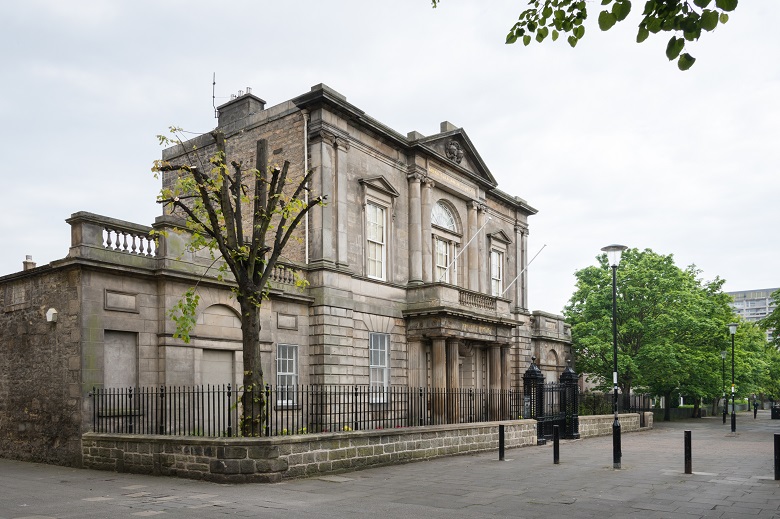 The majority of the objects that make up today’s museum collection were collected by members of Trinity House. This includes paintings, furniture, navigational equipment, seafaring curiosities and memorabilia.

You may have come across some of our popular collections on social media channels in the past. Our carved penguin figure is an old favourite!

Our painted whale eardrum recently made the news when curator’s shared their “creepiest objects”. It’s listed as one of the top 10 objects searched for on Art UK’s website during the lockdown

But Trinity House boasts many more fascinating items to be explored… 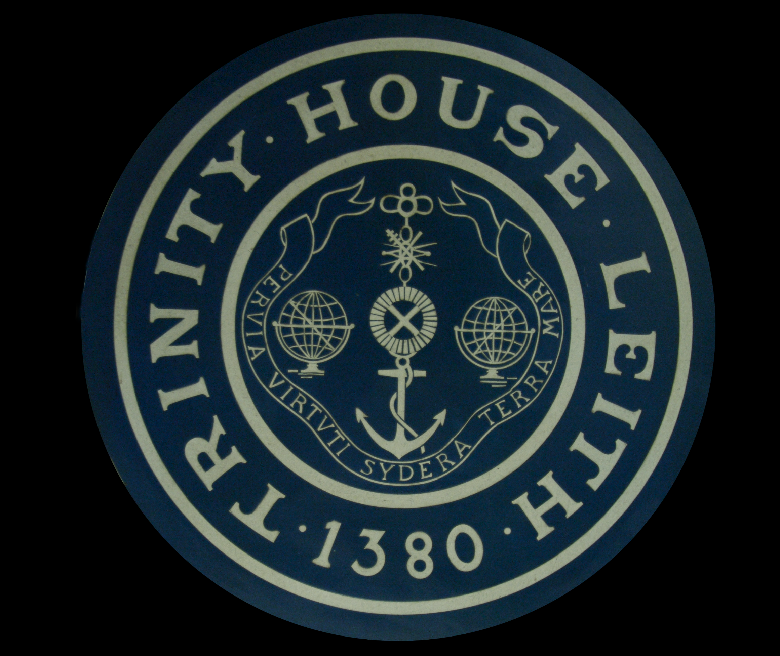 2020 marks the 100th anniversary since Leith amalgamated with Edinburgh. Between 1833 and 1920 it was an independent burgh, with its own provost, magistrates, and council.

This chain of office was made in 1901 and was worn by the final three Provosts of Leith. Seen suspended from the chain is the pendant of the Leith Dock Commission, who took over the management of Leith Docks from the City of Edinburgh in 1826.

Trinity House had representatives on the Commission, and the chain continues to be worn by the Master of Trinity House today on special occasions. 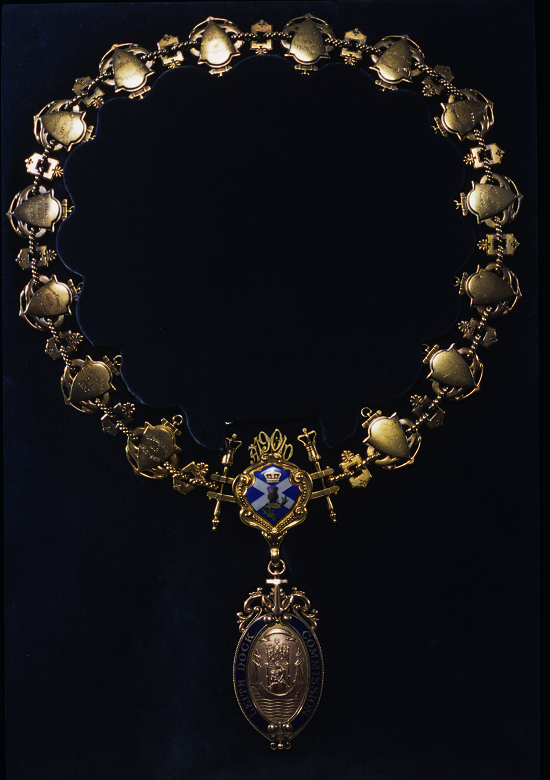 Tucked away inside a wall mounted mahogany cabinet are seven teaching maps depicting the Baltic, West Indies, Mediterranean Sea, Great Britain and Ireland, America, the North Sea, and England and the Cape.

The names of the maps are engraved on the cabinet, and each map slides down individually by pulling down a little handle.

All the hand-coloured maps were printed around the same period of the early 19th century. At this time, Scotland’s maritime trade was extensive, benefiting from the international reach of the British Empire and its involvement in the Transatlantic Slave Trade System.

Six of them are maritime charts, with the exception of the Americas, which shows interior land and physical features.

This map was made in 1809, not long after the War of American Independence. It shows the thirteen States which constituted then newly formed United States along with the French possessions of Louisiana and Lakes area and British Canada. 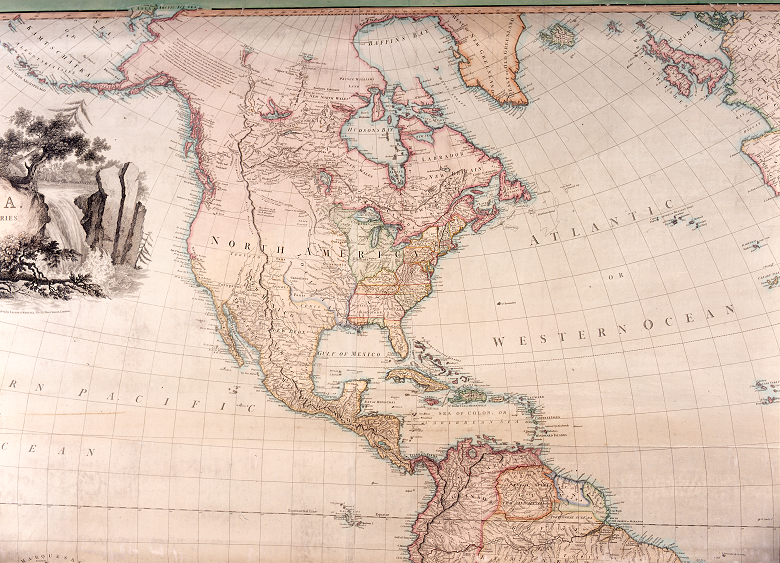 Trinity House actively supported the churches of Leith, and members contributed towards the costs of both the North Leith and the South Leith churches.

This bronze church bell was cast by David Hodge in 1738. It once rung out from North Leith Parish Church, which originally stood on Quayside Street.

The church moved to Madeira Street in 1816, but the bell remained in the original church tower until the 1940s. 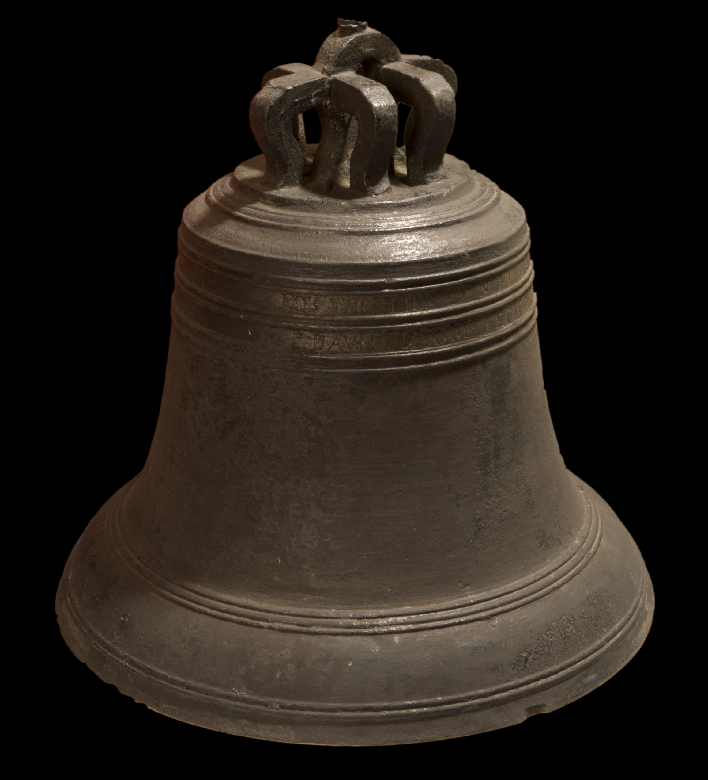 On the (time) ball

Accurate time keeping was important for navigation, and time balls were used to provide sailors with an accurate visual time signal. These drawings from the 1840s formed part of a proposal for a time ball to be erected on Calton Hill in Edinburgh.

A time ball was installed at the top of the Nelson Monument on the hill in 1852. The ball dropped at exactly one o’clock each day. This allowed ships in the surrounding area to check the accuracy of their chronometers (a time keeping device).

Unfortunately mist and fog sometimes meant that the ball was not visible, and so an audible signal was also required. This led to the introduction of the daily firing of the one o’clock gun from Edinburgh Castle from 1861. Both signals continue to operate at one o’clock each day. 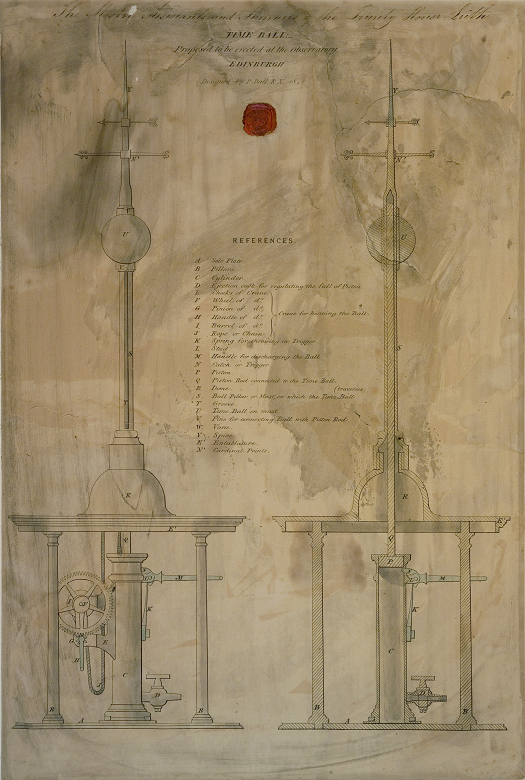 The Spirit of the Storm

“Vasco de Gama encountering the Spirit of the Storm” measures over 5 meters wide and 4 meters high. It’s difficult to miss if you’ve ever visited Trinity House!

Painted in 1842 by Edinburgh-born artist David Scott, it depicts Portuguese explorer Vasco de Gama discovering the passage to India around the Cape of Good Hope (off southern Africa) in 1497.

The painting has darkened over time due to layers of varnish discolouring. Cleaning trials in some areas have revealed the original colours underneath.

The picture was placed in Trinity House in 1849. It was purchased by public subscription, the first painting in Scotland to be acquired this way. 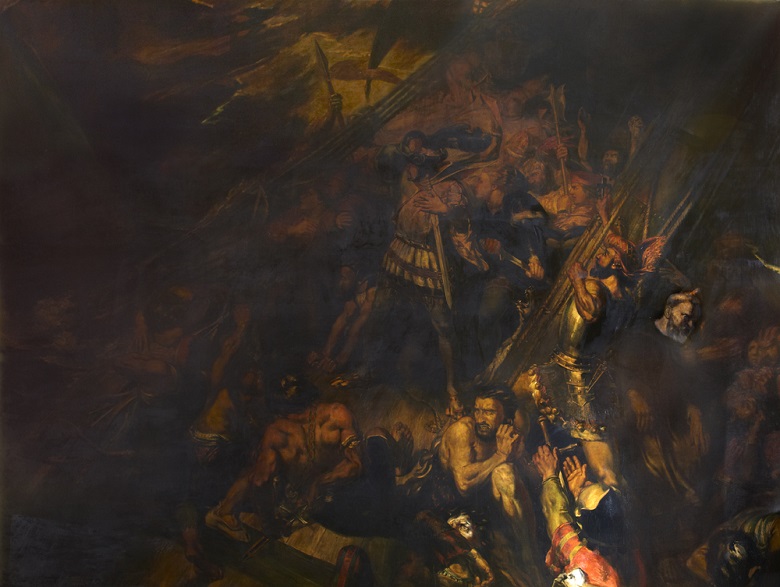 Has this virtual trip to Trinity House inspired you to do a spot more seafaring?Check out our brand new online exhibition created especially for Scotland’s Year of Coasts and Waters.

It tells the story of our amazing coastal places, from the coastal homes of our ancient ancestors to the booming seaside tourist industry.