The Sound of Architecture

The German philosopher Goethe said ‘music is liquid architecture’. But what would a building sound like? Composer Tree Burton has been finding out…

As a composer I’ve always been fascinated by music’s relationship to the visual arts, particularly architecture. When I was a teenager I started to suffer from profound hearing loss which influenced the way I approach my work. As my hearing has become impaired, my interest in the visual world of light, materials, texture and colour has grown.

I’m keenly drawn to post-war architecture. In this regard I’m lucky, as Scotland has many beautiful buildings from this period! The attraction is partly due to the sculptural qualities of concrete and the manner in which they manipulate light. 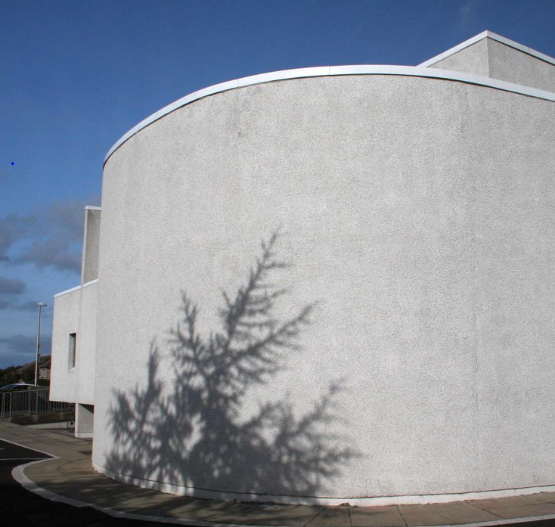 The concrete wall of Craigsbank Church has a sculptural quality

In 2014 and 2015 I was commissioned to write pieces for performance as part of Chicago’s Open House programme, their equivalent to our Doors Open Day.

Having seen how well visitors responded, I approached Edinburgh’s Cockburn Association to see if they would be interested in trying this for Doors Open Days here. They were keen and so for the last few years I’ve presented specially written works to be performed at different sites. 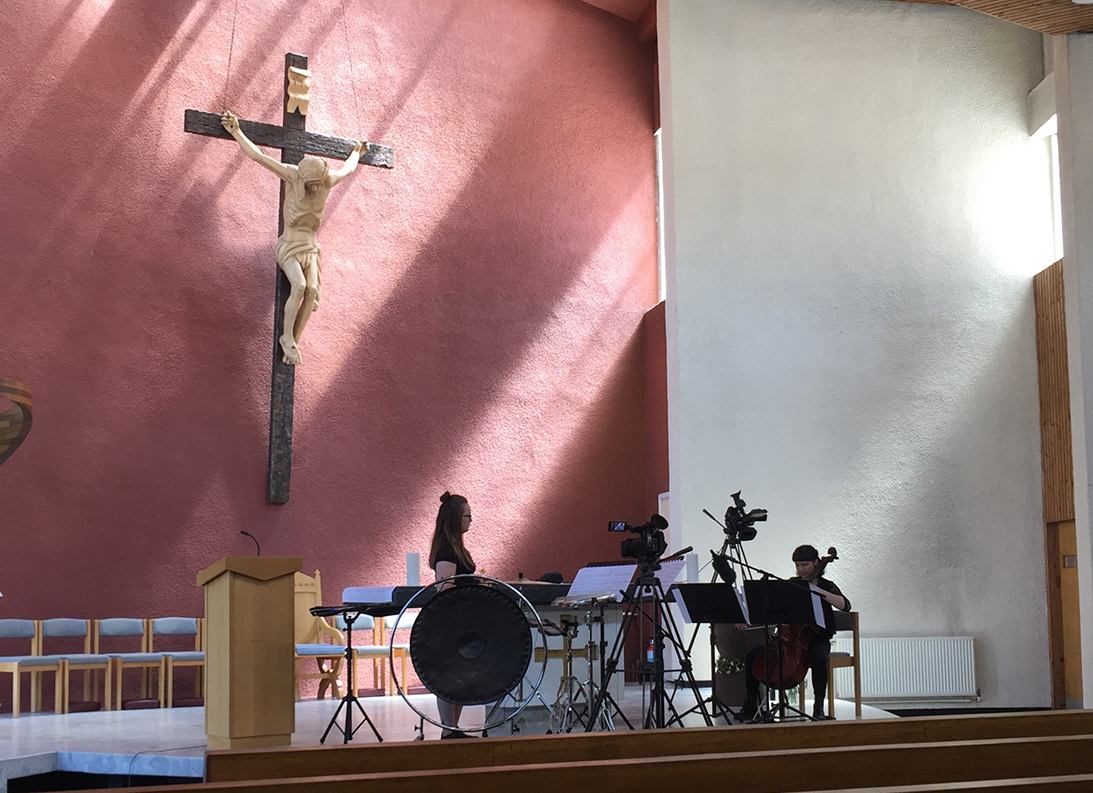 My work is heavily influenced by architectural materials, light and space. I try to record various effects at different times of day – and in different weather conditions. I can then prepare handouts for listeners pointing to how the music they’re hearing relates to elements of the building, whatever the weather or time of day.

Rising like an iceberg over the western suburbs of Edinburgh, Craigsbank Parish Church gleams in the light. This Category A listed building from 1964 is considered a late modernist gem in Scottish architecture.

My solo piece for cello begins at the long inclining entrance to the church with its tall bell tower. 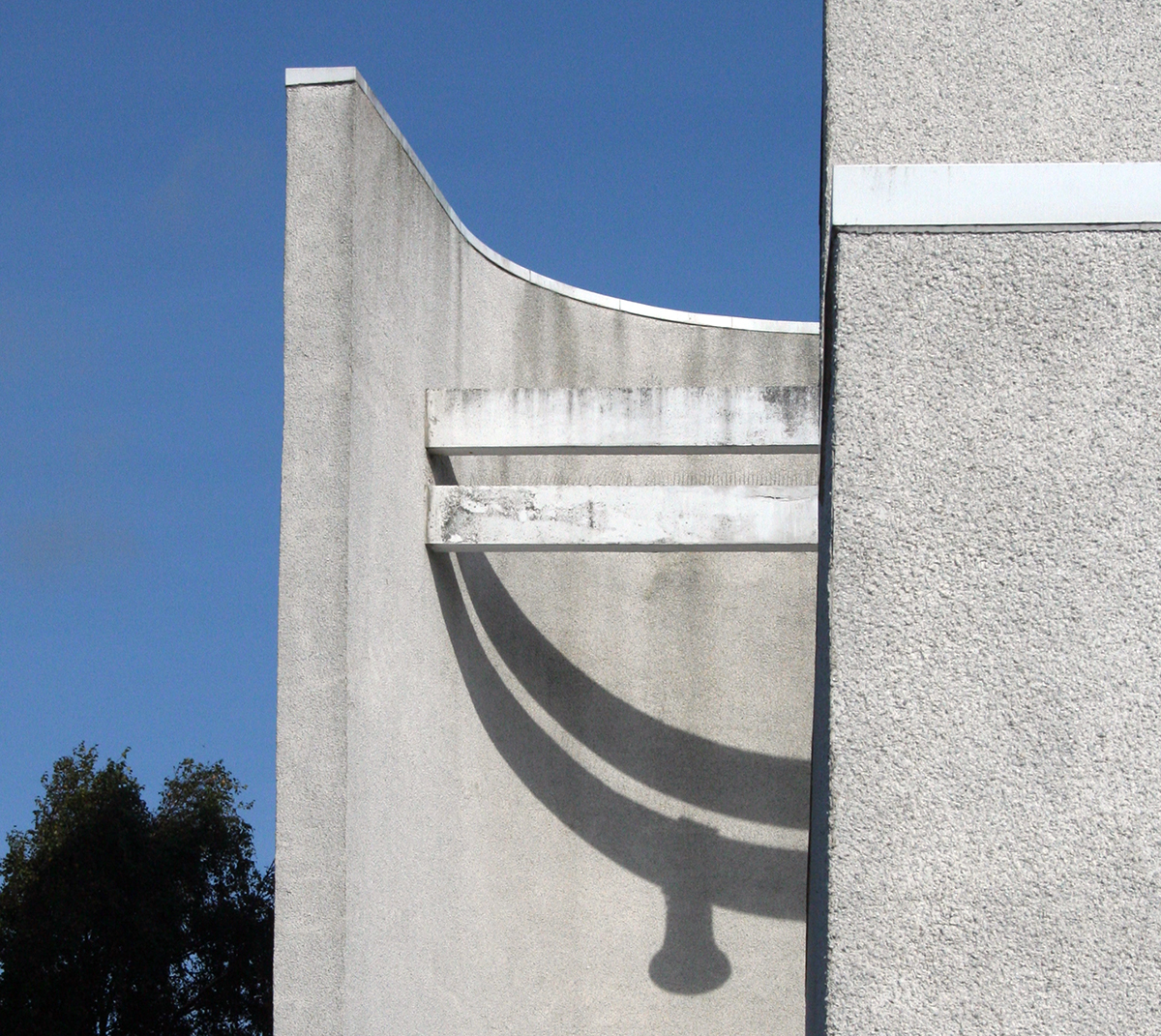 I was particularly attracted to the two straight beams at the top of the tower and their contrasting curved shadows. For these I have the cello playing glissando (sliding up or down the string). The range and speed of these are freely determined by the performer, but are played over a sustained drone on another string.

The free element here is designed to acknowledge that the curved shadows of the two lines are not fixed. The light impacts on their intensity and depth so, depending on the time of day, they look different.

I gained greater understanding of the church by looking at aerial photographs. These show its geometric plan, a square sanctuary cupped by the enclosing hands of two towers in opposite corners.  The transition from outside to inside is through one of these welcoming hands. I acknowledge this feature with a note in the lower register of the cello and increasing intensity of vibrato as we move from the cool exterior to the warmth of the sanctuary.

After exploring inside, I end the piece back outside. On a bright day the white walls are a canvas for other shapes and forms to take life. These include fleeting shadows of leaves and branches from neighbouring trees that dance on the side of the church, evoked by short flourishes and gestures over a sustained note.

This site-specific work was performed for the 3 Harbours Arts Festival in Prestonpans. This little known sculptural church is Category B listed and was designed by the firm Alison and Hutchison and Partners in 1965.

Influenced by the work of Swiss-French architect Le Corbusier, it is circular plan and enveloped in spiralling shells of rendered concrete walls.

Beams of white light from the vertical rooflights and horizontal side windows bend and reach across the curved end wall behind the altar. I depticted these thin, ethereal textures through a cymbal being bowed and harmonics on the cello.

Other sections of the piece reflect on elements like the shimmering coloured light that streams through a window designed by Scottish stained glass artist Crear McCartney, and the use of darker materials such as the black terrazzo floor and rich wood of the pews.

The most recent building I have written for is this beautiful chapel from 2012.

It sits quietly off Edinburgh’s Middle Meadow Walk in dappled sunlight, greenery and birdsong. When researching the building I had the pleasure to meet the lead architect Stuart Allan of Simpson & Brown Architects on site and talk through various details of the chapel.

To both of us it was a building of great rhythm, repeating lines, details and curves that are syncopated by light.

The opening focus of the piece on one pitch is meant to echo the uniform lines of oak. This allows you to concentrate on the different colours and textures.

Meanwhile pitch bends on the bass flute and glissando on the cello are referencing the curves in the wood. The fast repetition of single pitches parallels the way repeated lines of oak, so distinct when viewed up close, begin to merge into the distance. 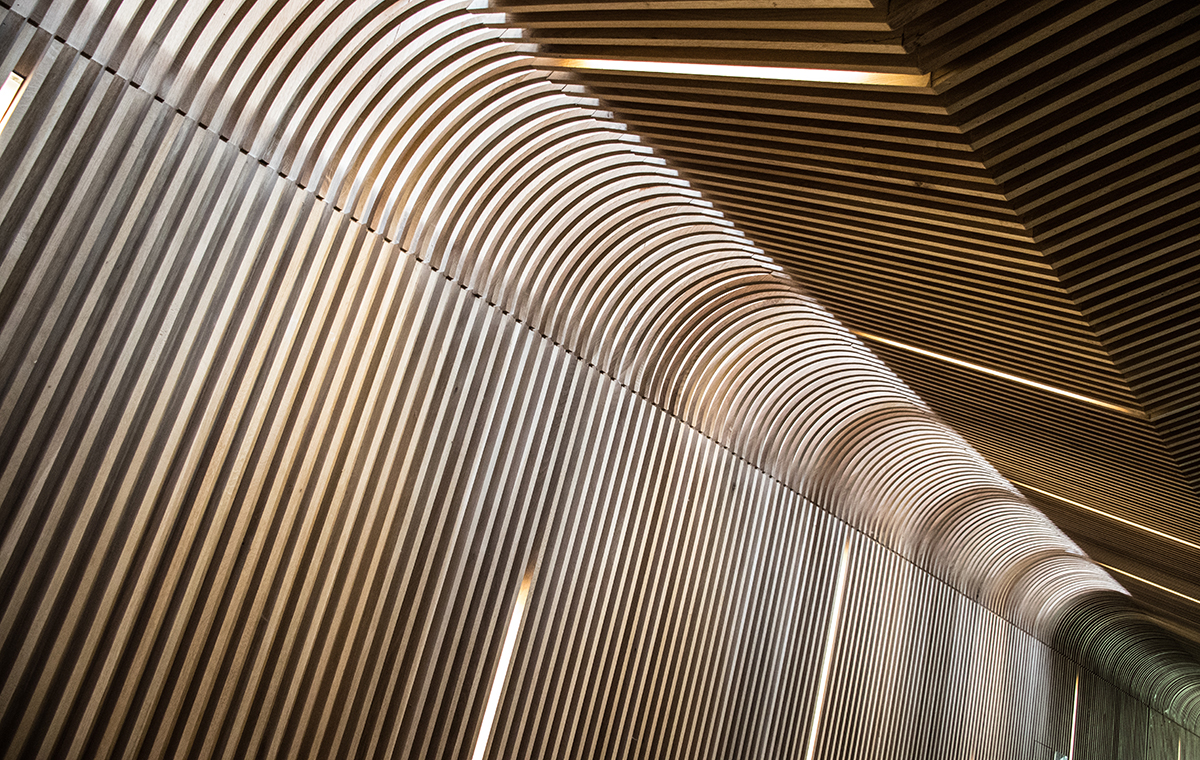 Both myself and the architect were particularly drawn to the chiselled notches on the sandstone wall. I focused on these repeated notches with percussive key clicks on the bass flute to evoke running your hand across the surface of the stone. 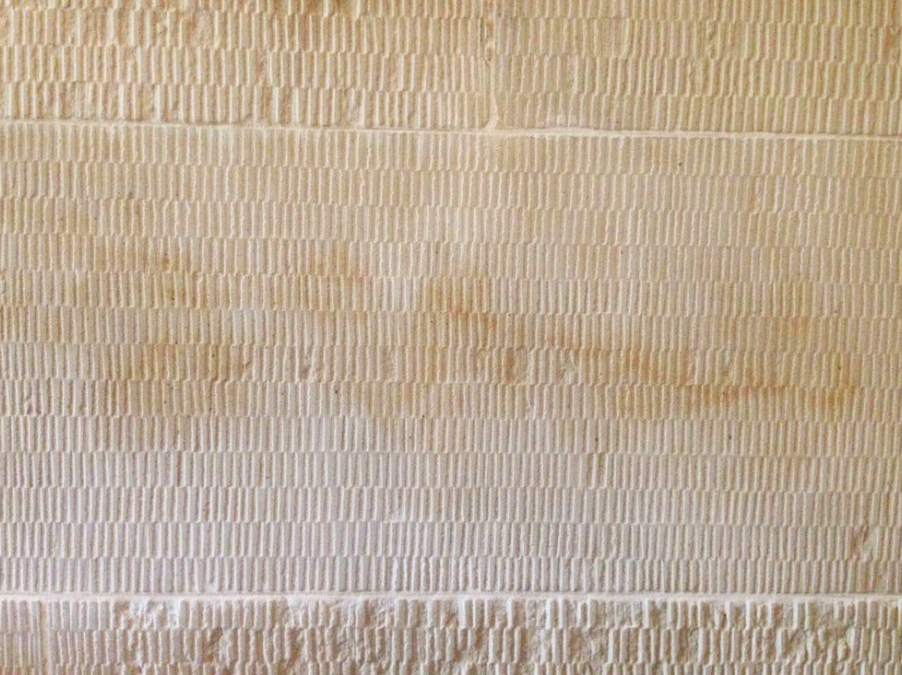 Chiselled notches on the sandstone wall

I explore the texture of the materials of the church further in examining the shape and feel of the corten steel tree-like columns.

The piece ends quietly as both players are given increasing freedom to explore the changing light as you pass through the building into its natural surroundings.

The styles of architecture I particularly like working with, such as brutalism and modernism, can evoke strong responses from people who see them every day. What some consider beautiful, others can see as an eyesore.

But people really seem to enjoy being able to wander around buildings as music plays, and having the chance to discuss it with the performers. I’ve found these performances have got people to engage with modern architecture and contemporary music.

If we can look afresh at these structures, see them in a different way, perhaps we can find something we didn’t see before. 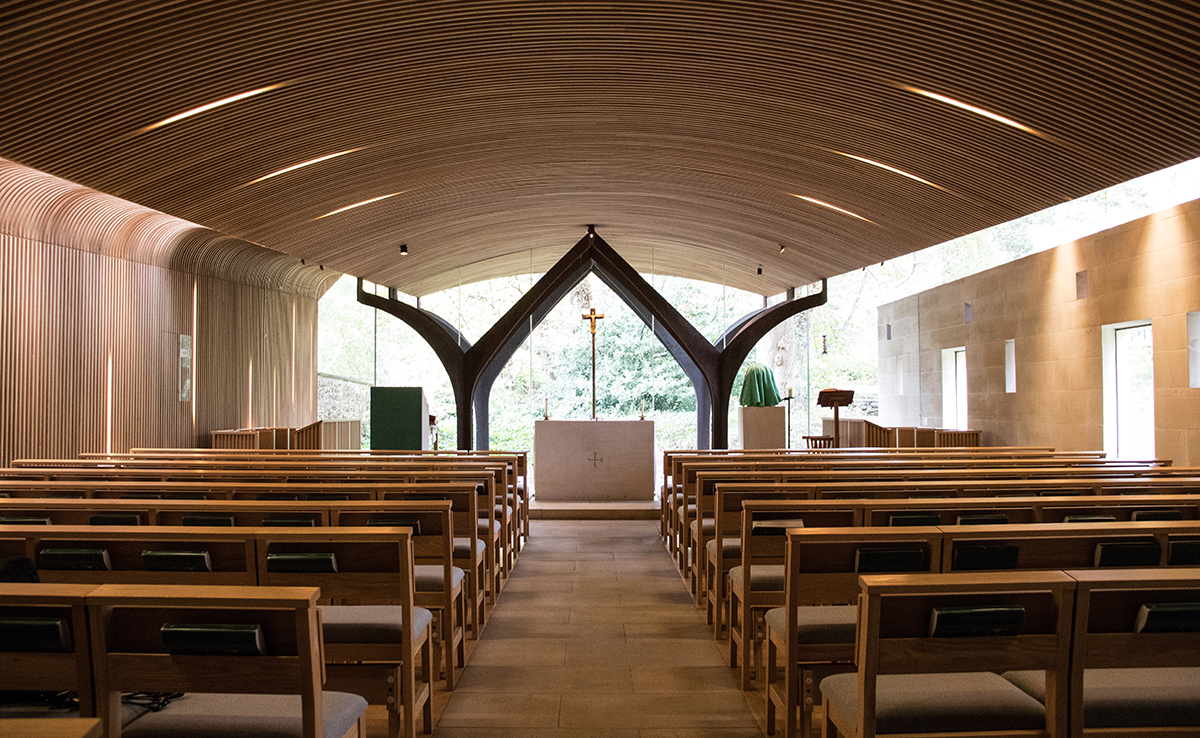 St Albert’s, looking from inside to out

Dr Tree Burton is a composer and Programme Leader of the Bachelor of Music at Edinburgh Napier University. Her next site-specific composition will be performed in Le Corbusier’s Notre-Dame du Haut at Ronchamp in the Summer of 2021. More info about these and other works can be found at www.treeburton.com