As we celebrate Black History Month in Scotland, Aleisha Omeike tells us what the month means to her and reflects on her experience of St Andrews, present and past.

Understanding the discourse surrounding the history of Black Scottish identity has been a challenge for me.

Throughout my time in school, I was presented with a warped history which primarily focused on the transatlantic slave trade. Now, with Black History
Month being proudly celebrated in Scotland and across the UK, I am relieved that Black British identity is finally appreciated in a way that I have never seen before. 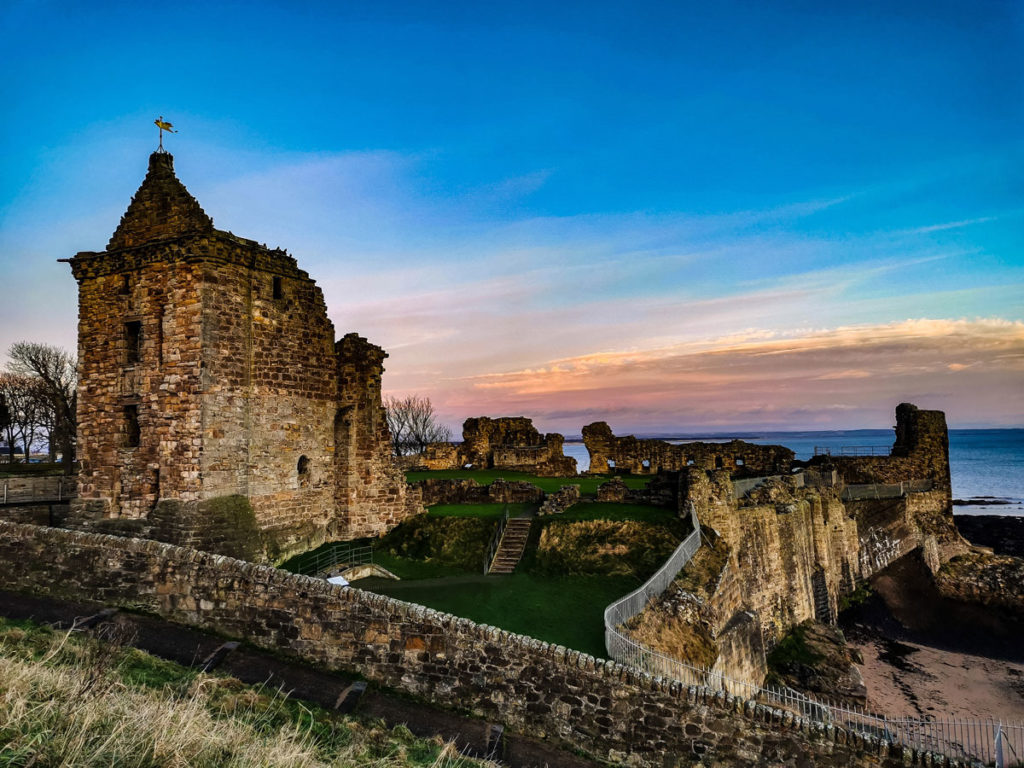 St Andrews Castle has a 450-year history and performed in a dual function over its many years – its role as a bishop’s palace, and as a fortress and state prison. Research into whether the castle has any possible links with colonialism and the transatlantic slave trade will begin in the coming months.

As it is Black History Month, I feel it important to review some of the history of my university town of St Andrews which is full of significant landmarks.

The ancient castle which lies on the beach shore has become one of my safe havens. At times in my first year, when I was feeling like I did not belong, I would go sit by the castle to unwind and gather my thoughts. 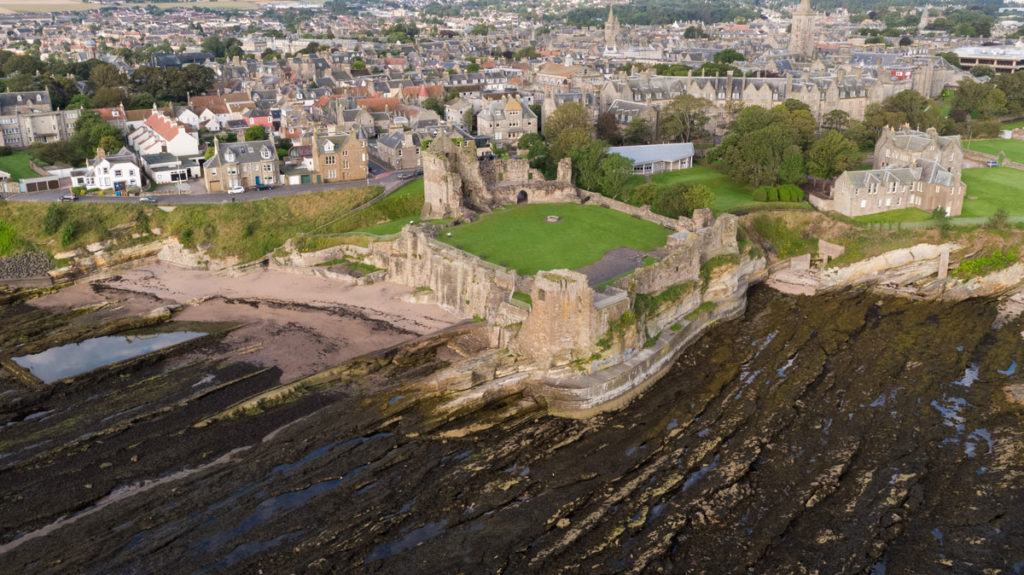 The castle was the official residence of Scotland’s leading bishop (and later archbishop) throughout the Middle Ages. St Andrews Castle was left without a resident or a purpose when bishops were abolished in 1592. It fell rapidly into ruin.

Built in the 13th century, the castle was the main residence of the archbishops and bishops of St Andrews for years. In addition, King James III was most likely born at the castle in 1451. His successor, James IV, came to the throne in 1488.

King James IV was a popular, fun-loving king with many interests. Many Black individuals were present at his royal court, a rarity during this period of time. While some worked as servants, others seem to have been invited guests or musicians. 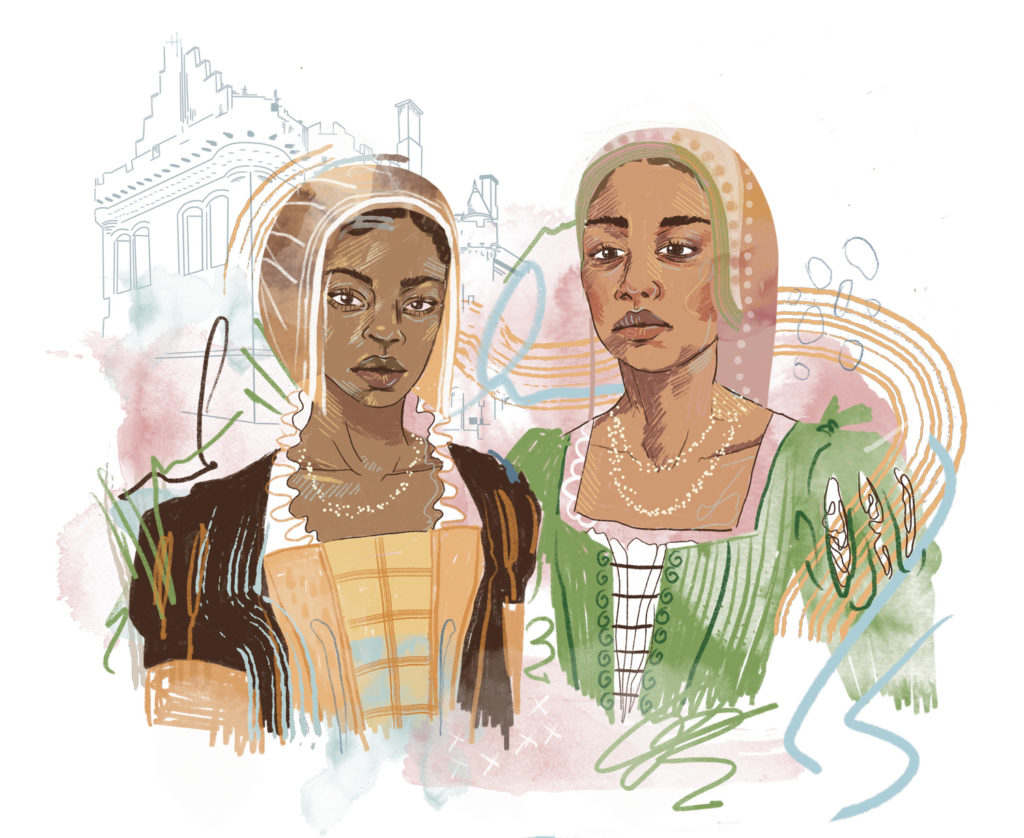 Margaret and Ellen (or Elen) were two Black women who worked as high-status servants at James IV’s royal courts. Image by Jacqueline Briggs.

Although most of St Andrews castle has gone now, a visit is still worthwhile as you can see the ruins which make for a picturesque view.

Money of the Melvilles

While St Andrews dates back hundreds of years, Andrew Melville Hall — the university hall I resided in my first and second year — was built in the 1960s.

A relatively recent building, this Brutalist design is now a listed building. It’s one of many buildings in St Andrews with links to the Melvilles. The namesake carries connections to the slave trade through family ties. The Melville family possessed much wealth, accumulated through their plantation in Jamaica, operated by enslaved people.

They built many of the oldest university owned structures situated all over the town of St Andrews. This serves as a reminder that the history of slavery is not only a global issue, but a local one with linkage that lies on our doorsteps. 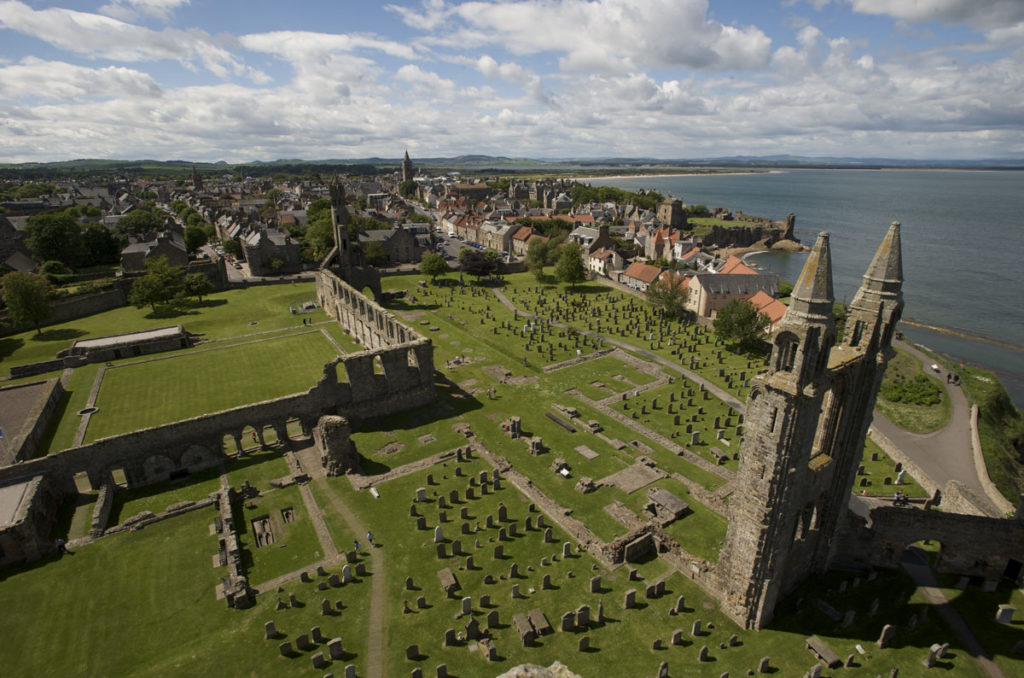 The cathedral was begun in 1160–2 by Bishop Arnold. Work continued over the next 150 years. In 1561, it was abandoned and the original building of St Rule’s was left to fall into ruins. Research into whether the cathedral has any possible links with colonialism and the transatlantic slave trade will begin in the coming months.

Connections to the Cathedral

The cathedral is another of the town’s famous archetypes. The remains of St Andrews Cathedral, previously Scotland’s largest, show how impressive it once was.

The cathedral is situated at the east end of St Andrews’ main street, composed of a collection of ruins that together make up both St Andrews Cathedral and a number of associated religious buildings including St Rule’s Tower as well as St Mary’s Church.

A notable clergyman associated with the cathedral in the middle ages was Bishop James Kennedy, founder of St Salvator’s College at the University of St Andrews – a beautiful building where I enjoyed some history lectures before the pandemic hit. 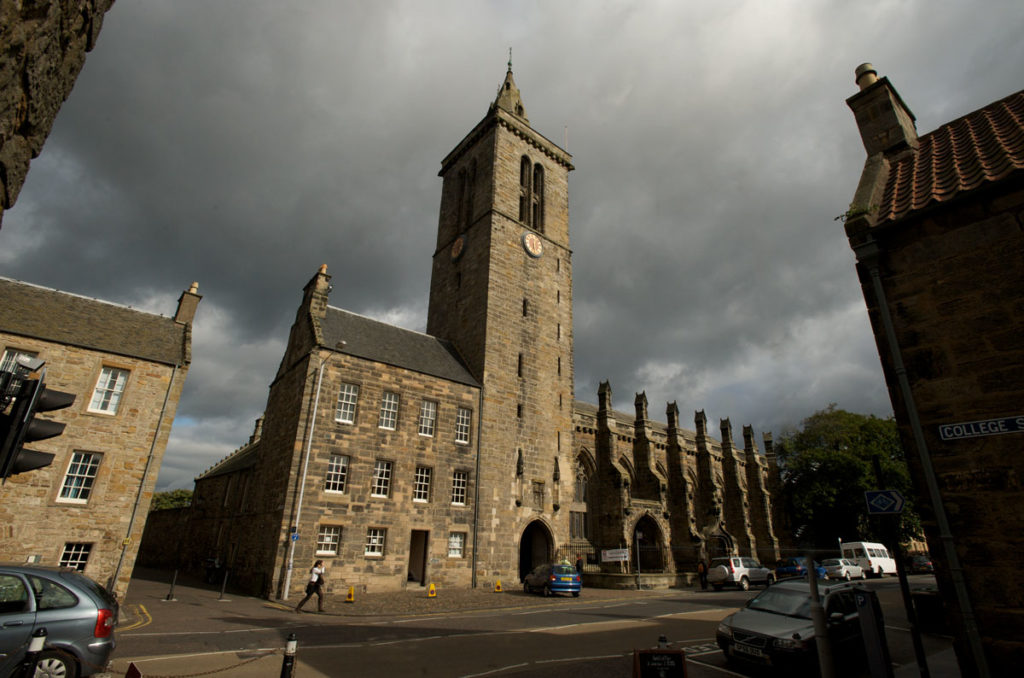 St Salvator’s College was originally founded with a missionary as well as an educational function. As a result, the chapel is a notable landmark of the town and remains open to visitors.

While studying at St Andrews I have encountered peaks and valleys. Being one of the only Black and working class students attending the university proves tough at times.

At first, I found it rather difficult to find my feet. I felt I had to validate my place at the university more than others did, demonstrate how I wasn’t just the ‘token’ Black girl. I believe this speaks to my desire for belonging and acceptance within predominantly white spaces.

This deep rooted desire is something I am working on eliminating completely. At present, it still loiters inside me from time to time however I have found various methods to suppress it. 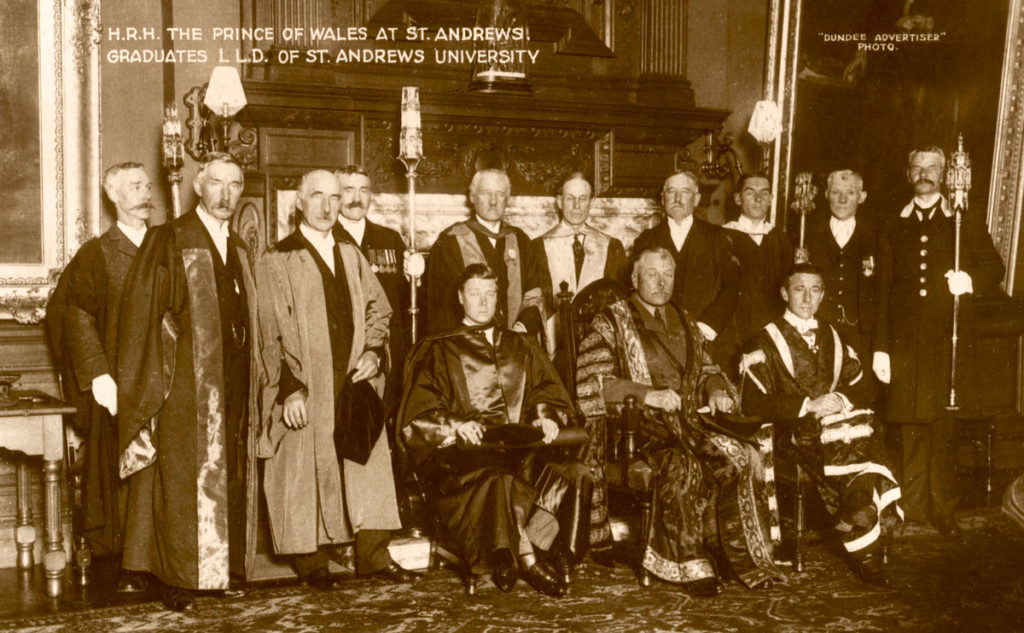 Until the late 20th century, universities like St Andrews were traditionally dominated by white men from middle class to wealthy backgrounds. The Prince of Wales (later Edward VIII) would have felt very at home during his visit in 1922. In 1968, Sir Learie Constantine was appointed as the university’s first Black rector but it was only in 2020, after over 600 years of history, that St Andrews appointed Dr Leyla Hussein OBE as their first female Black rector. Image © Courtesy of HES (Survey of Private Collections).

It is with enormous gratitude that I can say I have had many opportunities to contribute to the discussion of anti-racism within St Andrews in the past year. In my third year I held a place as intersectionality officer on the university’s feminist society. This allowed me to oversee the society’s activities and to ensure that they remained inclusive for everyone – regardless of race, class, gender and any other identity.

The position encouraged me to embrace diversity and gave me a lot more confidence. For the first time I felt I properly fit at the university and my desire for acceptance vanished. 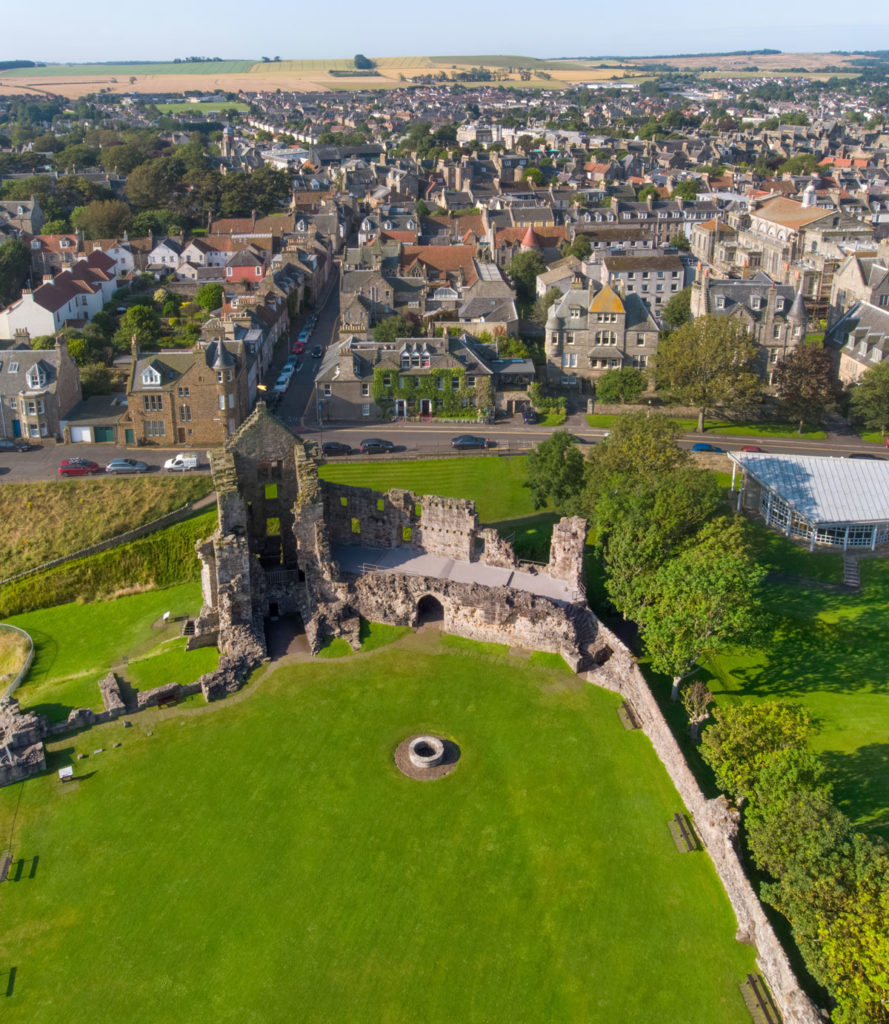 As a student, I celebrate Black History Month, in part, through attending events on campus where discussions surrounding Black History are fostered. As an anti-racist educator, I witness first-hand the positive results of these events on the student body.

This past year has taught me that regularly assessing my role (at both a micro and macro level) in continuing to fight for the rights of Black people is vital. Reflection during Black History Month reminds us how far we’ve come, and how far there still is to go. I do my work so that young Black women may find inspiration in seeing someone who looks like them speak up in traditionally white spaces.

During this year’s Black History Month, I contemplate on my desire to make an impact and this keeps me motivated. Being a proud Black woman, I believe that conversations surrounding Black history and culture should be highlighted throughout the whole year, not only during a single month.

Get involved this Black History Month

For those who are white, and want to be involved in Black History Month and in the anti-racist movement, use this time to consider how you can do better.

Unlearn biases, improve your understanding of what it means to be Black and research how you can be an effective ally. Most importantly – remember that Black History Month serves as a reminder of Black excellence, Black resilience, of all that the Black community has accomplished. 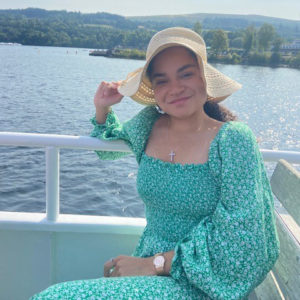 Aleisha is a 21 year old student in her 4th and final year studying psychology at the University of St Andrews. She is from a mixed ethnic background, with a White Scottish mother and a Black African (Nigerian) father. As an anti-racist educator and intersectional feminist, she is passionate about empowering everyone and raises awareness about racism to improve Scotland. She has a keen interest in history, especially family history.