Learn how a young woman from Grenada brought a change in Scots law that lasted 180 years.

Have you heard of Dorothea Christina Thomas?

Born on the island of Grenada in the Caribbean in 1796, Dorothea was the youngest daughter of the extraordinary Dorothy ‘Doll’ Thomas.

Doll had established wealth and reputation after being given her freedom from slavery. UCL records show that Doll’s business involved renting out enslaved people. She also spent more than a decade securing the freedom of her children and other relatives.

Determined her own children and grandchildren would grow up well educated, in 1810 Doll moved the family to Britain. Her sons were enrolled in Dollar Academy, Clackmannanshire, while 14 year old Dorothea was sent to finishing school in London. 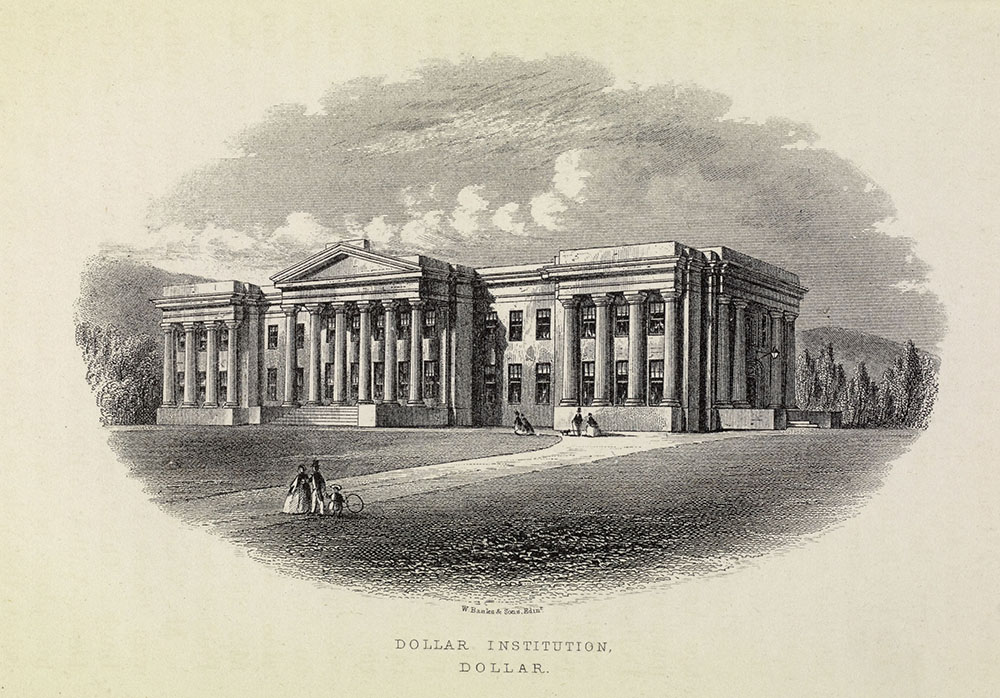 1883 engraving of Dollar Academy taken from ‘Reminiscences of Dollar, Tillycoultry and other districts adjoining the Ochils’ by William Gibson. © Courtesy of HES

At 17, Dorothea was back in Grenada and romantically involved with a merchant’s son.

They wanted a legally binding marriage, which would give him control of his wife’s money. In a pattern that history would repeat, Doll wanted to preserve her daughter’s financial independence.

A legal agreement was drawn up. If the merchant’s son stayed until Dorothea reached the age of 21, they could marry. Despite the £2,000 bond, he returned to England, leaving Dorothea, their 18 month daughter and a string of other illegitimate children.

A Move to Glasgow

Her heart was soon mended by Major John Gordon, a Scottish military man.

They couple exchanged rings at a private ceremony. Under colonial law in Demerara, this was all that was legally required.

John was recalled to Scotland and they moved to Glasgow. Their son, Huntly George Gordon, was born in Glasgow on 20 Aug 1821. 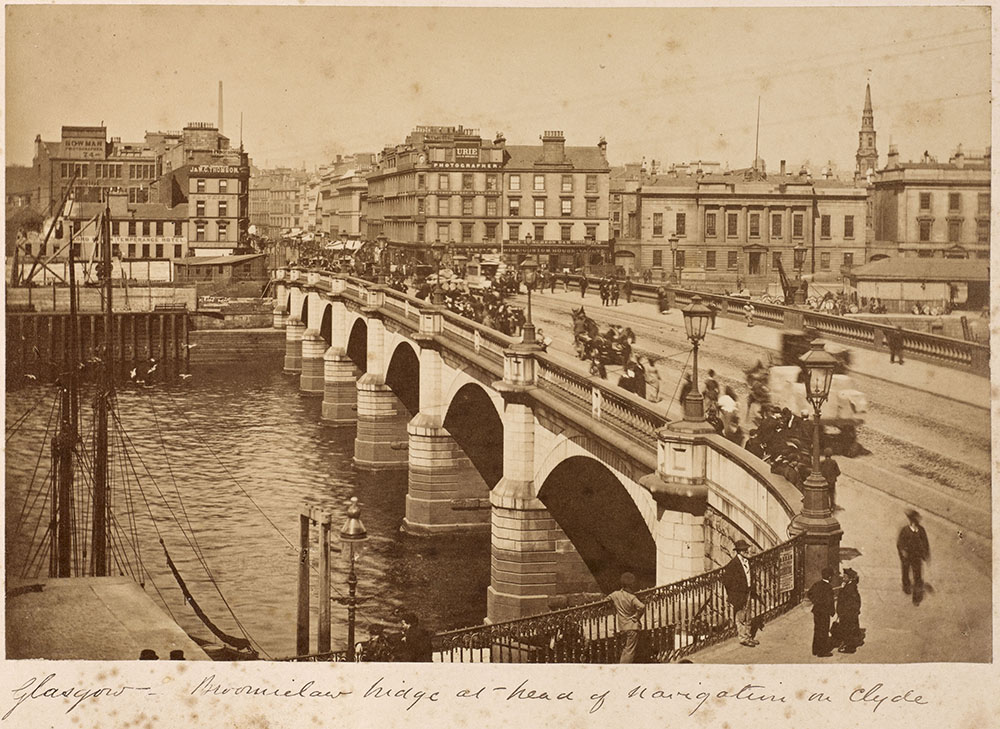 Glasgow’s Broomielaw Bridge was actually opened in 1836, some years after the couple relocated there. © Courtesy of HES

But marital bliss was short lived. Though accounts state they were very caring for each other, John’s income dropped and he began to resent Dorothea and her mother for their dependency on Doll’s wealth.

“You always tell me about your famous mother. Do you really think I am afraid of her? I would soon have her put in prison where she would get her heels cooled.”

John decided he should formally marry Dorothea under Scottish law. He asked for a £10,000 dowry to do so.

Doll refused – in her eyes, her daughter was married. It seems Doll wanted her daughter to be in a formal relationship, but free from legal ties that would entitle John to Dorothea’s own money.

Eventually John seemed to accept that his lifestyle was dependent on his mother-in-law. The reconciled couple moved to Edinburgh.

However, in 1826, John informed Dorothea that he had met another woman – a widow with a £300 income.

In a letter held by the National Records of Scotland he stressed they were never officially married, begging “forgive and forget a man who loves you and ever shall continue to do so while in life”.

Heartbroken, Dorothea went to court to fight his claim that their son was illegitimate and prove their marriage by “habit and repute”.

The case went to the Court of Session in Parliament Square, Edinburgh. There, John’s family gave evidence claiming they did not know him to be married. 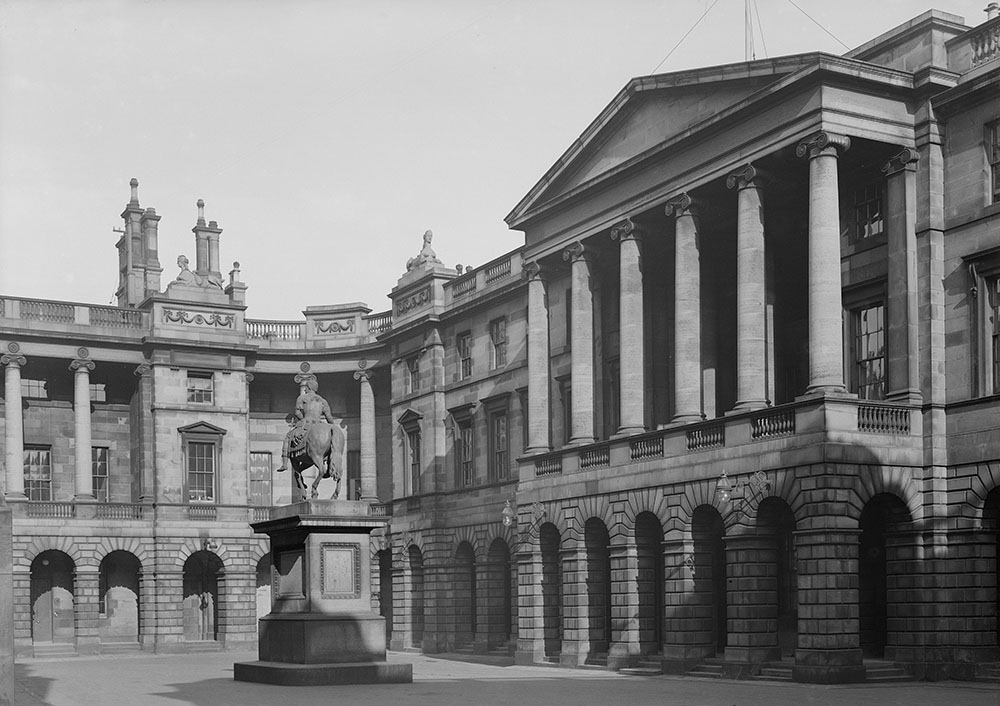 Sadly, much of Dorothea’s evidence that they were husband and wife came from servants and shopkeepers. Their word wasn’t considered as valuable as those in John’s social circle.

Following her failed court case, Dorothea returned to Doll’s side in Demerara.

But the case helped to define the requirements of ‘marriage by cohabitation with habit and repute’ – a form of marriage recognised in Scots law until 2006.

As for Dorothea’s son, Huntly was raised as part of the Scottish family by his step-mother. He went on to study at Edinburgh’s Royal College of Surgeons and rose to the position of surgeon general in the British Army.