Five-minute Folklore: Myths and Legends from Around Scotland

Treasure-filled tunnels, helpful ghosts and dalliances with the devil feature in our pick of the best folklore from Scotland’s historic places.

What’s the best story you’ve read or heard at a Historic Scotland site? Alongside the kings, queens and politics, there’s all manner of fascinating folklore, passed down through the centuries in myth, legend and song.

They’re the kind of stories which have always been perfect for sharing around the fireside on dark, cosy nights. So, as the winter wind whistles past our window, we thought we’d start January with five of the best. Gather round… 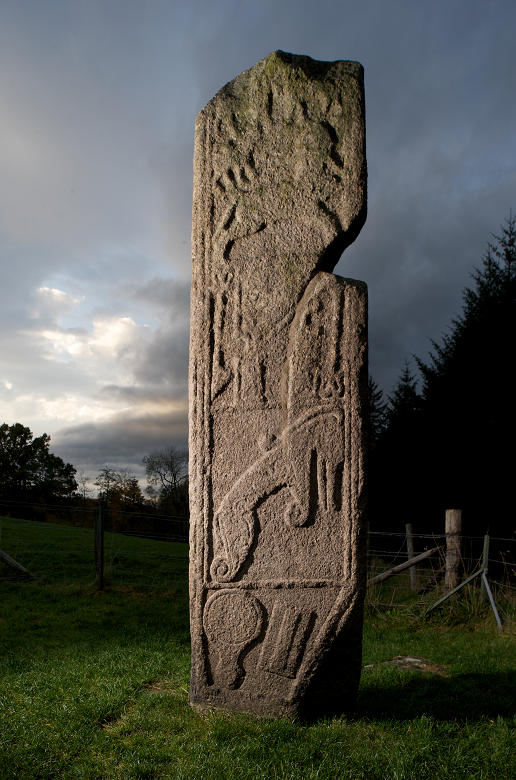 You’ll find the Maiden Stone, a 3-metre tall granite cross slab, just off the A96 a few miles outside Inverurie in Aberdeenshire. Local folklore contains many tales concerning the origins of this powerful piece of Pictish sculpture.

One story features a local girl, the daughter of the laird of Balquhain. Supposedly, the young maiden made a bet with a mysterious stranger. The terms? She could bake a good supply of bread in a quicker time than he could build a road to the summit of nearby Bennachie.

In an unfortunate twist, the stranger turned out to be the Devil and made light work of the hilltop road. When he returned to claim the maiden as his reward, she turned to flee. The Devil grabbed her and she was turned to stone on the spot.

Dancing with the Devil 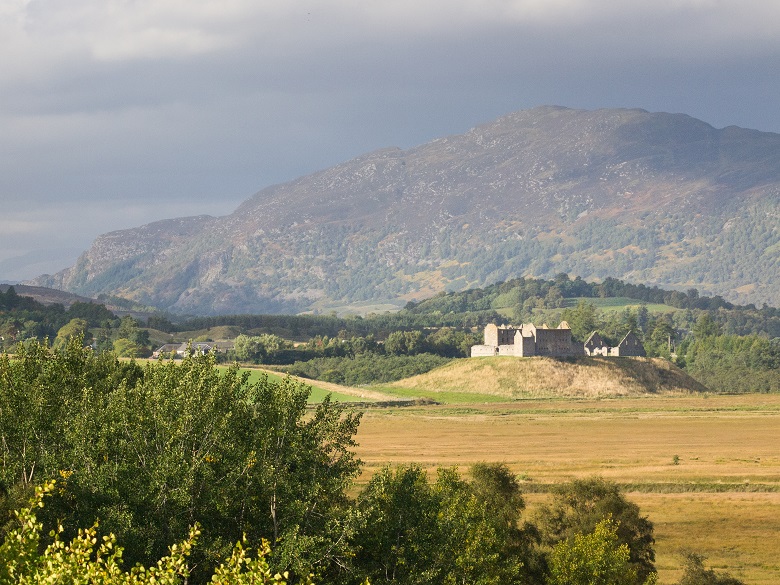 The Devil pops up again in another tall tale from the other side of the Cairngorm Mountains.

Long before Ruthven Barracks were built, the site was occupied by a castle which served as one of the “lairs” of the notorious Alexander Stewart, 1st Earl of Buchan. His ruthless use of power earnt him the nickname “the Wolf of Badenoch.”

According to legend, he was staying at Ruthven on a wild night when a mysterious figure dressed from head to foot in black appeared at the castle gates. He challenged the Wolf to a game of chess.
By morning, the storm was over and the strange guest had disappeared. But no one in the castle was left alive. Servants were found outside the castle walls, struck by lightning. The Wolf of Badenoch lay dead in the banqueting hall. Had he lost a game of chess to the Devil? 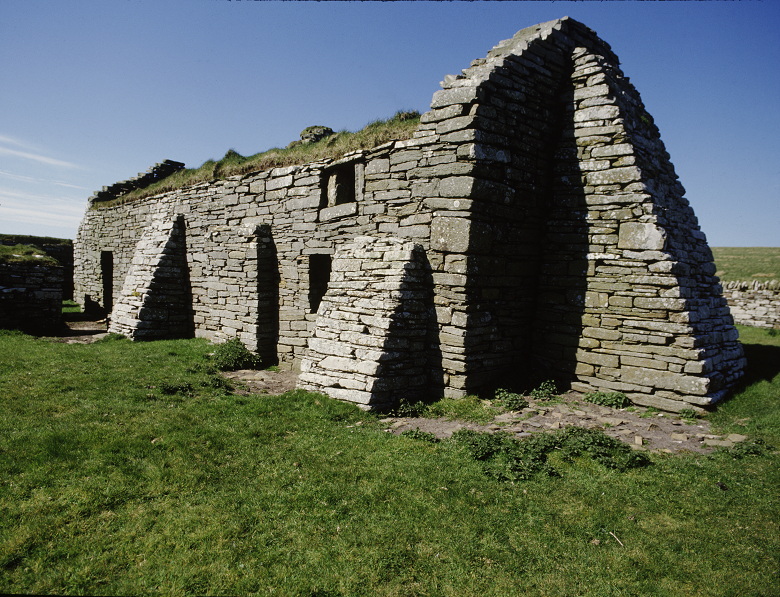 The name of the Orcadian island of Eynhallow derives from the Old Norse Eyin-Helga, meaning ‘Holy Isle’. But the existence of a medieval church there only came to light by chance in 1851.
A fever had ravaged the island, and the four families who lived here had to be evacuated. When the roofs of their cottages were dismantled, the structure of an ancient church was discovered.
The island is an important place in Norse folklore. It’s associated with the magical island of Hildaland, home to the mysterious Finfolk. These sea-dwelling shape-shifters are said to come ashore during the spring and summer months, with the aim of abducting – and then marrying – unsuspecting humans.
Fear not, as it’s believed one can esacpe the clutches of the Finfolk by exploiting their weakness for silver. Throwing coins out of your pockets should distract them long enough to make an escape. Maybe we shouldn’t go for a cashless society just yet?! 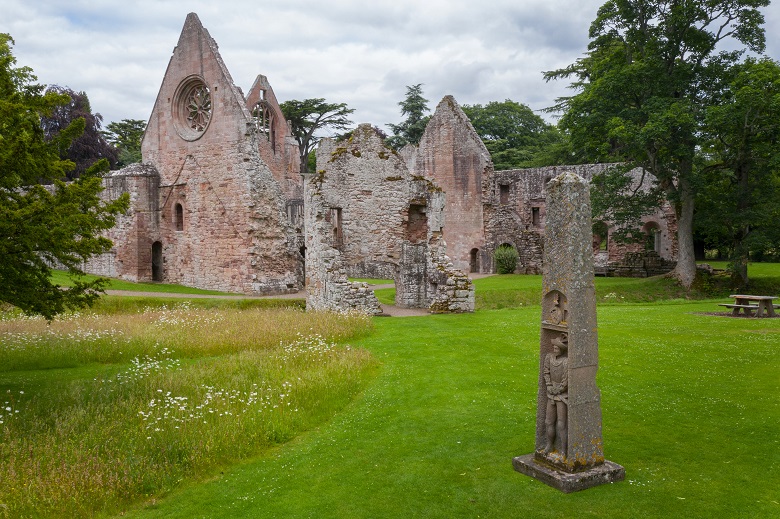 If you take a visit to Dryburgh Abbey in the Borders, you may just catch of a glimpse of a spirit who was making “friendly ghosts” cool centuries before Casper came onto the scene.

The earliest sighting of the abbey ghost, known as “Fat Lips”, came in the mid-1700s. A widow who was staying in the abbey vaults after the 1745 Jacobite Rising reported seeing the spirit, small in stature with heavy iron boots.

Fat Lips was not only friendly, but also rather useful. The abbey guest claimed that she went away one day only to return and find her room had been tidied by the ghost. Fat Lips had even managed to dry the floor by stomping around in his big boots! 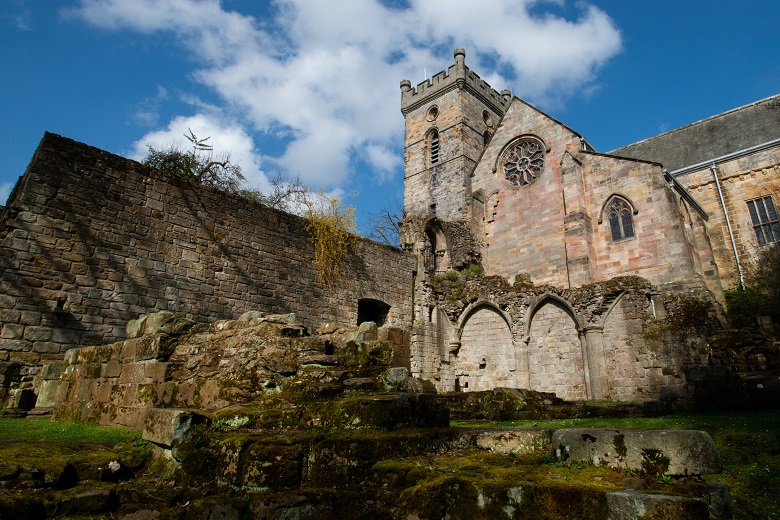 Let’s finish our journey in another abbey, over in Culross in the Kingdom of Fife. The abbey was founded as a Cistercian monastery in the 1200s and was home to a thriving community of monks and lay brothers until the Reformation of 1560.

The Culross monks had a reputation as producers of fine books, helping to stock the Chapel Royal library at Stirling Castle. But, if an old story is to be believed, it’s not just literary treasure that’s associated with the abbey.

If you read European folklore, it won’t be long until secret passageways and hidden tunnels appear. They’re a common feature of myths and legends, more often than not linking historic builings like castles, country mansions – and abbeys.

It is said that a gentleman in a golden chair is waiting in one such tunnel at Culross. Anyone who is able to find him will become the recipient of all sorts of valuable treasures. 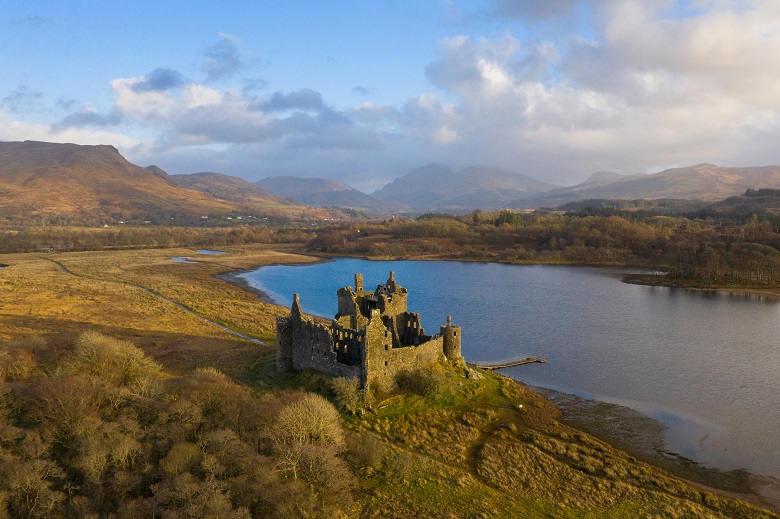 Kilchurn Castle beside Loch Awe. According to folklore, ‘the Big Beast of Loch Awe’ can be heard cracking ice on the loch in winter

If you’re in need of another folklore fix, you can use the Historic Environment Scotland website or PastMap to find a historic place close to you. Chances are there’s a curious story associated with it!

We’re always sharing tales, trivia and titbits on our social media channels and on the blog. Give us a follow or subscribe to the blog to have latest posts delivered directly to your inbox every Friday.