A good Boxing Day walk is the perfect remedy for that Christmas over-indulgence. Here are our favourite Boxing Day destinations to help you dust off those cobwebs!

If you’re looking for a gentle saunter, how about heading to Holyrood Park or down to Linlithgow Peel to feed the birds? The lochs and the surrounding parkland are great places to spot wildlife and have fun with the family. You can help keep the birds healthy by feeding them frozen peas, oats or seeds– bread isn’t great for them. You can download the bird feeding guide from our Rangers if you want to know more. 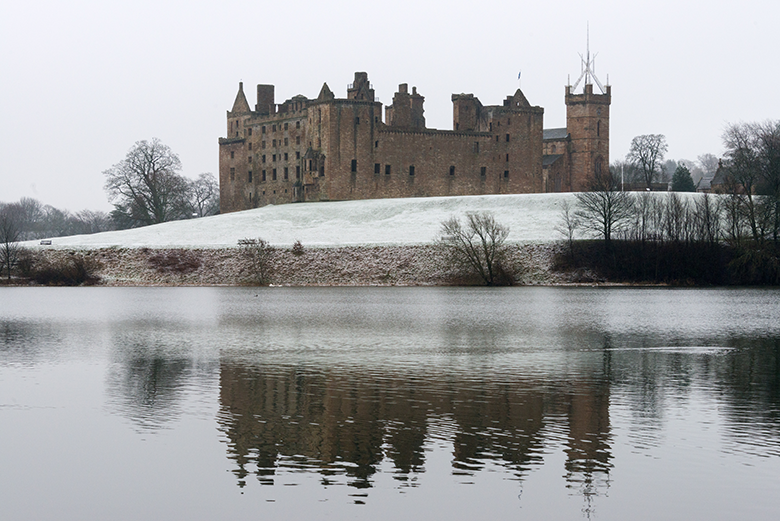 Linlithgow Peel is a nice, easy walk with lots of interest and wildlife – perfect for families. But remember the palace will still be closed on Boxing Day.

Head to the coast

There’s nothing like a good sea breeze to blow those cobwebs away.

If you’d like to get away from it all on your Boxing Day walk, St Ninian’s Cave on the Whithorn coast is the perfect spot. Experience the solitude of a sea-side cave said to be the hideaway of an early Christian saint and be inspired by the crosses carved by early pilgrims into the walls of the caves. 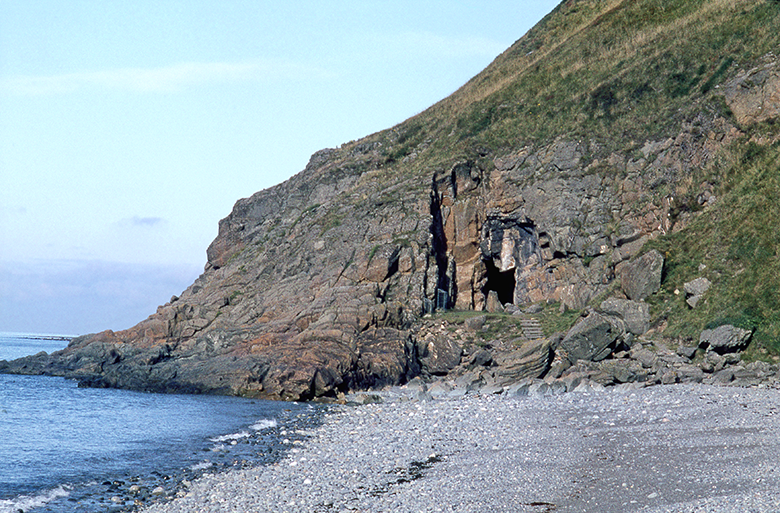 Legend has it that St Ninian used this isolated spot as a place of solitude and retreat.

Take a stroll around Dalgety Bay in Fife and pop in to the grounds of St Bridget’s Kirk. The interior is closed during the winter, but you can still enjoy a wander around the graveyard of this tranquil medieval church.

Look out for the keep built into the wall at St Bridget’s Kirk. This would have been used as a place to look out for body snatchers!

The Antonine Wall stretches across Scotland from the Clyde to the Forth so there are lots of interesting sites to visit – from Old Kilpatrick in the west to Carriden in the east. The Antonine Wall website has some suggested walking and cycling routes.

Rough Castle is the second-smallest fort on the wall, but it’s in the best state of preservation.

As you ramble along the lumps and bumps of this massive monument, imagine what life would have been like for the Roman soldiers who built and occupied the wall from around 142-165 AD. Around 7,000 soldiers were stationed on the Antonine Wall, from countries as far away as modern Syria, Spain and Algeria. Wonder what they would have made of the Scottish winter?!

A bit of a scramble

You’ll need some sturdy footwear when visiting these sites but these walks shouldn’t be too taxing if you’re relatively fit.

There’s a braw walk up to Balvaird Castle. This tower house was likely built in the late 1400s. The castle tells the story of the rising fortunes of the Murrays of Balvaird – as they climbed the aristocratic ladder, they made extensive improvements to the castle, including some fancy loos which were impressive for the time! 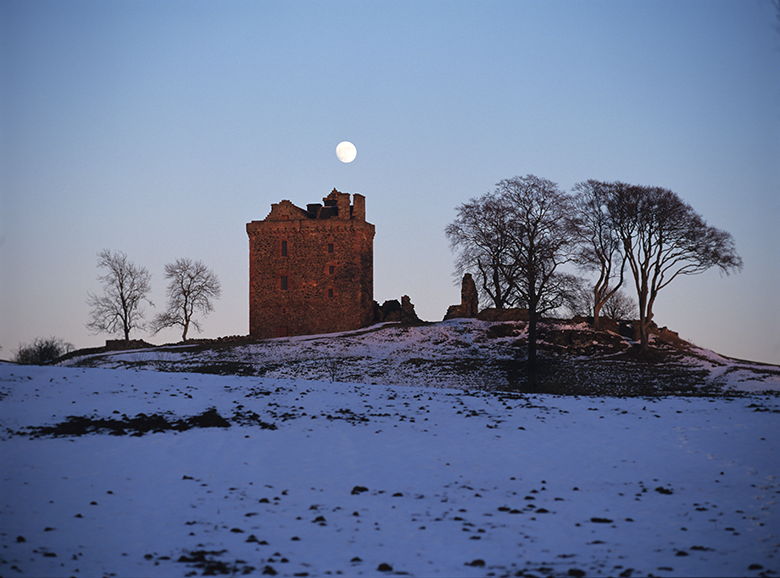 Nestled in the Ochil Hills, this late medieval gem is worth a visit.

Sitting proudly on its hilltop, the strategic importance of Ruthven Barracks is obvious. Visible from miles around, it dominates the head of the Spey valley. The barracks were built by George II’s government between 1719 and 1721 following the Jacobite rising of 1715. Head up here for spectacular views and a good chance of spotting deer. 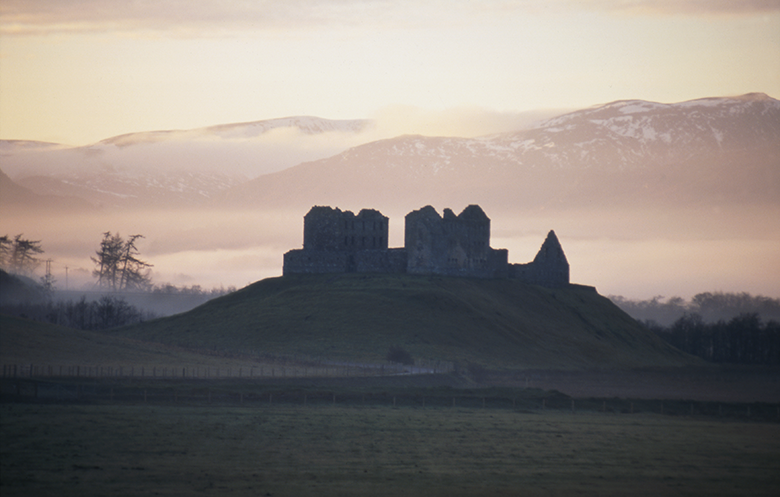 Visit the ruins of Ruthven Barracks, burnt by fugitives from Culloden in 1746 and never repaired.

Make a short trek to Auchindoun Castle and experience this wild and isolated location. This ruined stronghold near Dufftown has a bloody history full of clan feuds – some of which have been immortalised in folk ballads. 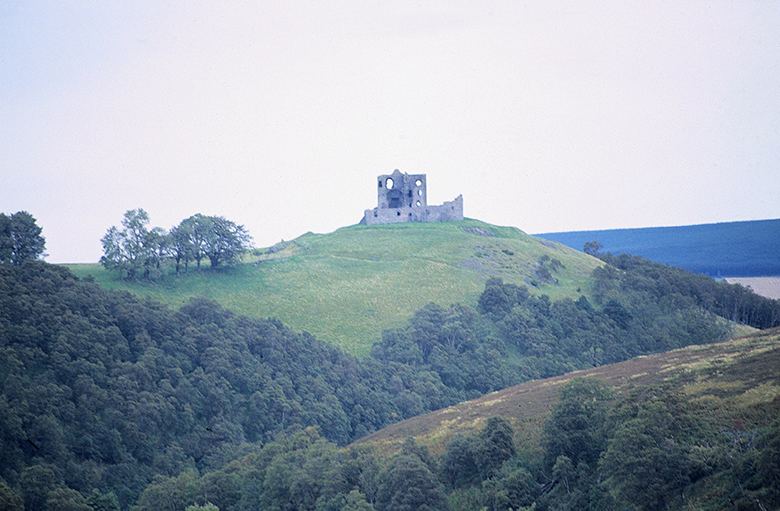 At a height of nearly 1,000ft, Auchindoun Castle is in a great strategic location. (The walk from the road to the castle isn’t the full 1,000ft!)

If you are made of sterner stuff than the rest of us, then you might want to strap on your walking boots head to Edin’s Hall Broch in the Scottish Borders. This is a rare example of a Lowland broch and it can be reached by an exhilarating hike along the Whiteadder Water. The site is surrounded by a hillfort which pre-dates the broch itself – it was probably built between 2,000 and 2,500 years ago. 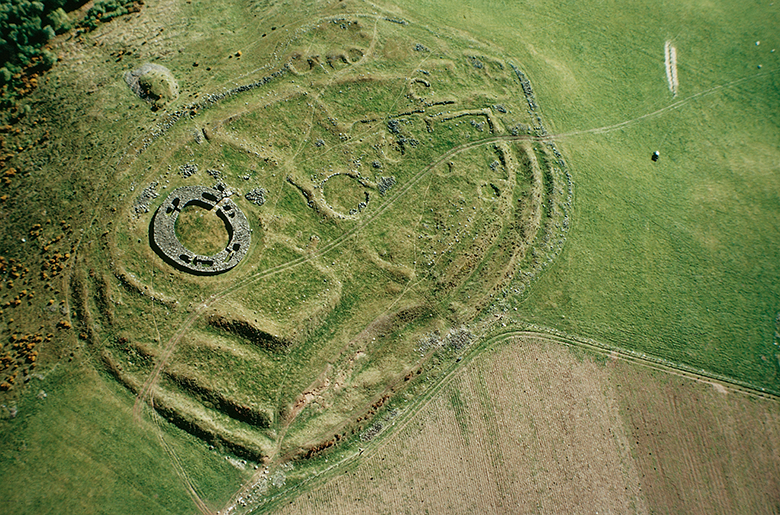 The broch, or roundhouse, at Edin’s Hall is just one part of a complex site.

Or how about a visit to a pair of 2,000-year-old tall broch towers set in a beautiful glen? The Glenelg Brochs – Dun Telve and Dun Troddan – are set just 500m apart. They attracted considerable interest in the 1700s and 1800s because of their remarkable preservation. In 1885 they were among the earliest monuments to be passed into State care. 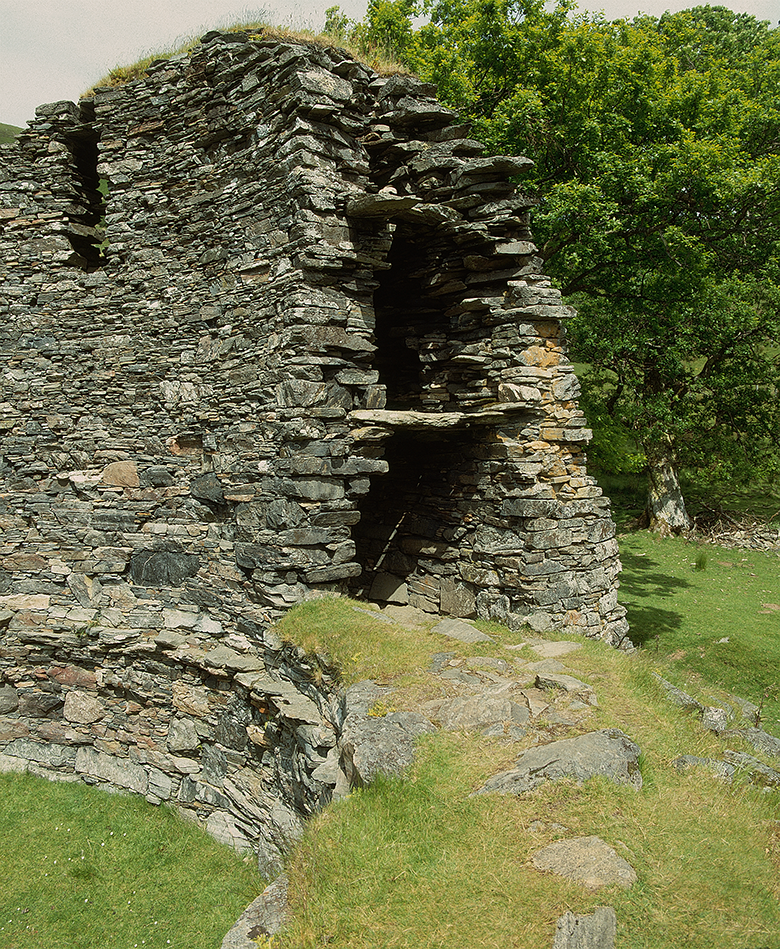 Dun Troddan broch is the shorter of the two brochs at Glenelg, but it is the better preserved.

If you prefer your adventures on the prehistoric side, then how about an outing to Tomnaverie Stone Circle? Wander around the remains of this stone circle amid an ancient, sacred landscape. You can also take in the spectacular views of Lochnagar. 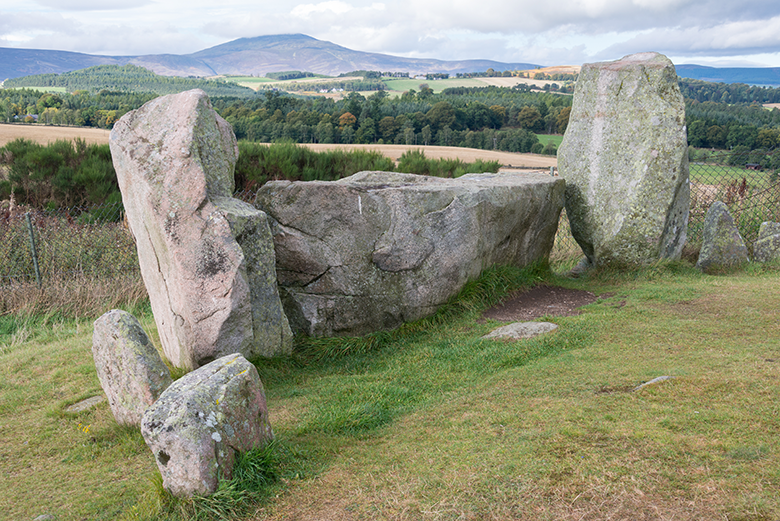 Tomnaverie is a recumbent stone circle, a kind of monument found only in north-east Scotland.

If you’re lucky enough to be spending your Christmas on Orkney, then Wideford Hill Chambered Cairn is a great place for a visit. Enjoy a bracing hillside walk on the Orkney mainland, with an awe-inspiring Neolithic tomb at the end of it. Will you dare to descend into the darkness of a 5,000-year-old chambered tomb? 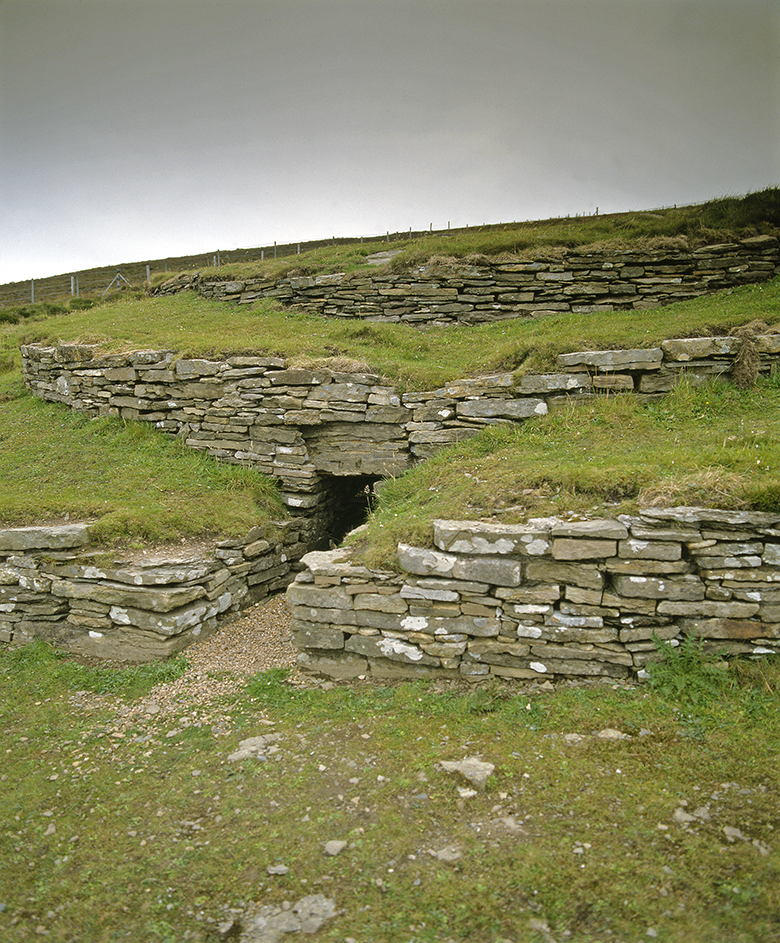 The current stepped shape of Wideford Cairn is down to 20th century consolidation works. The original cairn is likely to have been more domed.

Burial cairns, a stone circle, rock art and a hillfort – Kilmartin Glen has it all. This extraordinary landscape boasts the most important concentration of Neolithic and Bronze Age remains in mainland Scotland. The glen is also home to an important collection of medieval sculptured stones. 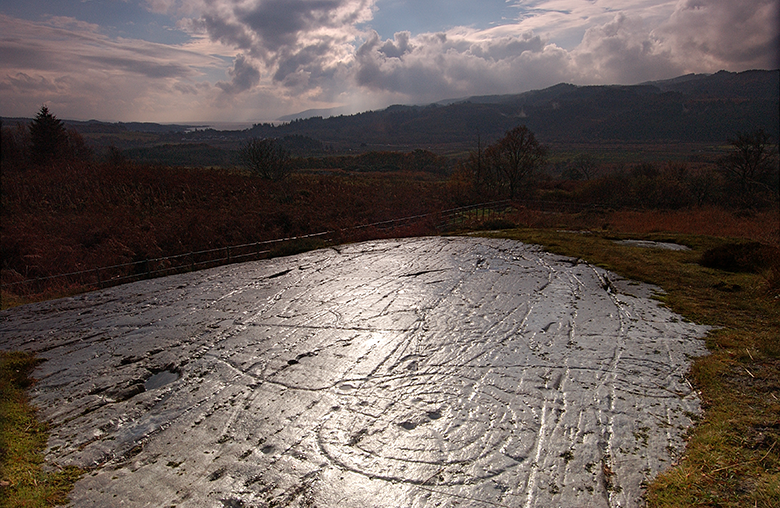 These cup and ring markings at Achnabreck in Kilmartin Glen are believed to be about 5,000 years old.

If you’re heading out on Boxing Day, remember to plan in advance. Check the weather conditions and dress appropriately. If you’re heading off the beaten track, make sure you have a map. At this time of year daylight hours are shorter and weather conditions are more severe. If in doubt, stay home, keep warm and polish off those Christmas leftovers!

And just a reminder that our staffed sites are closed for Christmas Day and Boxing Day. Check our festive opening hours.