Using cutting edge technology to monitor the condition of Charles Rennie Mackintosh’s Hill House in Helensburgh, a joint partnership with Historic Environment Scotland and the National Trust for Scotland is working to fully understand the extent of water damage to the famous Scottish building.

Standing deceptively plain and solemn against the Scottish sky, The Hill House is one of Charles Rennie Mackintosh’s most iconic works. However, the very fabric that makes up its signature grey exterior is endangering the lifespan of the house itself.

The teams at Historic Environment Scotland (HES) and the National Trust for Scotland (NTS) have joined forces, using state of the art technology and digital resources to help conserve this vital piece of Scotland’s heritage. 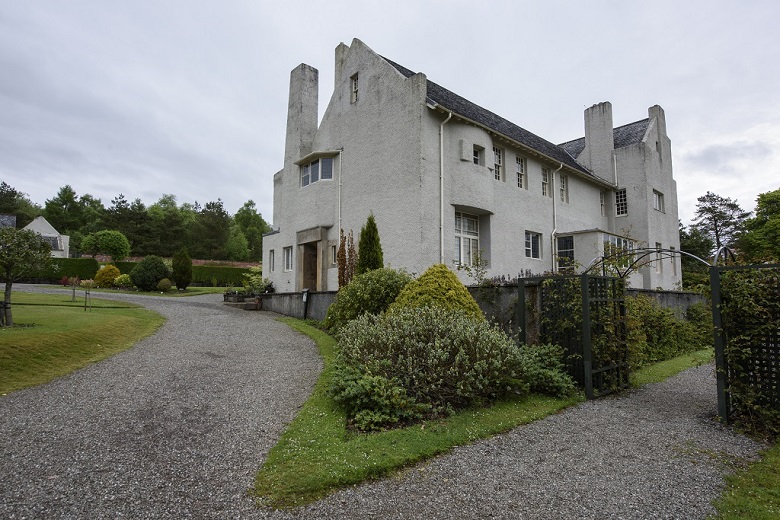 Designed inside and out by the Scottish architect and his wife, Margaret Macdonald Mackintosh, The Hill House in Helensburgh was completed in 1904 for the Glaswegian publisher Walter Blackie.

The interior was meticulously designed by the couple, from the architecture down to its furnishings. For the exterior, Mackintosh selected to use cement harling instead of the more traditional lime.

This external render succeeded in terms of the desired aesthetic but over time it has proved more than problematic. Over the decades, exposure to the Scottish elements has left the building with significant problems with water ingress, threatening the interior of the building.

The NTS has owned and maintained the house since its donation in the 1980s. It has outlined a plan to construct a ‘box’ around the building to allow it to dry out. But uncovering the details of how water is affecting the building below the surface requires a different approach. 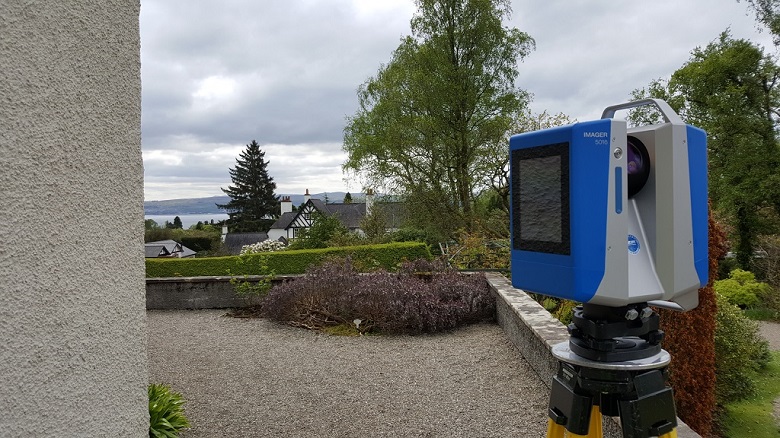 Senior Digital Documentation Officer Adam Frost uses the Z+F Laser Scanner to record the exterior of the building; A. Frost 2018

Armed with their specialist equipment, the Digital Documentation and Conservation Science teams from HES’ Engine Shed undertook an in-depth survey of The Hill House in 2018.

The Digital Documentation team used their Z+F Imager scanner to collect 3D data from both the exterior and interior of the building.

This data creates a 3D model of the site known as a point cloud. Point clouds can be processed in a number of ways, from conservation and site management, to education and interpretation.

As this was going on, the Conservation Science team was carrying out their own survey of The Hill House. They undertook Infra-red thermography (IRT) and microwave moisture mapping of key problem areas known to the NTS caretakers of the building. 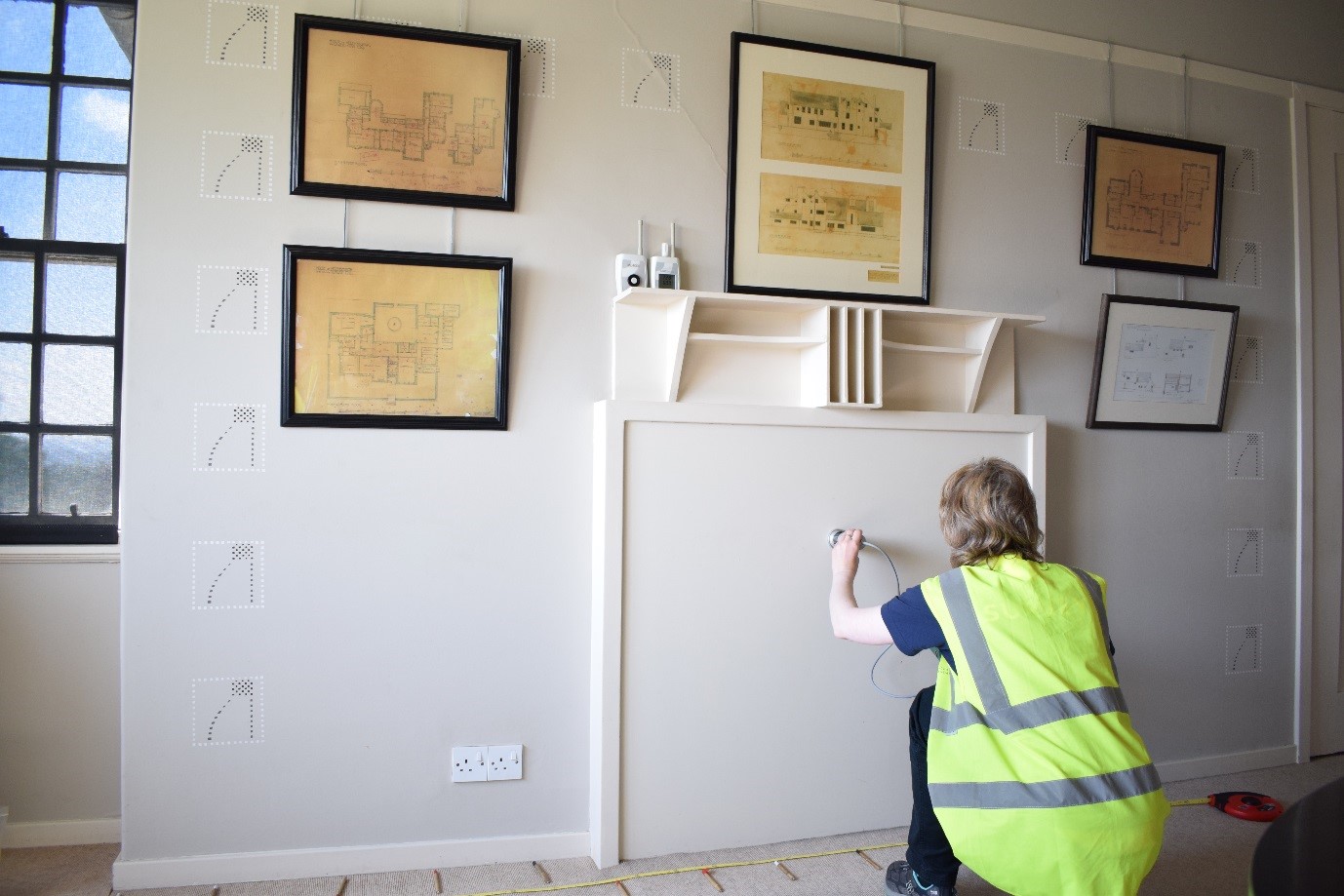 The IRT imaging records temperature differences of a surface, which is especially vital for our understanding the extent of water damage the building has sustained over decades in the wet Scottish weather. Microwave moisture mapping is a non-destructive method of analysing the moisture content of the building fabric, and can be used to determine the distribution and degree of sub-surface water saturation. 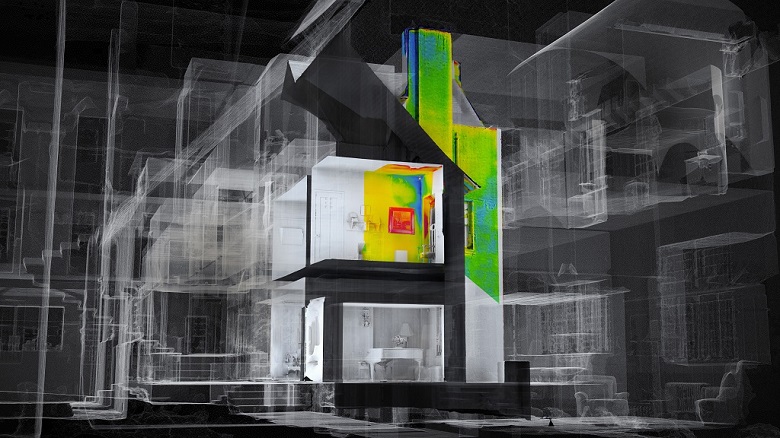 Thermal Imaging in combination with the 3D data set highlighting where damp is located on the South Column; A. Frost, 2018

Here’s where it gets interesting!

The survey results can be combined into one dataset. This allows us to see in 3D where the pent up damp is held in the cement fabric of the building. Combining laser scan data and IRT survey can indicate areas of significant water entry. It also gives clues to the direction water is travelling throughout the building.

The Hill House is over-saturated. These surveys alone will not stop the damp from crumbling the walls and threatening the interiors. However, this work is only the beginning.

Through collaboration between those who know the building and the scientists who can read it, in-depth surveys such as these can play a crucial role in the conservation and future management of Mackintosh’s masterpiece.

Read more about how The Hill House is being saved and see an artists impression of the ‘box’ shield on a dedicated NTS webpage. Donations to the appeal to build the ‘box’ shield around the house, can be made to the NTS.

Sophia is the Digital Project Officer for the Hill House, jointly employed by the National Trust for Scotland, and based at the Engine Shed in Stirling. She is interested in exploring how different technologies can be used tell new stories about the past. View all posts by Sophia Mirashrafi