A Taste of Auld Reekie

Ever wondered what life in Georgian Edinburgh might be like? Edinburgh College students uncover recipes that give us a taste of Auld Reekie!

As you may know already, the Old and New Towns of Edinburgh make up one sixth of Scotland’s World Heritage Sites. Auld Reekie’s unique character springs from the contrast between the medieval Old Town, with its pattern of distinctive narrow passageways, and the 18th-century New Town.

It’s easy to imagine what living in these towns during the 18th and 19th centuries might have looked like. Many of the buildings today look remarkably similar to how they were back then!

But wouldn’t it be great to get a true taste of Auld Reekie?

Over the last year, that’s exactly what students from Edinburgh College have been doing, with the help of our World Heritage team.

As part of Scotland’s Year of Young People in 2018, they’ve been time-travelling through Georgian kitchens, gobbling-up recipe books, before cooking up their own concoctions for an international audience.

Here’s what they’ve been getting their teeth into! 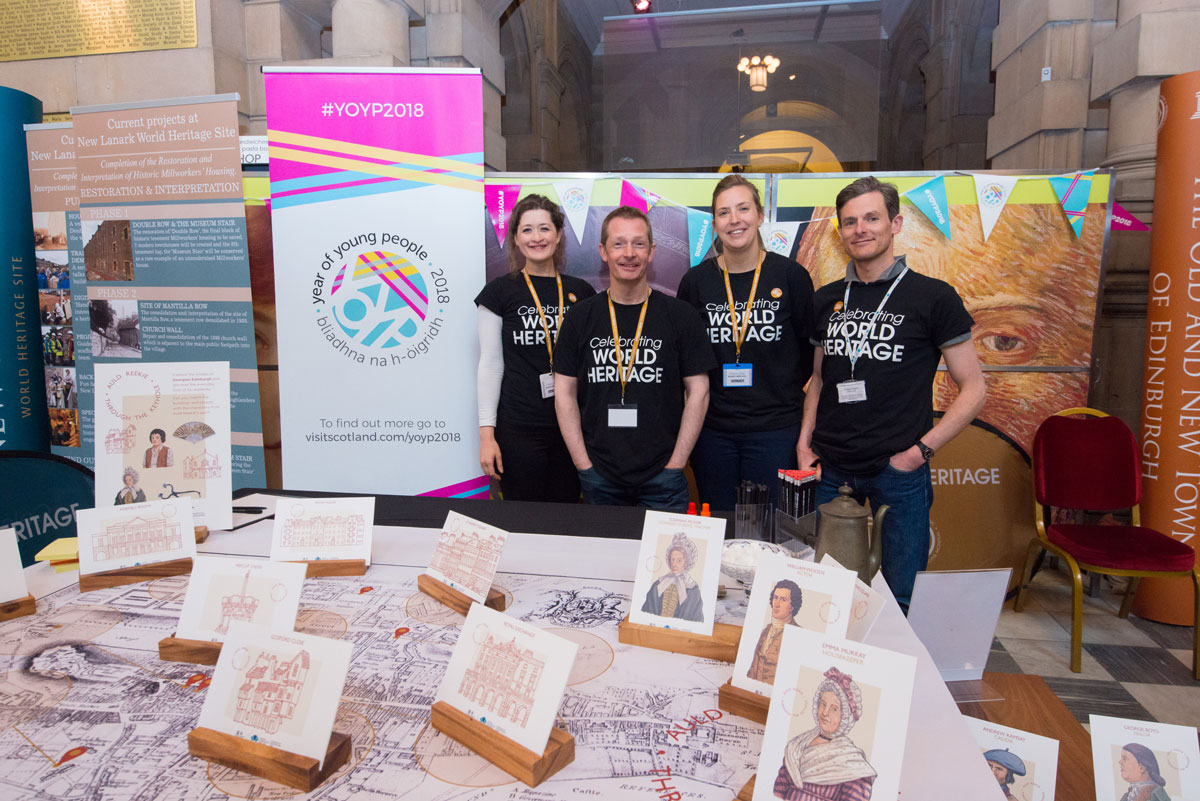 Back in April 2018, we launched ‘Auld Reekie Through the Keyhole’, engaging new audiences with the Old and New Towns of Edinburgh (ONTE) World Heritage site.

Along at Charlotte Square in Edinburgh’s New Town, the National Trust for Scotland look after a truly fascinating house. Following restoration, it shows a typical New Town house of the late 18th and early 19th century.

Our group of hospitality students took a behind-the-scenes tour, exploring the kitchens and getting a feel for the luxurious side of Georgian lifestyle.

The equipment in the grand kitchens was state-of-the-art for its time!  It had its own bread oven, roasting turners, and even contraptions for making cheese-on-toast. A Georgian Breville sandwich maker, you might say!

In the dining room, they took in the intricacies of laying the table, too. This made quite a difference to the preparation and serving of each meal. 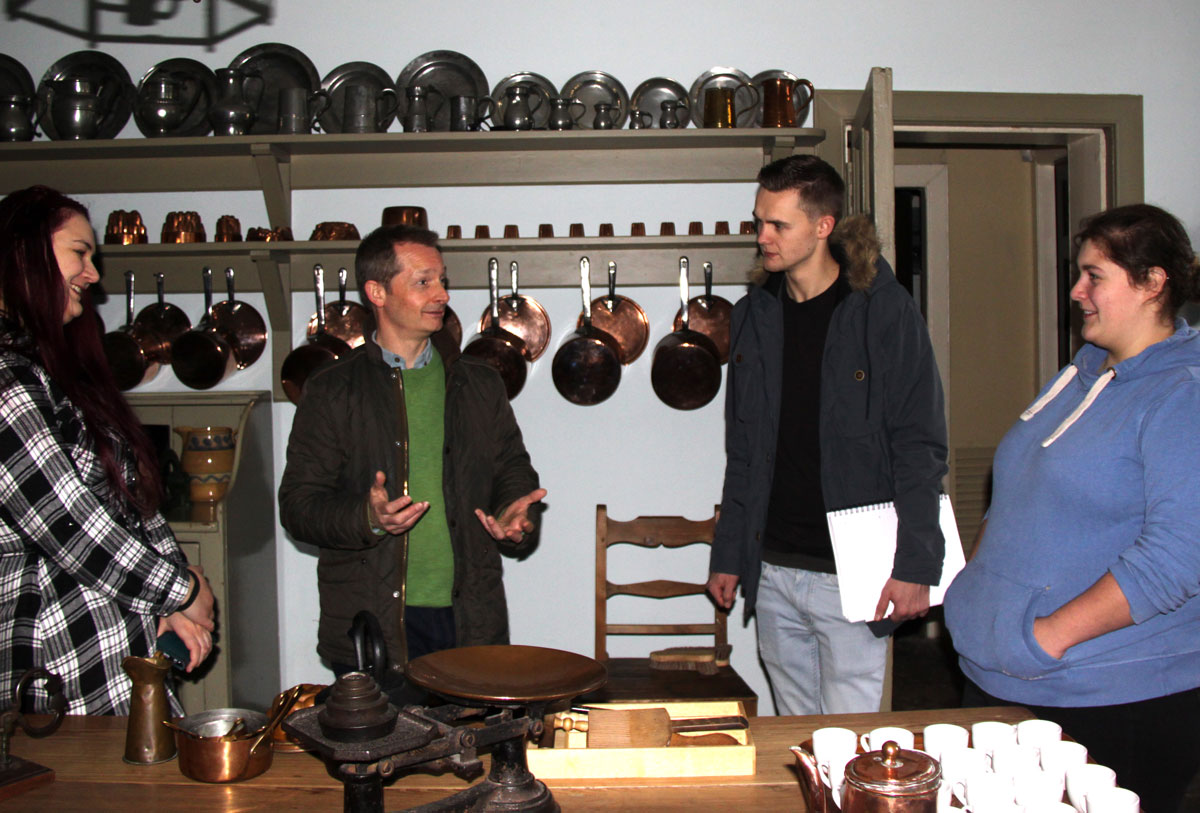 The group took a trip to the Georgian House in Charlotte Square, for a look at life in 18th and 19th century Edinburgh.

The next stop on the group’s journey into Auld Reekie took them to the National Library of Scotland. Here, it was time to get to grips with the type of food that was common in the late 1700s and early 1800s.

There were many cookery teachers opening schools in Edinburgh in this late Georgian period. In around 1750, there was Mrs Clelland, then Mrs MacIver, and taking over her business was Mrs Frazer around 1800.

They were perhaps the celebrity chefs of their day! Each of them produced a book – which went through several editions – so cooking was certainly popular!

Our team had a good look through some of these books, dating back as early as the 1780s! Mrs Susanna MacIver, who ran a cookery school at the Lawnmarket (on what we now call the Royal Mile), had a book that was a real favourite.

An edition of her ‘Cookery and Pastry’ book, published in 1789, contained recipes for dishes common in Edinburgh at this time.

From shortbread to French fougasse bread, and milk bakes right through to eel pie – there were a host of interesting recipes for the students to explore. 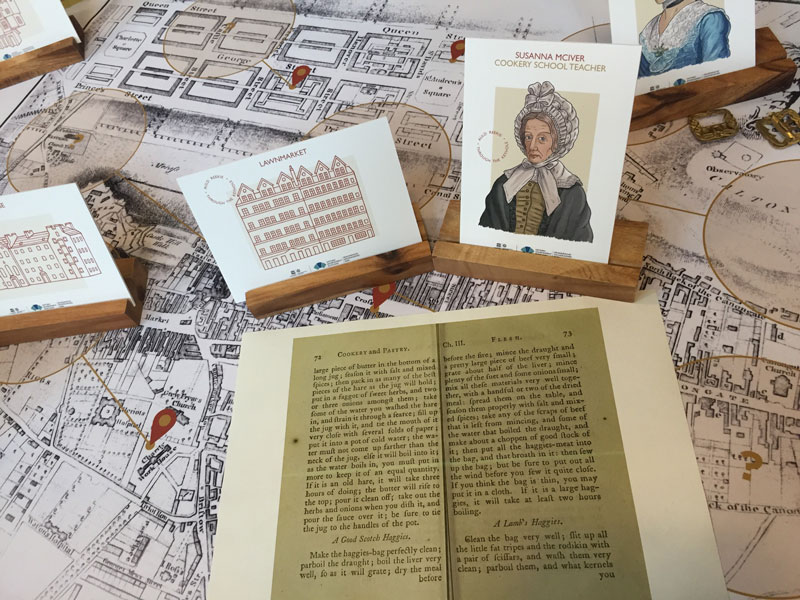 With their new knowledge of the food common in during the late Georgian period, our group then had the chance to present at November’s Eurocities Conference in Edinburgh.

This event brought together young ambassadors from all over Europe for three days of seminars, workshops and discussions on the roles heritage and culture play in the future of our cities.

Our team were on first, and cooking up some of Auld Reekie’s finest fare for the international delegates. These dishes came with a side of fantastic facts – for example, did you know…

Oysters were a staple part of Auld Reekie diets back in the 18th and 19th centuries. The Firth of Forth was once full of them! Oyster consumption was so regular that there’s still evidence of them imprinted across Edinburgh today.

Their shells form a large basis of ‘The Mound’, for example. Many buildings also contain oyster shells; with builders packing them into joints between the stones. This was a practical way of using up the huge quantities left behind!

In Johnnie Dowie’s tavern in Liberton’s Wynd, a speciality was Nor’ Loch eel pie. The eels came from the Nor’ Loch (before its draining, and the formation of Princes Street Gardens!), so given the state of the loch at that time, they would have had a rather distinctive taste… 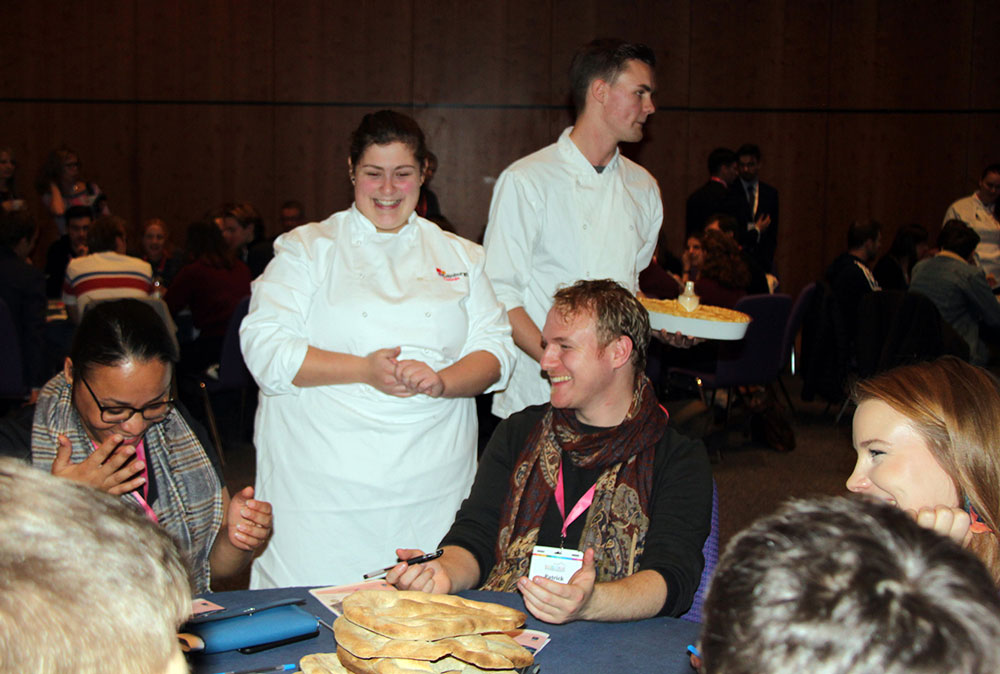 Hungry? Why not try some of Mrs MacIver’s recipes for yourself!

Skin the eels, and cut off the heads and fins; cut them about two inches long; season them with salt and spices; put them into the dish with a little butter and white wine, and the juice of a lemon; put in half a mutchkin of water, and cover it with puff’d paste. You may make pike or trout pies in the same way; only put more butter in the dish with them than with eels.

Make the haggies-bag perfectly clean; parboil the draught; boil the liver very well, so as it will grate; dry the meal before the fire; mince the draught and pretty large piece of beef very small; grate about half of the liver; mince plenty of the suet and some onions small; mix all these materials very well together, with a handful or two of the dried meal; spread them properly on the table, and season them properly with salt and mixed spices; take any of the scrapes of beef that is left from mincing, and some of the water that boiled the draught, and make about a choppen of good stock of it; then put all the haggies-meat into the bag, and that broath in it: then sew up the bag; but be sure to put out all the wind before you sew it quite close.

If you think the bag is thin, you may put it in a cloth. If it is a large haggies, it will take at least two hours boiling.

Throughout 2019, our World Heritage team are running more events to engage new audiences with the ONTE World Heritage site. Keep your eyes peeled for more updates throughout the course of the year!