Robbed of Our History: Heritage Crime

We are fascinated with historic wrong-doings – but modern crimes committed against heritage aren’t making it into the history books. From Stirling to Scapa Flow, we uncover recent examples of heritage crime in Scotland.

Crimes in history are often documented in minute detail.

From the body snatching murderers of Burke and Hare to the thousands people accused to witchcraft in early modern Scotland (often stemming from neighbourhood quarrels), we are fascinated with records of historic wrong-doings.

But unfortunately – and perhaps surprisingly – crimes committed against heritage aren’t making it into the history books.

In partnership with Police Scotland and others, we’re aiming to change that here at Historic Environment Scotland (HES).

What is heritage crime?

Historic buildings, monuments, shipwrecks and other heritage assets such as coins, statues or archives are at risk of the same criminal activity as modern assets, from laptops to rail networks.

But when historic places or their associated artefacts are damaged or stolen, we could lose a piece of the past forever. Damage may be beyond restoration. Stolen objects might never be found or recovered.

Heritage crime is any criminal activity which harms a heritage asset.

The victims aren’t just the owners of the asset. The communities these places are part of also suffer.

Here are six activities that you might not recognise as heritage crimes – and what you can do about them.

Last month, confectionery company Cadbury pulled their advertising campaign. The message encouraged families to “grab your metal detector and go hunting for Roman riches”. They didn’t mention that regulations are in place in many countries to protect archaeological heritage, including laws on metal detecting.

Before you go on a buried treasure hunt in Scotland, it’s important to remember that more than 8,000 historic sites are legally protected scheduled monuments. Undertaking certain activity at scheduled monuments, including unauthorised metal detecting, could break the law. (1/2)

Many people own and use metal detectors in Scotland. They’re often individuals, members of clubs, or participants in archaeological projects. Responsible metal detecting can play an important role in researching our past, where disturbance of sites is controlled and finds are recorded and reported on. 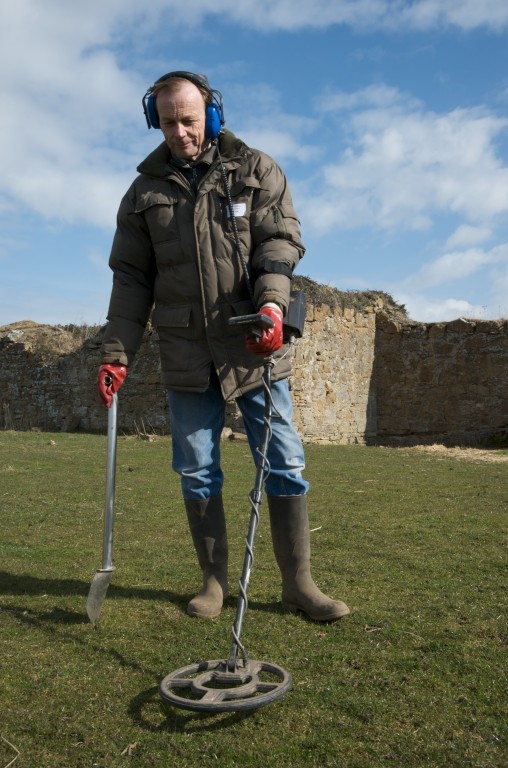 Responsible metal detecting has led to some incredible discoveries – but without the correct permissions, it may be a heritage crime

Scheduled monuments – sites of national importance – are legally protected. Permission must be granted by us before metal detecting and certain types of geophysical survey can take place on those sites.

Find out more about metal detecting in Scotland and stay on the right side of the law.

If you do make an archaeological find when out metal detecting, you must declare it to Treasure Trove.

In Scotland, heritage crime isn’t recorded separately to other types of criminal activity by the police. Theft is recorded as theft, whether it’s someone’s purse on the high street or a historic artwork from a gallery. This means we don’t have statistics on the amount of heritage crime in Scotland.

Our counterparts south of the border, Historic England, commissioned research into the scale of heritage crime in England. It revealed that the biggest single threat to historic assets is metal theft. The type of building most of risk are churches, mostly due to their lead roofs, a trend that is repeated in Scotland.

Read our guidance on protecting traditional buildings from lead theft. 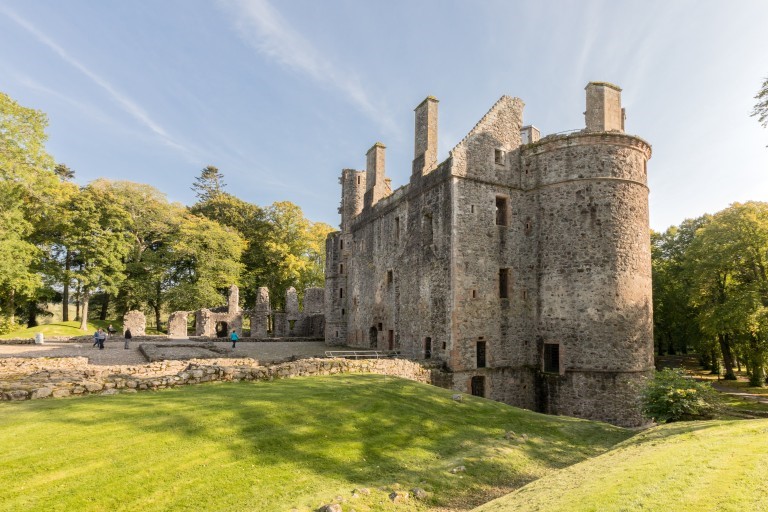 The lead rooftops of Huntly Castle in Aberdeenshire were the target of metal theft in 2012. More than 180 square feet of metal worth £14,000 was stolen

But heritage crime doesn’t only take place on land.

In 2016, two divers were each fined £18,000 for illegally taking artefacts from the wrecks of the scuttled German High Seas Fleet at Scapa Flow, Orkney. We recently consulted on whether further protections are needed to safeguard the future of the site by designating it as a Historic Marine Protected Area status. The decision will be made by Marine Scotland later in the year. 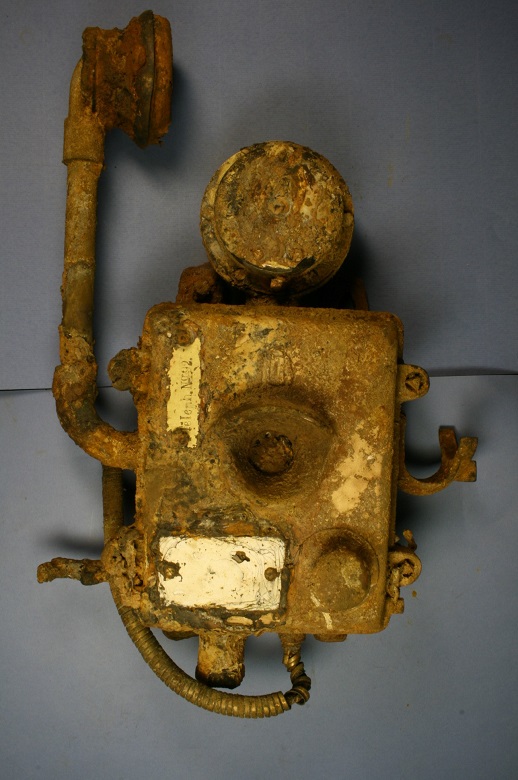 Sometimes, people want to take a memento home from their Scottish travels, like one Belgian tourist at Clava Cairns.

During his visit in 2000, he noticed a stone that he thought resembled a stone age tool. He lifted the item and took it home with him. Not only was this move a heritage crime, but something the tourist sincerely regretted for more superstitious reasons.

Soon after taking the stone, he experienced a run of bad luck. His daughter broke her leg, his wife became very sick, while he broke his arm and even lost his job.

Later that year, a parcel containing the stone and an anonymous letter from the tourist which declared the stone “cursed” arrived with Inverness Tourist Information Centre. It was returned to its home in Clava Cairns.

In an unusual event last year, our Rangers discovered that ground in Edinburgh’s Holyrood Park had been disturbed. A metal plaque of a pentagram had been embedded in the earth. 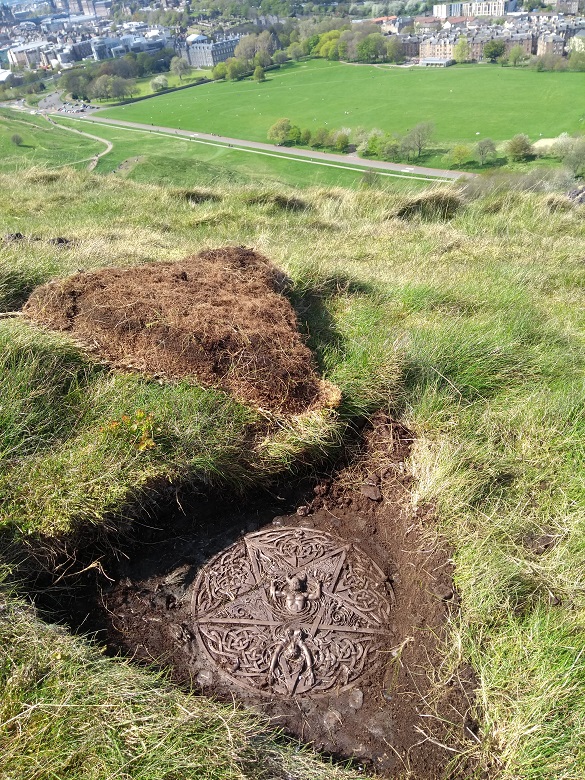 Like many of the historic places in our care, Holyrood Park is a scheduled monument. Unauthorised works at scheduled monuments – even with the intention of repairing them – are heritage crimes. Without scheduled monument consent, these activities will lead to a police investigation and possible action against those responsible.

Find out more about the legal requirements for works on scheduled monuments and applying for consent in our Managing Change in the Historic Environment guidance.

Another structure appeared without permission at a scheduled monument last year. The land owner of Neolithic burial cairn of Carn Glas, near Inverness, erected a bird hide and shooting butt.

We met with the farmer, who agreed to move the shooting butt to a location outside of the monument’s boundaries, and checked the site for damage from the structure.

While Carn Glas was undamaged and Holyrood Park was successfully restored, other sites aren’t so lucky. If you know of a structure at a schedule monument that doesn’t have permission to be there, report it so we can take action to protect Scotland’s heritage.

Filming with a drone, or UAV, offers a whole new point of view on Scotland’s history. When seen from above, it’s clear how magnificent the shapes and designs of the properties we care for really are. 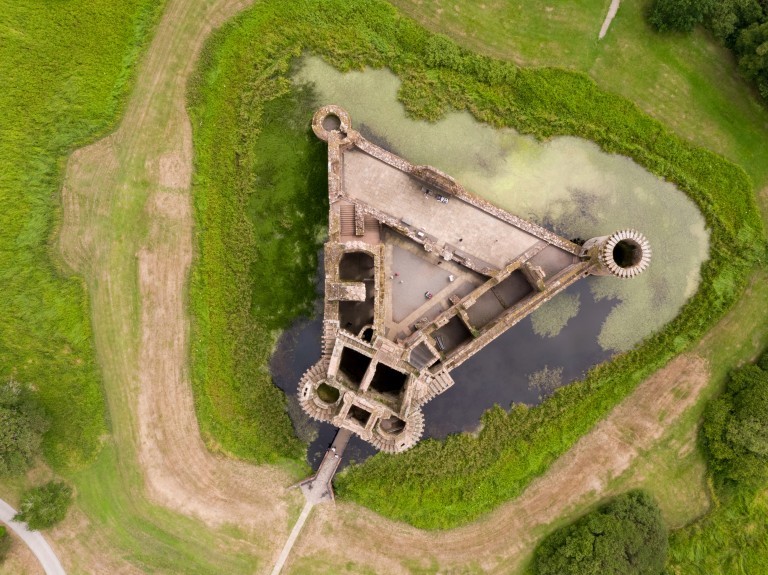 Photographs captured by a drone like this one can teach us a lot about Scotland’s historic places. But for the safety of both visitors and Properties in Care, we only allow registered pilots to fly UAVs when the sites are closed

As UAVs become more and more popular, we also have a duty of care to protect these historic monuments and ensure the safety of visitors and staff. From mechanical faults to pilot error, drones pose the risk of falling from heights or causing potentially irrevocable damage to historic places. The Wallace Monument was one victim of drone-related heritage crime in 2015.

At the places we care for, permission must be granted by us to operate a UAV. Only pilots accredited by the Civil Aviation Authority (CAA) will be approved. 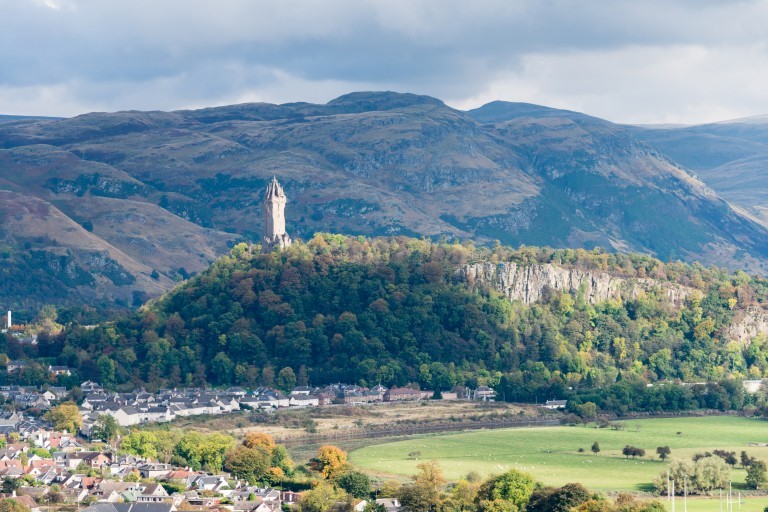 In 2015, a drone crashed into a window at the Wallace Monument in Stirling, not only causing damage to the monument but also posing a risk to visitors

Throughout the ages, visitors have felt the desire to leave personal markers by etching or spray painting names and symbols into some ancient wall or artefact. Once the act is complete, the historic fabric is altered. In the case of incised graffiti, it will never be the same again. 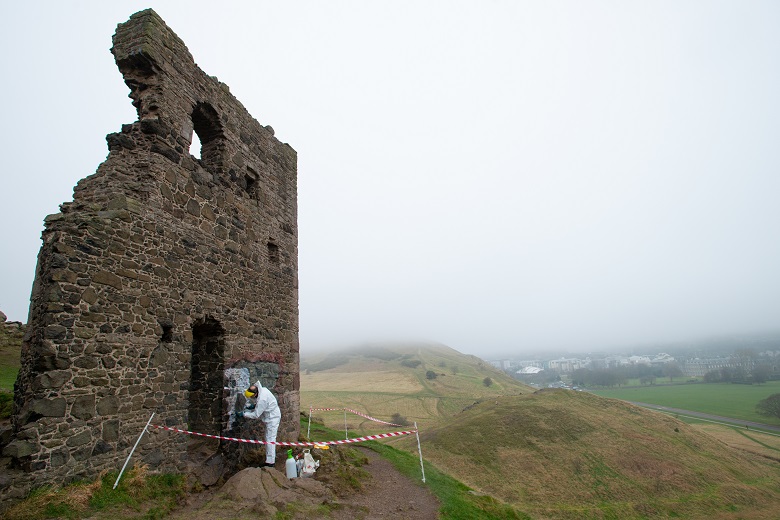 Small, remote and rural sites are often the ones that experience these challenges. Many locations, mostly in a state of preserved ruin, offer unhindered access. This is an attractive quality for many seeking to connect with Scotland’s heritage. But the ‘out of the way’ setting also offers criminal opportunists the ideal setting to vandalise sites.

Police Scotland are currently leading an investigation into graffiti scratched into the side of the Ring of Brodgar, Orkney. Anyone with information is encouraged to come forward. 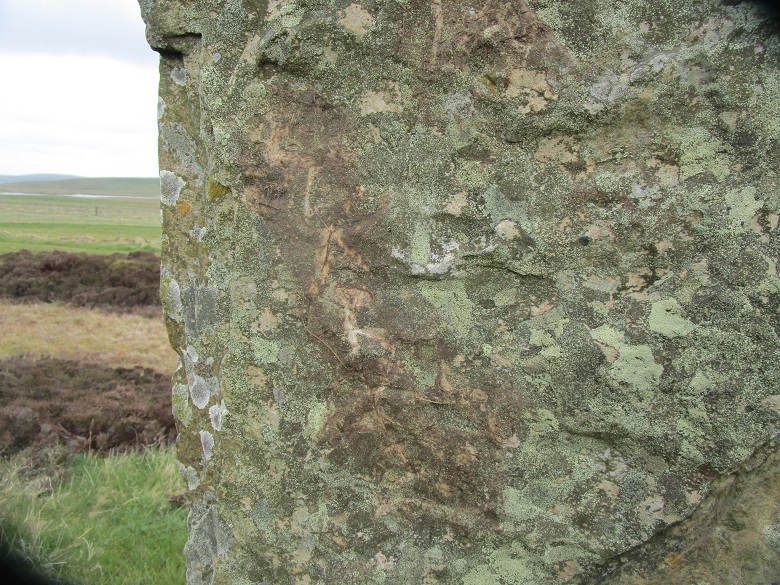 Once marks and graffiti are etched into historic monuments, they will never be restored to their original state

It’s impossible to staff every site and most scheduled monuments have no alarm systems or surveillance.

We need your support to help protect Scotland’s sites for future generations and raise awareness of heritage crime.

The most irreversible of all heritage crime is the demolition of listed buildings and scheduled monuments without consent. Thankfully, this is also very rare.

Listed buildings – places of special architectural or historic interest – have a legal status that means, where possible, they should be protected from demolition. Change can be necessary for places to thrive and sometimes the future of a listed building is uncertain. But before demolition is considered, the reuse and adaptation of listed buildings should be always explored.

Sometimes buildings cannot be saved, but the memory and records of them can be. Illegal demolition impacts on this opportunity to create a memory of place for future generations.

For example, when the planning system approves the demolition of a listed site, we’re given three months to undertake a Threatened Buildings Survey to capture information, photographs and data about the site. This full record of the site is saved in Canmore, the digital home of the HES Archives.

Find out more about our role in the planning system.

Join the fight against heritage crime

Despite the ravages of time, weather, environmental change, or even damage from ancient feuds and wars, so much of Scotland’s rich historic past remains accessible and discoverable to us all.

Heritage crime robs us of this history, and its cost and impact on communities is enormous – not just in monetary value but in social costs.

We need to prevent it happening, for everyone to benefit.

If you know of a heritage crime, report it to Police Scotland by calling 101 or contact Crimestoppers anonymously by phone 0800 555 111 and online at crimestoppers-uk.org.

Peter McGrath, a former police officer, is the Head of Physical Security for Historic Environment Scotland. Peter is engaged in a range of activity including raising awareness of terror related threat, harm reduction for staff and visitors, combatting heritage crime, tackling the impact of anti-social behaviour and improving site security. View all posts by Peter McGrath