Searching for the traces of our industrial past

Scotland from the Sky presenter James Crawford flies over the sometimes beautiful, sometimes haunting landscapes of Scotland’s industrial past.

The final part of Series Two of Scotland from the Sky is on at 9pm on BBC One Scotland on 1 May. In this blog series writer and presenter James Crawford explains how they used helicopters, drones, a vintage Tiger moth and remarkable photography from the HES archives to tell the story of Scotland’s industrial past. 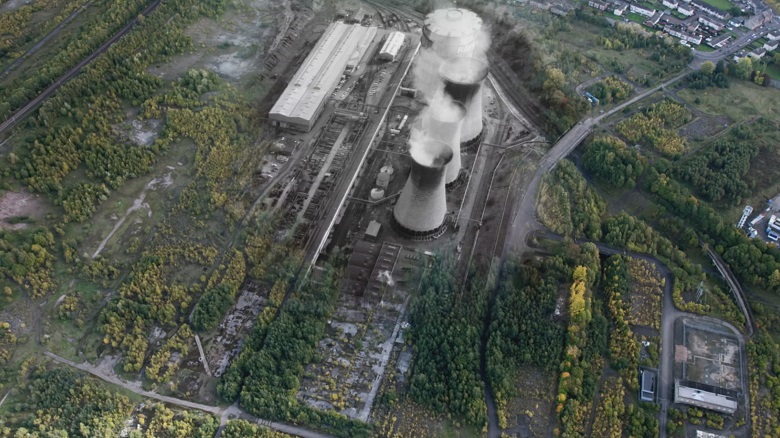 An image of Ravenscraig steelworks in 1989 is merged with the view of the same site today, from a helicopter

Think of ‘Scotland’ and ‘industry’, and most people picture grimy cities: mines, mills, shipyards and railways. They probably don’t think of a beautiful boat trip on the west coast of Scotland.  But that was where my journey started for the final episode of Series Two of Scotland from the Sky.

Just south of Oban there’s a whole network of islands.  On the last day of August last year, in beautiful sunshine, I headed off from Cuan sound to one of the smallest – Belnahua.

It’s a genuinely haunting place. Rusting machinery and ruined buildings point to an intensive industrial past, to work that changed the entire island forever. But to understand what happened here – what industry did to this island – it helps enormously to see it from the sky. 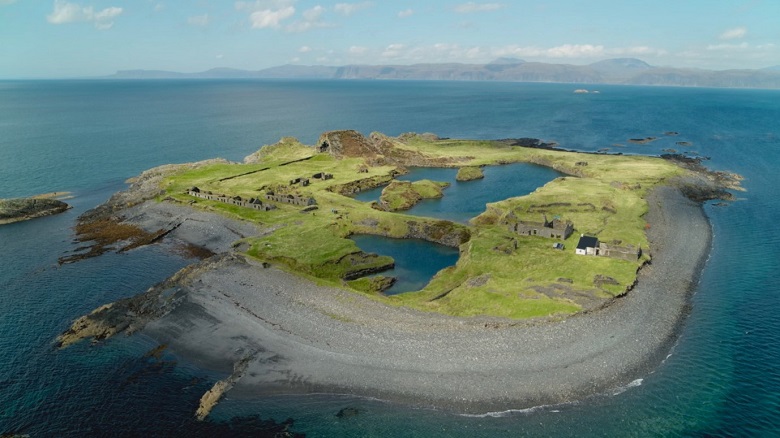 The tiny ‘slate island’ of Belnahua on the west coast of Scotland, viewed by drone

The island of Belnahua has been hollowed out. Massive industrial quarries – over 60 feet deep – were dug here for one bustling business: the production of slate. At the industry’s peak – at the end of the nineteenth century – Belnahua was home to over 200 people. But by 1920 the sea had broken into the deep quarries and flooded them, making them useless. The slate industry was ending.

From the air Belnahua’s story has is starkly clear. How this remote place provided the natural resource that supported a whole community. But also, how industry never stands still, it uses what it can and then moves on. And as it is for this one tiny island so it is for the rest of our country. 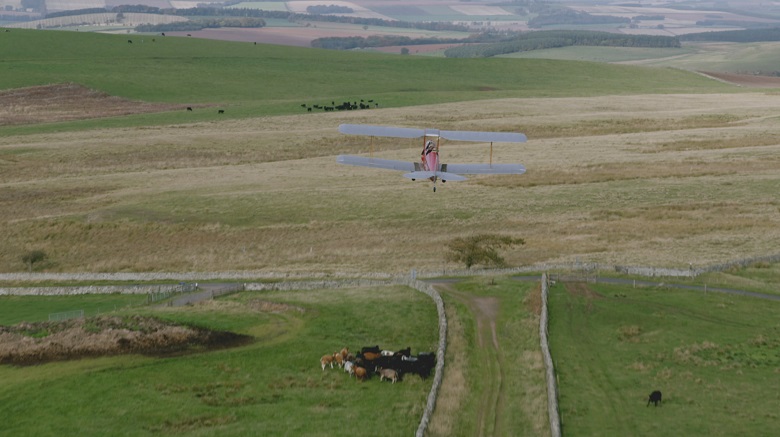 From Belnahua, we wanted to go much further back in time, in search of something that’s not industrial, but which would gradually help make industry possible. A road. But not just any road. We were looking for the first ‘main road’ ever built in Scotland – the work of the Romans nearly 2,000 years ago.

Using a vintage Tiger Moth, we set off towards the Scottish Borders, looking for what is known as ‘Dere Street’. It once ran for over 200 miles from the city of York all the way into Perthshire. You might imagine that a road this old would have disappeared completely, but in places, you can still follow its route through the landscape.

Seeing it from above was remarkable – not just to appreciate the skill and ambition of the Roman builders, but also to view how the past and present can still live side by side, as the ancient road merges with the modern one, to become the A68. 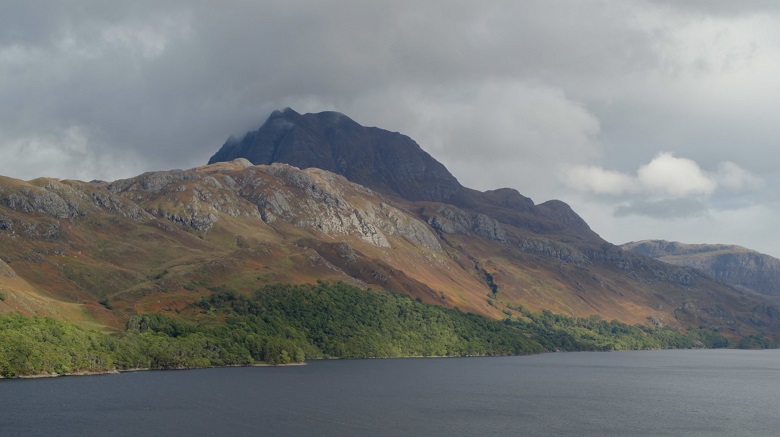 Loch Maree in Wester Ross, loomed over by the mountain of Slioch – an unlikely origin-point for heavy industry in Scotland

From the rolling hills of the Borders, we moved far to the north west, to Wester Ross. Our destination was Loch Maree. Unlikely as it may seem, this area was once a massive industrial centre. Alongside a fast flowing burn – known in Gaelic as Abhainn na Furneis, ‘the river of the furnance’ – we found the remains of what would become one of Scotland’s biggest industries: iron.

Today, all you can see are the slabs of a sandstone hearth and heaps of slag. But 400 years ago, this was the site of Scotland’s first ever blast furnace – using the wood from the surrounding forests to make ferocious heat to create iron. 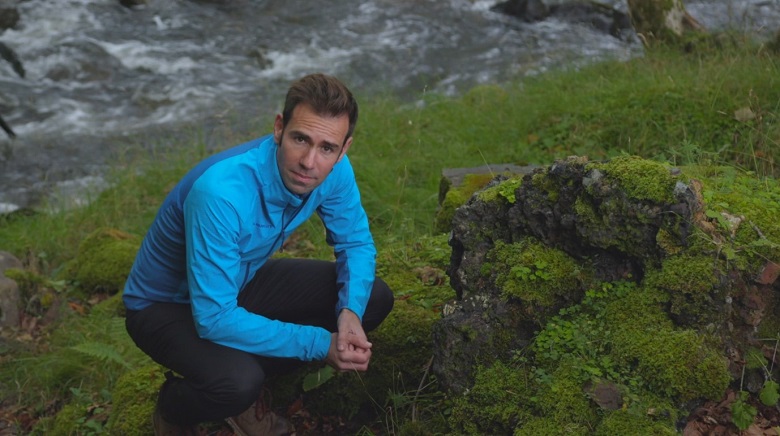 This whole landscape was put to work. 300 acres of forest a year were felled and burnt to make charcoal for the furnaces. Easy access to a sea loch allowed boats to bring in ore, and take away the iron – including many ‘great guns’, most likely cannons, being fabricated and sold to customers in the Netherlands.

From these beginnings at Loch Maree, we wanted to track how heavy industry came to take over and transform Scotland’s Central Belt. Our next stop was a business that began near Falkirk in 1759, and would grow to become one of the biggest and most important iron works in the world: Carron.

‘From railway stations in Brazil to Maharajahs’ palaces in India’ 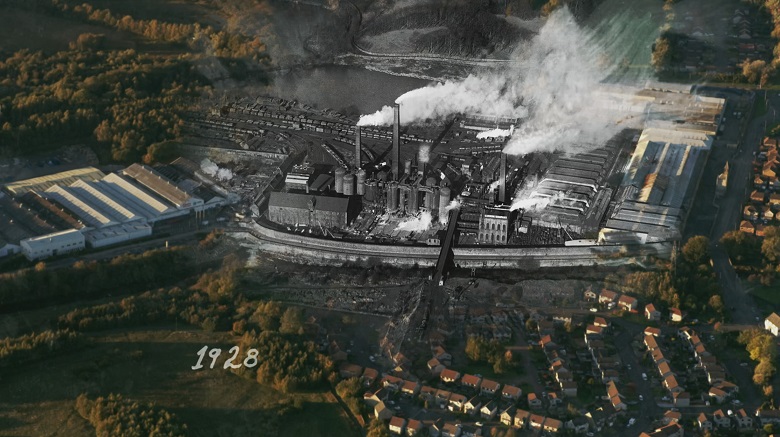 The Carron iron works led the way for the vast industrial sites that would spring up all over the Central Belt: coal mines, quarries, factories and shipyards.  As David Mitchell, HES Director of Conservation explained to us, ‘Scotland was the largest exporter of architectural iron products in the world for about 80 years. Everything from railway stations in Brazil and Maharajahs’ palaces in India, we are all made in Scotland’.

To truly grasp the huge impact of heavy industry on this part of Scotland, we needed a helicopter. Taking off from Cumbernauld, we began to track the – often monumental – traces that have been left behind. From giant spoil heaps created by coal mining at Harthill, and the remarkable ‘Five Sisters’ bing in West Lothian, we travelled on to Scotland’s largest bing: Greendykes. A huge by-product of the shale industry, Greendykes is now a national monument. It was a place I was obsessed with as a boy. I used to think it was like the surface of Mars. I never thought that the first time I’d get to the top would be by helicopter…

The end of heavy industry?

We continued on to what, for me, was Scotland’s most iconic industrial plant: Ravenscraig. In its heyday it was the largest steel-maker in Western Europe – producing some two million tonnes per year.  Today it is Europe’s largest waste ground – 1000 acres, so large you could fit 700 football pitches inside it. We brought our helicopter down in the footprint of the iconic blue Ravenscraig gas holder to talk to two of the people who had worked in the plant, and had seen it come and go. 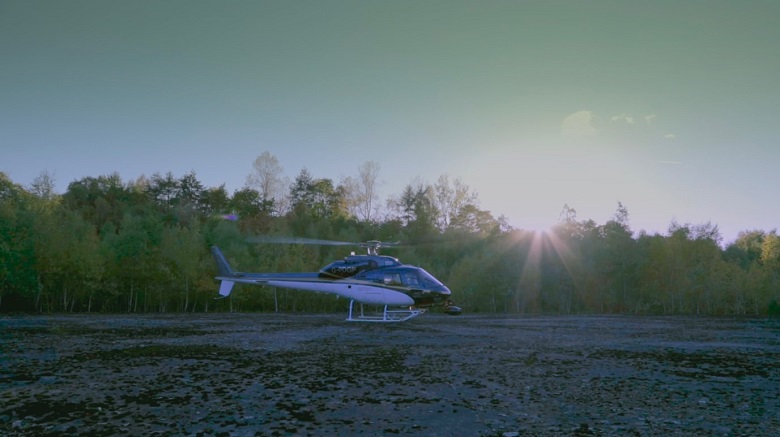 The arrival of ‘Black Gold’

After Ravenscraig, headlines talked of the end of heavy industry in Scotland. But not quite. Resources on the far edge of the country were already regenerating our industry – and making a living for so many Scots… including my dad.

In the summer of 1977 he arrived in Shetland.   It was the oil boom, and he’d come to help build the colossal Sullom Voe oil terminal. My dad was one of many thousands of Scots who got on planes and ferries to travel there.  You have got to wonder what many of them thought of such a remote and starkly beautiful landscape.  But I know what my dad thought. One of the biggest construction jobs in the world? He couldn’t wait to get started. It was a young engineer’s dream. 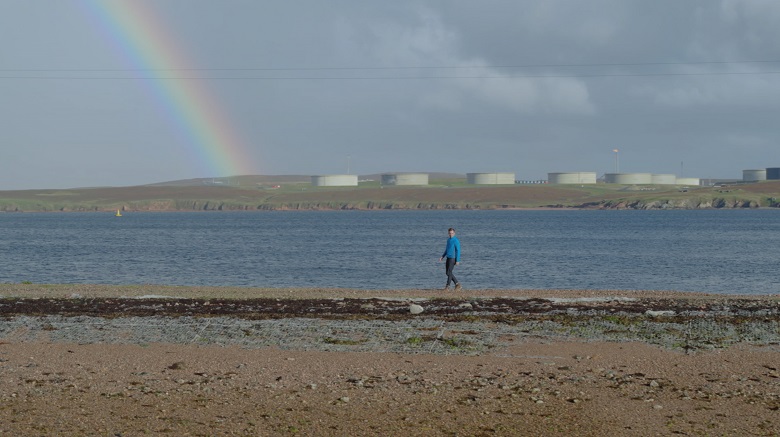 Black gold at the end of the rainbow – the Sullom Voe oil terminal, Shetland

In just a few years, an empty peninsula was completely transformed. Ten million cubic metres of peat were moved to lay 300,000 cubic metres of concrete, 25 miles of road and 150 miles of pipeline.

I was born on Shetland in 1978, a year after my father arrived on the islands. This was the beginning of the oil boom in Scotland. But in my lifetime, I’ve seen the business pass its peak. One day, this industry too will disappear.

But its traces and memories will not. And what we hope this episode shows is that, when we look down on our past from above, we can still see our industries – and the stories of the people who have worked in them – written all over our landscapes.