Rosie from our Designations Team explains why we’re reviewing the listing of thatched buildings across Scotland, from the Hebrides to the Borders.

Did you know there’s a long tradition of using thatch here in Scotland? Thatch as a roofing material can be traced back to prehistoric times! In some rural areas, it remained the most common domestic roofing material until the end of the 19th century.

We also have one of the most diverse ranges of thatching materials and techniques found in Europe. As each community used materials gathered close to home and techniques suited to the weather conditions, distinctive local traditions emerged.

Today though, the number of traditional thatched buildings is decreasing. The reasons for this are complex and numerous. They are linked to changes in land use, housing and rural populations, as well as the availability of skills and materials. There are now only around 200 buildings with thatched roofs in Scotland.

Still, the survivors are important in helping us to understand this traditional skill and local building traditions – and of course they make up a hugely important part of our built heritage. Here are a few of our favourites…

The Scottish Borders and Leyden’s Cottage 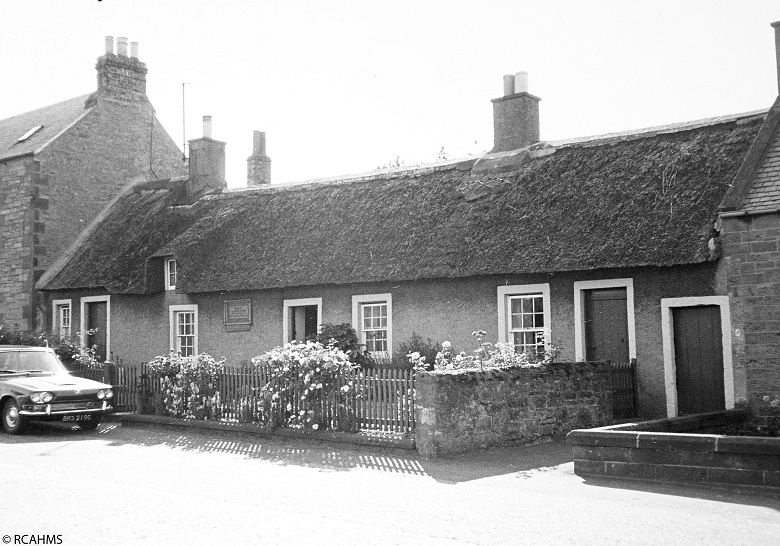 Denholm was a village for farm workers, but during the late 18th century the village was developed into a centre for stocking making that served the Borders as well as Edinburgh and Newcastle. The larger ground floor windows in Leyden Cottage show that it was adapted for weaving, as natural light was important. 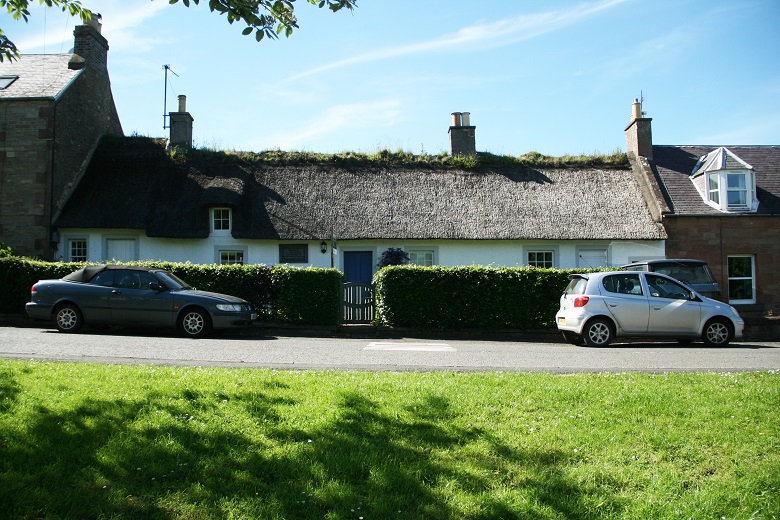 The cottage is named after the 18th century Scottish poet and linguist, Dr John Leyden, who was born in the cottage in 1775. His association is recorded in a carved plaque next to the front door.

In rural Perthshire, but now close to the A90, is the village of Rait, where a group of three thatched buildings survive. These buildings are remarkable because they take the form of a pre-agricultural improvement fermtoun – a group farm settlement of several tenant farmers’ dwellings and outbuildings. 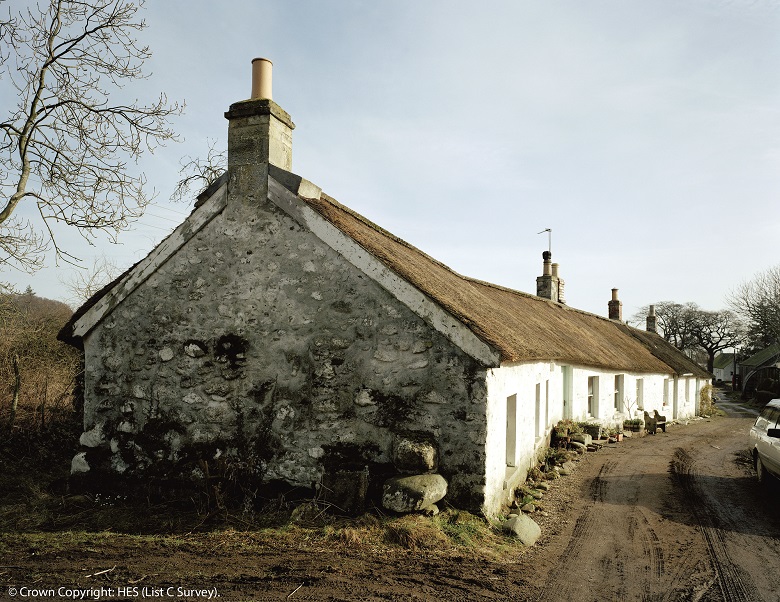 The survival of such a settlement pattern is extremely rare as they were normally erased during the agricultural improvements of the 18th and 19th centuries. In the early 18th century a turnpike road was built to the east of Rait, isolating the settlement, and this may be one of the reasons the buildings survive today.

The cottages are constructed using traditional materials and methods, such as thick rubblestone walls and a reeded thatch roof. The long and linear footprint of the building follows the natural features of the site, as the walls are skewed to follow the line of the road and the burn.

Some of these buildings can be found in Ruisgearraidh, the largest settlement on the island of Berneray. Located around Loch Bagh, on the east side of the island, Ruisgearraidh is a haven from the Atlantic Storms and a natural location for its harbour, which attracted significant numbers of settlers in the past.

Thatched buildings at Ruisgearraidh are typically single-storey, with a kitchen at one end and a bedroom at the other. The straw or marram thatch is fixed by a lattice of ropes and now nets or chicken-wire which is secured by stones.

You might not normally think of our cities having thatched buildings, but tucked away just outside Edinburgh is a unique collection of 18th century thatched cottages. Located at the base of Caerketton Hill and largely hidden from view by woodland, Swanston is one of Edinburgh’s most picturesque villages and has remained largely unaffected by the expansion of the city.

The thatched cottages are the earliest buildings in the village and are arranged to form two sides of a square with a village green in the centre. At the end of the Second World War the cottages were very basic, with earth floors and no water and electricity. By 1954 they had fallen into a bad state of repair. Between 1959-62 the nine cottages were converted into seven renovated dwellings. Many of the cottages still have reed thatch from the River Tay, and the concrete ridges date from the restoration.

This museum at South Voe is a restored 19th century Shetland small-holding or farmstead. These were once numerous across the highlands and the northern isles of Scotland but are now extremely rare.

There is a crofthouse with its associated farm buildings including a circular grain-drying kiln, a byre (cattle-shed) and a walled kailyard (kitchen garden). The buildings date to around 1850 and were used until the late 1960s. In the 1970s, they were restored and fitted out as a museum. Thatched buildings in Shetland are usually single storey and made up of two or three rooms and thatched with black oat straw. The low, curved form of the roof allows the wind to travel over the roof easily. This reduces the noise inside the building as well as potential damage to the roof in high winds.  A flagstone is tied to the net or ropes across the roof and neatly weights the thatch at the eaves. The Shetland Crofthouse Museum also has an unusual thatched chimney stack.

Inside, the buildings have been restored with salvaged material where possible and they have timber box beds, a peat fireplace and animal stalls.

The museum is open to the public seven days a week from 1 May to 30 September.

We’re continuing to look at ways in which thatched buildings, and other vernacular heritage, can be better recognised, protected and managed. In the Designations Team, we’re undertaking a review across the country of buildings which are thatched or are recorded as once having been thatched at the time of listing.

We’ve recently updated the records for over 50 listed thatched buildings as well as adding some buildings to the list. In around 20 cases we have changed the category of listing in recognition of the rarity of this building type. For example Swanston Cottages, Shetland Crofthouse Museum and Leyden’s Cottage are all now listed at category A.

The updated listed buildings records can be found by searching our portal.

Our review work continues and we will soon be visiting the Highlands and Argyll and Bute.

You can learn more about the listing review of thatched buildings by downloading our introductory report.

You can also download our Survey of Thatched Buildings.

Fancy getting up close to a thatched building? Visit the fascinating Arnol Blackhouse on the Isle of Lewis.

Rosanne is a Senior Designations Officer in our Heritage Directorate. Her job includes assessing buildings for listing. View all posts by Rosanne Watts