Ahead of the Glasgow Mela this weekend, we join Saqib from Colourful Heritage to delve into Glasgow’s South Asian heritage.

South Asian migrants are a well-known part of the Scottish society that have worked, contributed and settled in Scotland for over half a century from present day Pakistan, Bangladesh and India.

Today there are over 50,000 South Asians in Glasgow. Have you ever wondered what motivated them to travel half way across the world to a foreign land? And what positive contributions have they have made to Scotland? 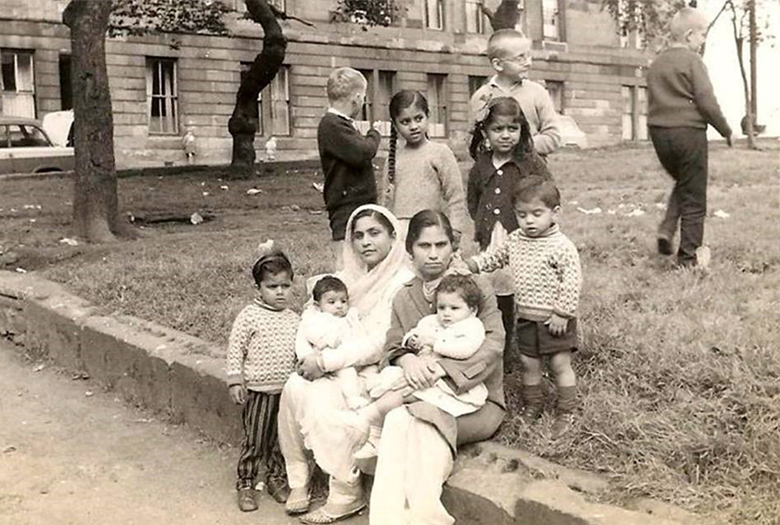 The Bhatti and Sadiq family gathered outside on Grafton Square, Glasgow – circa 1967.
Photo Credit – Bhatti family.

Almost all of the South Asians came to the Gorbals area as economic migrants with just a few pounds in their pocket and no English language skills. They very often created their own jobs as pedlars – selling garments door to door from a suitcase, usually in remote locations in order to provide a service to the public.

One such gentleman was Yaqub Ali who came to Glasgow in 1952 and started working as a pedlar. These jobs helped to improve their linguistic and social skills thus helping them to open up other self-employed businesses and take up other professions. 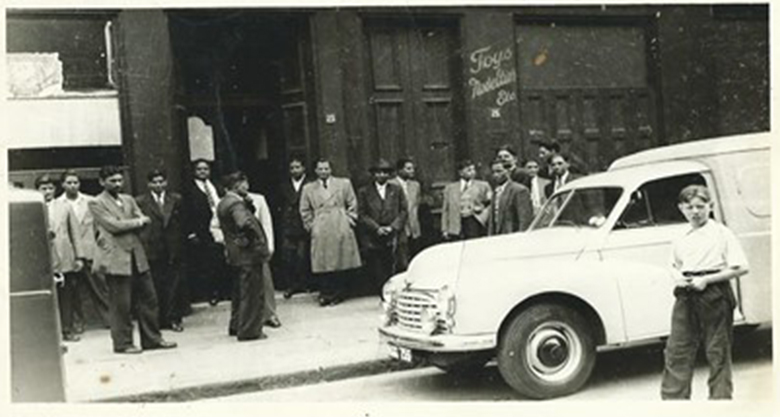 Many men such as Ghulam Nabi Choudhry also worked on the transport system as bus conductors and drivers during the 1960s. They worked long hours and took on overtime to maintain not only their own family in Scotland but their extended families in India and Pakistan. After all that was their purpose for coming!

As they learned to continuously adapt and innovate, many went on to open their own businesses . Shops and restaurants were popular ventures. In 1970, the nation’s favourite curry – Chicken Tikka Masala – was invented by the Shish Mahal restaurant in Glasgow which was a hugely popular restaurant. 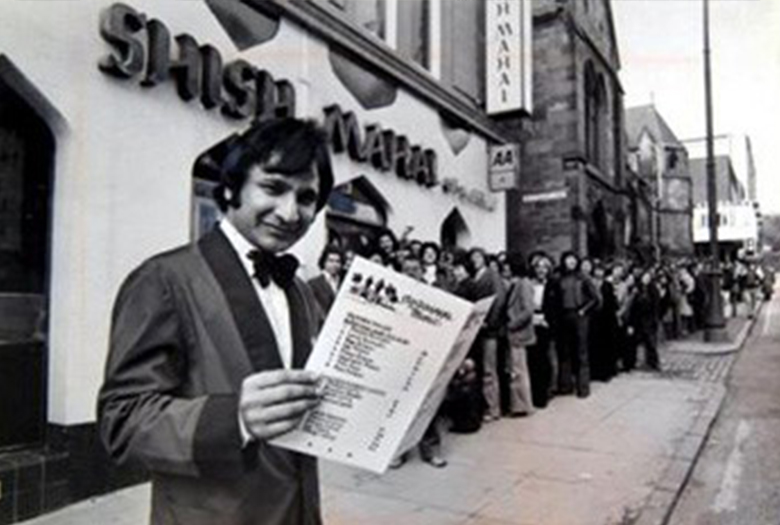 And remember Yaqub Ali who arrived in 1952 and worked as a pedlar? Well, in 1983 he opened Castle Cash & Carry in the Gorbals. At the time, this was the largest wholesale warehouse in the whole of Europe. Mr Ali also donated the largest single amount of £500,000 to Strathclyde University in 1997 to fund oversees students from Pakistan.

South Asians have also made progress in civic society. The political involvement started with the election in 1936 of Scotland’s first Asian councillor, Dr. Jainti Dass Saggar. Dr. Dass served the city of Dundee till his death in 1954.

These pioneers paved the way in 1994 for the first female Justice of Peace, Mrs Farkhanda Chaudhry. 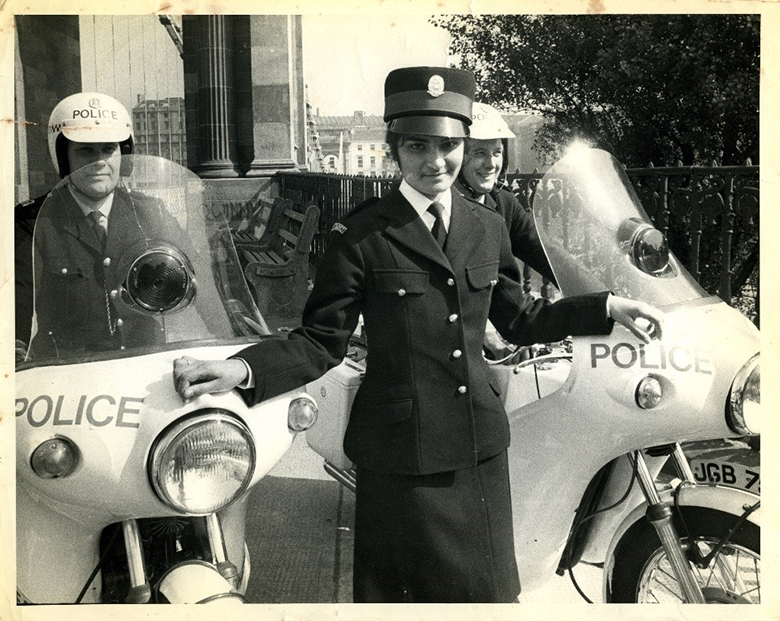 In 1933 Mr. Atta Ashrif setup the first Muslim Association (Jamiat ul Muslimin) in Glasgow. The aim was to help fundraise to establish Glasgow’s first mosque. It took over a decade, but in 1944 the first converted mosque opened at 27 Oxford Street, Gorbals.

You might think the top floor of a tenement is an an unusual site for a place of worship.  But in 1954, the first Sikh Gurdwara was created in 79 South Portland Street, Gorbals. 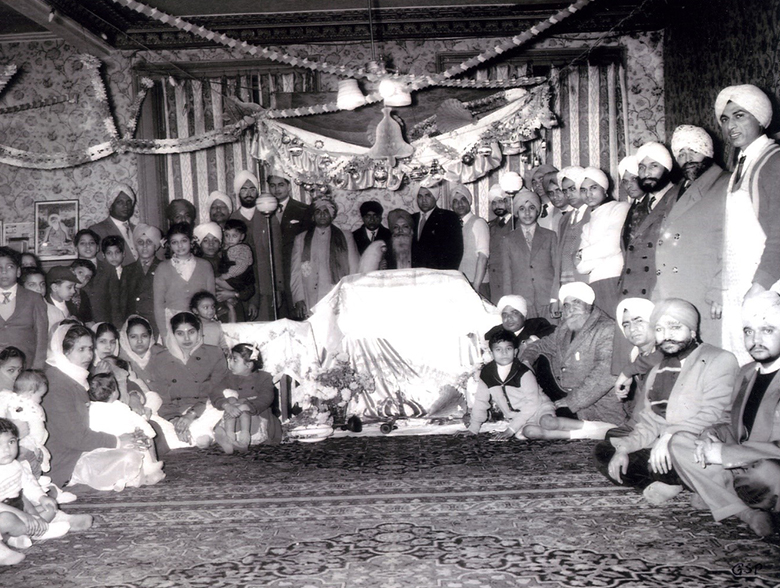 We might think that international signings in football are a relatively new phenomenon. But did you know that in 1936 Celtic FC recruited a player from India? Abdul Saleem from Kolkata came to Glasgow to play for the club. He regularly played barefooted wearing only bandages as this was normal practice for Indians in India.

In 1979 the first Scottish Asian Ikhwan football team was set up in Glasgow. Maqbool Ahmed managed the side who were described by contemporary news reports as “ever-so-polite”.

More recently, two of Glasgow’s young South Asian women have done us proud. Aminah Din is a footballer who and a fully trained Scottish Football Association coach. In 2015 she was awarded ‘role model of the year’ at the Scottish women in sports awards and was a finalist for a Young Scot Award in 2016. In recent years Abtaha Mahin Maqsood has been selected to play professional women’s cricket for Scotland. Abtaha is off to Spain with the Scottish team for the ICC Women’s Qualifier Europe later this month. We wish them good luck!

Colourful Heritage is the first and largest community focussed charitable initiative in Scotland aiming to preserve the South Asian and Muslim heritage in Scotland. We have created the largest online archive of video stories from the elderly South Asians that came to Scotland.

We passionately believe it is vitally important to preserve our heritage for our current and future generations to look back with pride and learn valuable lessons and insights.

For further information, log onto our website www.colourfulheritage.com to watch some fascinating stories told by our South Asian elders themselves. Follow us on our Facebook and explore our growing digital timeline to learn further interesting facts about South Asians in Scotland.

We have also partnered with Glasgow Life to launch the Bashir Maan archive at the Mitchell Library and the GlaswegAsians exhibition at Scotland Street School Museum.

Keep up to date with Colourful Heritgae:

Saqib Razzaq is a Project Officer with Colourful Heritage and is involved in video interviewing the South Asian elders to capture and preserve their story. She adds new entries to the Colourful heritage digital timeline and working with Glasgow Museums staff to update the GlaswegAsians exhibition.