Edinburgh’s Portal to the Past

Our World Heritage team recently worked with over 100 students from Edinburgh College, using the Old and New Towns as inspiration for an interactive event. Here’s how it went…

This year, our World Heritage team have continued the great work they started during 2018’s Year of Young People. They’ve been encouraging creative students to engage with the Old and New Towns of Edinburgh World Heritage Site for inspiration!

Last month, over 100 of Edinburgh College’s Dance, Music, Costume Design, Hospitality and Computing students turned Riddle’s Court into an interactive exhibition space. The aim of the game was to showcase periods of Edinburgh’s history in exciting and innovative ways.

Did you know that Riddle’s Court held a royal banquet for King James VI in 1598? With this in mind, our groups of students used this very venue, and the occasion, as inspiration for their event.

It all kicked off with a really special performance of the ‘Canario’ – which was a courtly dance of the time. The accompanying music was recorded in the Straloch manuscript from the early 17th century too. Budding musicians recreated this superbly – with one student even taking up the lute for a truly authentic rendition! 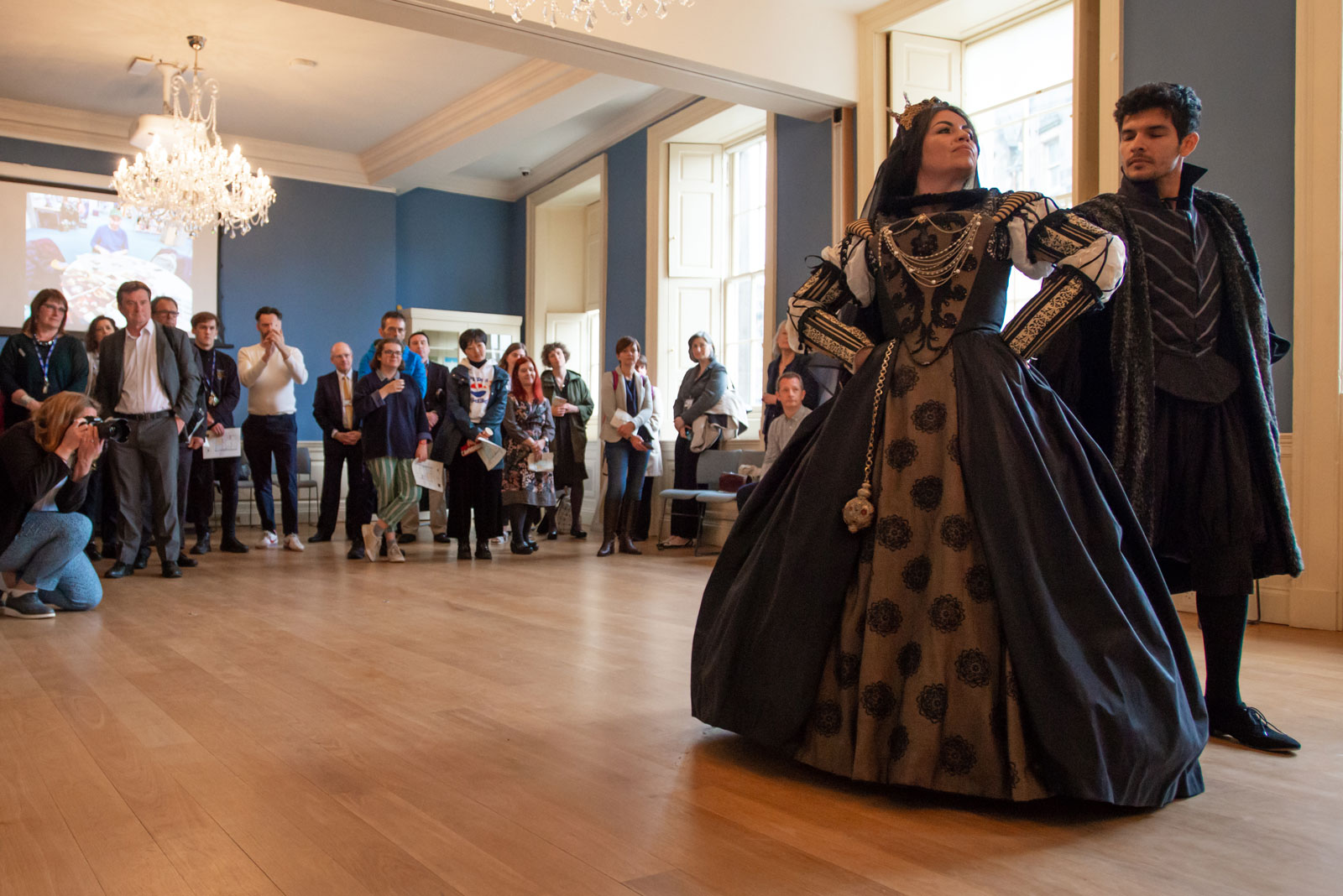 The costumes worn by the performers were also roughly of the period too. Costume Design students produced their own interpretations of the clothes worn at the royal event. These were displayed on the screens around the Library while the performance took place!

A taste of historic Edinburgh

It wouldn’t be a royal banquet without food, and the catering certainly didn’t disappoint!

You might remember earlier this year we shared a few historic recipes that Hospitality students used during the Eurocities conference. Well, they were all back at it with even more tasters from Scotland’s culinary past… 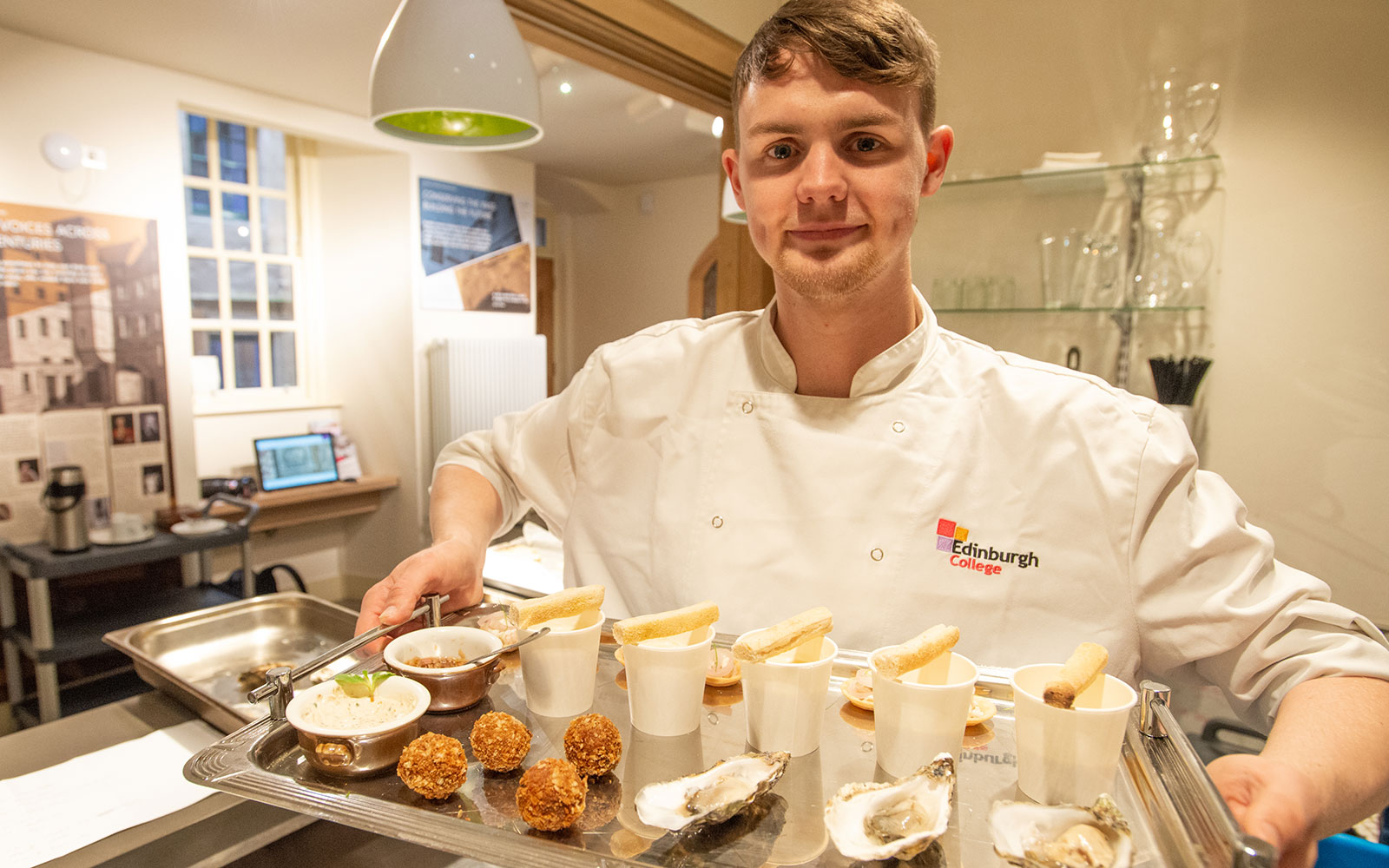 There are a few surviving relics that help to tell the story of the 1598 banquet at Riddle’s Court. This meant the students were able to build on their previous experience of producing ‘Auld Reekie’-inspired meals. Even the shopping list for the original event was available from Edinburgh City Archives!

There was the return of the infamous eel pie, and Mrs MacIver’s original ‘Scotch Haggies’. However, guests were also treated to oysters, haggis bonbons, French-style fougasse bread, and sugared plums!

Facetime with a twist

After the performance, guests were given freedom to explore the rest of Riddle’s Court. Students’ exhibits focused on the banquet of 1598, right through to the period of Georgian Edinburgh.

A series of maps, images and portraits filled the rooms in the upper levels of the building. At first glance, it all resembled a fairly typical exhibition about Edinburgh’s history… 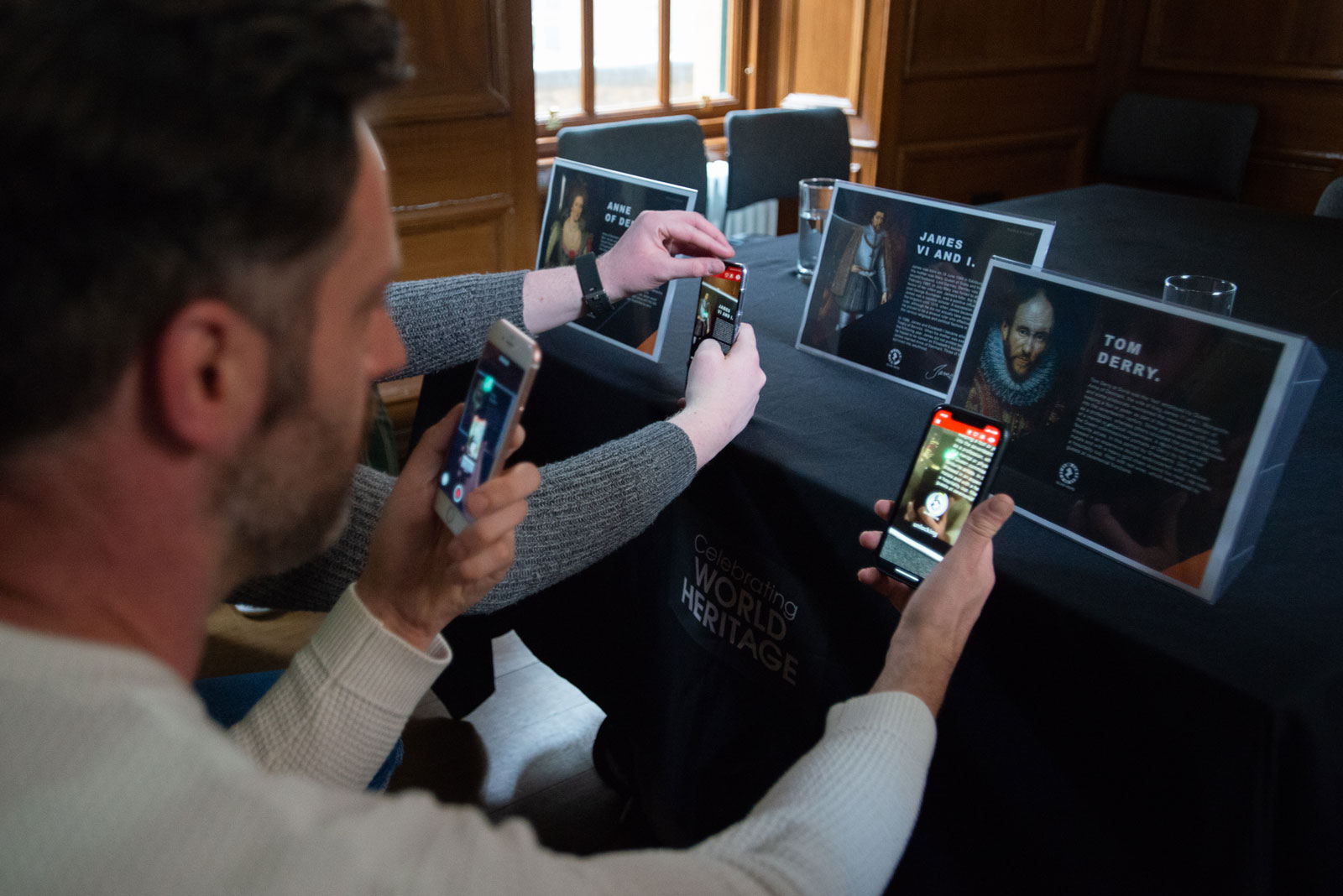 However, each exhibit contained a small lightning bolt symbol. When scanned on a mobile phone using the ‘ZappAR’ app, the exhibits then came to life! This was done with on-screen augmented reality features created by the College’s Computing students.

In the McMorran Room, there were several portraits of historic characters who had visited Riddle’s Court in 1598. Hovering the ZappAR scanner over the code opened the phone’s self-facing camera. It then projected the character’s face onto the unsuspecting visitor’s!

The fun continued in the Geddes Room, as visitors made their way through a range of interactive exhibitions. These took in features from the banquet of 1598, right up to the building of Edinburgh’s New Town. 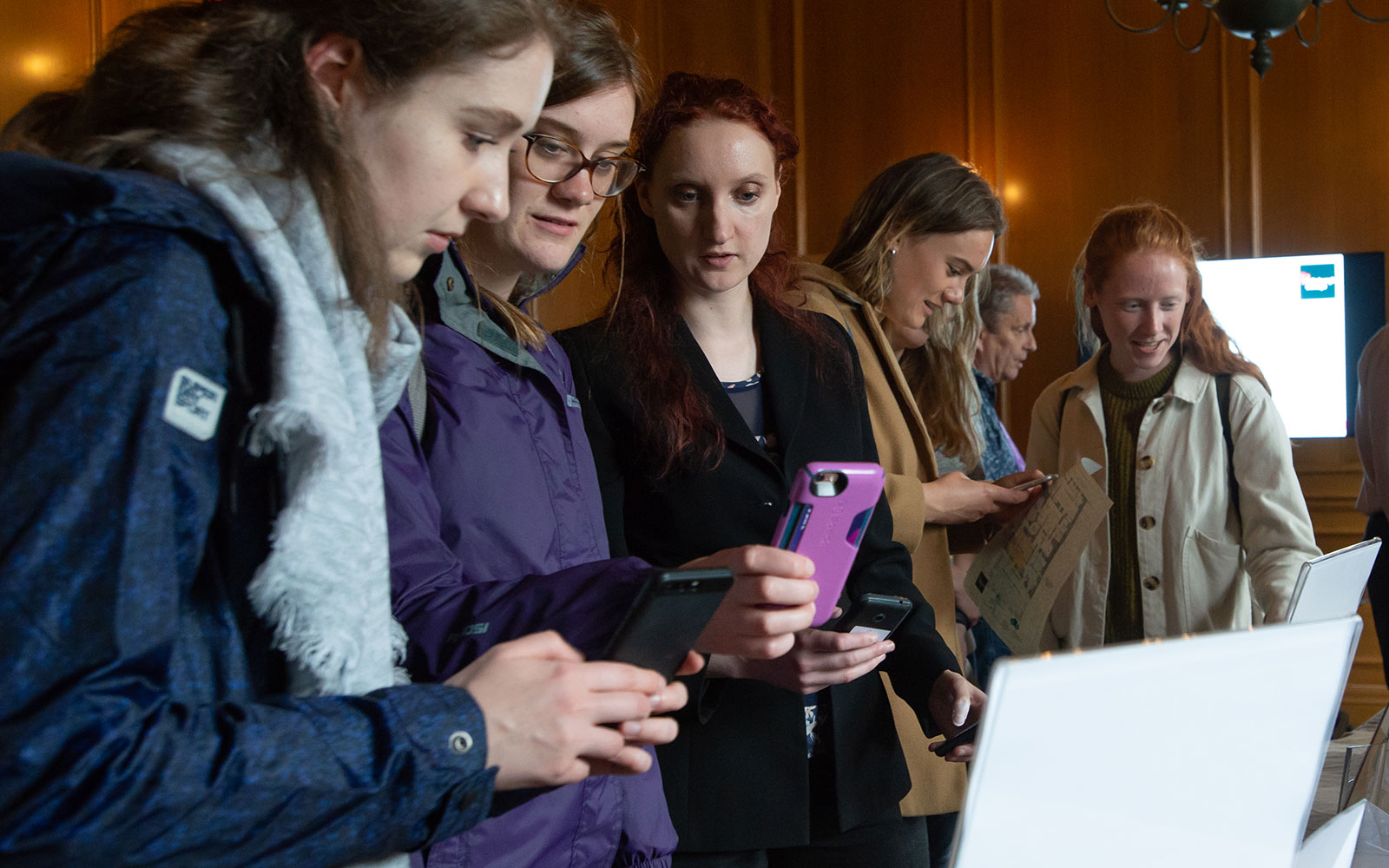 ZappAR codes displayed videos, images and whole websites created by the students. Elaborating on what appeared on the posters and placards, some even provided translations for speakers of languages other than English!

It was a fantastic display of the students’ creative talents. They posed really interesting ideas for how museums and galleries can become more engaging for audiences in the future!

Through in the Seton Room, the focus changed to ‘Auld Reekie’ in Georgian times once again. This took inspiration from our World Heritage team, and their fantastic ‘Auld Reekie Through the Keyhole’ handling box. The computing group used this to develop interactive maps of both the Old and New Towns of Edinburgh.

Again, by scanning the symbols on the map, information about the characters and locations would appear on visitors’ smartphones. A group also made an audio version, which shared the information aloud when the tag was scanned.

There was even a group who created 3D models of how the New Town would have looked when it was first built. This appeared on the screen over the top of the physical map. It allowed visitors to walk around the 3D model using the ZappAR app. You really got a sense of what the city was like when it was brand new! 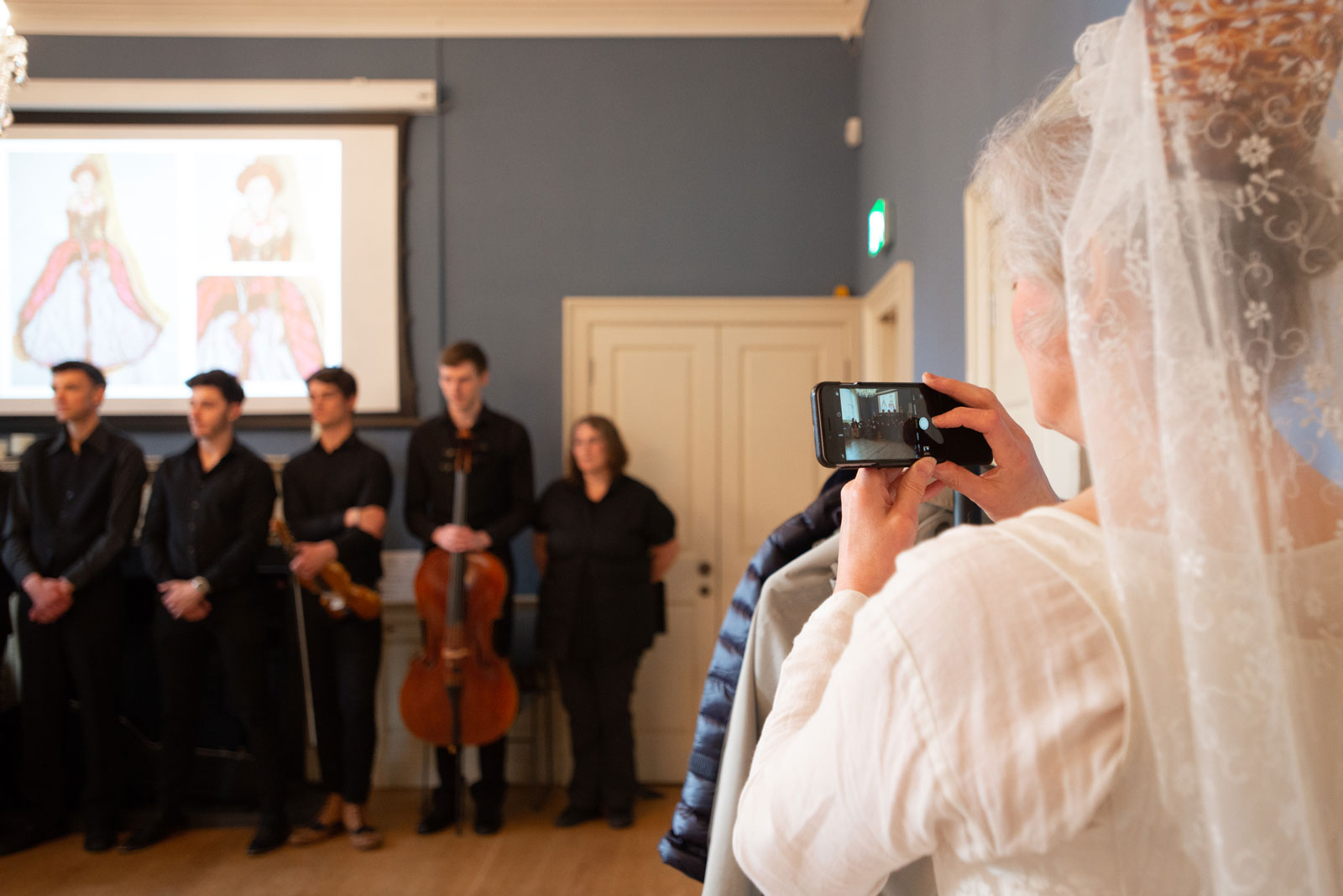 Auld Reekie Through the Keyhole

The ‘Portal to the Past’ event was the ideal way to showcase all of the hard work that has gone into the project over the last 18 months.

It has been a great way of bringing the Old and New Towns of Edinburgh World Heritage Site to new audiences, and has generated some great ideas for engagement in the future.

The ‘Auld Reekie Through the Keyhole’ handling box – the original stimulus for the whole project – is being added to at the moment. When it’s ready to go, groups will be able to borrow this as inspiration for their own World Heritage projects. So watch this space!

A huge thanks and ‘well done’ to all of the students and staff from Edinburgh College, and everyone involved in the project from the Patrick Geddes Centre, Riddle’s Court, Scottish Historic Buildings Trust, and our very own World Heritage team! Special thanks also to David Hicks, who has managed the project from start to finish!