Housing the Heroes: The 1919 Housing Act

August 2019 marks the centenary of the Scottish Housing Act, a landmark piece of legislation which led to the widespread provision of council housing. 100 years on Steven Robb looks at the Act and its legacy.

However, the Act went far beyond wartime rhetoric in its desire to address issues as diverse as poor health, the failure of the private housing market and political unrest.

‘A healthy family in a healthy home’

The Act, for the first time, compelled councils to assess their local housing needs and provide homes for the working classes. However, aware of high post-war building costs, the State provided the lion’s share of funding and capped a council’s financial liability at a low level.

Scotland’s separate Act hoped to address the problems highlighted in a Scottish Royal Commission Report of 1917. It found that a lack of decent homes had led to overcrowding. Almost 50% of Scottish families lived in one or two-room flats. The Act pushed for the objective to be ‘a healthy family in a healthy home’.

By the time the Act passed many schemes were well advanced. A new Scottish Board of Health sanctioned all council proposals. 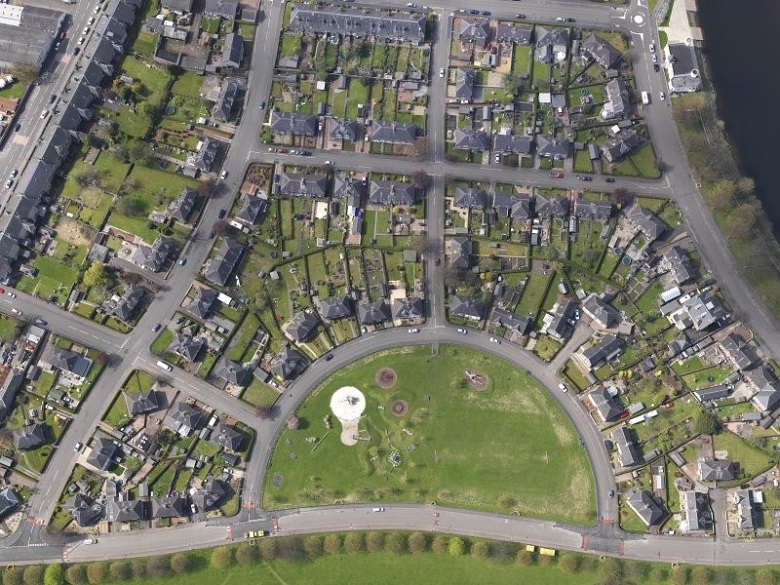 Aerial view of Waverley Crescent in Riverside, Stirling. It shows a crescent of semi-detached cottages and cul-de-sacs overlooking a park. Note the generous front and rear gardens.

Housing designs and layouts were heavily influenced by the Tudor Walters Report (1918), and wartime developments at Rosyth and Gretna.

The State’s ideal was an individual house or cottage within a low density plan of around 12 houses an acre. It would be set within a garden city layout with tree-lined roads, open spaces, cul-de-sacs and geometrically curved street plans. Architecturally, many developments would be designed in a weak Arts & Crafts style with pitched slate roofs.

Lou Rosenburg, in his book Scotland’s Homes Fit for Heroes (2016), has calculated that around 60% of all 1919 Act houses were built as cottages. This included huge estates such as Glasgow’s Mosspark and smaller estates such as Stirling’s Riverside.

Scottish families generally lived in few (but larger) rooms and the tenement tradition led to a desire for one-floor living. Such considerations gave rise to a Scottish hybrid, half-way between cottage and tenement. 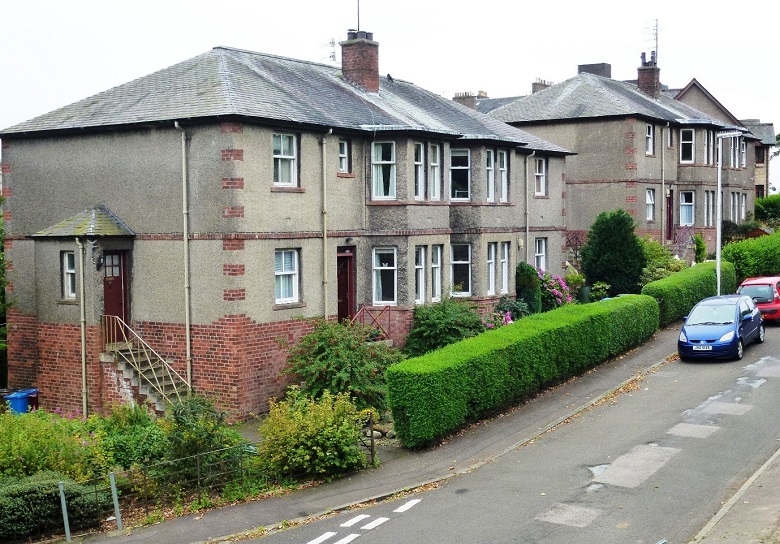 Logie in Dundee.  One of the first 1919 Act schemes used ‘4 in a block’ housing also known as flatted blocks or cottage flats.  The front doors accessed ground floor flats and those on the side the upper floor flats.

The flatted block or ‘four in a block’ contained four houses under a hipped roof, and could be adapted to garden-city layouts. Used in about 30% of housing schemes, their popularity would later accelerate.

The Scottish tenement, discouraged but not forbidden in the post-war period, was scarcely used in 1919 Act housing. However, as pressure increased to raise densities and house tenants near their workplaces, the tenement was gradually rehabilitated in the inter-war period, especially in city centre locations.

Subsidies favoured brick construction, with over 80% of houses brick-built. They were frequently rendered to cope with Scotland’s climate, and lack of skilled bricklayers. High costs saw some authorities look at alternatives, including concrete blocks, although these sometimes failed to withstand Scotland’s rain. 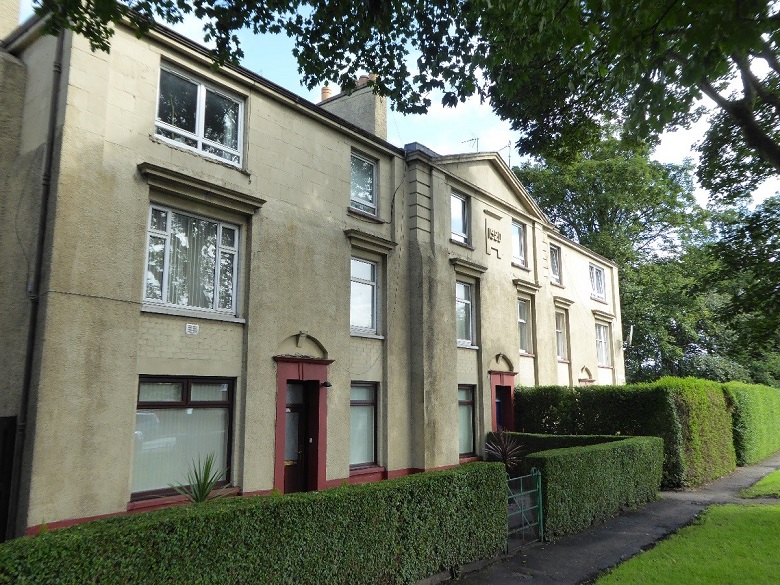 Ferry Road, Leith. One of the very few tenements built under the 1919 Act, designed by George Simpson, Leith Corporation’s Architect, just before Leith was subsumed within Edinburgh.

Another alternative was stone. It was used in one in ten developments. In 1919 the costs of stone and brick were almost comparable, but later when brick prices fell, stone fell from favour. Some authorities tried to use stone, both for its quality and increasingly for its Scottish character, addressing criticisms that State subsidies had favoured English housing models. Dundee also used stone to help safeguard jobs in local quarries.

The Act’s provisions also allowed for the overhauling of existing buildings. Edinburgh provided over 100 houses within reconditioned historic tenements.

The rising cost of housing

The 1919 Act housing was built in a post-war period with rapidly rising building costs, due to a lack of skilled workers and an acute lack of building materials exacerbated by nationwide demand. Consequently, the cost of a standard house rose from around £300 in 1914 to over £1000 by 1919.

Although many councils intended to prioritise ex-servicemen and their families, the high build-costs were passed on to their tenants in the form of high rents. This meant occupation by the skilled working or even middle classes. 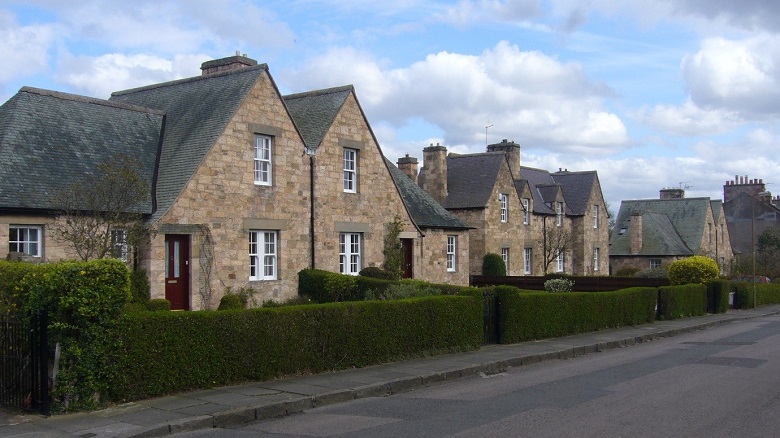 The State soon baulked at such unsustainable open-ended expenditure. In mid-1921 the Act’s provisions were withdrawn as part of wider economies. Housing ground to a halt, until new Housing Acts in 1923, and especially 1924, revived the process.

However, although the new Acts now included provision for poorer tenants, the subsidies to councils were far less generous. The resultant housing was at a much reduced specification, in design, layout, accommodation and materials. Costly cottages were regularly phased out, replaced by flatted blocks or tenements, and less bedrooms were provided.

The 1919 Act provided around 25,000 houses spread throughout the country from the border to Shetland in over 300 separate schemes.

Although the figure was way less than the 1917 Royal Commission had called for, the Act firmly established the concept of municipal housing provision, which was particularly popular in Scotland. It also provided some of century’s best social housing, designed by both council and private engineers and architects. 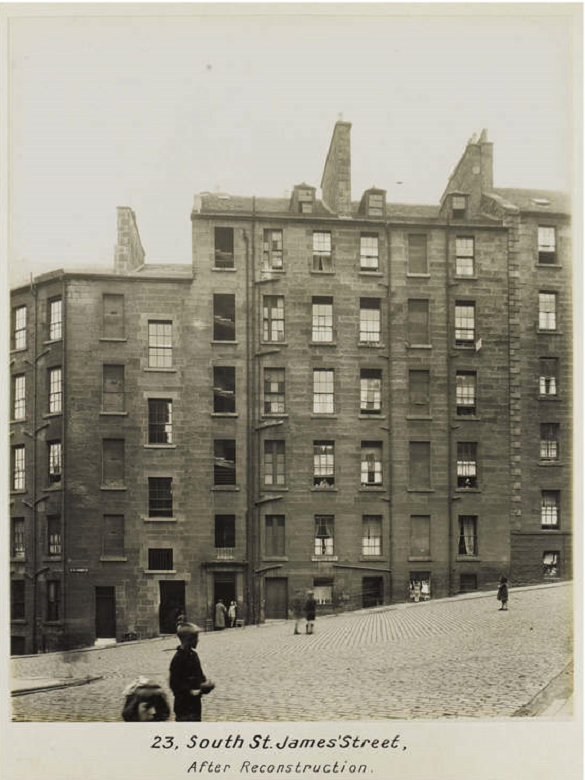 Although certain tenants disliked the peripheral locations of some 1919 Act estates, the housing was generally over-subscribed. A century later their generous accommodation, layouts, greenery and gardens remain very popular. This is reflected in the high level of private ownership under ‘right to buy’ legislation.

With this in mind, and in a period of housing crisis, the Act’s centenary has led many to look again at this important intervention in the housing market.

Websites such as Municipal Dreams celebrate the golden age of public housing and the architect and broadcaster George Clarke recently called for a new State investment in high quality low-carbon council housing for families, firmly echoing the spirit of the ‘homes fit for heroes’.

Steven works in the Planning, Consents & Advice Team within the Heritage Directorate. His team provides historic buildings advice, mainly to local authorities, for the Eastern half of Scotland. The workload includes high-profile projects involving alterations to listed buildings and development within conservation areas, designed landscapes and world heritage sites. Steven has recently published works on Edinburgh’s early council housing from the late nineteenth century to the second world war. View all posts by Steven Robb