Wasps: An Artistic Chapter in the Story of Historic Buildings

I’ve been working for Wasps for just over a year now. A charity which manages inspiring spaces and places, Wasps is home to Scotland’s largest creative community. As an organisation, we provide studio space to around 900 artists, 25 arts charities and 33 creative businesses at 19 historic locations across Scotland.

Over the past 42 years, Wasps has been breathing new life and purpose into historic buildings from Shetland to the Scottish Borders, including former schools, libraries and even Glasgow’s historic fish market.

These are the stories behind three of our studio projects– iconic buildings where some of Scotland’s best loved artists, designers and makers are now based. 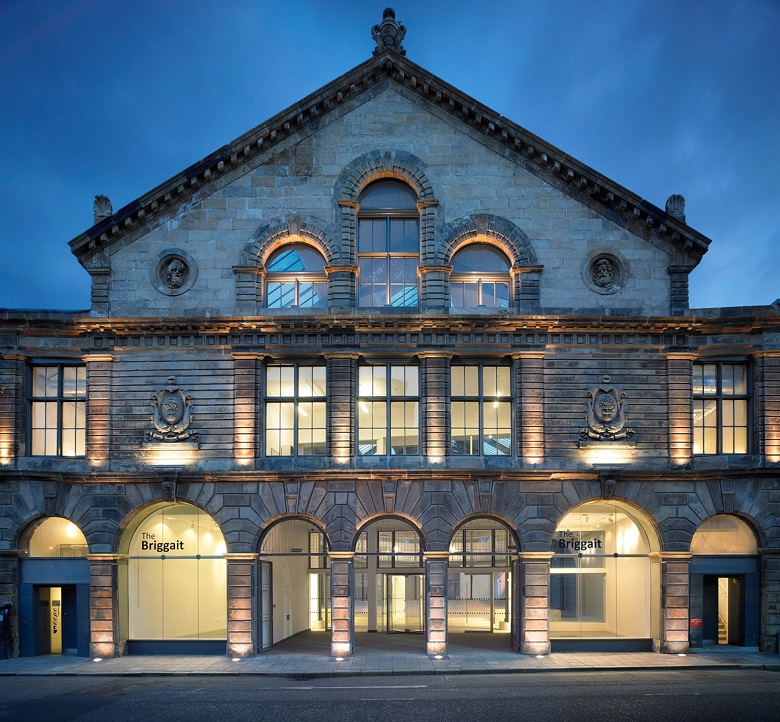 I remember visiting the Briggait for the first time during the Glasgow International Festival, Scotland’s largest festival for contemporary art. Originally serving as Glasgow’s fish market for over 100 years, the Briggait’s ‘1873 hall’ was filled with sculptures for the festival.

I was astounded by the grand architectural surroundings and then further amazed to find that the beautiful building also housed artists’ studios.

The story of the Briggait is fascinating, from housing Scotland’s oldest surviving collection of market halls to the artistically inspirational space of today.

The category ‘A’ listed fish market’s distinctive façade is one of Glasgow’s most enduring and endearing landmarks and has been since the 19th century. It was designed by architects Clarke and Bell, who were inspired by the famous ‘Les Halles’ markets in Paris. Opening in 1873, the Briggait  was the most modern and sanitary market complex in the UK at a cost of £7,000. 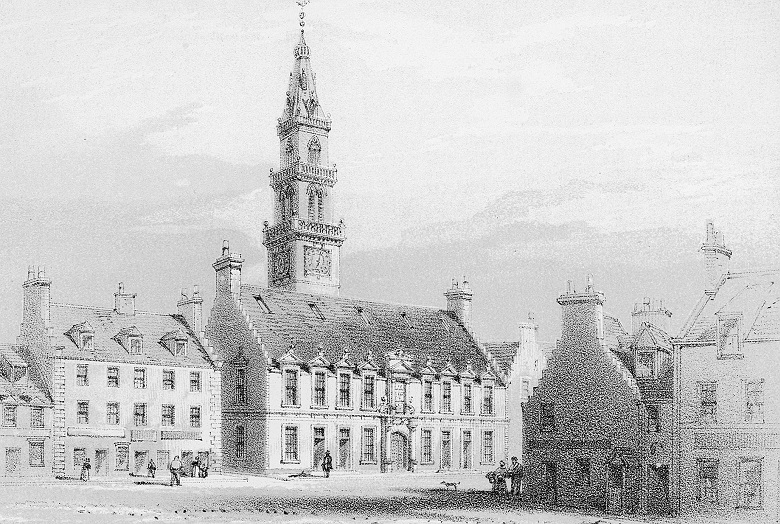 An 1848 sketch of Merchant’s House featured in “Views and Notices of Glasgow in Former Times” by Robert Stuart © Glasgow City Libraries. Licensor www.scran.ac.uk.

The building stands on the site of Glasgow’s medieval heart and the triangular lines of medieval lanes are still visible. The steeple of the Briggait dates back to the 1656 Merchant’s House, a trading centre and “almshouse” or hospital for city merchants. When it was demolished in 1817, only the Merchant’s Steeple was left and is now incorporated into the market hall structures.

The fish market continued until 1979, when the market moved to the outskirts of Glasgow. Apart from some temporary uses, this magnificent building lay empty for the best part of 20 years. It was in danger of demolition until Wasps redeveloped it for artists and events, completing the project in late 2009. 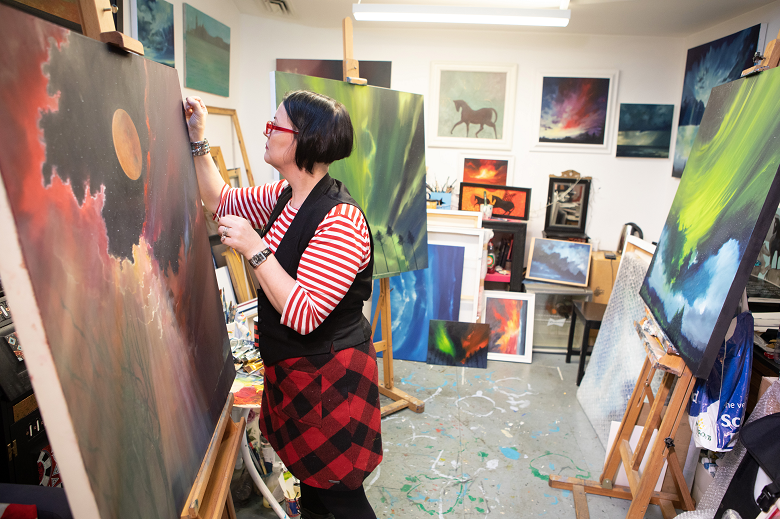 Maureen Rocksmoore is one of over 100 creatives based in the Wasps studios at the Briggait in Glasgow.

Today, the Briggait is full of life again, providing an exciting studio base for over 150 creative people and affordable office space for 25 cultural organisations and social enterprises. It’s also a popular venue for a number of events including exhibitions, markets and festivals.

My office is based in the Briggait, so I feel lucky to have the view of the hall that I first saw full of sculptures from sitting at my desk. Not only this, but I also now have my own studio in the Briggait! 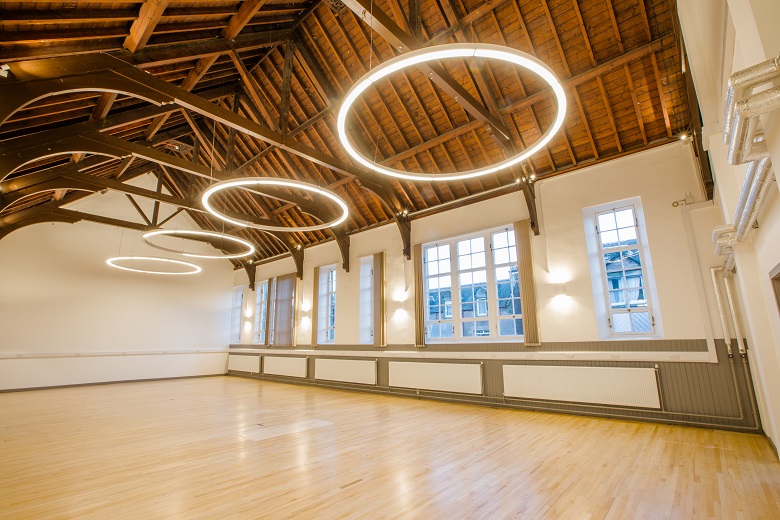 Inverness Creative Academy is one of Wasps’ newest developments, creating a place to unite and connect creatives based in the Highlands. The building, known as ‘Midmills’, holds a special place in many peoples’ hearts, having been the home of Inverness Royal Academy and latterly Inverness College.

We knew there was a huge demand for a creative hub in the Highlands and had been keen to find a site in Inverness for several years. We found the perfect place in the Midmills site.

The Inverness Royal Academy building was designed by the architectural practice Ross and Macbeth and built between 1893-5. This practice was responsible for many buildings in Inverness during the late 1800s. Architect Alexander Ross is probably best known for designing Inverness Cathedral in the 1860s. The foundry at Rose Street and Academy Street, and two other buildings that still exist on the Inverness Royal Academy were also by architects Ross and Macbeth. 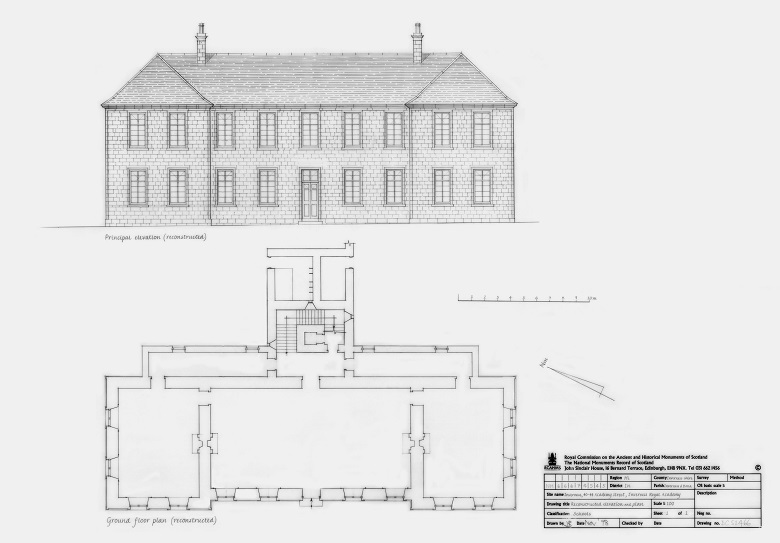 The first phase 1 of the Inverness Creative Academy project was completed in November 2018 as part of a partnership development between a private developer and Highland Council for the wider site.Alongside 32 studio spaces for artists and makers, the building also houses a community darkroom and a large exhibition and events space in the beautifully restored gym hall.

“Inverness badly needed this creative space, and it couldn’t be better placed here at the Midmills building. My early art college years were spent in this building…it’s great to see that it retains a lot of its original features and character.”

Wasps is  now fundraising for the second phase of development . We’re aiming to  restore the original 1895 academy building and the suite of Managing Change in the Historic Environment guidance from Historic Environment Scotland (HES) will be an essential point of reference. This is one of Inverness’ finest listed buildings and the project will see the grand assembly hall returned to an inspiring public space. 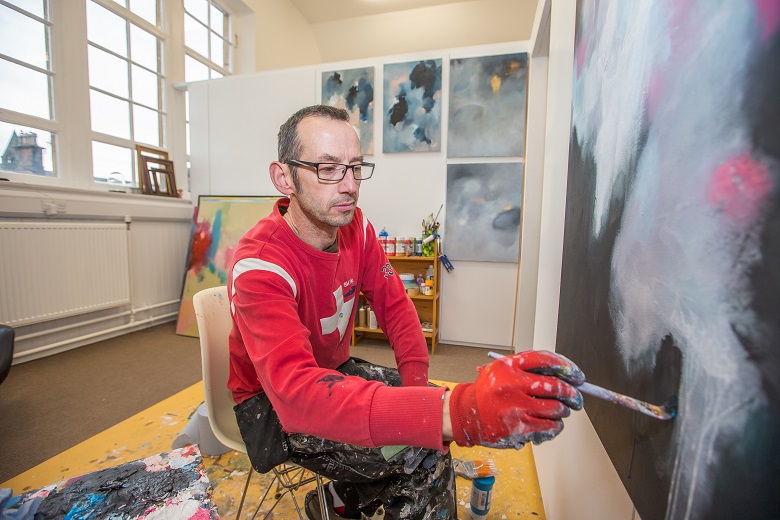 With one phase complete and one phase still to go, it’s already clear that these renovations to the building will have a significant impact to both the creative industries of the Highlands and to Inverness’ heritage. 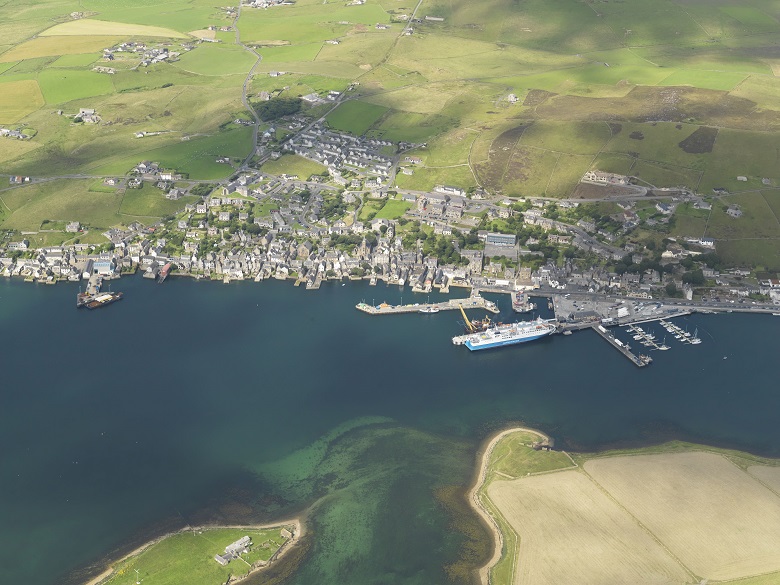 Wasps listens to the needs of creative people all over Scotland. The creation of five studio spaces and a workshop space for Soulisquoy Printmakers at Stromness Studios means that the local artist community in Orkney now have their own place, and don’t have to rely on services in mainland Scotland.

The building on Hellihole Road was opened as Orkney’s first public library. The library was built in 1905, thanks to money left to the town by Marjory Skea, a wealthy local landowner. She was also known as Marjory Corrigall and an inscription on the western gable of the building records both names. 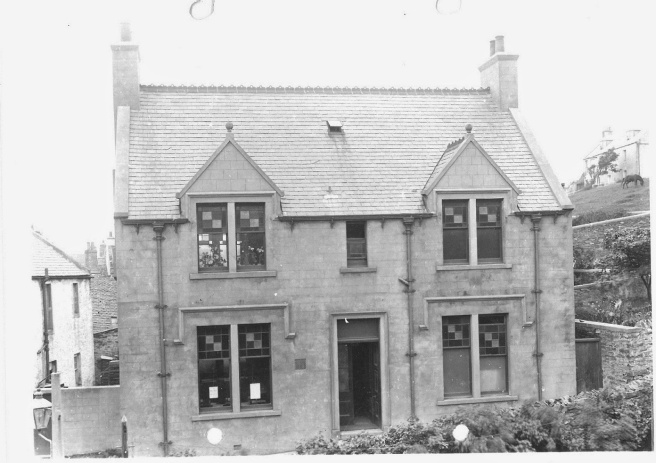 After more than a century of use, originally kept up by subscriptions of seven shillings a year, Stromness Library closed in 2015. The category C listed building belongs to Orkney Islands Council as a Common Good asset – intended to be cared for on behalf of the community.

Because the Council knew that the building was going to be empty, they were in a good position to start trying to find a solution before it was urgent. They ran a community consultation with input from Council departments, community groups, and local arts organisations and identified demand for a creative use for the building.

Wasps secured the building on a 125 year lease and formally opened it as studio space in October 2016. It only needed some minor repairs to bring it back into use, including works on the roof and replacing the guttering, subdivision into studios and redecoration. 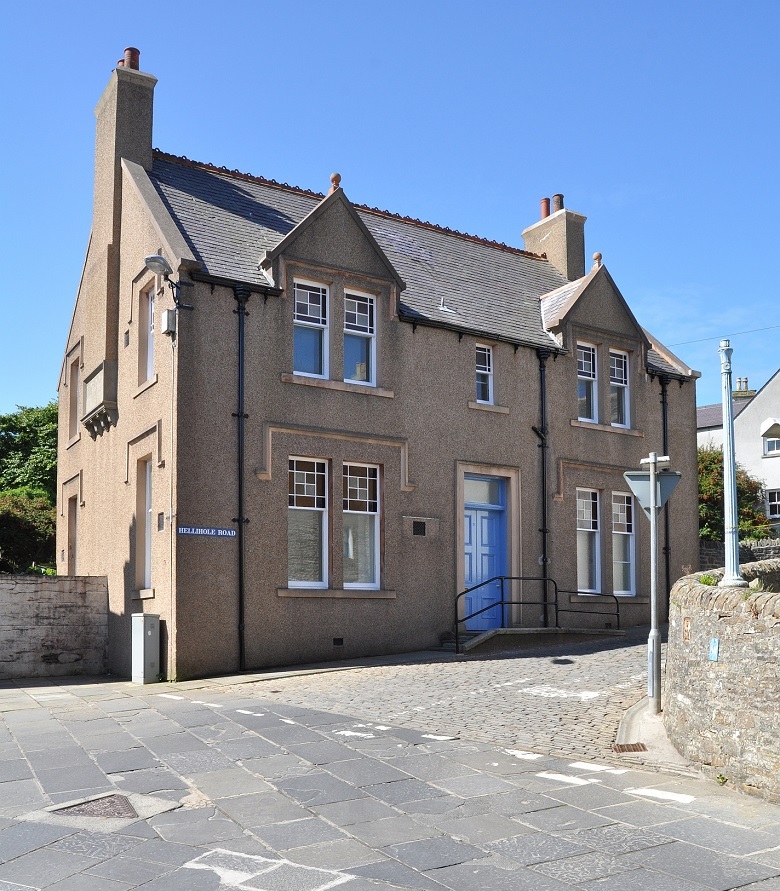 We’re delighted that the Stromness Studios project has secured the long term use and enabled the survival of a much loved community building.

“I went to the secondary school in Stromness, it has been lovely to return… I have a new appreciation of the heritage of Stromness, and often think about the history and the secrets that the cobbled streets hold. The Wasps studios used to be the Library, and my space used to be the reference room, and in the silence there is a quiet knowing. I love hearing people recall their memories of the place.” 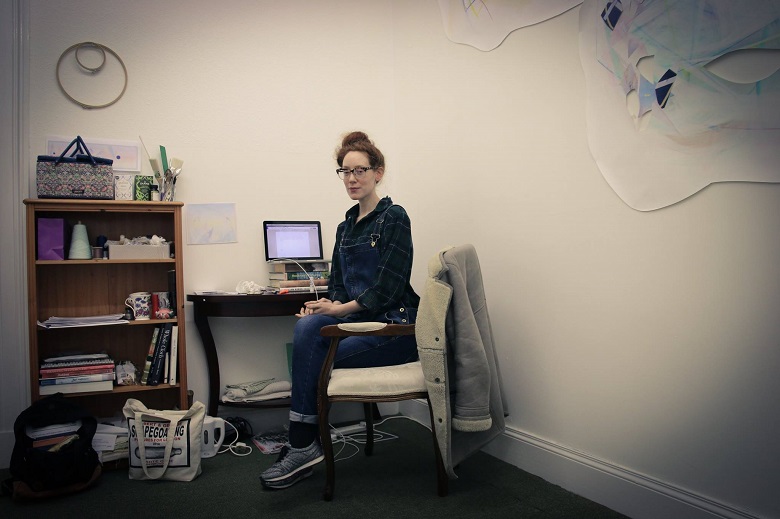 The next step in the Wasps story

For me, it’s been so exciting to get to know all of these unique buildings, hear their stories from before Wasps, and be lucky enough to be part of their story today. As an artist myself, with a great interest in architecture and heritage, working in these beautiful buildings, with the fantastic creatives who work within them, is brilliant.

The guidance from HES explains how Wasps and other charities, developers and decision makers in the planning system can see the reuse and adaptation of listed buildings for community benefit.

To find out more about Wasps and our other studio sites, visit www.waspsstudios.org.uk

Read the HES Planning Performance Report to find out more about the work of the HES Heritage Directorate and Historic Environment Scotland’s role in the planning system.

Tara Marshall-Tierney is an Admin and Marketing Assistant with Wasps Studios, based in the Briggait in Glasgow. She is also an artist specializing in performance, collaboration and installation.