On National Sporting Heritage Day, we take a look at the tradition of Real Tennis and one of world’s oldest tennis courts.

Playing sport, or watching it, holds us in the here and now. But sport also shows us the past, tradition and history, things that stay the same and things that change. Playing Real Tennis (‘caitch’ in Scots) on the sixteenth-century court at Falkland Palace certainly does that.

Built on the Falkland Palace estate in Fife, the Falkland Real Tennis court is unique. Of the forty-eight active courts in the world, it’s the second oldest, and the oldest in the UK. It is also the only one in Scotland, and the only outdoor court.

The court was built for James V between 1539 and 1541, and played on by him, his son, James VI, and by Mary, Queen of Scots. James V spent nine months in France and presumably played tennis there, where most palaces and chateaux had their own court. 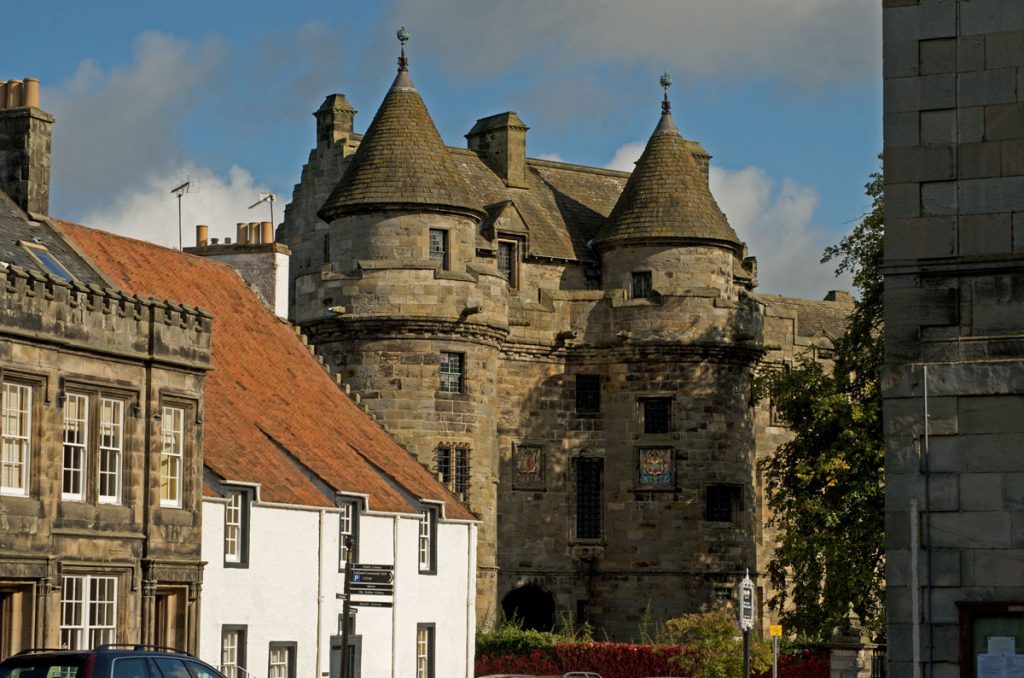 The transformation of Falkland Palace under James V was illustrative of the close links between the Scottish and French Courts at this time.

It’s not surprising that Falkland Palace has a French influence. Inspired by his stay on the continent, James V transformed his favoured Fife retreat on his return. He even brought French master masons to work alongside his Scottish craftsmen to build the extended Renaissance residence.

The creation of the roofless tennis court lends more evidence to the royal ties between two Scottish and French royal courts, though in France, tennis wasn’t just played by the nobility. By 1615, there were over 200 courts in Paris. In comparison, by around 1600, there were fourteen courts in London, and perhaps ten in Scotland. 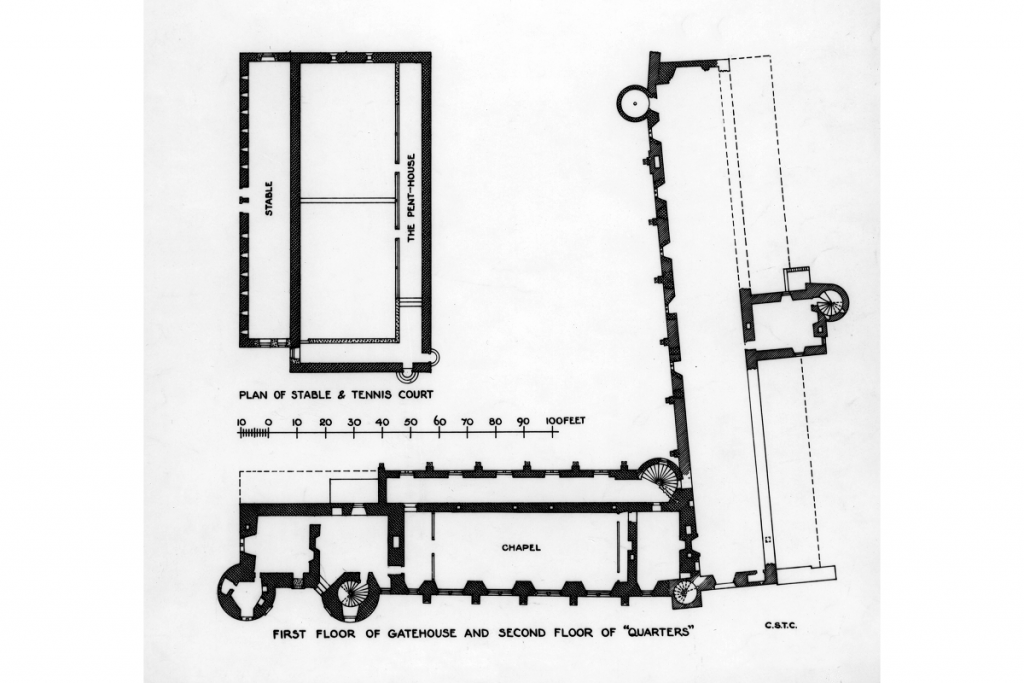 This 1925 plan of the stable and tennis court at Falkland Palace was the result of an early survey by Royal Commission on the Ancient and Historical Monuments of Scotland (RCAHMS). Today, Historic Environment Scotland (HES) continues its work to record all aspects of the historic environment in Scotland.

By the mid-1600s, the game was no longer fashionable in Scotland. Where space was tight and land valuable, the courts began to disappear. For example, two Edinburgh courts became a fleshmarket, one became a weavers’ shed.

When James VI became James I of England in 1603, the Fife residence for royal Stuarts fell out of favour and he spent most of his time in England. As a result, Falkland town did not develop as a major centre, so the space where the tennis court stands was not needed (though its paved floor was removed for use elsewhere). Like much of the town itself, it was preserved, though not used for tennis. 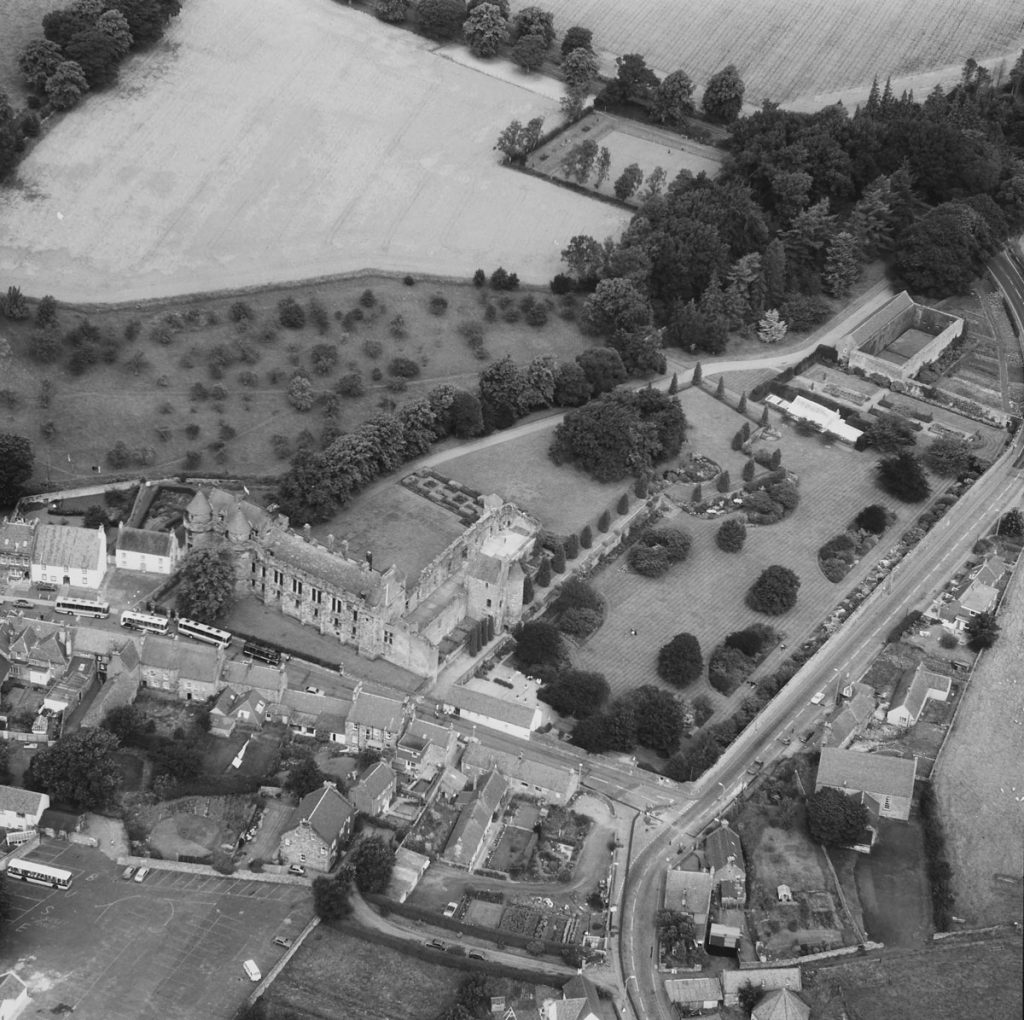 An aerial view of the Palace, gardens and tennis court (the rectangular building in the top right of the image) in 1980 from the HES Archives.

Although it fell into disrepair after 1660, both Falkland Palace and the tennis court were restored and brought back into use by the Marquess of Bute in the 1890s.

Today, it is cared for by the National Trust for Scotland (NTS).

In the past, there must have been many games played where two teams hit a ball over a net or cord. In France, a Real Tennis court is a jeu de paume (‘game of palm of the hand’), a reminder of the early racquet-free origins of the sport.

Throughout early sixteenth century Europe, these games became unified and codified, with the first rule book written in Italy in 1555. By then, the shape of the court had been more or less agreed, but with two versions: jeu dedans, the form of all indoor courts in use today, and jeu carré, the form of the Falkland court (another of its unique features). 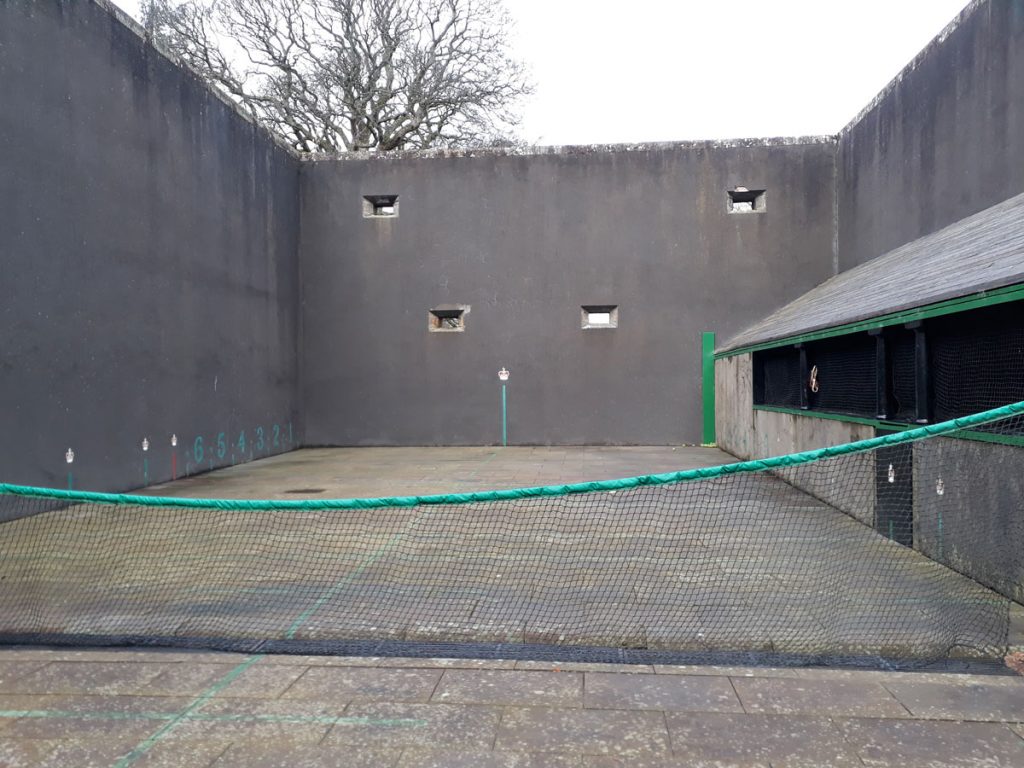 The jeu carré court is slightly smaller and has a few other differences, such as holes, called lunes, in an end wall and an upright wooden plank, the ais. The additions both offer another way to win a point by hitting the ball through or against them.

It was, and is, expensive to build and maintain the courts. Real Tennis became a sport played mostly by the wealthy. In the nineteenth century, there were several attempts to create a similar, but more affordable, game and Lawn Tennis began. Between 1870 and 1890, the first set of Lawn Tennis rules was printed, Wimbledon opened its first court and the first US Open was held. 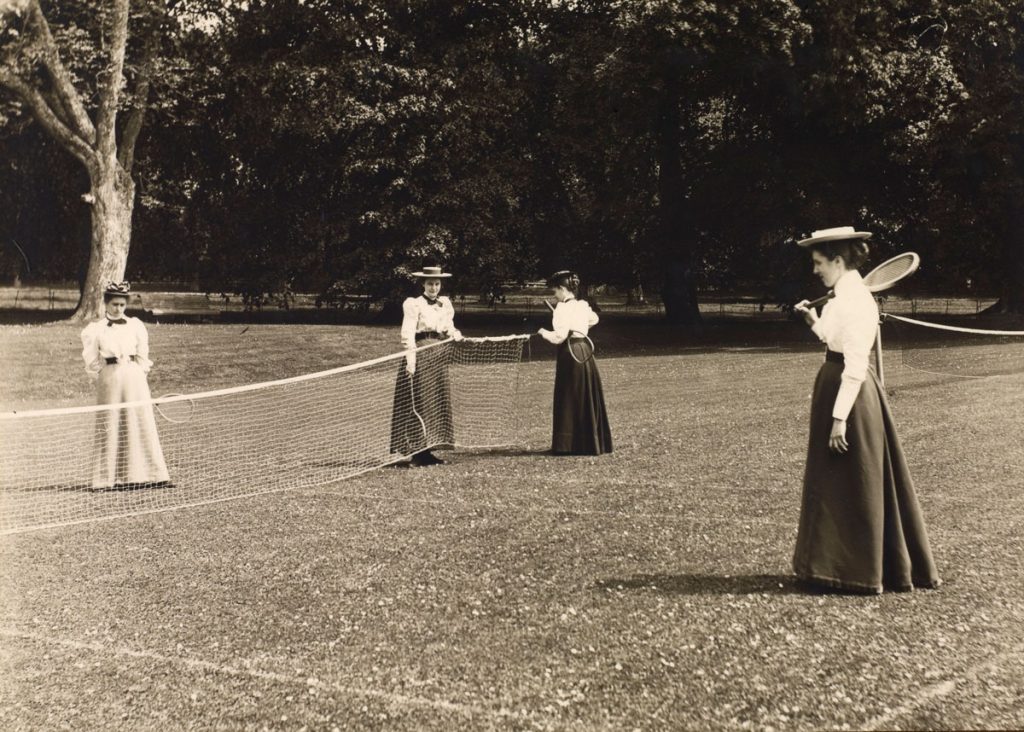 This photograph from the HES Archives shows the popularity of Lawn Tennis as a pastime on the grounds of Lennoxlove House in East Lothian at the turn of the twentieth century.

Until this time, Real Tennis was simply ‘tennis’. Lawn Tennis was the name of the new game, but as it became more popular, it became just ‘tennis’. ‘Real’ Tennis took on its extra name to distinguish it from its modern offspring.

As with Lawn Tennis, the players are on different sides of a net, and hit a ball over it. A lot of the scoring will be familiar to fans of modern tennis, using ‘love-15-30-40’.

One difference is the use of the walls, making the sport more similar to the game of squash. Another is that you may hear a score like ‘Forty fifteen, chase six yards’.

There’s a fuller explanation of chases on the Falkland Place Royal Tennis Club website or watch the video below, but put simply (!), if the ball bounces twice on your side of the court, you haven’t lost the point (yet). It means that a chase has been laid at the point of the second bounce. You note where it fell, using the lines on the court.

When there are two chases (or one chase if the score is at game point), servers and receivers change ends (because serving is always from the same end of the court).

Then you try to get a better chase (that is, nearer the end wall) than your opponent did.

It usually takes months to learn even if you’re a regular player! 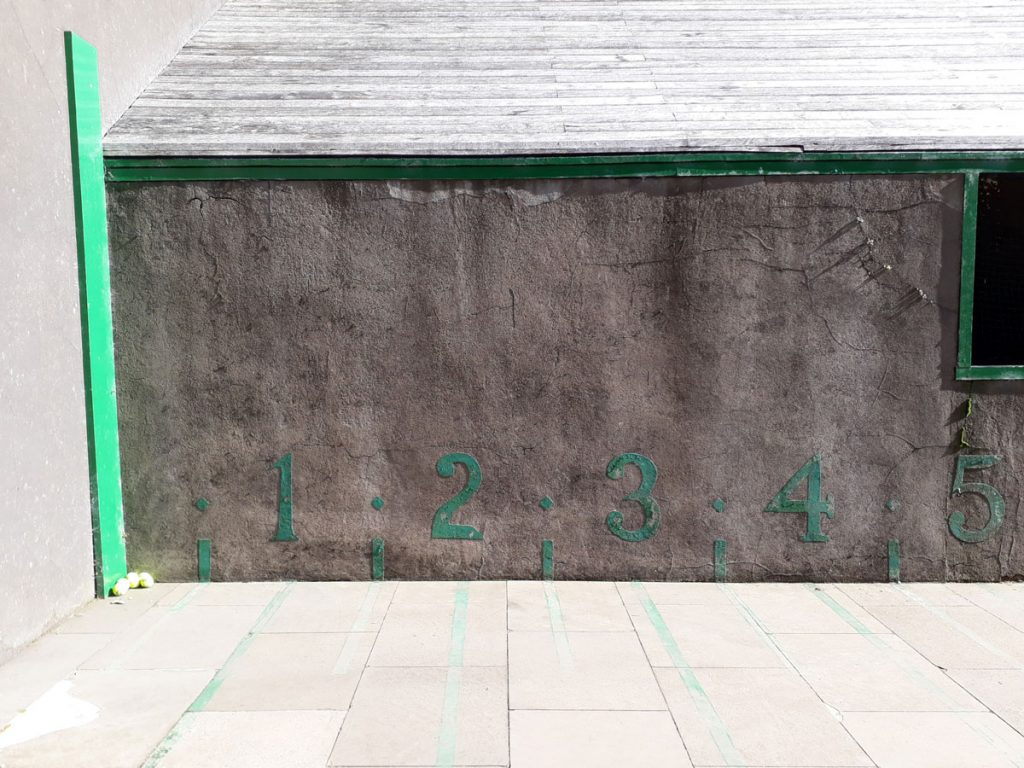 Along the walls of the court are yard markings to the ‘chases’. Image © Phil Hind.

Falkland Palace Royal Tennis Club (FPRTC) has existed since 1975, to encourage and develop the use of the court as James V used it, to keep it alive. We are very thankful to him, to the Marquess of Bute and to the NTS for having the opportunity to play on the court.

For further information, especially if you want to try the game, visit the FPRTC website.

About the author
Phil is Chair of Falkland Place Royal Tennis Club (FPRTC). With the FPRTC committee, he works with HES, NTS and Fife Council to ensure the continuing use of the Falkland court, with its unique link to the past.