When art and engineering meet

Over the decades, Scotland’s industrial landscape has changed but you can still find pockets where traditional methods, tools, skill and craftsmanship meet modern technology and techniques.

These industrial spaces have always held a fascination for artist Kate Steenhauer. Born and raised in The Netherlands, Steenhauer has a background in engineering. She came to Scotland over a decade ago and since then she has developed as a visual artist.

Over the past few years, Steenhauer has built a record of life behind Scottish heritage, industries and landmarks. This comprehensive body of work is the focus of the exhibition at Duff House.

Darg and Drams showcases a story of life at some of Scotland’s most iconic industries and landmarks. Steenhauer has had behind-the-scene access at Speyside Cooperage, stood on helicopters in gigantic hangars at Aberdeen Heliport, captured life at the shipyards of Aberdeen, Knockando Wool Mill and a livestock auction in Thainstone Mart. Above all, the exhibition focusses on the people living and working in Scotland, absorbed in work and play, and at one with their environment.

In this blog, we take a look at just three of the industrial environments that have inspired Steenhauer’s work. 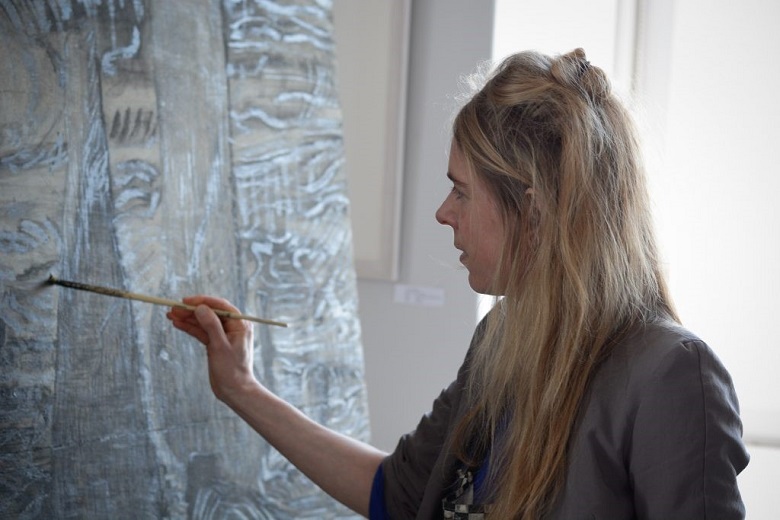 Kate’s studio is next to the harbour in Aberdeen. She loves to sketch the people at work there, surrounded by cranes swinging, trucks coming and going, cherry pickers and gulls. 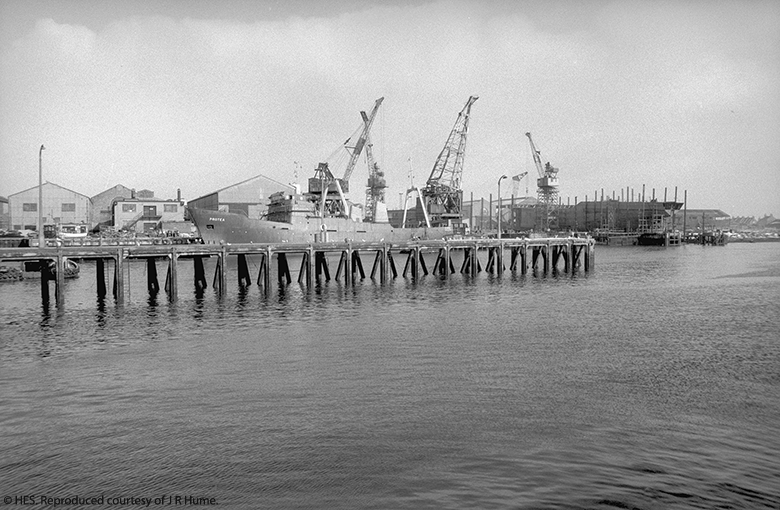 Established in 1136 by King David I, Aberdeen Harbour is thought to be the oldest existing business in Britain. It has a history that spans almost 900 years and has seen many industries come and go over the centuries. Fishing, shipbuilding, textiles and global transportation of stone from the city’s famous quarries have all relied on the harbour.

Over the years it has experienced attacks by Norse invaders, pirates and the Luftwaffe. 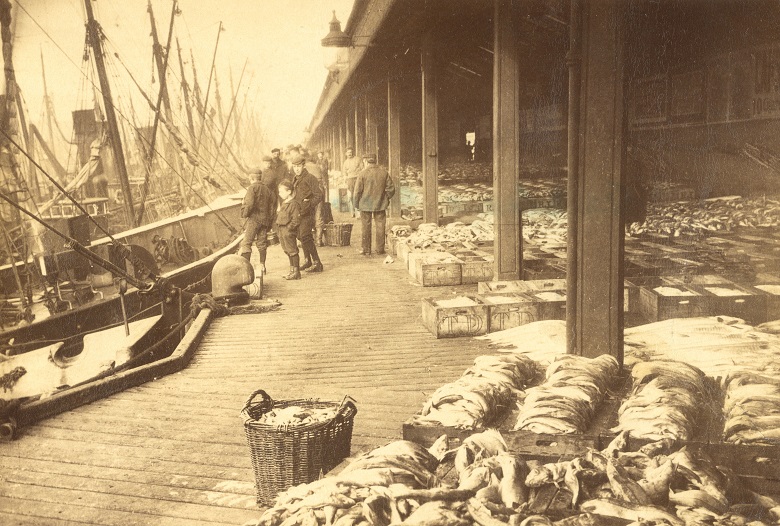 View of the fish market at Aberdeen Harbour in 1904.

While many ports have suffered decline, Aberdeen remains busy because of the oil trade. It’s 55 years since the first oil company began operating at Aberdeen Harbour. Since then, more than 195,000 vessels associated with the offshore oil and gas sector have passed through the harbour. Over the decades, the peaks and troughs in the oil price has influenced the fortunes of the local economy.

This local landmark was at the heart of Kate’s inspiration for her work. 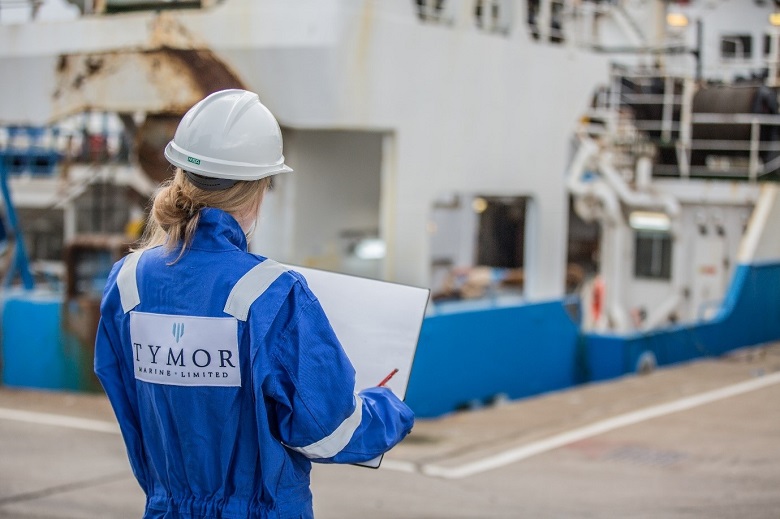 Did you know that international laws require any whisky bearing the label “Scotch” to be distilled and matured in Scotland for a minimum of three years and one day in oak casks? That means we need a lot of oak barrels in Scotland!

Back in 2016, Kate spent five months soaking up sights and smells of the whisky industry in an effort to learn as much as she could about the methods behind Scotland’s national drink.

One of the places she immersed herself in was Speyside Cooperage – a working cooperage which produces and repairs around 150,000 oak casks every year for the local and international whisky industry.

At Speyside Cooperage, the artist found the mix of old and new techniques fascinating. Traditional tools and hand-crafted methods are used by the coopers to create impressive barrels. 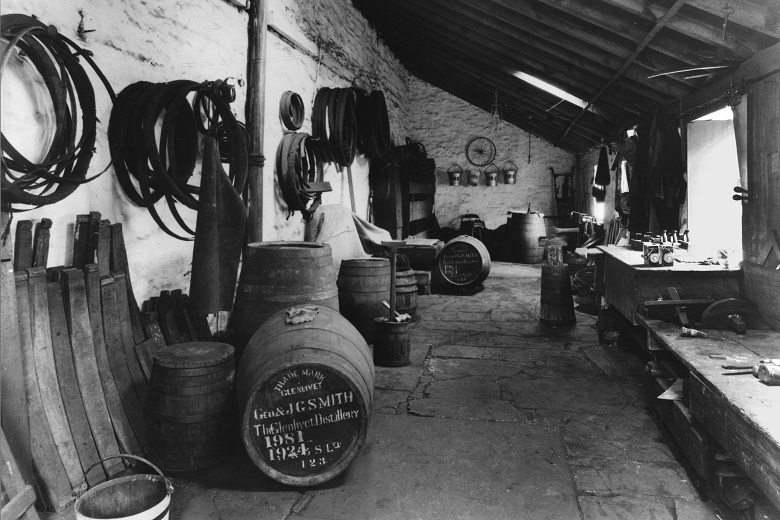 View of a traditional cooperage at the Glenlivet Distillery.

Speaking about her experience at the cooperage, Steenhauer said:

“My mouth dropped when I walked into the environment. I didn’t know where to look. There is so much to absorb.

“When they fire the casks there is a lot of steam. I really wanted to create that great atmosphere and have figures emerging from the steam.” 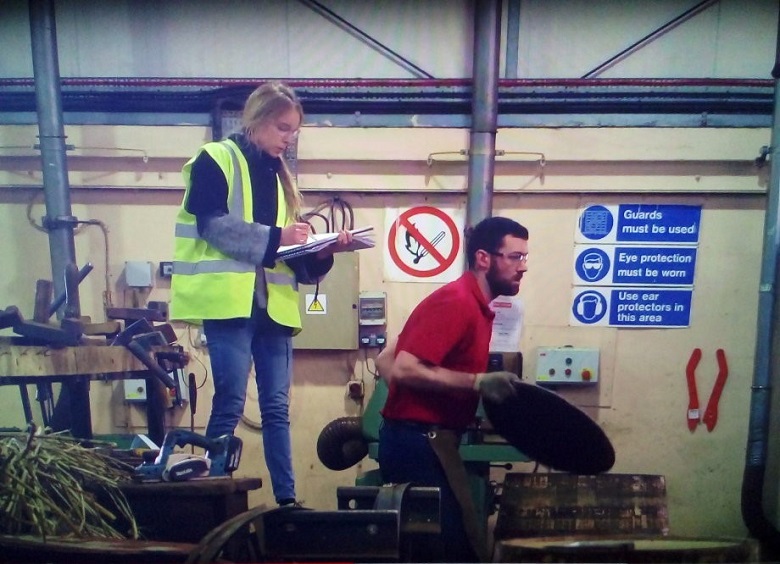 Not far away from Speyside Cooperage is Knockando Woolmill. For over 230 years this mill has occupied the same site in the Spey Valley. The first mention of the mill can be found in parish records dating to 1784.

Local farmers would bring their fleeces to the mill to be woven into fabric or spun into yarn. When the Industrial Revolution swept through Europe, the mill added new mechanised equipment to keep pace with technology.

Unlike the large industrial mills of the Scottish Borders, the Knockando Woolmill grew from a cottage industry. When they could afford to, the Woolmill tenant would invest in second-hand machinery and extend the mill buildings to accommodate it. The result is a curious ramshackle collection of buildings with an intriguing mix of historic machinery.

Successive tenants kept the old mill going, weaving on Victorian looms. In 1995 the historic importance of the mill and its machinery were recognised and the building was awarded category A listed status.

However, by 2000 the mill was struggling. It needed help to keep up with repairs and maintain the old machinery. The Knockando Woolmill Trust was formed and over a decade they worked tirelessly to raise over £3.5million to repair and restore the buildings and machinery. Not only have they managed to conserve the site for future generations, they are working to train a new generation of craftsmen so that manufacturing can continue well into the future. The mill has also been opened to the public for education and enjoyment.

John Mulligan from Knockando Woolmill explains how the mill has become an inspiration for artists like Steenhauer and those working at the mill every day.

In 2016, Steenhauer collaborated with Knockando Woolmill to produce a series of prints capturing life at the historic district mill in Speyside.

Darg means days’ work and dram is the pouring of alcohol so this title fits in perfectly with Kate’s theme for her exhibition. Her work touches on classical subjects, such as harbours, a cooperage and a wool mill. The main focus of her work is on the people living and working in Scotland, absorbing in work and play and at one with their environment.

If reading about Kate’s exhibition has left you wanting to see more, take a look on her website.