Łukasz Banaszek, our Remote Sensing Mapping Manager, explains how an international project with participants from Poland, Sudan and Scotland has helped map the lost Sudanese city of Soba.

You might have heard about some amazing discoveries on the Isle of Arran last year? I was part of the team who used laser technology to map the island in a whole new way, revealing its secret history.

It’s exciting to be at the forefront of technical innovations – using them to uncover the hidden past beneath our feet. At Historic Environment Scotland we also think it’s important to share what we’ve learned with colleagues across the world to help understand and protect other globally important sites. It’s also a chance for us to develop our skills. That’s why, at the end of 2019, I headed to central Sudan.

The area I visited in Sudan has an incredibly rich history. In medieval times the area was known as Nubia, a region divided today between Sudan and southern Egypt.

The focus of our expedition was the city of Soba. Soba was the royal seat and capital of the Nubian Kingdom of Alwa (Alodia). It flourished for centuries on the banks of the Nile, but eventually declined due to political, economic and environmental reasons.

Before its fall, Soba was described by Arab travellers as multi-ethnic metropolis. It boasted blooming gardens, numerous churches and monasteries, and rich seats of secular and ecclesial power. Sadly, in the early 1500s the city was destroyed and then abandoned. Soba never rose again from ashes and in the 19th century its ruins were heavily scavenged for redbrick during the construction of Khartoum, the new capital of then Turkish Sudan. Two centuries later, encroaching suburbia of modern Khartoum, extensive cultivation along the Nile valley and large-scale infrastructural projects further threaten the remains of Soba.

This once powerful royal seat spans an estimated area of 275 hectares – slightly larger than the area occupied by Holyrood Park in Edinburgh (260 hectares). To date, it has been poorly understood, with only 1% of the site subject to detailed archaeological investigations. This new project, undertaken by Polish, Sudanese and Scottish partners, aims to improve understanding of the site.  Through archaeological, geophysical, and anthropological surveys and research we hope to better protect the site for the future.

Bringing a team together

To understand the archaeology of a site like medieval Soba, you need to bring a lot of different expertise to the project. The four key teams in this project were:

I teamed up with a group of Sudanese students and graduates to help develop their skills in using high-accuracy Global Navigation Satellite System (GNSS) devices and archaeological mapping. I also shared my expertise in spatial data management. 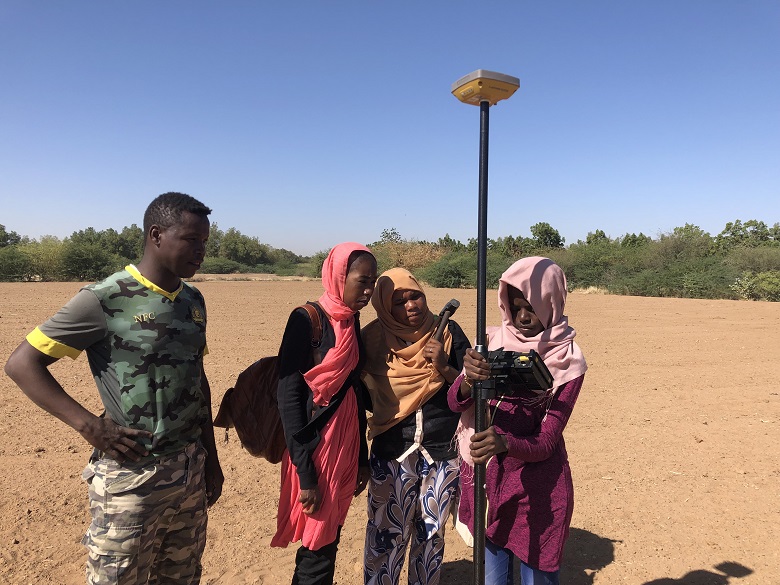 GNSS mapping works by placing a receiver in a location you want to map, then at least four satellites are called upon to calculate simultaneous measurements. When looking for accurate readings, considerations include how may satellites are in the visible parts of the sky, changes in the Earth’s atmosphere, or whether you’re in a deep valley. The location services on your smartphone work in a similar way, but are less powerful. Using this technology, we could precisely map surviving archaeological features.

I was also responsible for ensuring the collected spatial data was correctly integrated in a geographic information systems (GIS) environment. My colleague Andreas Buchholz wrote a recent blog on how we use GIS technology at Historic Environment Scotland.

GIS is a framework for gathering, managing, and analyzing data. It incorporates spatial data and organises it into visuals. Therefore, we can build up a picture and see patterns.  This helped us to interpret past land use. Finally, we used this spatial data to plot unplanned agricultural expansion within the protected site and prevent further land conversion.

While our team collected spatial data, the geophysical team produced a map of magnetic anomalies of the site. These anomalies are often the result of the presence of ancient walls and buildings. This helps us to understand the layout of streets, buildings, and districts of Soba. 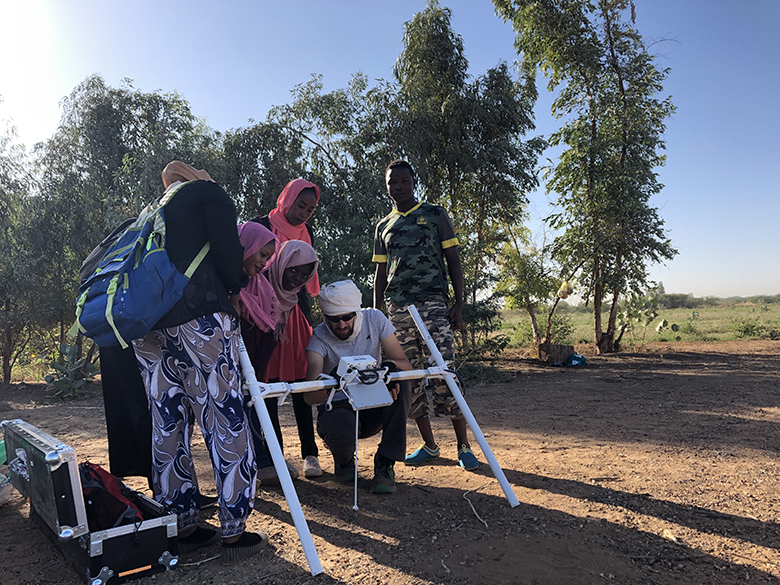 Robert Ryndziewicz from the Institute of Archaeology and Ethnology Polish Academy of Sciences explains the principles of a magnetic survey. Photo: Ł. Banaszek

The geophysical survey helped us to pinpoint particular sites of interest. After that, archaeologists carried out targeted excavations on these areas. Their excavations helped us interpret the anomalies and features from the magnetic survey. This archaeological information will help us to make educated guesses about the results of the magnetic surveys from the rest of the site. 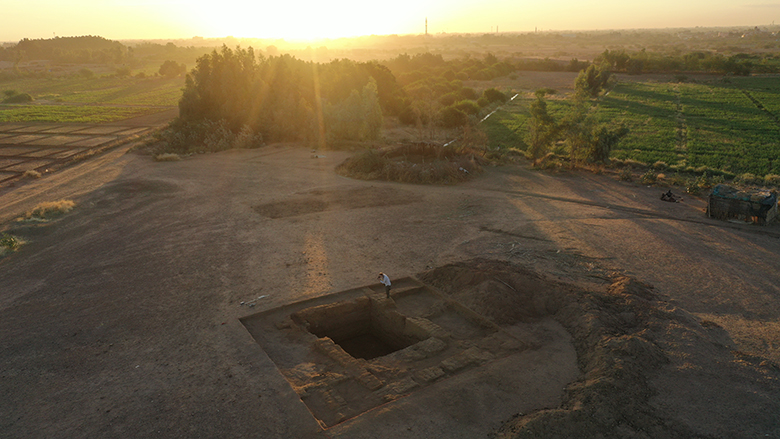 Excavations in the morning light. It’s possible to see the encroaching cultivation in the middle foreground. The suburbs of Khartoum are on the horizon. Photo: M. Drzewiecki

While archaeologists investigated the ruins of Soba, cultural anthropologists interviewed local residents to discuss the relations between the past and the present. For decades, the inhabitants of the area have been unearthing remains of the ancient kingdom in their every-day practice. For instance, cultivating fields, constructing houses, and herding flocks can all lead to encounters with the medieval city. This has triggered complex response to the site. While some people had deliberately neglected the remains and let them decay further, others had spiritual reactions. Hopefully, understanding these links could help to construct a new relation between residents and the archaeological site. In turn, this might reduce damage to archaeology and improve a sense of belongingness. 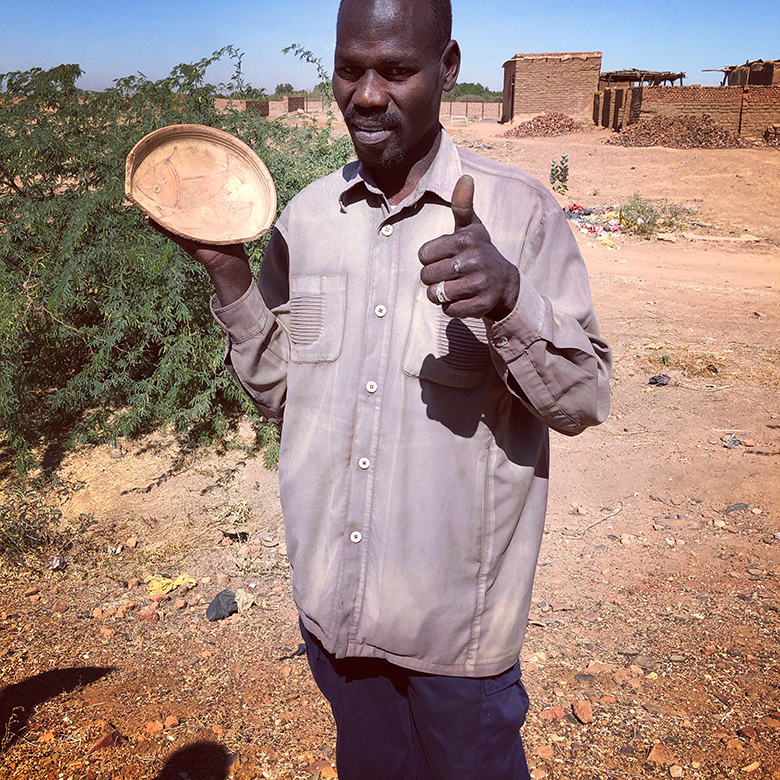 Scotland has a reputation for its warm and friendly people and its passion for science, technology and innovation. Hopefully this collaborative project in Sudan has helped to confirm our position here at HES as a “good global citizen”. It has certainly helped to build our international connections. In addition, these networks are increasingly important in the face of global threats, such as climate change. Above all, sharing our expertise is crucial to protecting and celebrating our shared global heritage.

Łukasz Banaszek works in Survey and Recording team. He processes, analyses and interprets remote sensing data to improve understanding of the Past. View all posts by Łukasz Banaszek