How to Capture a Castle

Join Historic Environment Scotland photographer Matt Cartney on a quest to capture Kilchurn Castle, on the shores of Loch Awe. Remember to pack your waterproofs, wellies – and a chicken sandwich.

Mentally ticking off the inevitably gargantuan kit list of a photographer, roughly in order of importance, is a useful exercise that I often engage in on the long car journeys to Historic Environment Scotland attractions.

It helps to pass the time and reassures me that I haven’t forgotten anything. Reassuring that is, except on the numerous occasions I’ve found myself thumping the steering wheel and exclaiming “Aaargh! … Lord Love a Duck! (or words to that effect) … I’ve forgotten to bring my neutral density filter/tele-convertor/coronation chicken sandwich.” 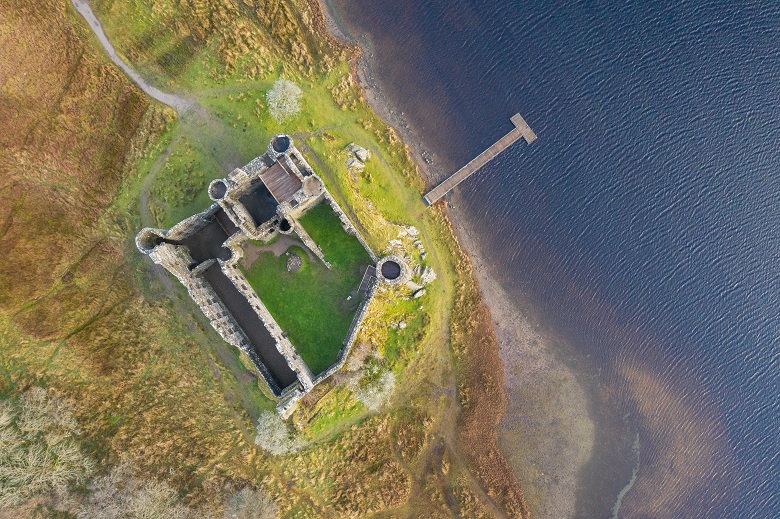 On this particular winter’s day I was heading for Kilchurn Castle, which forms part of one of the most spectacular historic landscapes in Scotland.

The castle sits on a windswept spit of land jutting out into the cold, dark waters of Loch Awe. Although a partial ruin, the walls still stand, black and imposing. They beat back the erosive effect of the wind and rain, seemingly by sheer force of character.

Above it tower the square shoulders and pyramidal peaks of Ben Cruachan and Beinn Eunaich. In winter, they are often capped with snow and lit by the yellow light of a low winter sun, which makes their bare, heather and boulder strewn flanks glow auburn red. A scene uniquely Scottish and wonderful to behold. 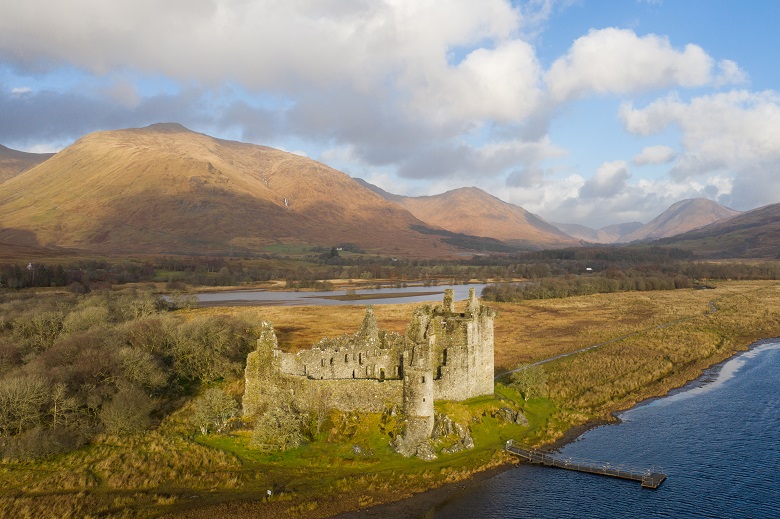 So, it was with a certain amount of anticipation that I had monitored the weather forecast in the preceding days…

The most important preparations had been made. The landowner had given permission for me to launch my drone, a flight plan and risk assessment had been drawn up and signed off. The necessary airspace and NOTAM (Notice to Airmen) checks had been made. Batteries had been charged and the pool car booked. 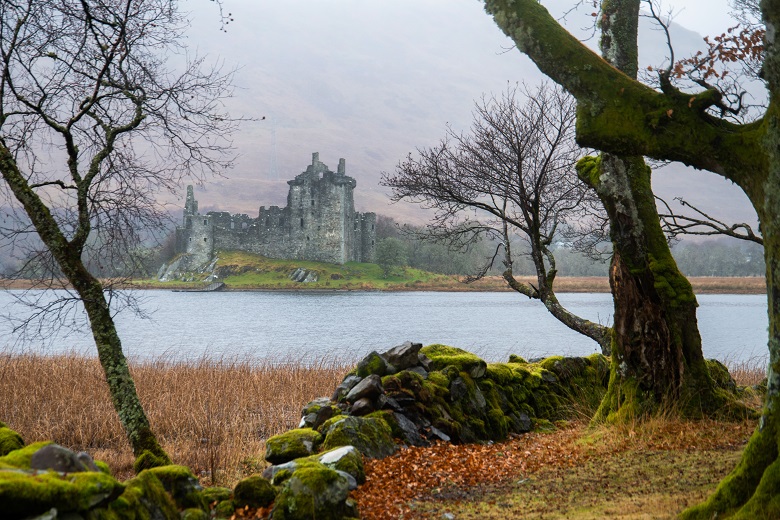 On Monday I’d been brim full of optimism – “sunshine and low winds on Thursday” said the Met Office. By Tuesday I was gnashing my teeth and shaking my fist at the sky. The forecast had changed to heavy rain, dark cloud and high winds. If the weather had been any worse they would have given it a name.

Then on Wednesday things improved. The barometer must have risen at the Met Office, because right in the middle of Thursday, they were predicting a weather window. One or two hours of sunshine and light winds sandwiched between two terrifying apocalyptic maelstroms. Typical Scottish weather, in other words.

The trip was on. The car was filled with photographic equipment and sandwiches and I set off. It was gamble, but it so often is. A long shot on a weather window, a long drive and a longer wait for a momentary glimpse of sunshine.

But it is so often on those days, when the light streams through a broken curtain of cloud for perhaps only a few seconds, that you get your best shots. The most dramatic moments captured on the dreichest of days. 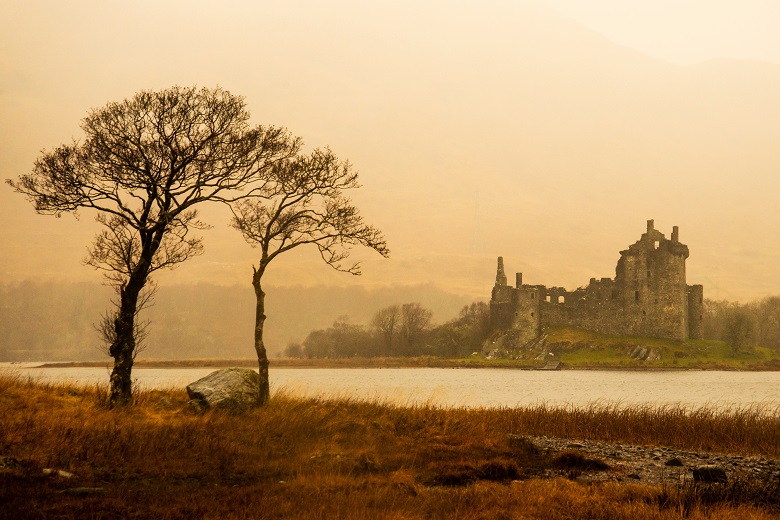 And today was pretty dreich. A fine misting drizzle blurred the spectacular view through the windscreen as I disconsolately chewed my coronation chicken sandwich in the lay-by across from the castle.

There would be no flying in this rain. Drones aren’t waterproof and have a tendency to plummet from the sky if they get wet, so patience was the name of the game. I wasn’t too worried, however. The weather window wasn’t due for a couple of hours yet.

Pulling on waterproofs and wellies, I grabbed my camera from the boot and went to get some conventional photography of the castle in its wild, wet and thunderous setting.

An hour and a half later I’d fallen off a mossy rock, sunk knee deep into a bog and taken some passably dramatic photographs of a grim and gloomy castle. 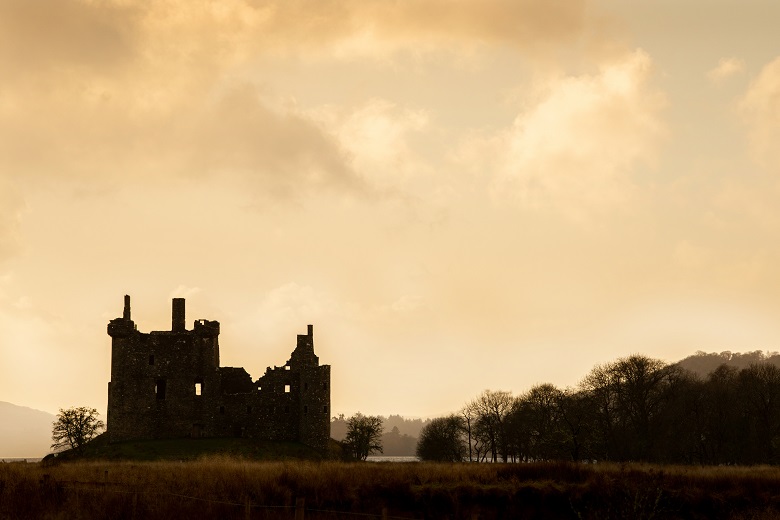 The rain had eventually petered out and the clouds had begun to lighten and pull apart. At the far end of the loch I could even see a tiny rag of blue in the grey blanket.

Had the Met Office been right? Was the sun about to burst forth with golden rays; casting the castle and hills in wintry ochre and cresting the wavelets of the loch in shining silver?

I could only wait and see. Hurrying back to the car I dumped my camera and unpacked the drone.

We have lift off!

Twenty minutes later the launchpad was out, the drone assembled, final checks were made and I was ready for take-off. And at that moment, Scotland happened. 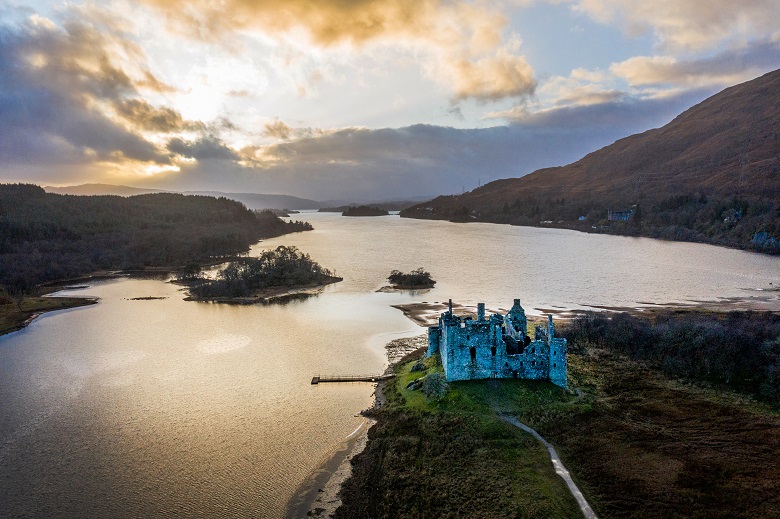 The sun, low in the sky in the South West, broke through the clouds at the far end of the loch. Loch Awe is 25 miles long, dotted with islands and surrounded by looming mountains.

Through the cold, grey gloom of the winter’s day the sun washed this exquisite Celtic landscape in watery gold. Illuminating the black islands in the distance and surrounding them with quicksilver. 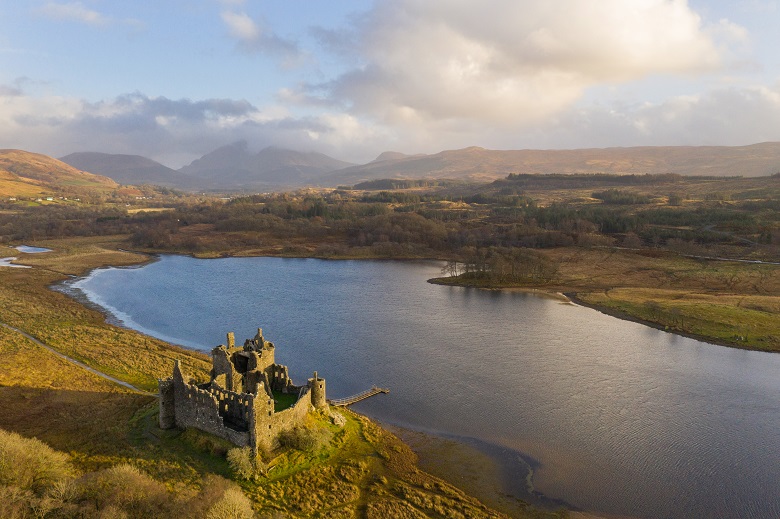 At last, the light hit the walls of the castle, picking them out from the background of the surrounding hills and throwing them into stark relief.

“Chocks Away!” I shouted to an empty landscape, and up shot the drone into the air. The patience, the planning, the gamble on a weather window and the cold, wet feet had paid off. Paid off handsomely.

Hit play on the video below to see Matt’s drone footage of Kilchurn Castle in all it’s glory! You can download our drone policy and guidance from the HES website.

Want to get some pro tips for snapping the perfect shot of a romantic ruin?

Our photography edition of We love History Live, featuring expert advice alongside stunning photos and videos, is available to view on YouTube now.

Keep an eye out on our social media channels and e-newsletters for more Q&A live streams with Historic Environment Scotland experts!

Matt is a photographer, videographer and UAV pilot creating promotional imagery for HES, helping to tell the visual story of Scotland’s historic environment. View all posts by Matt Cartney