The macabre murder of Cardinal Beaton

In 1546 Cardinal Beaton was murdered in St Andrews Castle. He was a powerful man who had made many enemies in his life. Uncover the events that led to his assassination.

On 29 May 1546, Cardinal David Beaton was murdered in St Andrews Castle.

Cardinal Beaton was the last Scottish Cardinal prior to the Reformation. This was a challenging and deadly time to be the senior leader of the Catholic Church in Scotland. Uncover the story of how he made his enemies and what happened after his death.

Born near Glenrothes in Fife in in 1494, Beaton would go on to be a cardinal, Archbishop of St Andrews and Chancellor of Scotland.

The career path of the church was never far away as his uncle was James Beaton, the Archbishop of Glasgow, who in 1522 appointed him Abbot of Arbroath Abbey. 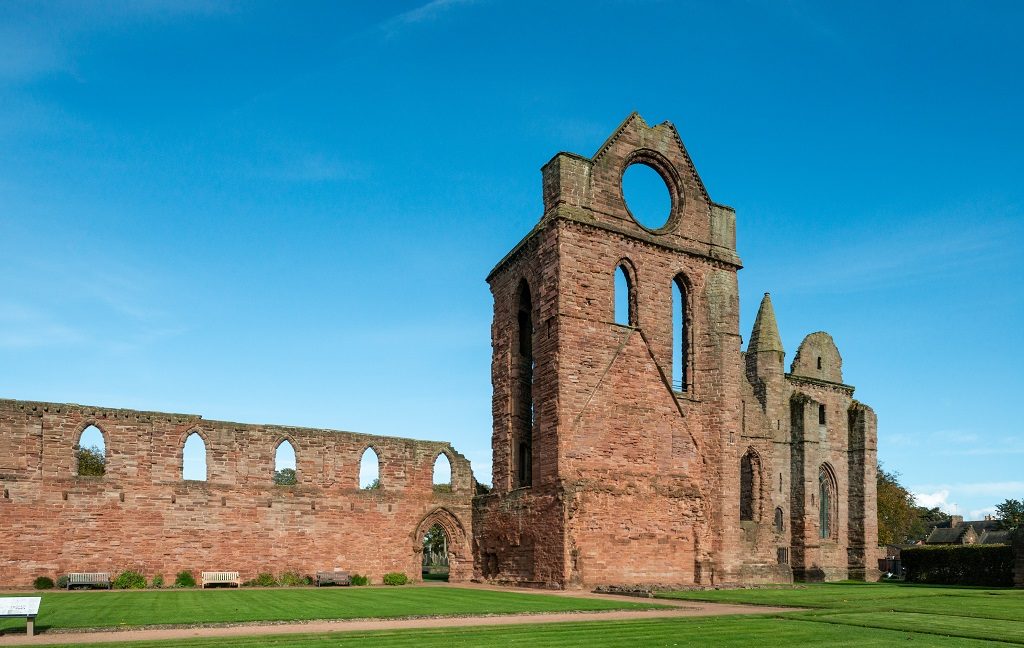 Thanks to his uncle’s influence, Beaton’s rise to power was rapid and he was selected by James V as Ambassador to France on multiple occasions before being appointed Keeper of the Privy Seal in 1528. He was eventually to become one of the King’s most trusted advisors.

A position of power

Beaton played a key role in arranging the two marriages of James V. Importantly, both marriages were to Catholic families of the French nobility. The matches were designed to forge closer links with France. The first of these marriages was to Madeleine of France, the daughter of King Francois I of France. When Madeleine died in 1537, Beaton was instrumental in organising James’s second marriage to Mary of Guise.

An ambitious man, Beaton continued to amass power. In 1538 Pope Paul III made him a Cardinal. In the same year he was appointed to assist his uncle in St Andrews in a role known as ‘coadjutor’. When his uncle died the following year Beaton became Archbishop. 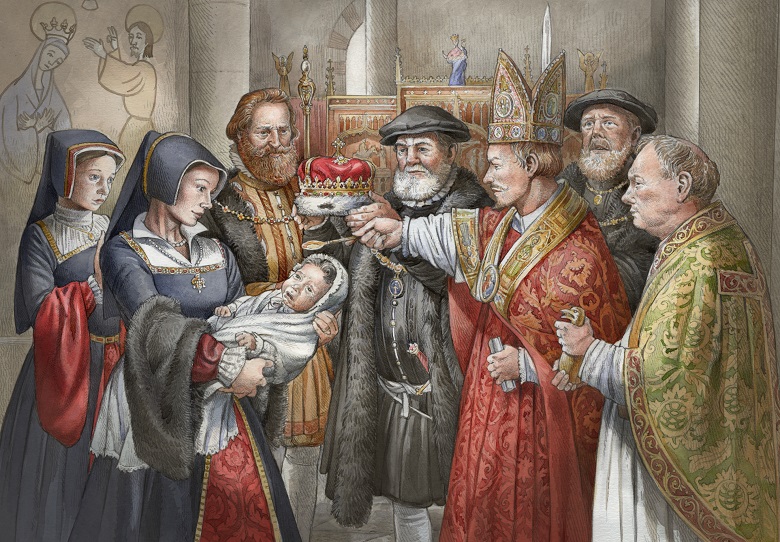 Illustration showing the coronation of Mary Queen of Scot’s with Cardinal Beaton officiating.

In 1542, James V died following the Battle of Solway Moss. The throne of Scotland passed to his 6-day-old daughter, Mary. As Mary was just an infant, regents would have to look after Scotland until she came of age. Beaton swiftly produced a document, allegedly from the King, suggesting Beaton should be one of the regents.  This document was largely suspected of being forged. The following month, Beaton was appointed Chancellor of Scotland by the Earl of Arran. Again, there was some suspicion that Beaton may have put pressure on the Earl to select him.

In what was an extremely politically turbulent period in Scottish history, Beaton was a very powerful man and gained himself a lot of enemies. As Chancellor of Scotland, Beaton enforced harsh penalties for heresy which made him very unpopular.

Both he and Mary of Guise championed the maintenance of the Catholic faith and a closer alliance with France instead of Protestant England. Henry VIII very much saw Beaton as a thorn in his side for his policy in Scotland.

Furthermore, he fathered a number of illegitimate children. He had eight children with a woman called Marion Ogilvy. She was his wife in all but name for two decades. It’s widely accepted that he also had children outside of this relationship. His conduct in his personal life is perhaps more shocking to a modern audience, but it was likely still frowned upon in his lifetime.

The Cardinal was also known to be spending vast sums of the church’s money as if it were his own. Having achieved much of his power through his uncle and after appointing his children to various well-paid positions in the church, many saw him as an embodiment of all that was corrupt and needed changed within the church.

In 1545, Beaton instructed the arrest of the Protestant preacher George Wishart who was a close mentor of John Knox. On 1 March 1546 in St Andrews Castle, Beaton had Wishart burned at the stake for heresy. This was the final straw for a lot of Protestants and prompted a savage retaliation.

At dawn on 29 May 1546, a number of Fife lairds, frustrated with Beaton on both personal and religious grounds, entered St Andrews Castle. 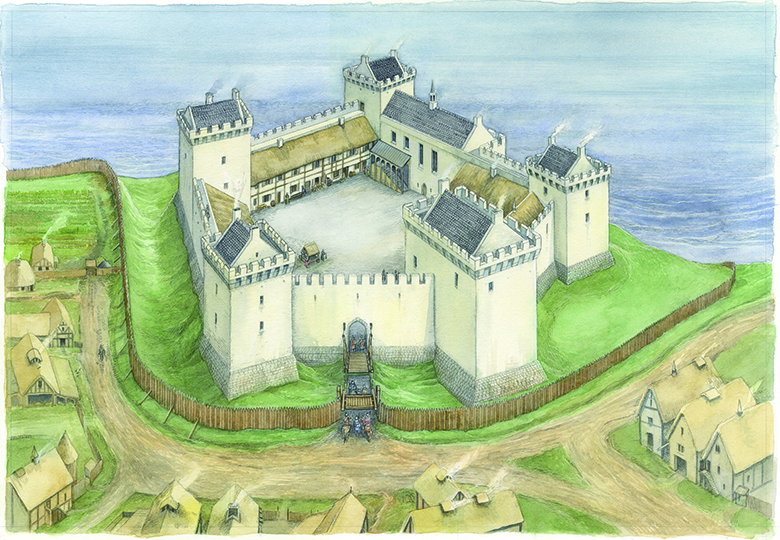 Reconstruction illustration showing how St Andrews Castle might have looked around 1520.

The group, led by Norman Leslie, master of Rothes, snuck into the castle disguised as masons. They executed the Cardinal and then hung his naked body in a pair of sheets from the castle walls, before throwing it into the castle’s notorious bottle dungeon.

In his ‘Historie of the Reformatioun of Scotland’, John Knox tells how Beaton’s corpse was kept in the dungeon at St Andrews Castle covered in salt to ‘keip him frome stinking’. It is not known where his remains were finally buried.

Outraged by the Cardinal’s assassination, Marie de Guise sent her troops to regain control of the castle from the Protestant Garrison.

The siege that followed, led by the Regent Arran on behalf of Marie de Guise, caused extensive damage to St Andrews Castle. It also resulted in the creation of the castle’s most remarkable features. In October of 1546 Regent Arran’s troops began digging a mine in order to undermine the Fore Tower or enter the castle. In retaliation, the Protestant garrison began digging a countermine. These underground passages of medieval siege warfare are unique. 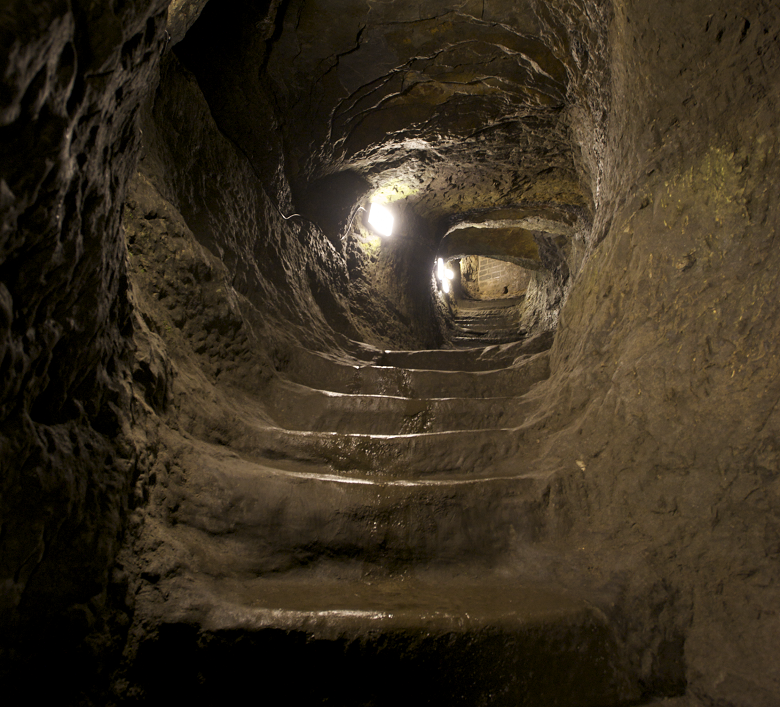 The mine at St Andrews Castle.

In July 1547, the French Navy arrived to assist Marie de Guise. The Protestant rebels finally surrendered after the castle was bombarded from the sea by French naval forces.

Beaton would be the last Scottish Cardinal before the Scottish reformation. His murder was a significant milestone in the power struggle between Protestant and Catholic forces as each sought to claim Scotland.