A Virtual Day Out At Iona Abbey

We’ve brought together some of our favourite resources to help you plan a virtual visit to Iona Abbey.

Longing for a day out at Iona Abbey? Us too.

Whilst everyone’s travel plans are on the back burner we want you to stay home, stay safe and stay engaged with Scotland’s fascinating heritage – but that doesn’t mean you can’t visit virtually! Fortunately we’re about to help you do just that, by taking you on a digital tour of one of Scotland’s most sacred sites.

Come with us on a day out to Iona Abbey – and you don’t even have to catch a ferry!

Did you know you can download our Audio Guide for free at the moment? Take a minute to don your headphones and be transported back to a sunny St Columba’s Day in the 1400s. You’ll hear the wind whistling around the abbey buildings, as well as the hustle and bustle of Pilgrims exchanging travel stories.

Medieval pilgrims (and modern tourists!) once arrived at Iona by boat and then followed a set path, visiting burial grounds, chapels, and places associated with St Columba’s many miracles.

Our audio guide will virtually walk you along Sràid nam Marbh (the ‘Street of the Dead’) towards St Columba’s Shrine, passing Reilig Odhrain (Oran’s Burial Ground) along the way. Generations of abbots and monks were laid to rest there, as well as great lords and warriors. According to medieval sources, early Scottish kings were buried in Reilig Odhrain too – although there isn’t much archaeological evidence for this.

These are the cloisters of Iona Abbey. The covered walkways were rebuilt in the 1920s-30s but they still hold the very special atmosphere of the tiny island and its original Benedictine abbey. New carvings were added later and completed in 1994.

We’ve seen some fantastic 360° tours going on over on Edinburgh Castle and Stirling Castle while we’re all in lockdown,…

The Iona Community, formed in 1938, has revived the abbey’s long tradition of work, worship and teaching.

You can find more about the abbey’s history in our Statement of Significance. If you’re a teacher or home educator, you might also like our ‘Abbeys and Priories in Scotland’ resource. It has games, a timeline and more to help get your class thinking about abbey life.

Columba was born in Ireland in 521 into a royal family of County Donegal. He was given the monastic name Colum Cille or, in Latin, Columba: ‘Dove of the Church.’ He began religious life as a child, and by his early forties had already founded several monasteries in Ireland. 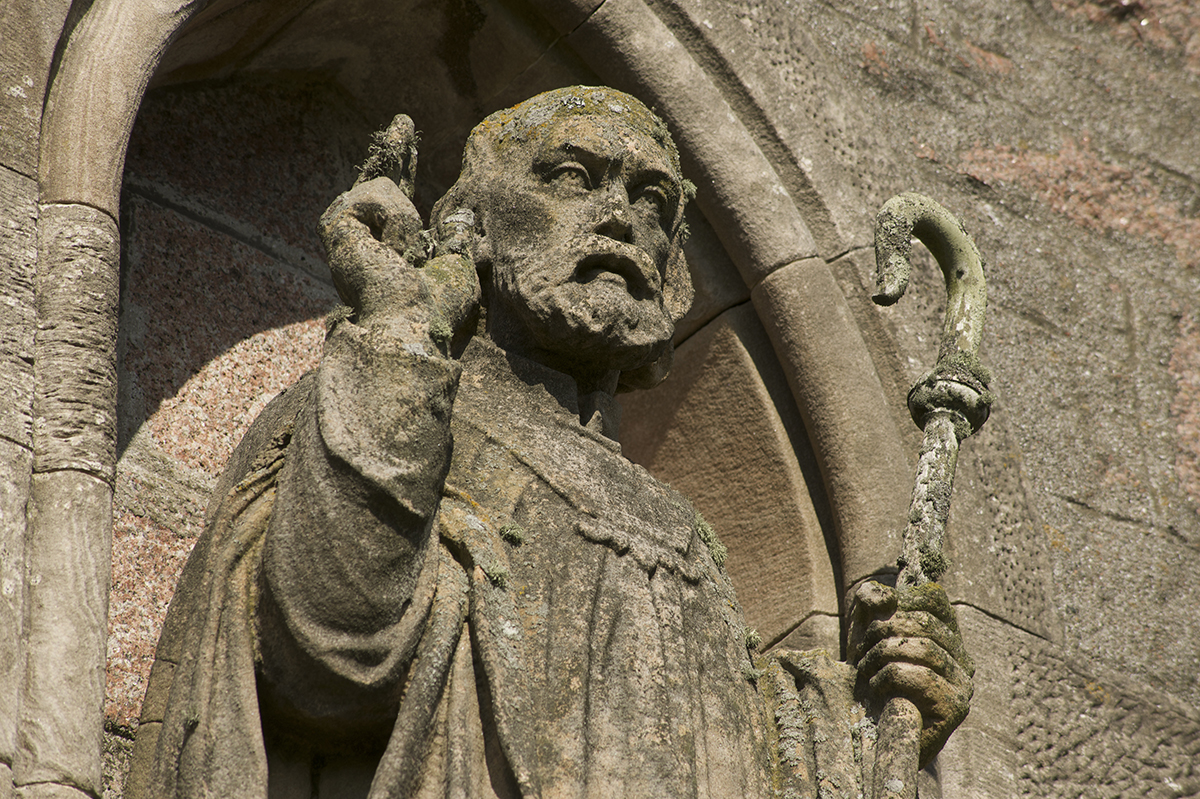 He arrived on the island with 12 disciples in 563. As the founder of Iona Abbey, his legacy can still be felt here. The tiny shrine chapel was created to contain his relics, which were the richest treasure of the monastery. It’s probably the oldest church building in Scotland.

Columba’s original monastery survived until the end of the 12th century, despite repeated Viking raids. Around 1200, the sons of Somerled – ‘King of the Isles’ – founded a Benedictine abbey here. Pilgrimage to St Columba’s Shrine continued to thrive, though monastic life on Iona ended with the Protestant Reformation of 1560.

In the 1950s, archaeologists uncovered a wooden structure near the abbey. In 2017, archaeologists from the University of Glasgow carried out some work that strongly suggested the dates of the Tòrr an Aba were consistent with Columba’s presence on Iona in the 6th century. We think this building was his writing hut.

Something to see here!

Outside the Abbey stands St Martin’s Cross, made some time between 750 and 800. High crosses like this one were invented here on Iona.

On special days, decorative mounts covered in gold and jewels were attached at the end of each arm. The shafts of the high crosses were carved with distinctive patterns and biblical scenes — repeated in the manuscript illumination and metal working that also flourished on the island. It’s thought that the world famous Book of Kells was made here, along with other great works of art. 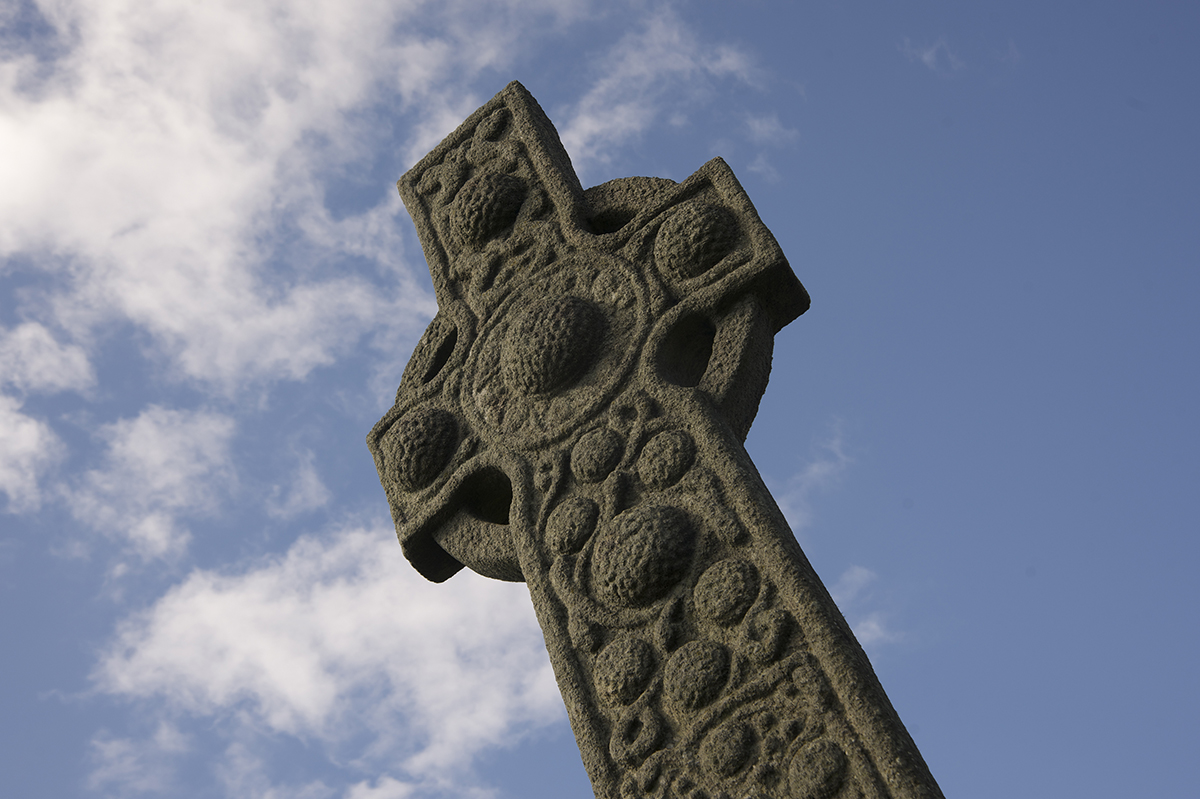 The crosses were a ground-breaking way of using art to convey the central messages of Christianity. You can take a virtual look with photos, drawings and archaeological notes in our Canmore archive. Our Collections database can also give you fascinating insights into the objects associated with Iona.

We’ve got lots of resources to help bring the abbey to life from home. Here are three of our favourites.

1. Take a look at some of the intriguing abbey objects, like St John’s Cross, in 3D on our Sketchfab page.

2. Get crafty! Download our ‘Make A Paper Abbey’ kit to create your own paper version of a medieval abbey and play with the figures inside – including monks, pilgrims and a scribe!

3. Finally, learn how to say ‘Iona Abbey’ in Gaelic so that when it’s safe for you to visit in person, you can impress us with your knowledge!