Rapunzel: Behind the Scenes

Filmmaker Stewart Kyasmire gives us a behind-the-scenes look at what went into creating Rapunzel, a Christmas cracker of a show from the National Theatre of Scotland and Historic Environment Scotland.

This year – despite all the odds 2020 has thrown at us – the National Theatre of Scotland has released Rapunzel, a theatrical Christmas film, created in partnership with Historic Environment Scotland and filmed at Stirling Castle.

It truly has been a pleasure working with the entire team involved. From the National Theatre of Scotland’s production staff to local Stirling Castle employees, they have made my own time working on the project enjoyable. Most importantly, they’ve allowed for a brilliant film to be made, for which they should all be proud.

Of course, 2020 has been a unique year for everyone, and even in December, I’m still learning how to adapt to this “new normal”.

Rapunzel will have been my third major production of the year, so mentally I’ve managed to come to terms with working under these new conditions and restrictions. But working on a project on the scale of Rapunzel, and on-site at the iconic Stirling Castle, brought with it some unique experiences. 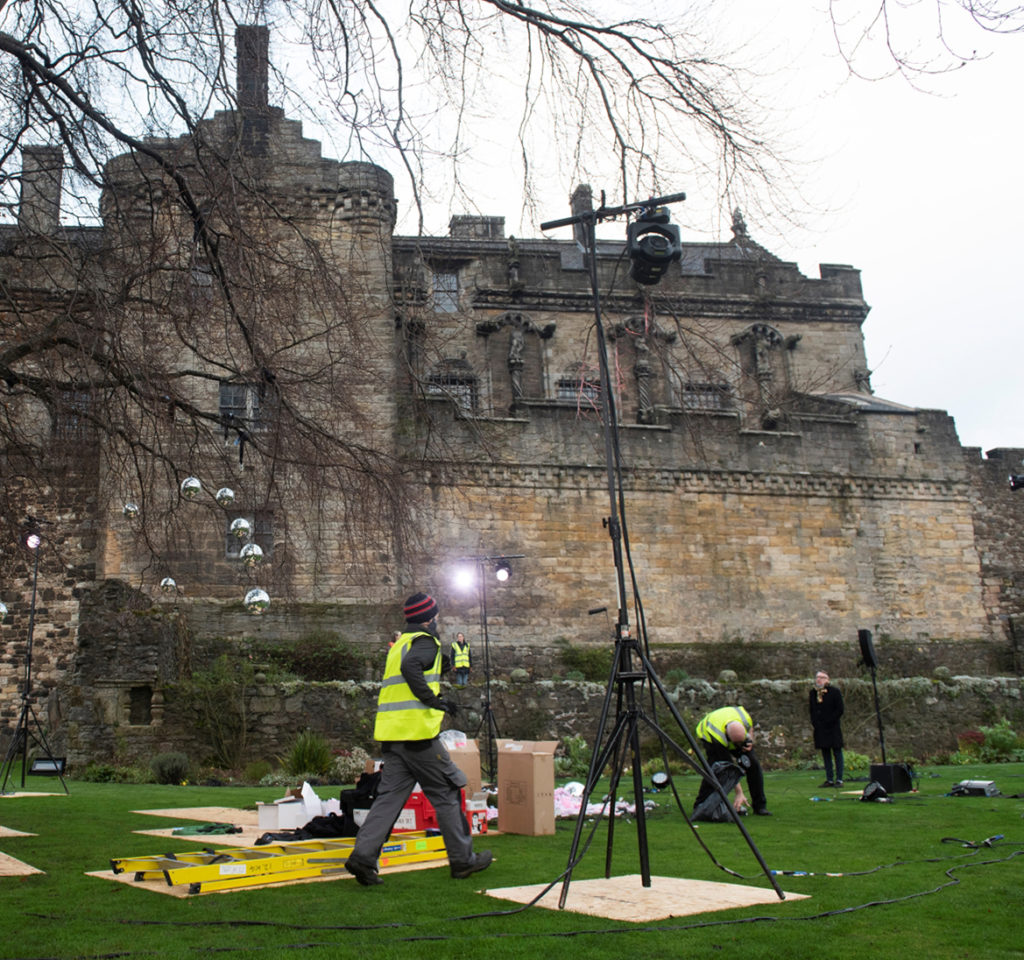 The first challenge was dealing with the number of people allowed on set.

Because of Covid-19 guidance, this was limited to 5 people in most cases. I would often have to strip my team down to a bare minimum, only keeping my assistant cameraman, sound guy, lead artist and co-director Johnny McKnight, and an actor in the room at any one time.

Fortunately, the entire team was adaptable and so we didn’t face too many issues because of it. The big open-plan rooms of Stirling Castle also meant everyone could quickly move between spaces when need be. 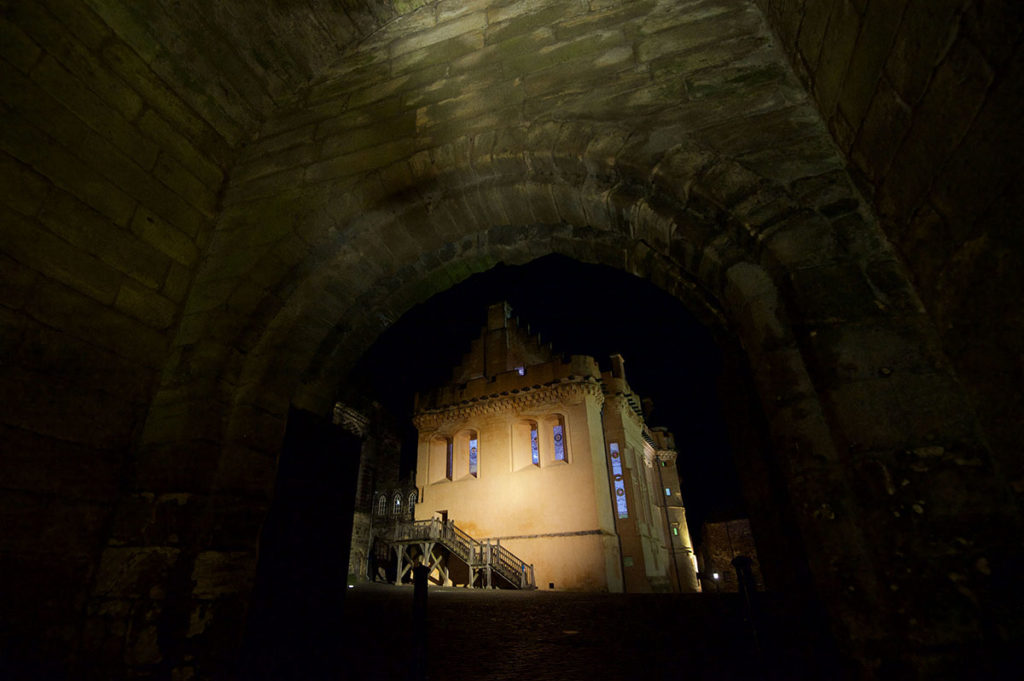 A palace fit for … filming?

The second challenge was navigating the film’s historic backdrop. We used various indoor and outdoor locations around Stirling Castle. These historic settings were built for royalty and for defence, not for filming!

The castle presented unique challenges, from dealing with cabling for power, finding ample space to safely fit equipment and people, and of course, dealing with the typical cold Scottish weather. Although sometimes the weather was on our side! Amazingly, on our shoot with ‘Rosey Posey’ (played by the talented Darren Brownlie) outdoors in the Castle gardens, the rain started as soon shooting finished. If that’s not a Christmas miracle then I don’t know what is.

As with all shoots though my team and I had, of course, done our research. With my fellow director, the talented Johnny McKnight, I spent several days before shooting scouting out each location. So, when the day came to shoot, we had numerous options and visualisations for how we could go about achieving the shot we wanted if something went wrong. (Like if that Christmas miracle of a dry shoot in the gardens had never come to pass.) 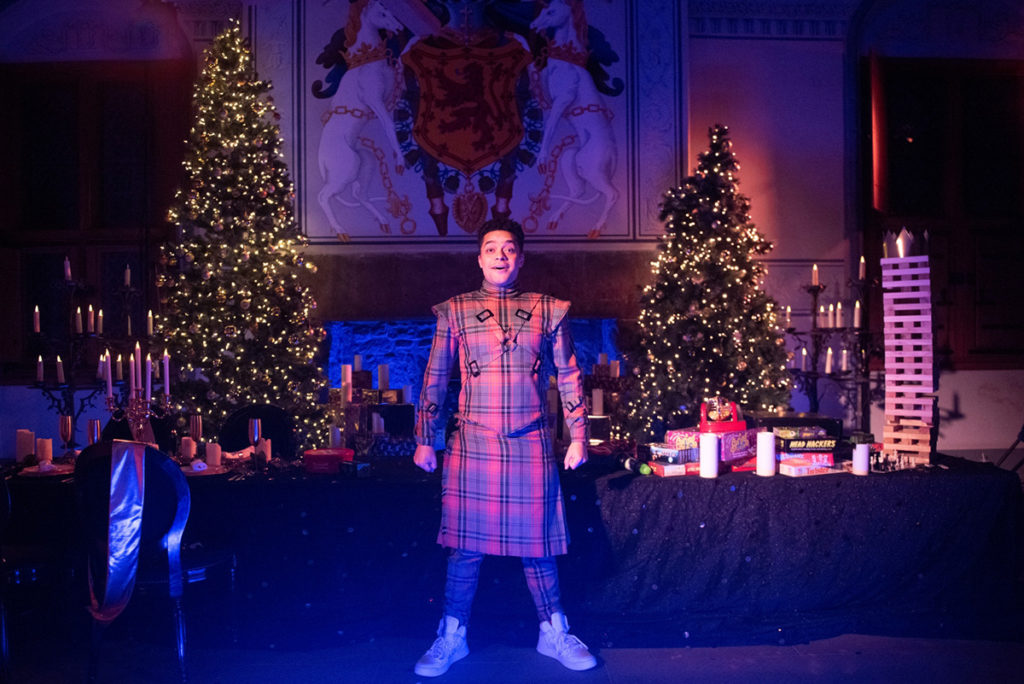 Apart from these couple of challenges, however, shooting Rapunzel in Stirling Castle was, and there’s no other way to really put it, a lot of fun.

Every filming location in the castle was spectacular. The contrast between our elaborate set design and the ancient castle architecture really makes our shots stand out.

Meeting new characters every day, with fabulously handcrafted sets to accompany them honestly made my job a breeze. Full credits go to Kenny (designer), Lizzie (lighting designer) and of course Ben (lighting programmer) for the amazing set design and lighting of each scene.

Aside from the visual aspects of the production, you’d be surprised at the effect of filming a music scene every day has on you. I’m sure I now know every word from the main music track of Rapunzel – which is also being released as an accompanying digital album – so an enormous well done to Nova Sounds who produced the songs.

All in all, I think the production really is a testament to what good team working achieves when Theatre, Film and Heritage are in sync. 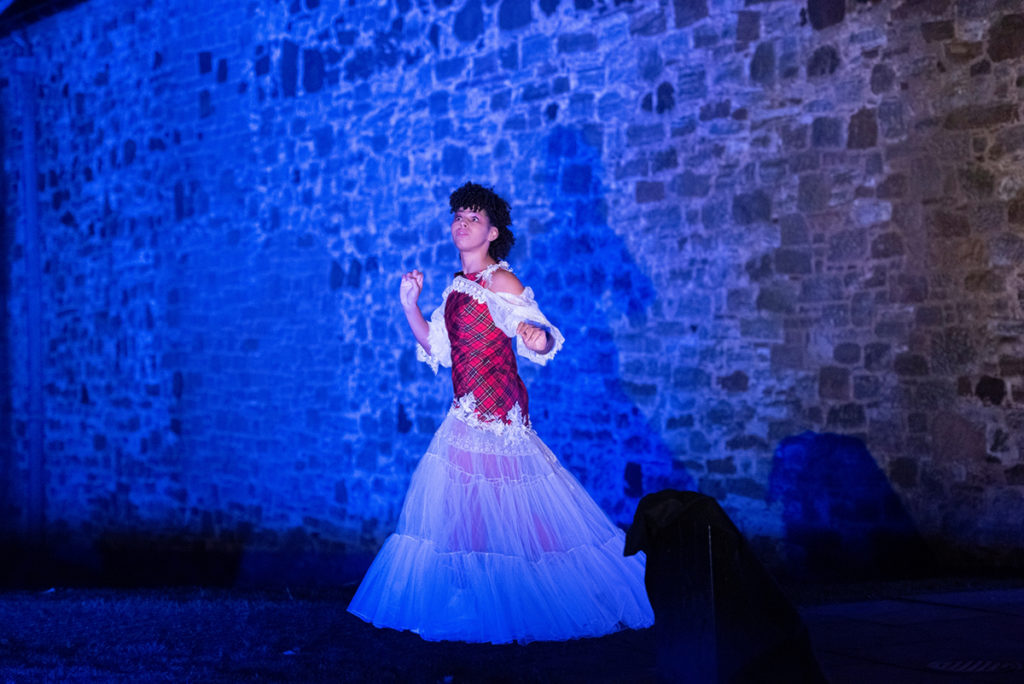 Representation on screen and stage

With the pandemic forcing us all to reduce fewer physical interactions recently, it is such a pleasure to be around such a passionate bunch of people. Despite the past year of negativity, it is a positive reminder at what humanity can achieve when given the tools to do so.

Taking a step back from the specifics of shooting, I really do feel grateful to have had the opportunity to be a part of this wonderful production.

I directed the BBC Scotland documentary ‘Black and Scottish’ last year and as a Black Scot myself, I feel extremely passionate about not just creating beautiful films, but creating representative and positive stories. This is something I think that the National Theatre of Scotland’s Rapunzel has done and executed extremely well. 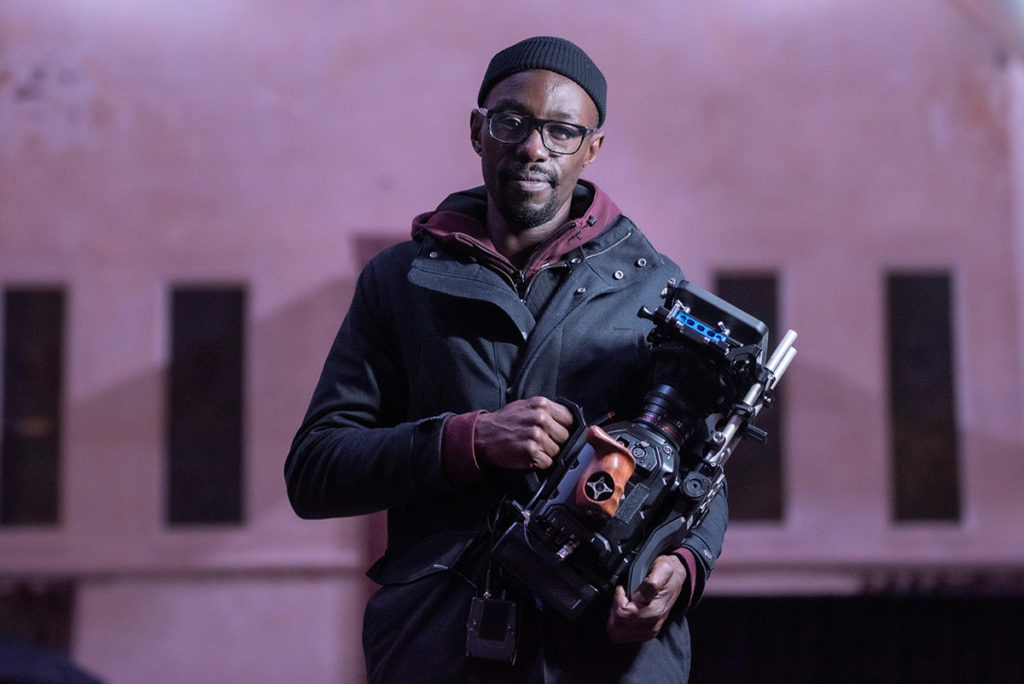 This is my first introduction to the world of theatre, but as with most other industries I’ve worked in, BAME (Black, Asian and minority ethnic) groups have typically been under-represented both on and off stage/screen. It was a such a refreshing surprise and honestly one of the main reasons I decided to take the project then when I saw that not just was the lead character Black, but so too were two of the other main characters.

Too often in our society, BAME people are side-lined to more derogatory roles, stereotyped as “the bad guy”. So, to see the beautiful tale of Rapunzel told with a largely BAME cast is truly heart-warming. 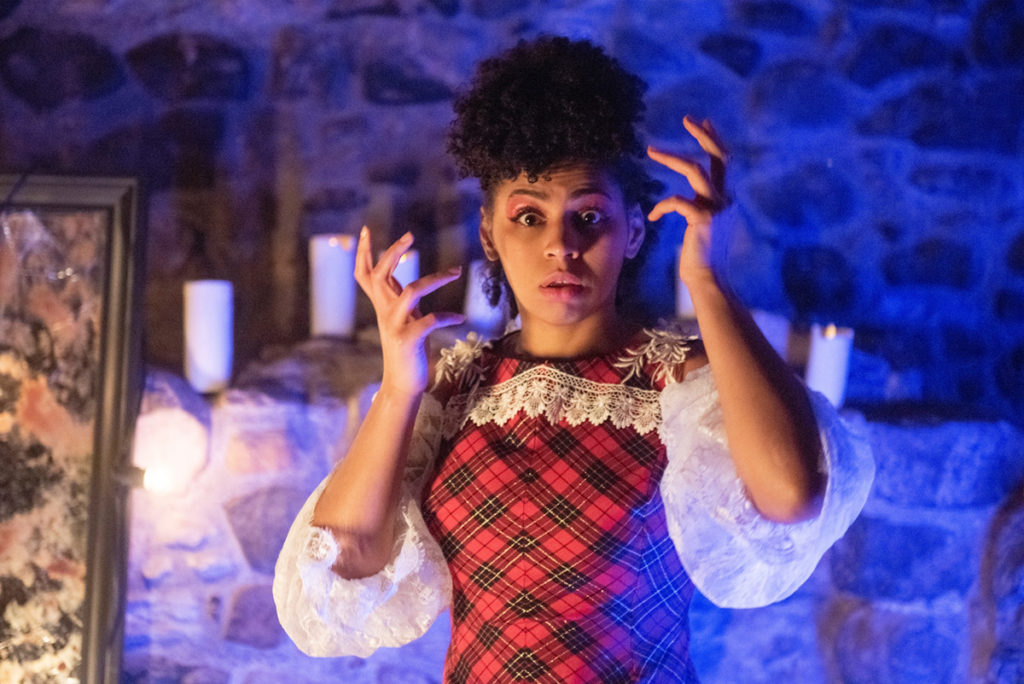 I’ve four kids of my own, so I know just how important it is for them to grow up seeing people that look like them, telling positive stories and spreading love. I know that if I can make my little girls smile, then I have a pretty good chance of making other little kids smile somewhere else in the world. Knowing I’ve given them someone to look up to, someone to take a positive lesson from is what motives me, and that’s when I know I’ve done my job right.

Although many people won’t believe it, this seemingly minor act of representation bridges huge cultural and societal gaps that we have in this country, and as a film, does so much more than just tell the story of Rapunzel.

I’m really excited for everyone to finally get a chance to watch the film and I already know people are going to be surprised when they see what a stunningly visual, festive treat everyone has created.

For more info and to book tickets for Rapunzel please visit: nationaltheatrescotland.com/rapunzel 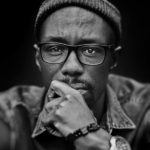 Stewart Kyasimire is a filmmaker, columnist and founder of Scotland’s first and only Black-led tv production company ‘Create Anything’. He recently directed a ground-breaking documentary for BBC Scotland – ‘Black and Scottish’ – sharing stories from prominent black Scots from all generations. ‘Behind the Smile’ with Bash the Entertainer is Stewart’s next documentary due for release in October for Black History Month. This documentary tackles racism, mental health and social media. Throughout his career, Stewart has also created online content for BT Sport, BBC, Nike, Magners, Lloyds Banking Group and Levi’s.