Many of Scotland’s historic places contain features which may have hidden meanings. Join us as we take a look at some of our favourites.

Who else enjoys the rush of excitement you get when you spot something weird or surprising in Scotland’s old and ancient places? Or the sense of satisfaction when you decode hidden meanings? Some folks might disregard a historic ruin as “boring” or not much to look at. But others know that a bit of curiosity and patience can bring rewards!

Masons’ marks, tell-tale signs of lost features, and peculiar details can all capture the imagination. Some are easy to explain, others might forever remain a puzzle. Today we look at some top picks for curious or hidden features at places cared for by Historic Environment Scotland.

And, just to save any blushes, we should probably let you know the final entry here includes some imagery that might not be suitable for work or children’s eyes. Scroll on at your own risk!

Dumbarton Castle has one of the longest recorded histories of any stronghold in Scotland. Mentions of the castle date back to the Dark Ages. Could a twisted face set into the guardhouse wall point to an important story from the castle’s long history? 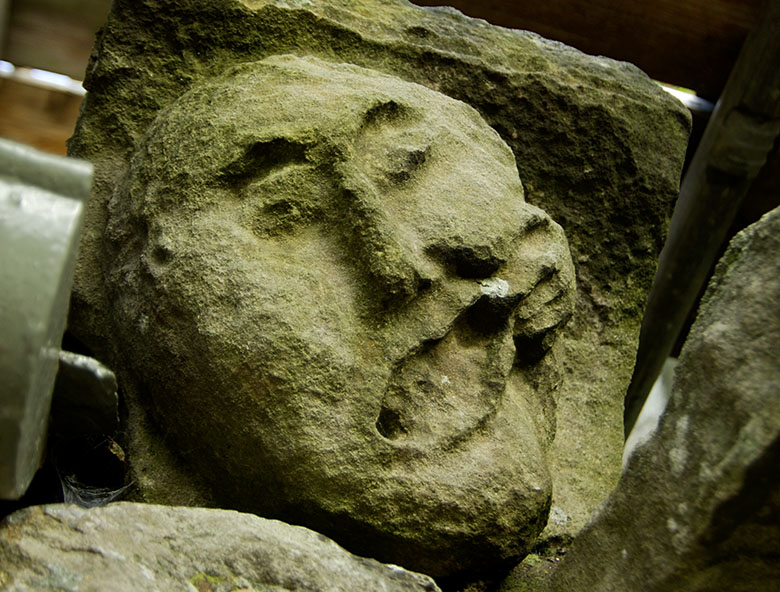 This little carved face peeks out from the masonry of the guardhouse. The grimacing face is said to represent Sir John Stewart of Menteith, keeper of the castle.

It’s likely that Sir John’s troops captured the fugitive William Wallace in 1305 and handed him over to the English authorities. Wallace was transported south to London where he was found guilty of treason and atrocities against civilians in war. In response to the charges he reportedly said, ‘I could not be a traitor to Edward, for I was never his subject.’ Wallace was dragged by horse to Smithfield where he was hanged, drawn and quartered.

Thanks to his part in Wallace’s capture, Sir John is also known as the ‘the fause (false) Menteith’. 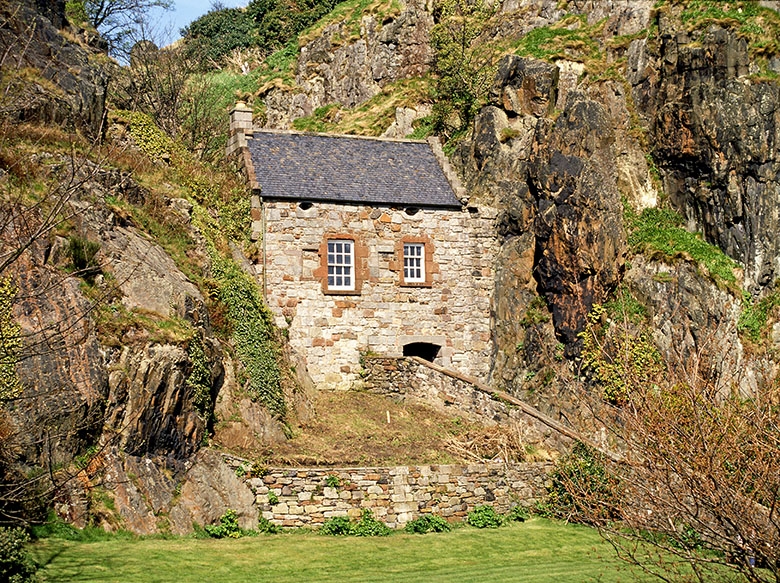 The guardhouse at Dumbarton Castle.

The legend also says that Wallace was held at Dumbarton Castle for a short period but, as far as we know, there’s no evidence to support that.

While we can’t confirm that this is definitely a depiction of Mentieth, it certainly gives us an excuse to talk about one of the past guardians of Dumbarton Castle.

A host of hidden meanings

Are you ready to be overwhelmed by more hidden symbols and inferred meaning than a Dan Brown novel? Then let’s take a look at the Marian Embroideries. These are a collection of 37 needlework panels created by Mary Queen of Scots during her exile in England.

The original pieces are displayed at Oxburgh Hall, Norfolk, and the Palace of Holyroodhouse, Edinburgh. At Edinburgh Castle, we have exquisite replicas made by the School of Ancient Crafts Heritage Sewing Group between 2014–17. 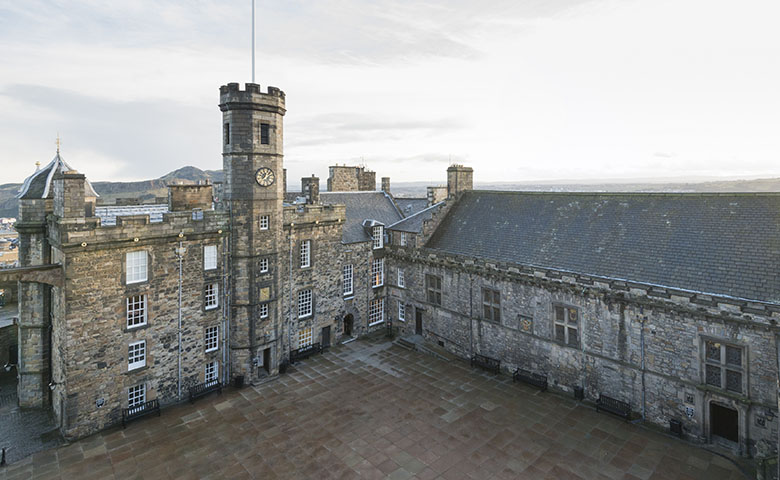 The replica embroideries are on display in the Royal Apartments at Edinburgh Castle.

Mary sewed the embroideries while she was under house arrest. The work was done alongside the noblewoman Bess of Hardwick, the wife of the queen’s jailer.

There’s a rich language of symbolism woven into these embroideries. You can download a guide over on the Edinburgh Castle website, but here are a couple of our favourites. 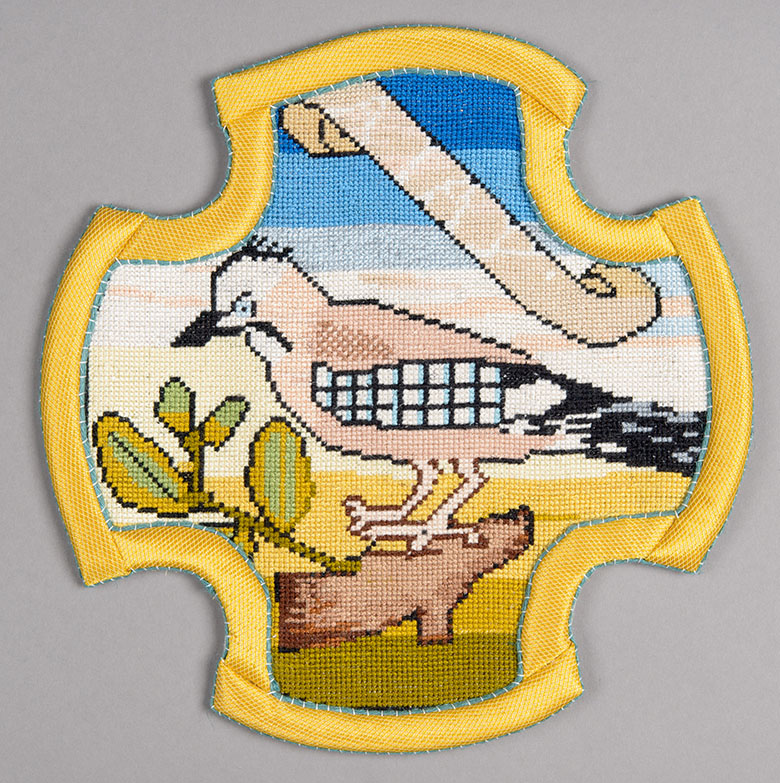 This replica embroidery was created by the Heritage Sewing Group.

The colourful noisy jay symbolised gossip. Mary struggled to protect her reputation against scandal and slander, not least from rumours that she’d had her second husband Lord Darnley murdered and was plotting against her cousin, the English queen Elizabeth. 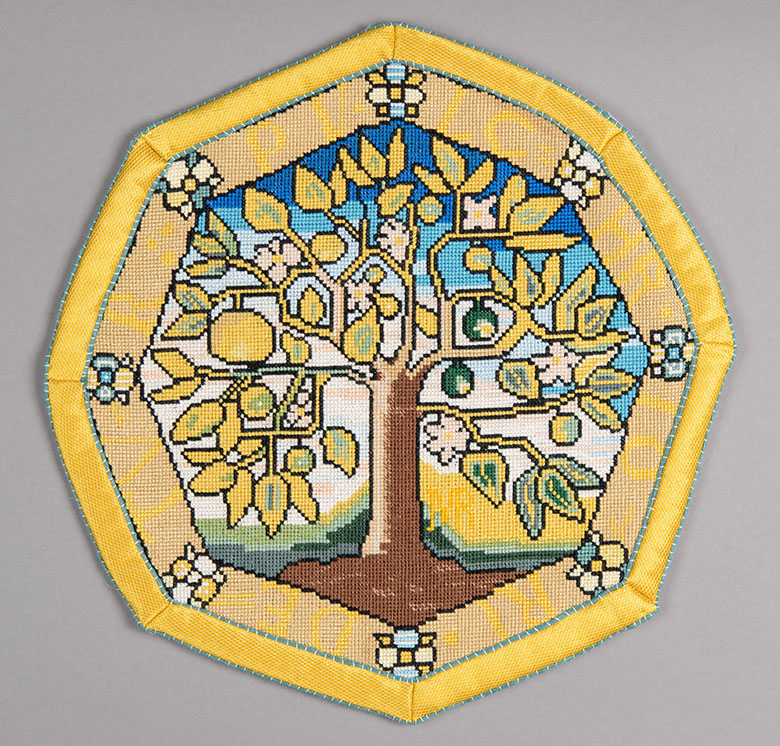 33 volunteers spent more than 7,300 hours working on the project to create these replicas.

The apple tree with the surrounding Latin text pulchriori detur – let it be given to the fairer – alludes to the legendary Judgement of Paris. In the ancient Greek story, the Trojan prince Paris awarded the Golden Apple of Discord to the fairest of the goddesses. This might hint at the rivalry between Mary and her English cousin Elizabeth.

Could one of the ornate carved panels at Caerlaverock Castle allude to a historic grievance and persecution? 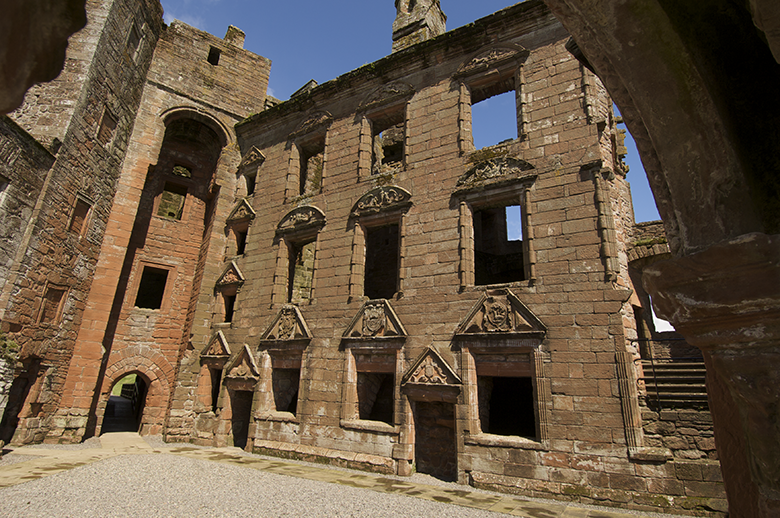 The Nithsdale Lodging is one of the finest examples of Renaissance architecture in Scotland.

The Nithsdale Lodging is an impressive mansion house, built inside the walls of the medieval fortress by Robert Maxwell in the 1630s. Its façade is covered in a set of impressive decorative carvings. In its heyday these would probably have been brightly painted.

The carvings feature coats of arms and scenes from classical mythology. Among the scenes we see here are possible depictions of the stories of Patroclus and Prometheus. Why is that significant?

Well, there’s a theory that it may relate to the trials and tribulations of the Maxwell family. The family were Catholic and suffered under a Protestant king.

This carving shows vultures pecking the corpse of Patroclus.

In the Greek myth of Patroclus, the hero Achilles did not allow the burial of his close friend Patroclus’ body after he was killed in battle. Here the corpse of the warrior is shown being pecked by vultures. It has been suggested this could refer to a troubling episode from the Maxwell family’s past. Robert’s late father lay unburied for five years after his death, as a punishment for his Catholicism.

This carving shows the Greek hero Prometheus bound to a rock as punishment.

And last, but not least, we’ve got a slightly rude and crude one! Stop scrolling now if you have delicate sensibilities.

A cheeky chappie at Elgin Cathedral

Elgin Cathedral, known as the ‘Lantern of the North’, is one of Scotland’s most beautiful medieval cathedrals. 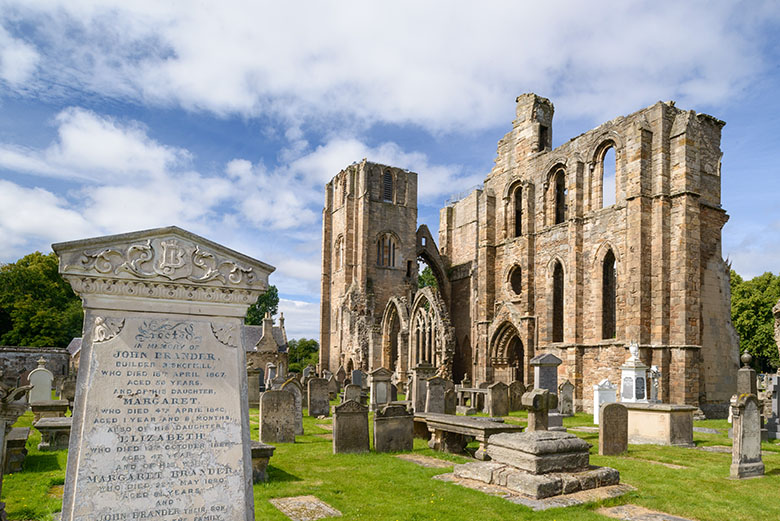 It was once richly carved and adorned with stained glass and painted decoration. A fine collection of architectural fragments hints at the building’s lost beauty.

Hidden behind the shield of this vault boss (a decorative bit of the ceiling) is a secret sculpture. 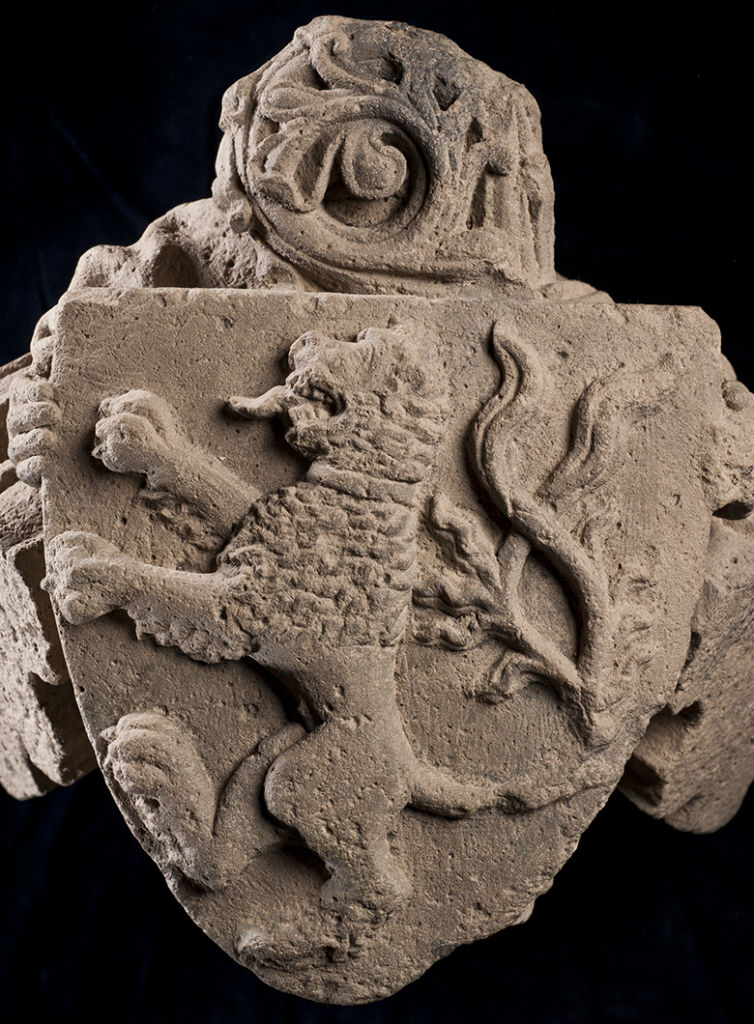 At first, it looks like a simple coat of arms – possibly those of Bishop Columba Dunbar (1422–35). However, look closely and you’ll see fingers clasping the sides of the shield. Hiding behind is a crouching hooded figure. His robe is bunched up around his middle and – if you crouch down yourself – you’ll see that he is naked below the waist. Be warned, though, he is anatomically correct! 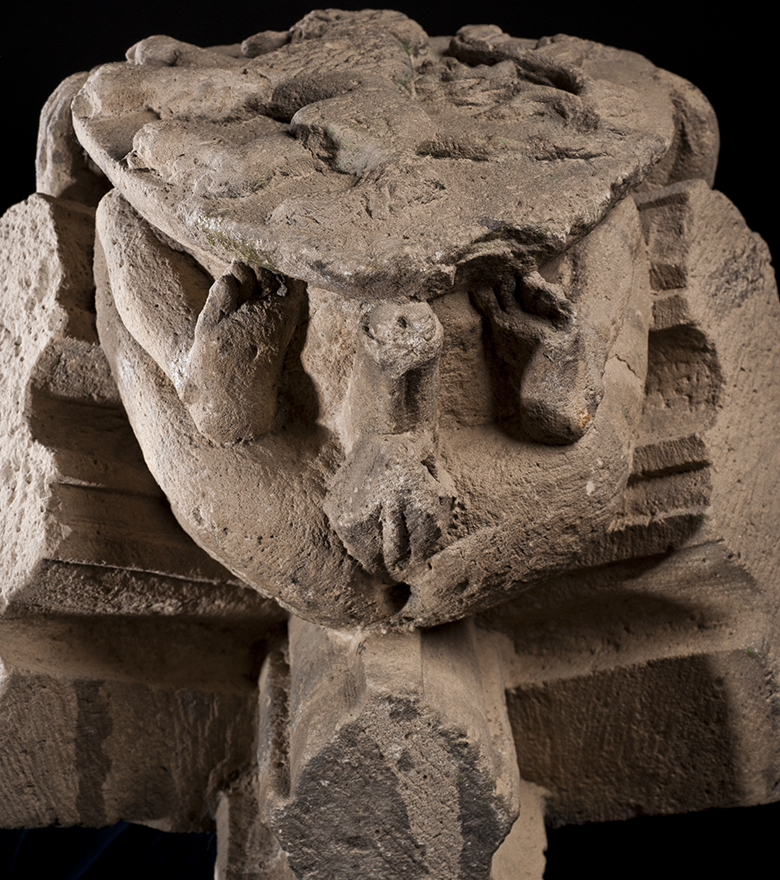 The stone formed part of a vaulted ceiling, so the figure would have been high up and hard to see. Could it be a swipe at the monastic orders, living their holy lives inside abbey cloisters? Perhaps a reminder that sin can hide behind a mask of innocence? Or was this naughty nudity just an in-joke among the masons?

We’d love to know if you’ve found anything surprising at one of our sites. Or perhaps you’ve spotted something you’d like to know more about? Either way, we’d love to hear from you. You can get in touch on Facebook, Instagram or Twitter or leave a comment on this blog.