The Trial of Pavel Kravař

Find out about Pavel Kravař, the first person burned at the stake for heresy in the town of St Andrews.

On a July day in 1433, smoke and the smell of burning flesh spread over Market Street in St Andrews. Pavel Kravař, a physician from overseas, was being burned at the stake; a living man was reduced to ashes and soon forgotten.

How had it come to this?

St Andrews was a power base of the medieval church and an intellectual centre of educators and thinkers. Scotland’s leading bishop resided in his castle with his seat in the newly refurbished cathedral flanked by an Augustinian priory.

Under this strong arm of the church, the University of St Andrews had been established two decades earlier. Books were circulated, ideas debated, and doctrine taught.

Doctrine was also followed. The parliament of James I had instructed all bishops to root out heresy, and every teacher at the university took an oath to defend the church.

Pavel and the heretics of Prague

Meanwhile, Pavel Kravař, a lad perhaps from the Duchy of Silesia (then Kingdom of Bohemia, now mostly in Poland), was going places. He graduated as a Bachelor of Medicine in Montpellier and went on to earn a master’s degree in theology from Paris in 1415.

A homeward journey took him to the University of Prague, which two years after Kravař‘s entry to the faculty sided with Hussite reformers. The Hussites had heretical ideas, which included:

The more radical went as far as to claim that saints, pilgrimage and monastic life had no basis in the Bible. 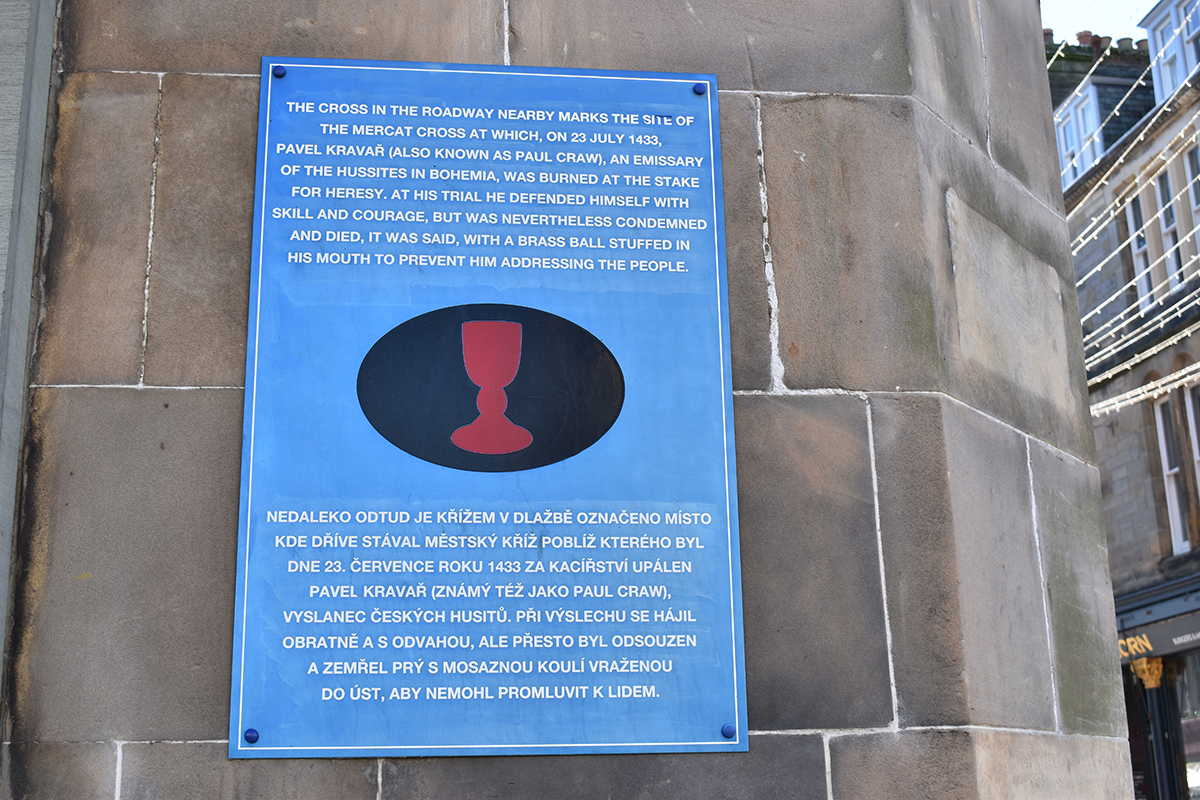 A plaque on Market Street commemorates the place Pavel Kravař was burned at the stake.

Man on a mission?

For the next decade he served the Polish king Władysław Jagiełło as a physician. He may not have been important enough to ever meet the king, and we cannot say whether his position covered a side hustle of spreading Hussite beliefs.

He had at least adopted those beliefs, and by 1433 at the latest he was on his way to St Andrews carrying letters from Prague recommending him as a skilled medical practitioner.

He may have carried something more – those Hussite manifestos spread across Europe one way or another. The odds are, Kravař was headed for our ecclesiastical capital to recruit support for the Hussite reforms. In a town teeming with canons, friars and scholars, perhaps he expected to meet a sympathetic listener?

What he met, however, was a diocese, a priory and a university with zero chill about heresies. He met the bishop Henry Wardlaw, the prior James Haldenstone, and the dean Lawrence of Lindores. He met the Scottish inquisition. 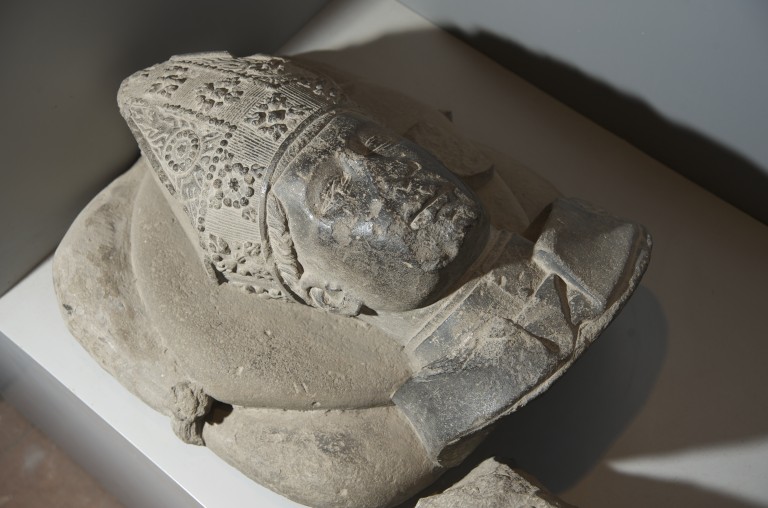 Head of the stone effigy of bishop Henry Wardlaw, on display in St Andrews Cathedral museum

There was no torture chamber, no thumb screws, no gore. By law, Wardlaw’s duty was to “cause an inquiry to be made by the inquisitors of heresy, where any is found.” He probably apprehended Pavel Kravař in St Andrews and accused him of heresy, leaving him for Lawrence of Lindores to deal with.

In addition to his role in the Faculty of Arts, Lawrence of Lindores was also the Inquisitor of Heretical Pravity. He would have summoned a court of learned theologians for Kravař‘s trial. Records do not survive, but Haldenstone was a likely participant having served as the dean of the Faculty of Theology. 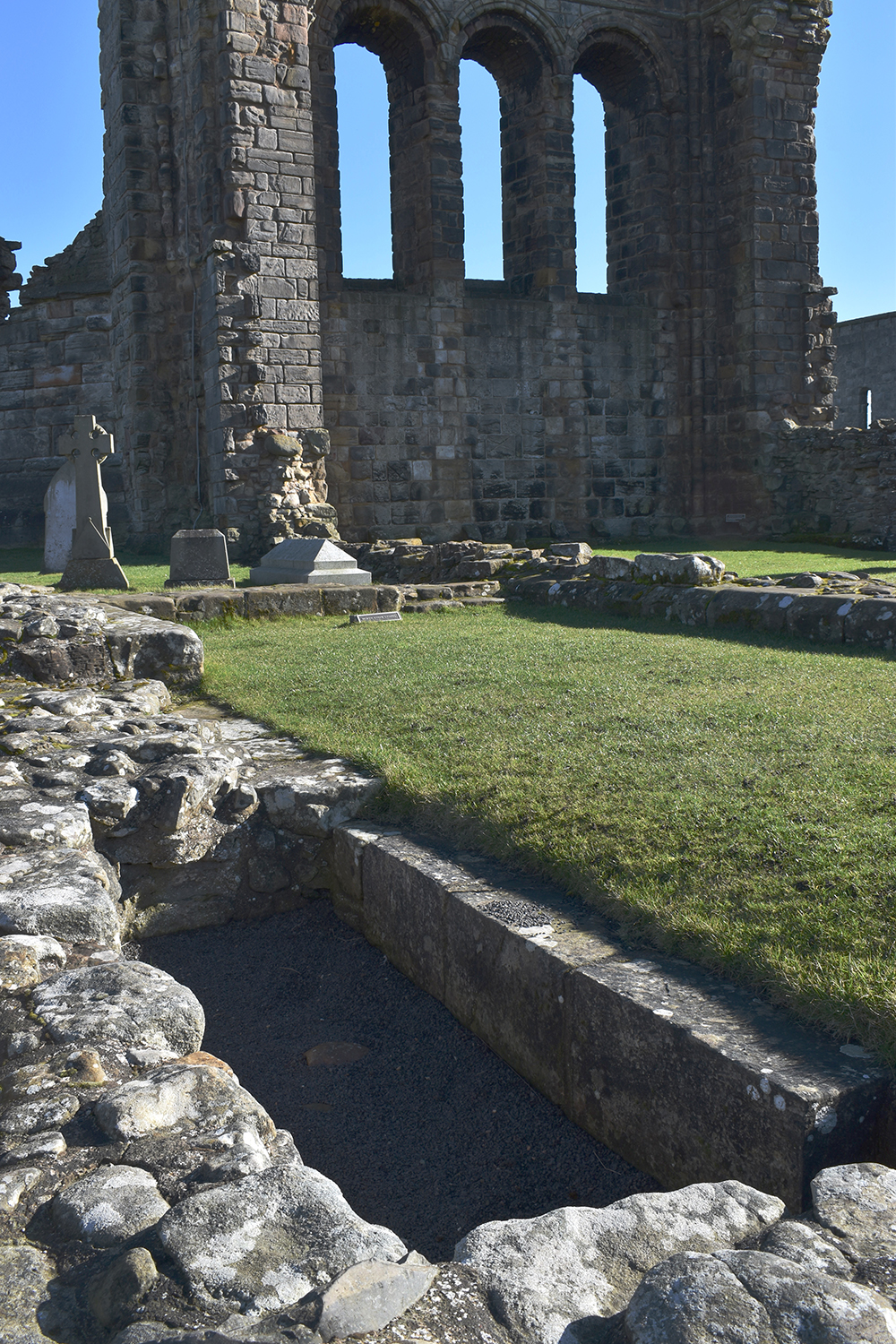 Kravař knew his Bible and defended himself with skill, but did not budge on his principles. At times, other defendants did; they recanted and walked free.

He must have known he was facing execution. Does that make him a hero who did not compromise on his convictions, or a stubborn fool who threw his life away?

The men who condemned Pavel Kravař

Were Wardlaw, Haldenstone and Lindores cruel and vindictive men?

Henry Wardlaw supported the foundation of the University not only on paper but also from his own pocket. For a short time, he looked after the young future James I “in a most humane fashion.”

” …he was ane excellent man, and repressed many disorders that had creept in among the clergie, and was so extremelie addided to hospitalitie, that being asked by his servants whom he would first name and set down to be entertained at his house, he answered, Fife and Angus.”

James Haldenstone criticised Lawrence of Lindores’s failure to condemn every suspected heretic. Later, he discharged the duties of the Inquisitor himself with zeal. Haldenstone was also an energetic prior, sprucing up the cathedral and promoting its shrines across Scotland.

“He was a very cheerful and congenial man, red of face with a ruddy complexion, his hair turned white, and of medium build; he was severe in his rebukes, gentle in showing pity, lavish in spending, courteous in conversation, disposed towards compassion. Indeed he was extremely tender-hearted towards the unfortunate and the needy, and on this account he distributed and gave to the poor.”

Lawrence of Lindores made a name for himself in European universities as a philosopher. He guided many Scots to graduation whilst he was still working towards his doctorate at the University of Paris. He was a formidable influence on academic life in St Andrews.

“…most reliable cleric and famous theologian whose sanctity of life was highly regarded.”


Walter Bower on Lawrence of Lindores in Scotichronicon

After the smoke cleared

Nearly a hundred years passed before the townspeople of St Andrews witnessed another martyrdom.

The next four men executed for heresy there were Protestants. Some of what they preached would have sounded familiar to Pavel Kravař.

But where Kravař gained no sympathy and his suffering was largely forgotten (leading to his nickname of ‘the missing martyr’), the time and trials of the Protestants were different. The stance of the bishop, the prior and the university was changing, and the fire from the pyre of the last heretic would not stop the tide of reformation that was to engulf St Andrews and Scotland.