What do you do when you want to include an unmovable ancient stone in an exhibition? Make a new one, of course!

That’s exactly what we did when assembling the 50 amazing artefacts which make up our brand-new exhibition telling the story of Arbroath Abbey. Read on to go behind the scenes of our Pictish project…

A vision of St Vigeans

As well as marking the 700 years since the Declaration of Arbroath, we wanted to show that the region had been a focus for Christian worship since Pictish times.

The idea was floated that we might include one of the Pictish carvings from St Vigeans Museum, just up the road from Arbroath. 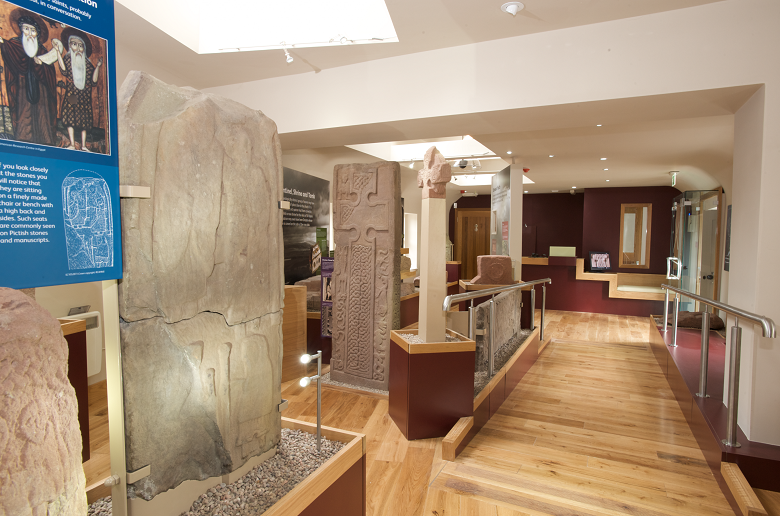 After some discussion, we decided this wasn’t the best course of action. The carvings at St Vigeans form a complete set, found in and around the village church, and to break them up just wouldn’t be appropriate.

But the idea was interesting. We were particularly keen on one specific stone. On one side is a vivid depiction of a stag, at rest but glancing warily over its shoulder. And on the other side, a griffin-like creature perched in the corner of an ornate cross.

Could we make a copy? Our Digital Documentation team had already made a 3D scan of one side (which you can check out below), so maybe it could be 3D printed. Or should we think about a plaster cast …? 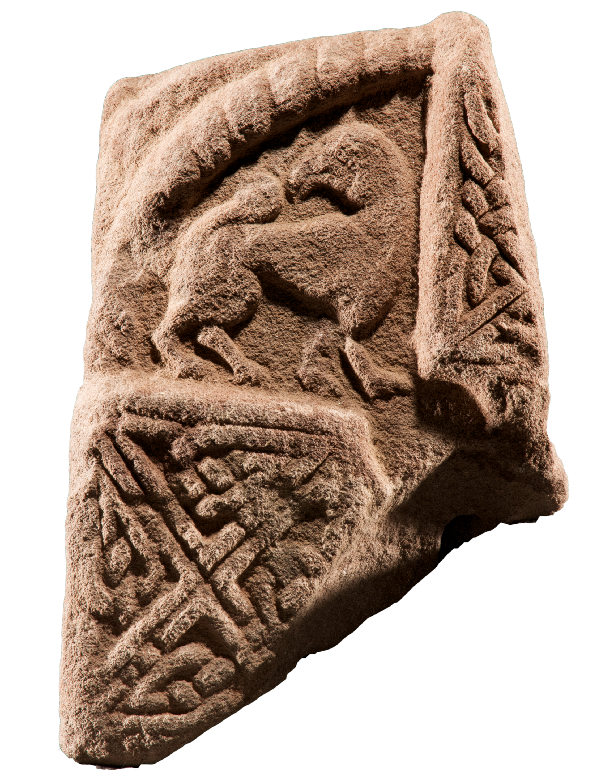 But then Christopher Muniz, project lead for the exhibition, hit on an ingenious idea. We employ a number of highly trained stonemasons – would one of them be willing to carve a copy?

Would they? You bet they would! There was a lot of enthusiasm for this idea from our masons and from the local conservation team.

And so we found ourselves, at the end of February, with an embarrassment of riches: a choice of six hand-carved replicas to choose from. They came from HES stonemasons around the country: from Blackness and Elgin, Dirleton and Lesmahagow, St Andrews and Orkney.

I was glad to share the responsibility of choosing the one to be displayed at Arbroath with some well qualified colleagues: Stone Conservator Colin Muir, District Architect David Borthwick, Collections Manager Beth Spence and the aforementioned members of Clan MacFarlane. 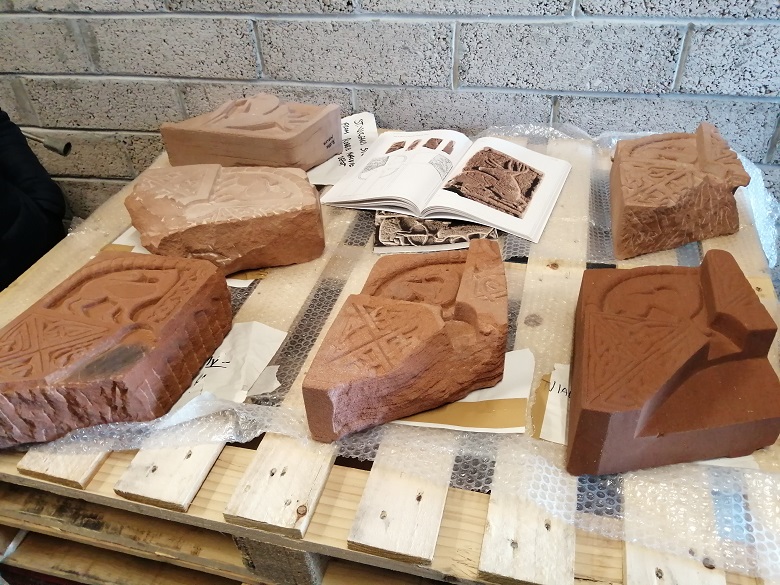 The six entries, alongside a photo of the original in our publication ‘Hunting Picts’

All six copies were extremely skilful and all had unique merits. It was amazing, too, how much room there was for creative interpretation, working from photographs, drawings and a life-size 3D print of the stag side.

We’d asked the stonemasons to depict the stone as it is now: a smallish, damaged fragment of a freestanding slab, exposed to well over 1,000 years of Angus weather. Some chose to show the carving in pristine condition; others subjected their finished designs to deliberate damage. 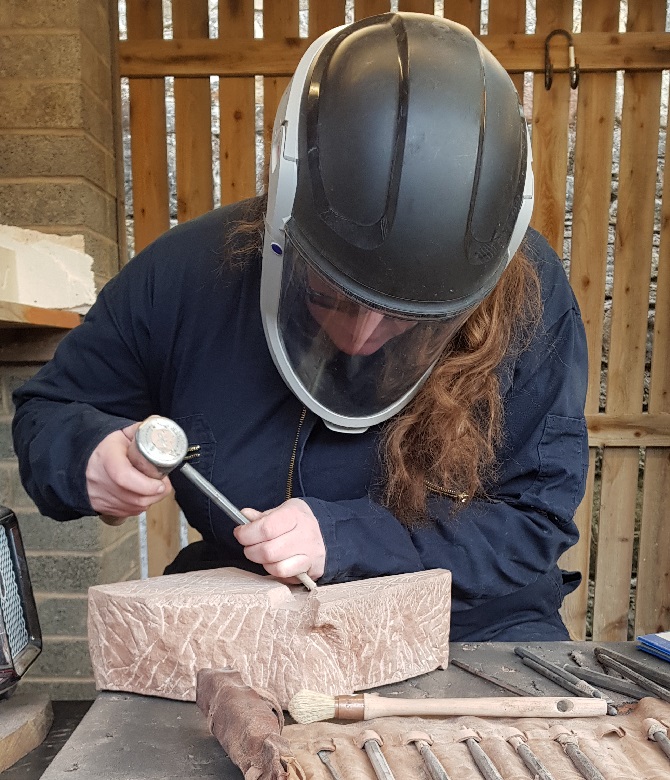 In the end, we chose the copy that we felt most accurately mimicked the artistry of the original.

The stag was alert, with finely tapered antlers. The knotwork within the cross was artfully interwoven, like stone spaghetti. The griffin next to it stood poised on long, talon-like feet. After much discussion, we had chosen the copy made by Nathalie Riol of St Andrews.

But the other five copies will not go to waste. We haven’t yet finalised how they’ll be used, but suggestions include a display at our Edinburgh HQ, use in our learning programmes, and a tactile exhibit at St Vigeans Museum. This would allow visitors, including those with impaired sight, to feel the stone without fear of damaging a historic original.

Meanwhile, people wishing to view Nathalie’s copy should make their way to the abbey! Pre-booking for our brand new exhibition at Arbroath Abbey is available now. 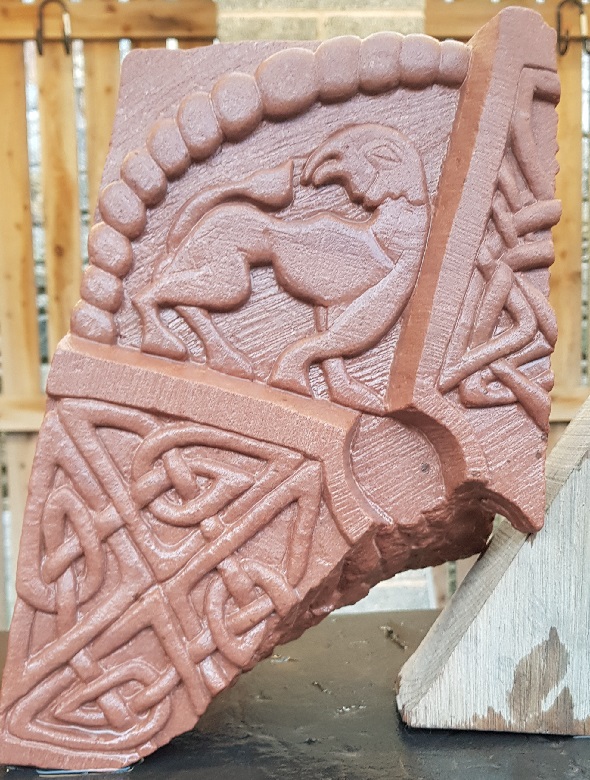