The Homes of Sir Walter Scott

As Scotland marks 250 years since the birth of Walter Scott, we head into the archives and visit the houses, cottages, farms and mansions where he lived and wrote.

2021 marks the 250th anniversary of the birth of Sir Walter Scott. Here at Historic Environment Scotland we’re taking part in the national programme of events and exhibitions to celebrate the anniversary.

In this blog, we’ve used images from the HES Archive to explore the various places that Sir Walter Scott called home. 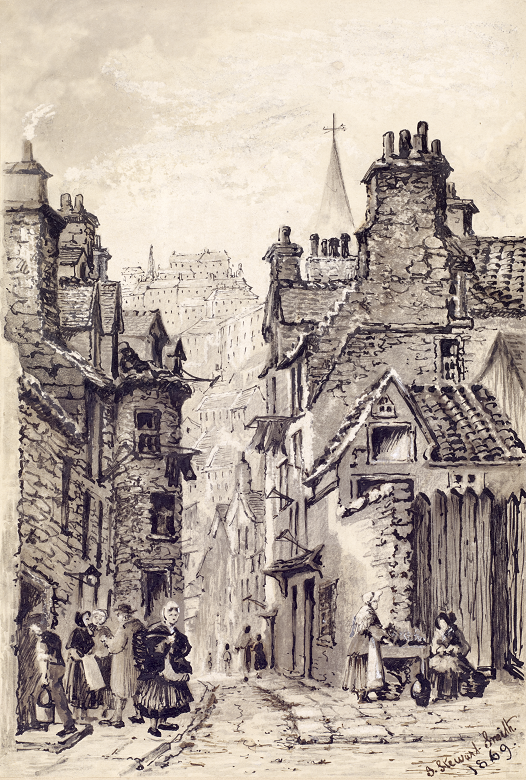 Sir Walter Scott (1771 – 1832) is one of Scotland’s most well-known authors. His life and work had a huge impact on literature, architecture, and the perception of the past in Scotland. It all began on 15 August 1771, when he was born in a tenement in College Wynd, Edinburgh.

As a youngster, Walter contracted polio, so his family decided that he should exchange the atmosphere of “Auld Reekie” for the fresh air of the countryside. In 1773, Scott was sent to live at Sandyknowe, the Roxburghshire farm owned by his paternal grandparents. 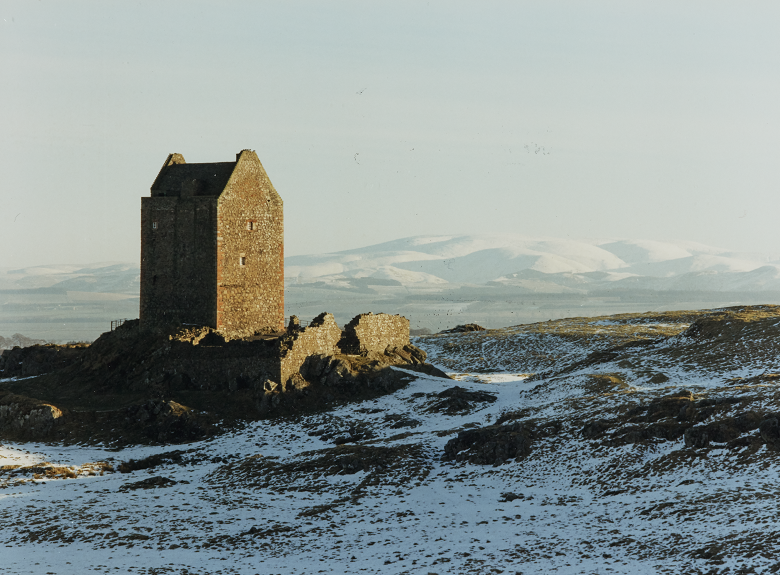 A snowy day at Smailholm in March 1991 (view on Canmore)

While at Sandyknowe, Scott’s relatives entertained him with songs and stories from Borders history. When he was well enough to explore the local countryside, Scott was inspired by the nearby remains of Smailholm Tower, the castle that his ancestors had lived in.

In 1778 Scott returned to Edinburgh to live with his family, who had now moved to a fashionable house at 25 George Square. During this time Scott attended the Royal High School, until his health worsened. Once again, in 1783, he was sent out of the city.

Instead of returning to Sandyknowe, Scott went to live with his aunt Jenny at her cottage in Kelso. He continued his education at the local grammar school. This cottage later became part of a larger house called Waverley Lodge. Like the train station, it was named in honour of Scott’s most famous novel. 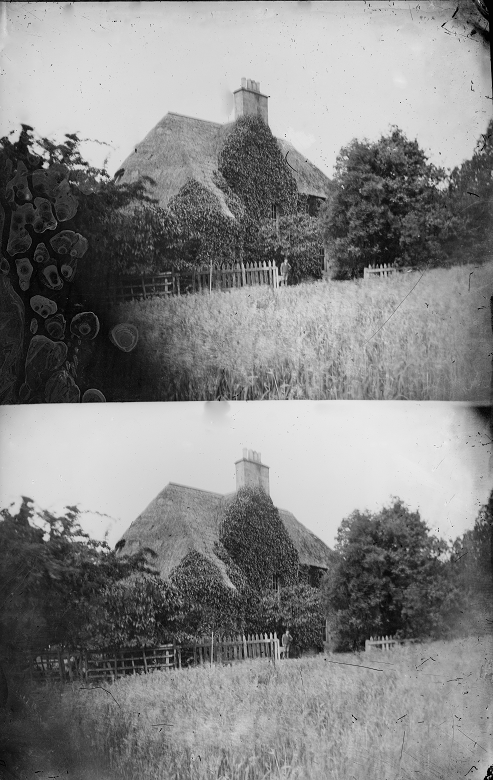 A stereoscopic photograph of Barony House, Lasswade, where Scott lived from 1797 to 1804. This photo was taken in 1860, five years before alterations were made to the property (view on Canmore)

In the autumn of 1783, Scott returned again to Edinburgh. He studied at the University of Edinburgh, and qualified as an Advocate in 1792. Scott spent the next few years practising law in Edinburgh while making trips to the Borders to collect material for what would eventually become his first ‘best seller’ – Minstrelsy of the Scottish Borders.

It was while visiting Gilsland Spa on the English side of the border, that Scott met Charlotte Charpentier. In December of 1797 – the same year they had met – Walter and Charlotte were married at Carlisle Cathedral.

The Scotts’ first home in Edinburgh was a property they rented at 50 George Street. In 1798, they moved to 10 Castle Street, then to 39 Castle Street in 1801. No. 39 would be their Edinburgh home until 1826, a year which brought financial and emotional catastrophe to the Scott household.

Edinburgh was only the Scott home during winter. From 1798 until 1804, Walter and Charlotte’s summer residence was Lasswade Cottage (now Barony House), not far from Edinburgh.

During this time, both volumes of Minstrelsy of the Scottish Borders were published. This was a collection of ballads and songs about the Border Reivers and Borders history which had been gathered by Scott. The work would be translated into multiple languages. It was while at Lasswade that the Scotts were visited by William and Dorothy Wordsworth.

Ashiestiel: Scott the Sherriff and the Poet 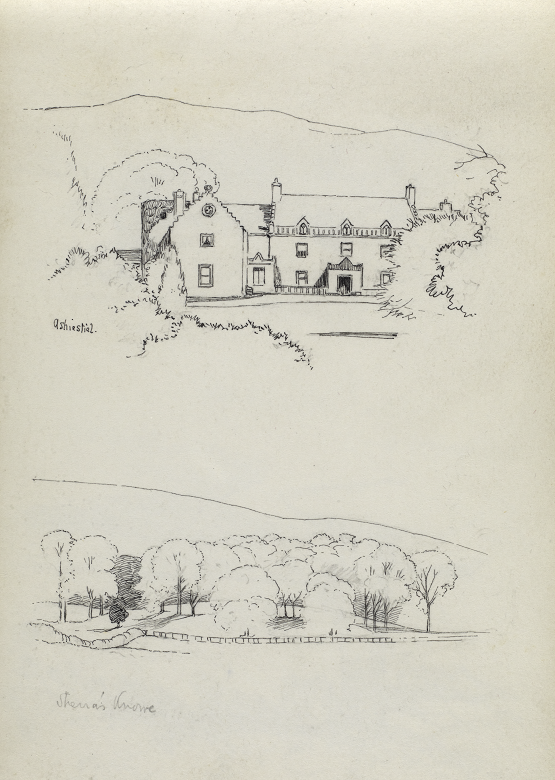 These sketches of Ashiesteel House and Skena’s Knowe forest by unknown artist, date from between 1885 and 1893 (view on Canmore)

As well as starting his career as a writer, Scott also continued to practise law. In 1799 he was appointed Sherriff Depute for Selkirkshire.

Scott’s new role eventually meant that he and his family needed to find a home in Selkirkshire, so in 1804 the Scotts left Lasswade, and took out a lease on Ashiestiel House, situated beside the River Tweed between Innerleithen and Galashiels.

It was during this period that Scott became famous as a poet. His three hugely popular epic poems, The Lay of the Last Minstrel, Marmion and The Lady of the Lake were all published while leasing Ashiestiel.

In 1811 the lease on Ashiestiel expired, and Scott bought a farm with the intention of expanding the property into a home for his family. The farm was called Cartleyhole, but Scott would eventually change its name to Abbotsford. 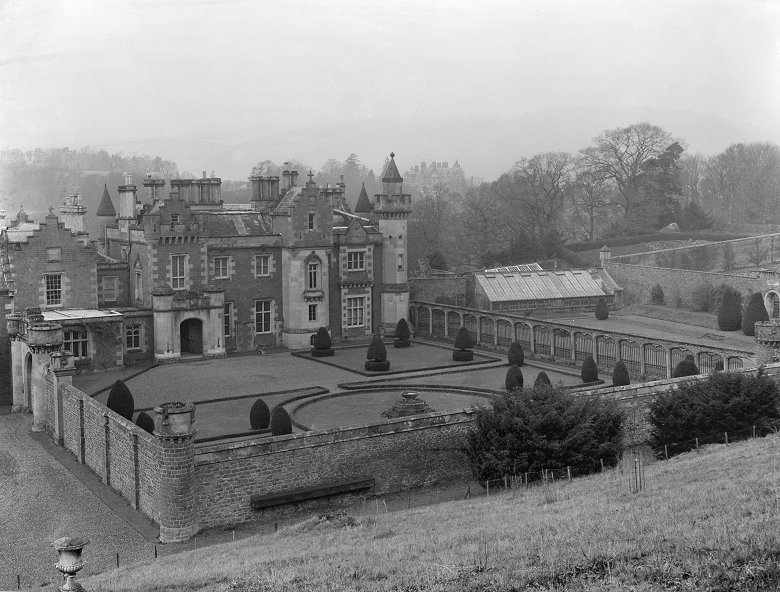 The years that Scott spent at Abbotsford saw the beginning of his career as a novelist. His first novel, Waverley, was published in 1814. Waverley was an instant success, and was followed by bestselling works like Rob Roy and Ivanhoe.

Between 1814 and 1826 at least one new Walter Scott novel was published each year. The resulting fortune and borrowing power allowed Scott to expand Abbotsford from farmhouse to mansion.

In 1826, a financial crash brought ruin for Scott compounded in the same year with the death of his wife, Charlotte. Scott was able to stay at Abbotsford for the remaining years of his life. He wrote constantly, partially in order to pay off the debts he had taken on to fund the building of his country house. In 1832 Scott died at Abbotsford, and was buried at Dryburgh Abbey. 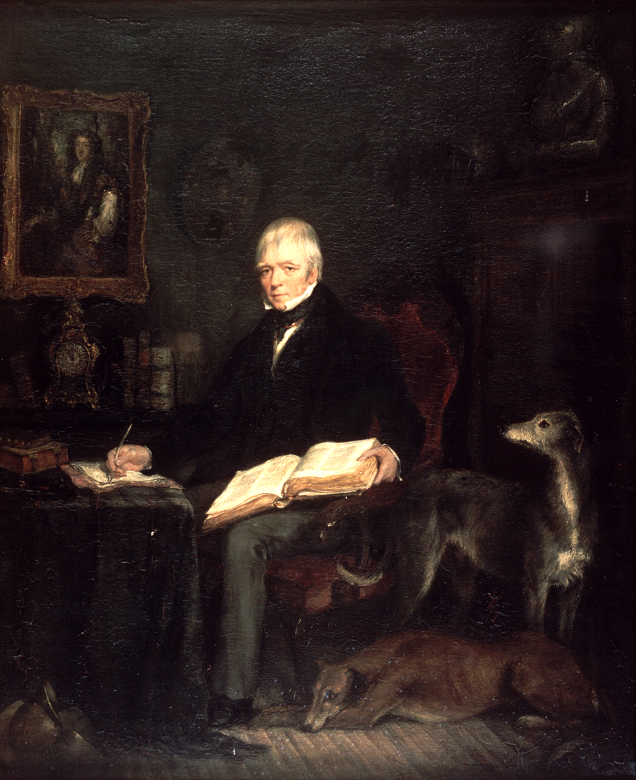 250 years after his birth, Sir Walter Scott continues to exert an influence.

Although his novels are not as popular as they were when first published, they continue to be read, studied, and adapted for screen. Scott’s romantic version of Scotland and Scottish history still looms large in the popular imagination in Scotland and around the world.

The castle that Scott built for himself at Abbotsford inspired architects and monarchs, and remains a popular visitor attraction. As Scott wrote in his journal:

it pleases a fantastic person in the style and manner of its architecture and decoration”.

Join in the celebrations for Sir Walter Scott’s 250th Birthday by visiting our online exhibition. If you’d like to see more images of historic buildings across Scotland, you can head to Canmore and delve into  Historic Environment Scotland archives.