Built on bones: the story of St Oran

Could the history of Iona include human sacrifice? We explore the dark myth of St Oran.

Are you in the mood for a spine-tingling tale from one of the most holy sites in Scotland? Beware! If you read on, the story of St Oran might change your opinion of Iona forever.

The tranquil isle of Iona is well known for the monastery which was founded there by St Columba in 563. Over the centuries, this tiny island beside Mull became an internationally renowned centre of spirituality, learning and art, and has been a vibrant centre of Christian worship ever since. 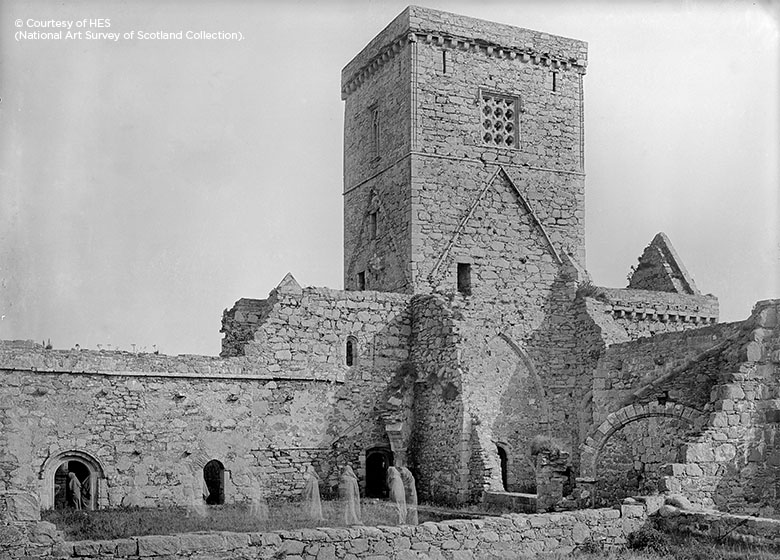 This photo from around 1900 was probably staged using a double exposure effect to create “ghostly” monks. Zoom in for a closer look on Canmore.

But did you know there is a brutal legend associated with the dawn of this community? Indeed, it would not seem out of place in a story by Edgar Allan Poe…

Let’s travel back in time to May 563AD. St Columba has just arrived on Iona with 12 companions. It is said that the 13 men had travelled from Ireland after a disagreement with another saint – St Finnan. It seems that Columba and Finnan quarrelled about a copied manuscript. The dispute escalated and led to a fierce battle with loss of life. 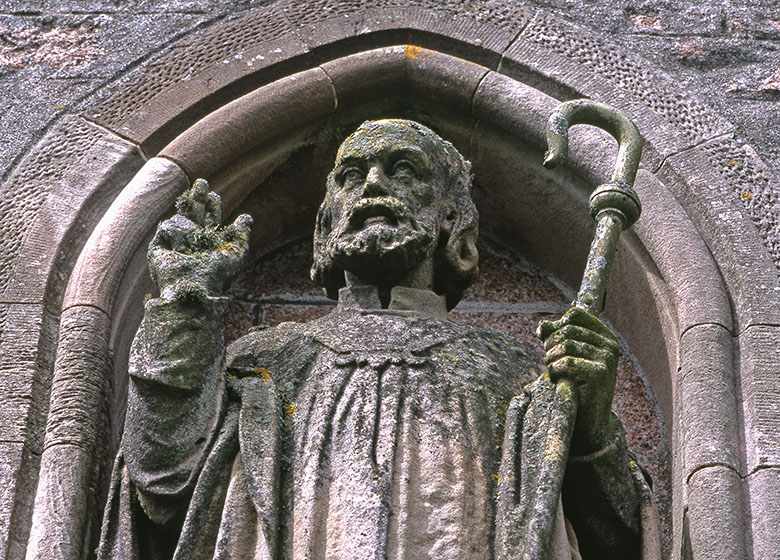 A statue of St Columba on the exterior of the Bishop’s House on Iona.

Among the 13 men who left Ireland with St Columba was St Oran (Odhrán). He was a very influential figure in County Tipperary, where he founded a church in 520AD. He is variously known as St Oran or St Odran, which causes a bit of confusion! We’ve used St Oran for most of this blog, but used St Odran when it appears that way in quotes.

Over time, the folklore around the founding of the religious community on Iona has grown and developed, with new generations adding to the story.

Today, one popular version of the story tells how the missionaries on Iona were working to build the first chapel on the island. Each day, the builders would make good progress, but by the next morning they were dismayed to discover that the building was in ruins. 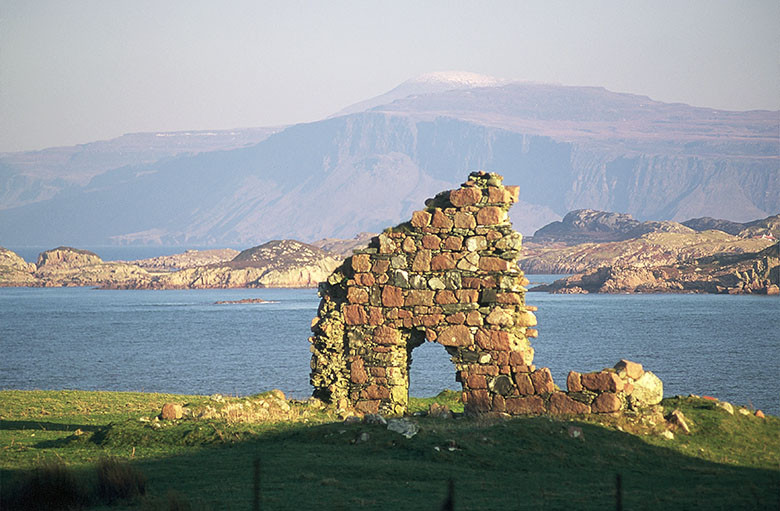 After some time, St Columba received a “divine intimation” that one of the monks must be buried alive in the foundations of the chapel order to secure the building.

In 1900, the Scottish writer William Sharp (under the pseudonym Fiona Macleod) explained that in the earliest known telling of the tale:

“Colum Cille said to his people: ‘It is well for us that our roots should go underground here’; and he said to them, ‘It is permitted to you that some one of you go under the earth of this island to consecrate it.’ Odran rose up readily, and thus he said: ‘If thou wouldst accept me,’ he said, “I am ready for that.’…Odran then went to heaven.”

The act of sacrificing a life to secure foundations is an ancient tradition. Indeed, it’s one that can be found in the Old Testament.

This Old Testament example isn’t a literal entombment. It refers to an earlier curse:

Joshua laid an oath on them at that time, saying, “Cursed before the Lord be the man who rises up and rebuilds this city, Jericho. At the cost of his first born shall he lay its foundation, and at the cost of his youngest son shall he set up its gates.”

Although he knew of the curse, Hiel defied God and rebuilt Jericho. An example of a father knowingly sacrificing the lives of his sons to raise a city.

Returning to the scene

If burying one of your friends alive under a building wasn’t quite traumatic enough, the legend goes on to reveal that three days after Oran was entombed alive, Columba returned to the site.

“Colum opened the grave, to look once more on the face of the dead brother, when to the amazed fear of the monks and the bitter anger of the abbot himself, Oran opened his eyes and exclaimed, “There is no such great wonder in death, nor is Hell what it has been described.” 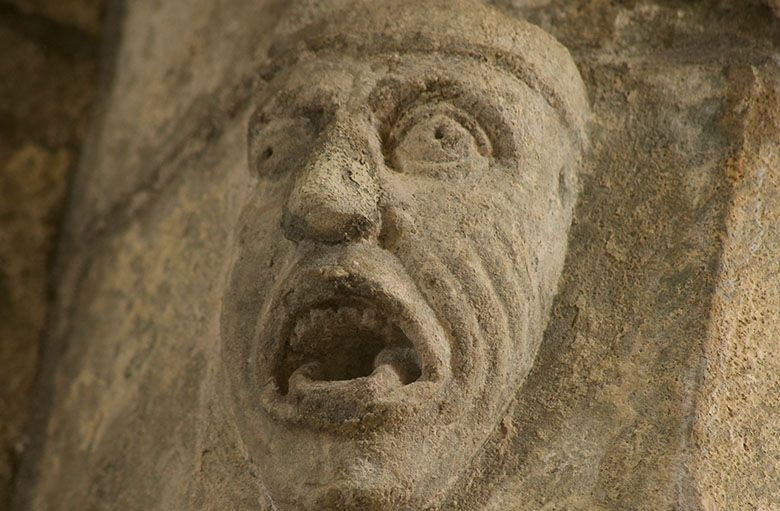 A detail of a man’s face carved into the west crossing-arch in the choir at Iona Abbey. There’s no suggestion this is St Oran, but it seems a very accurate representation of fear and horror.

Poor Oran, who had presumably now lost his faith and belief that his sacrifice would achieve what was intended, was hastily reburied, with clods of earth silencing him forever.

What do we think about the truth of this tale?

Well, in an account of St Columba’s life written by Adomnán (the ninth Abbot of Iona) around 100 years after Columba’s death, this legend receives no support. Oran or Odran’s name does not appear in the earliest list of Columba’s companions. The earliest sources still surviving that link Oran to Iona are from the 11th century or later.

However, some later scholars have argued that perhaps Oran was written out of Iona’s history because of his heresy. 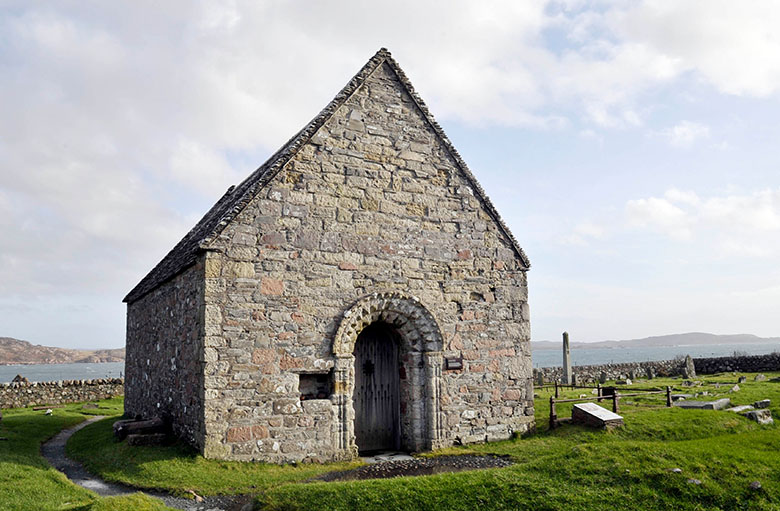 St Oran’s Chapel on Iona is the oldest visible structure on Iona today. However, it was built at least 600 years after the time of St Columba and St Oran.

The St Oran’s Chapel that stands on Iona now dates from about the third quarter of the 12th century. It could well have been built on top of a site that was a little older. However, we have no evidence for a building on that site as old as the 6th century. Although it should be noted that we do have evidence of a wooden hut dating back 1,500 years on Iona.

What do you make of this legend? We’d love to hear your thoughts.

You can explore Iona virtually.