Andrew Burnet from our Interpretation Team takes a behind-the-scenes look at our work to add interpretation to sites affected by our high level masonry inspections.

We know it’s not pretty: your favourite castle or abbey swathed in steel fencing. It’s doing an important job, keeping our visitors and staff safe, but attractive it isn’t.

So when our High-Level Masonry (HLM) project was launched, leading to access restrictions at 70 of our 336 sites, we knew we had to do something to reduce the impact on visitors’ enjoyment. At the same time, we hoped we could improve the appearance of the fencing.

Read on to find out how we responded to this momentous challenge, and discover just some of what you’ll now see – and hear – when you visit our restricted sites.

Getting started with an all out of-fence

After discussing the situation with our Monument Managers, we identified three main needs:

To explain what work is being carried out, why and how.

The big question, of course, was ‘How long will this take?’ Unfortunately that’s one we can’t answer until we’ve completed a detailed survey at each site and assessed what repairs are needed. What we could do was explain why we couldn’t answer it. 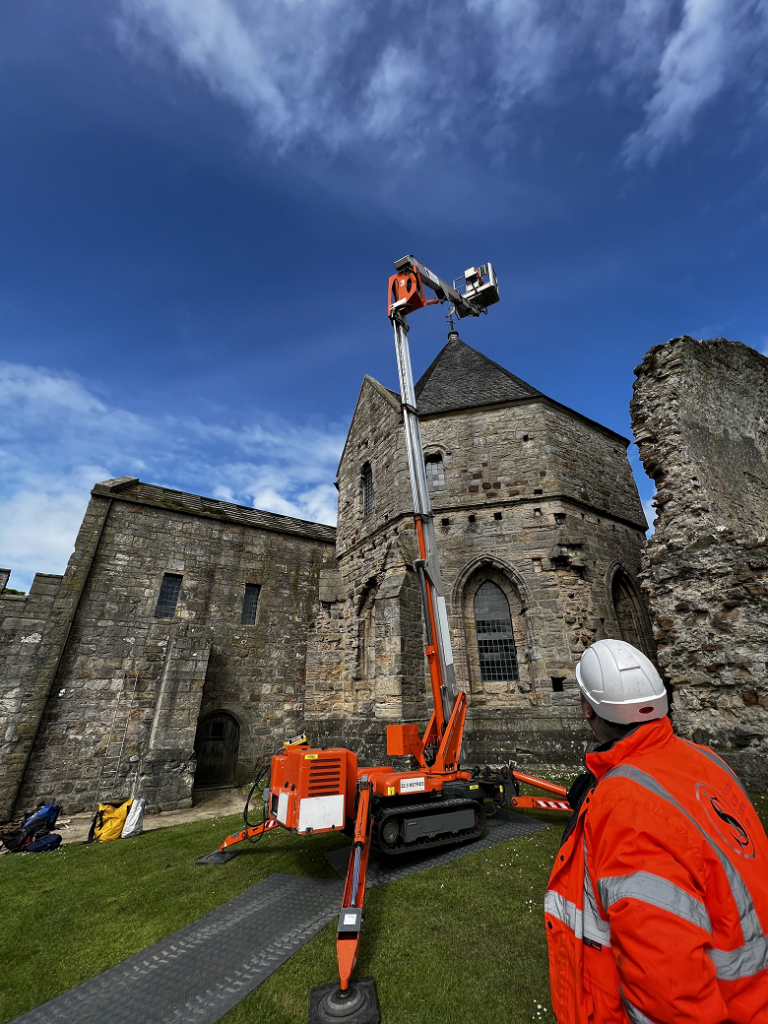 One of our inspections teams at Inchcolm Abbey using a specialist access platform to survey the high level masonry.

To provide some kind of access to spaces and stories that visitors can’t reach.

If there are areas of a site you can’t get to, we’ve tried to provide remote access. This could be in the form of photos, illustrations, film footage or animated 3D scans. In some cases, we were able to reuse existing graphic panels, relocated outside the restricted zones. We always like to reuse where possible. 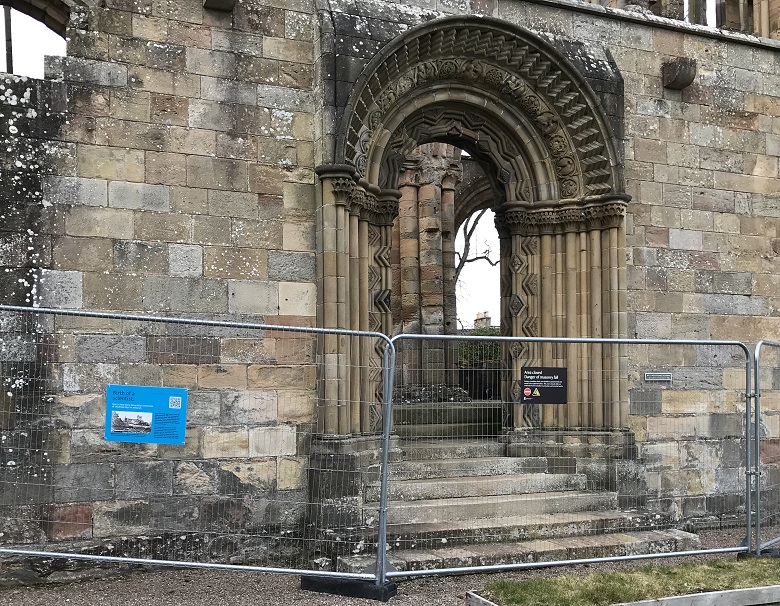 We’ve increased our supply of outdoor games and activities for families. Also, at selected sites, we’re offering a range of audio-visual content – mostly accessed via QR codes on visitors’ own devices. 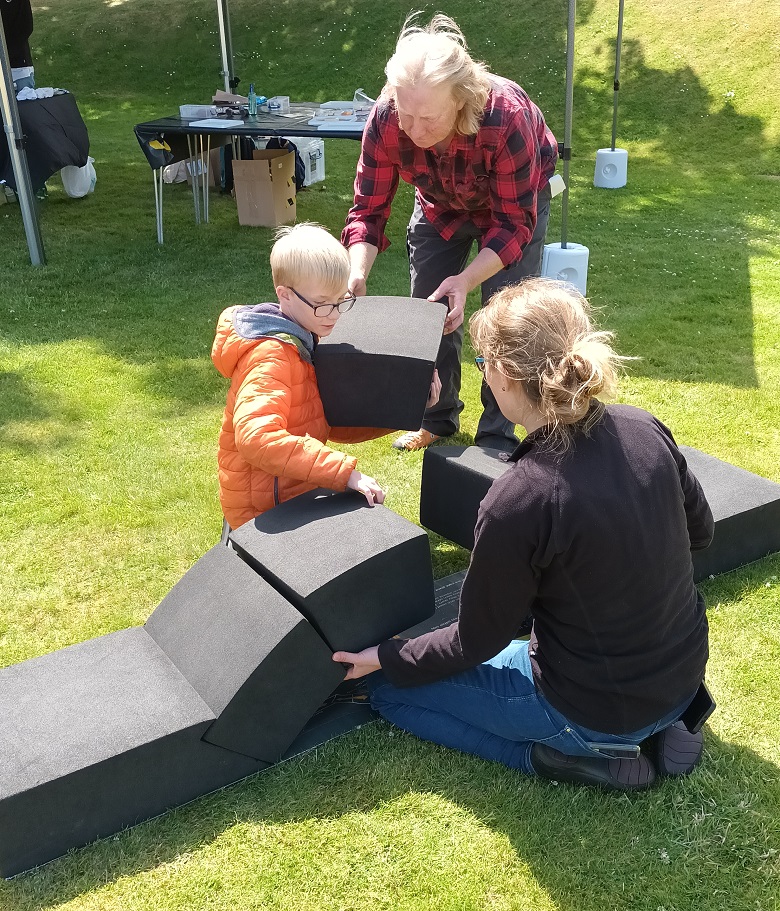 Our Master Builders event at St Andrews Castle gave visitors the opportunity to test out their skills as a medieval mason.

It made sense to use the fencing itself to carry most of our new interpretative signage. Hopefully, this would make it a bit prettier. But also, this temporary solution meant we wouldn’t need to get special permission to carry out work at protected monuments. That’s always a key consideration when we’re installing interpretive panels at our properties.

Blowing in the wind

You’ve probably seen large-scale printed mesh decorating other buildings and historic sites where scaffolding or fencing is in place. We quickly saw that this would lend itself to our purposes. 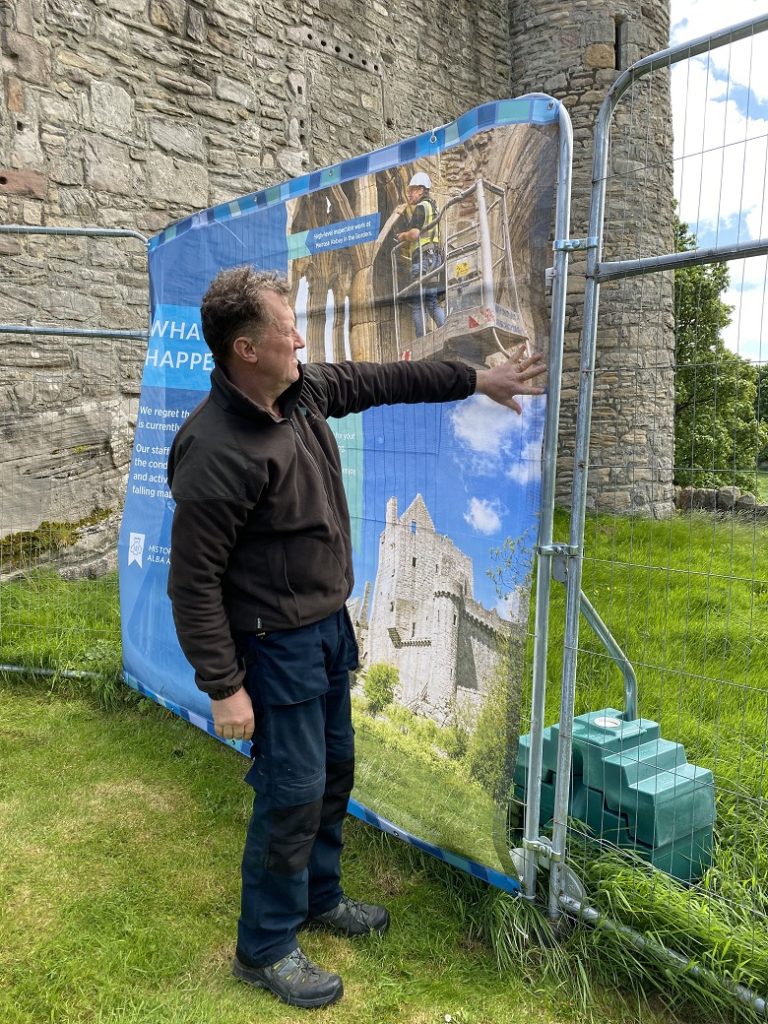 District Architect Clive Cruickshank helping us assess the wind resistance of a mesh at Craigmillar Castle.

But attaching large mesh sheets – or even normal-sized graphic panels – to steel fencing brought a complication. A fencing section on its own offers wind resistance of about 11%. Cover it in mesh and the figure rises to 89%!

So the next task was working out what kind of weighting we needed – and here we had to call on our colleagues in the Civil Engineering team. They produced some terrifyingly complex calculations, taking into account everything we’d already thought of – and wind speed too.

It turned out we needed a LOT of weights. 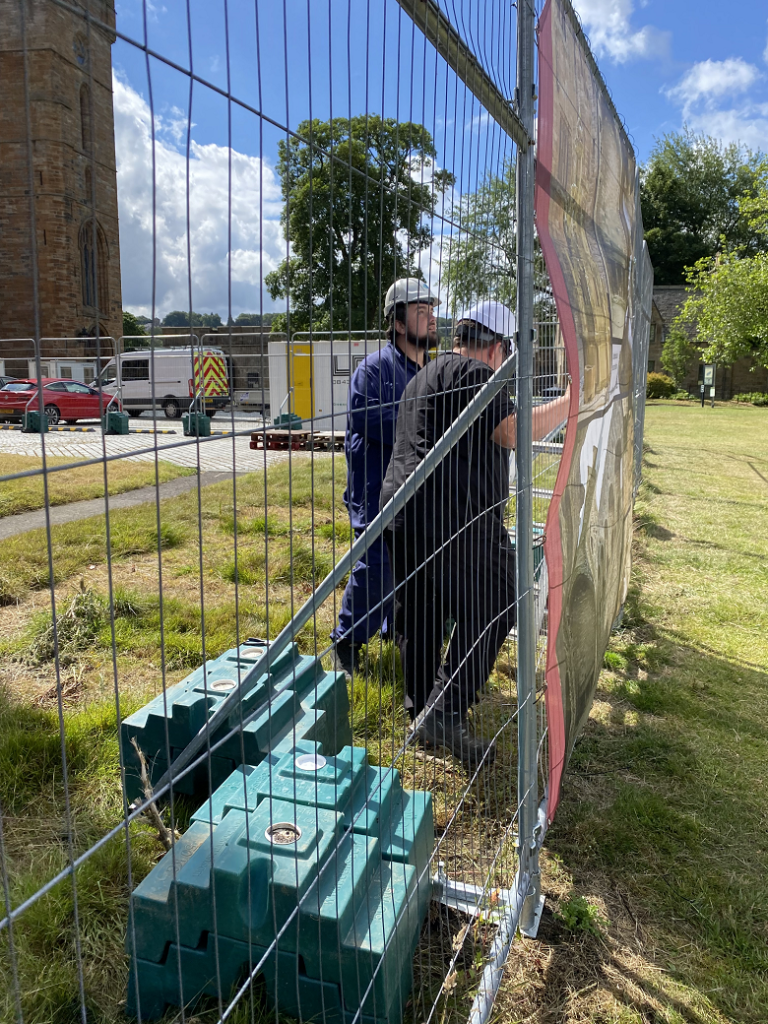 The weights arriving on site at Linlithgow Palace.

The logistics of getting the weights supplied to all the relevant sites fell to our Resource Manager, Johnnie Clark. He’s had our suppliers working at capacity to produce all the weights we need. So much so that in early July their cement pump broke down: not a dilemma that’s often encountered by an Interpretation team. (I’m pleased to report it’s working again now.) 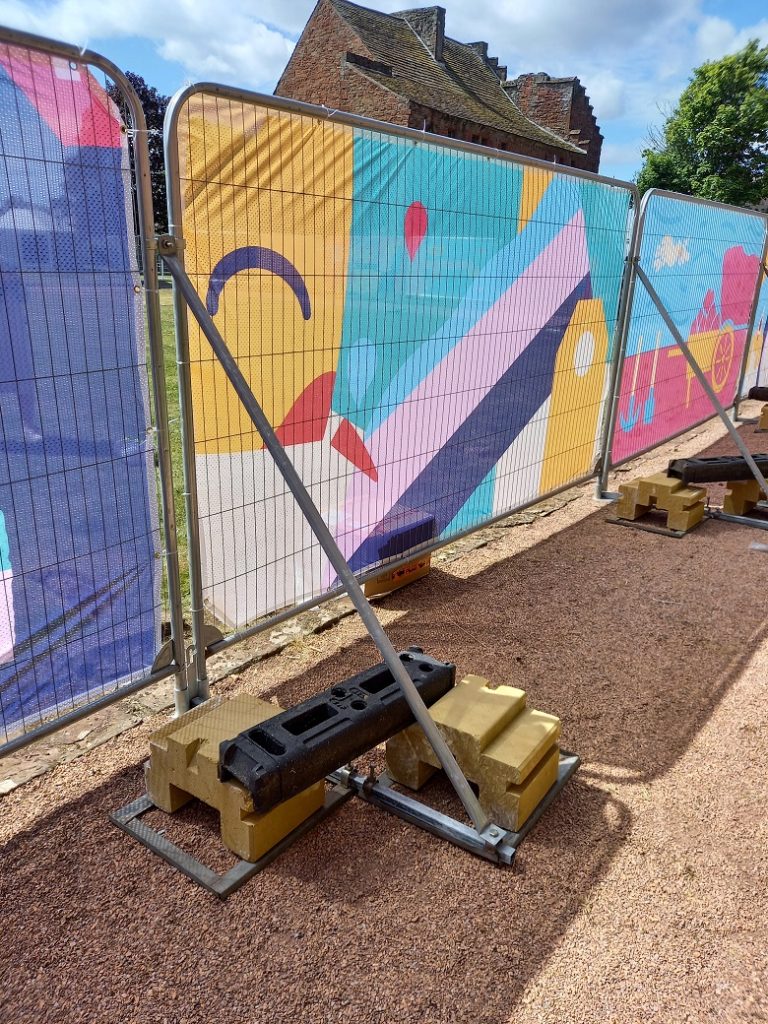 Weights in place at Arbroath Abbey. Here, we worked with the local arts organisation, Hospitalfield, to install an exhibition of artworks printed onto mesh and attached to the fencing.

Meanwhile, we got to work on a panel for all the affected sites, giving basic information about the project. You may have seen this at some of our sites. To give a flavour of how the inspections are being done, we used photographs of a mobile elevating work platform (or MEWP) in use at Melrose Abbey. 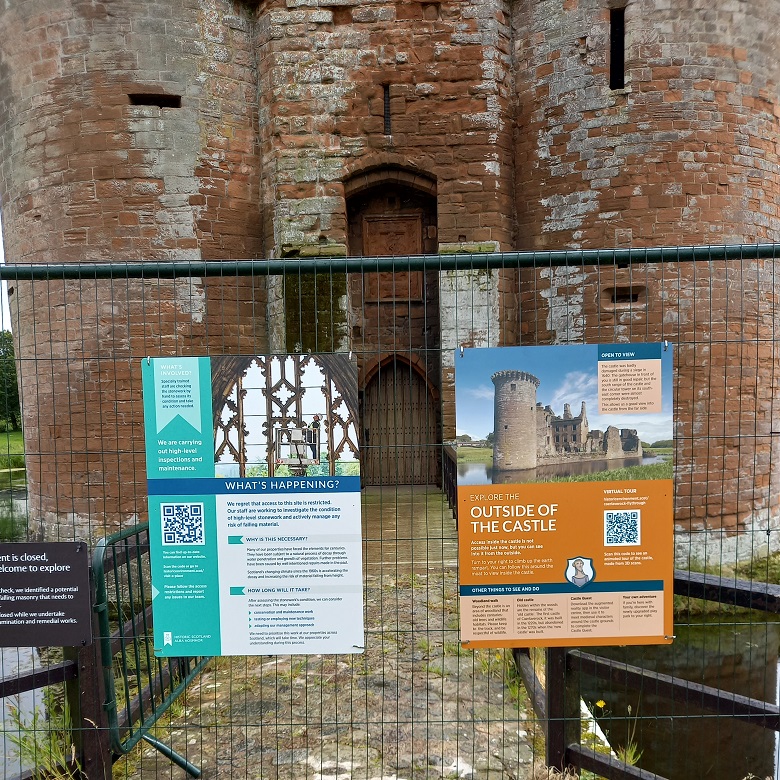 Signage at Caerlaverock Castle provides links to more information on our inspections and to the history of the castle.

We then turned our attention to creating bespoke packages of new interpretation for our priority sites.

At Linlithgow Palace, where the whole building is surrounded by fencing, we displayed large-scale illustrations and photographs. These provide a glimpse of the interiors and showcase the Stewart royalty who established and expanded the Palace. 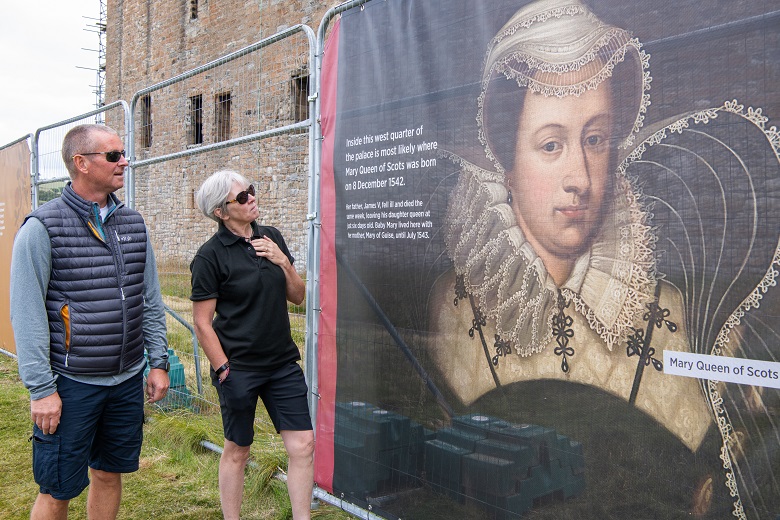 Meanwhile, at Arbroath Abbey, site staff asked us to promote the exhibition, which remains open while access to the monument is restricted. We produced some large banners, as well as a site overview and a banner about the Abbot’s House. 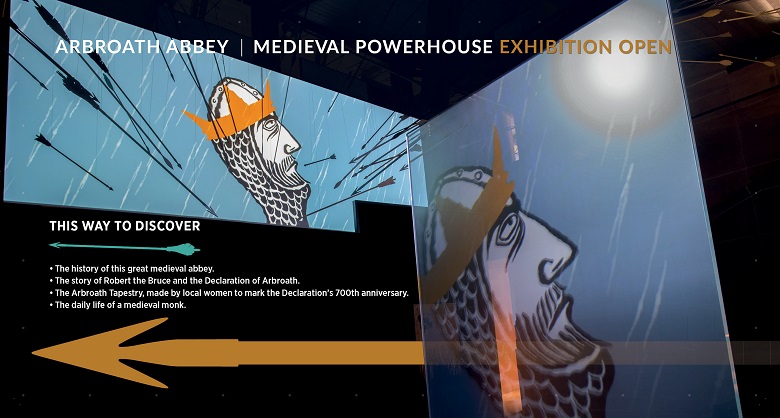 New panels guide visitors to the exhibition at Arbroath Abbey.

At Dumbarton Castle, we used the fencing as a series of canvases to portray the castle’s long history. We took this opportunity to include previously untold stories.  We also produced a film of award-winning local poet Stephen Watt reading his poem, ‘A Romantic’s Ruin’.

At abbeys in the Borders and Dumfries & Galloway, we used characterful illustrations with simple captions at large scale to give a sense of the medieval monastic way of life. 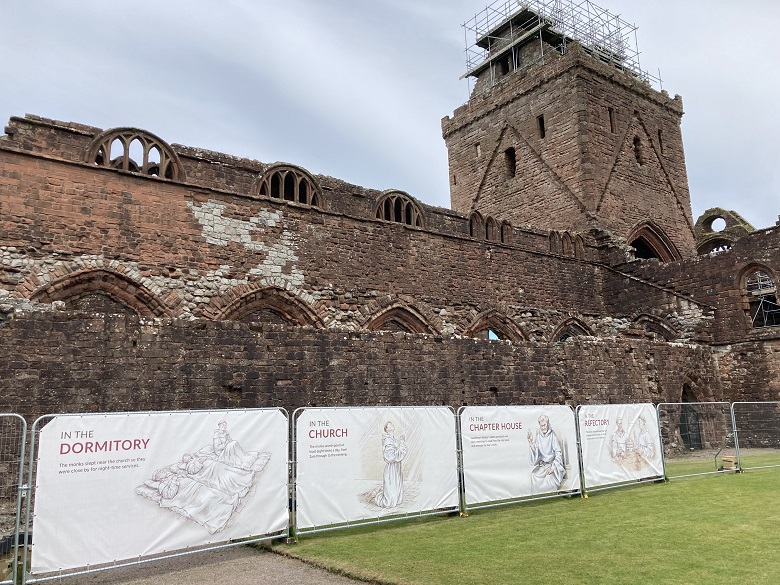 Although you can now visit the cloister at Sweetheart Abbey, there is no access at the rest of the site. Panels tell the story of how the monks would have lived here.

At certain sites, we’ve also added some new digital content. You can access this on your own phone using a QR code (or by keying in the web address).

For Caerlaverock Castle, we worked with our colleagues in the Digital Innovation team to produce a new flythrough video made from 3D scans. A similar film exploring Linlithgow Palace is in development and will be released in the new few weeks. These films don’t just give virtual access to the interiors; they also provide viewpoints that can never normally be reached. Look out for an upcoming blog explaining how we made these.

Our new interpretation has begun appearing at selected restricted-access sites over the past few weeks. So far we’ve been getting great feedback.

We’re now reviewing this phase of work, and planning the next stage. Some of our plans have already been shelved, for the best possible reason. Sites such as Doune Castle and Inchcolm Abbey have been cleared to reopen, with minimal restrictions in place.

At Doune, there’s the added bonus of the new footbridge. This award-winning structure links the castle with the village, the old mill and a network of footpaths and interpretation boards. 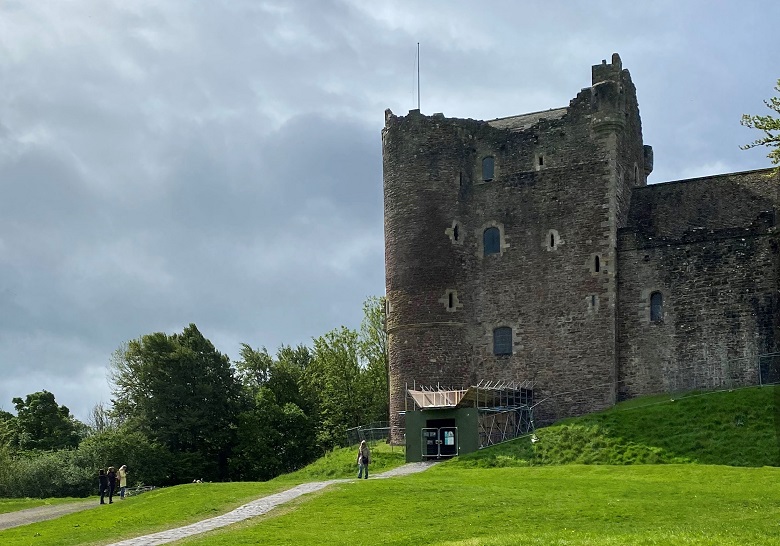 A temporary ‘crash deck’ at Doune Castle allows visitors safe access to the courtyard and interiors.

In the meantime, we hope you’ll agree that – while our sites will look better when all the fencing comes down – the addition of colourful and informative interpretation is a big improvement.

Learn more about our inspections programme

Go behind-the-scenes with Craig Mearns, our Director of Operations, to find out more about our High Level Masonry project.

Head to our inspections page for the latest updates on this massive challenge.