This weekend Edinburgh’s Mercat Cross will play an important role in the accession of King Charles III. Uncover its history on our blog.

If you’ve ever walked up Edinburgh’s Royal Mile, you’re bound to have seen the Mercat Cross. This weekend, this historically significant site will host news of the new monarch, King Charles III. This is known as the Proclamation of Accession.

The historic landmark stands outside St Giles’ Cathedral, at the heart of Edinburgh’s Old Town, a UNESCO World Heritage site.

This Category A listed feature was primarily a focus for trade, but at key points in history it is used for ceremonial events, public proclamations and civic announcements.

This Sunday 11 September, the Old Town in Edinburgh will be a focus of activity. A 21-gun salute will take place at Edinburgh Castle, which will herald accession proclamations from the Mercat Cross at 12 noon and Edinburgh Castle Esplanade shortly after. 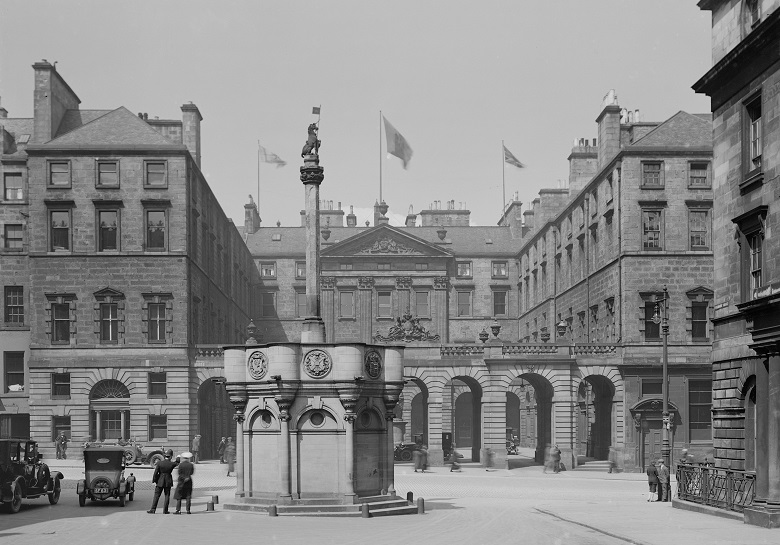 Caption: For hundreds of years, a Mercat Cross has graced the High Street in Edinburgh. The one we know today dates to the late 1800s. Take a closer look at this image from the 1930s over on Canmore. © Courtesy of HES (B C Clayton Collection)

History of the cross

The history of Edinburgh’s Mercat Cross is complex. It was first mentioned in a charter of 1365 and it was rebuilt in 1617 to a design by master masons John Tailefer and John Mylne. The position of the 1617 cross is now marked out in cobblestones on the Royal Mile. 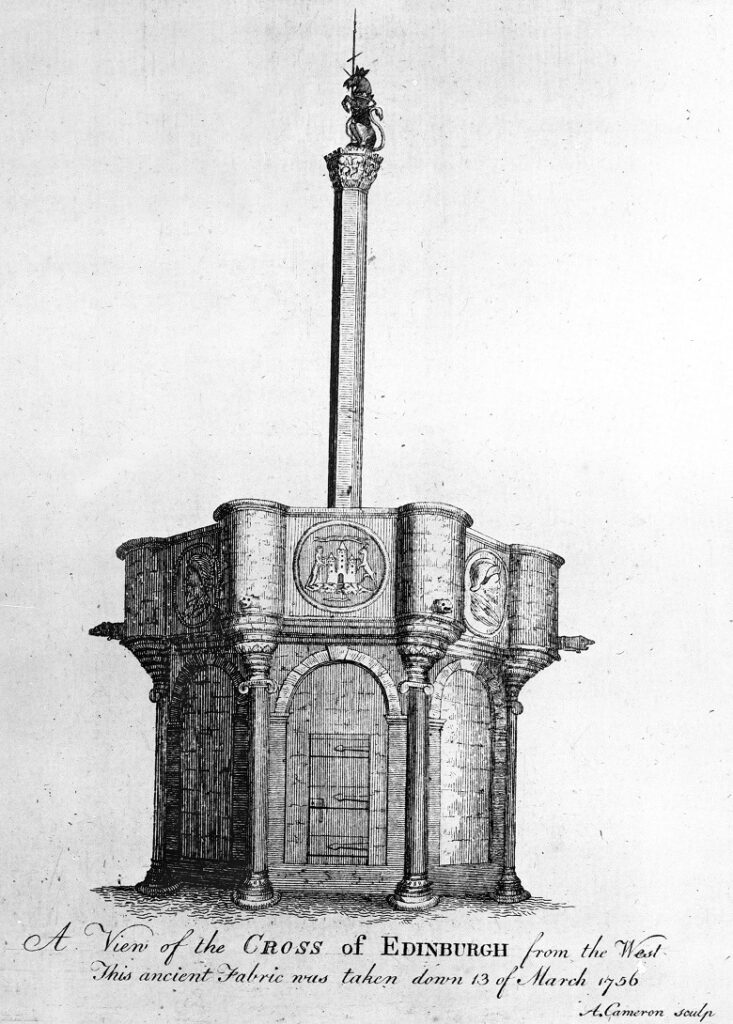 Elements from the 17th century Mercat Cross still exist in the Mercat Cross we know today. Take a closer look on Canmore. © Courtesy of HES.

It had an octagonal base bearing eight medallions, and incorporated the shaft and capital of an earlier cross. The door led to a platform from where Royal proclamations were made. It was demolished in 1756 and parts of ended up in Drum House in Gilmerton. Five of the eight plaques eventually made their way to Abbotsford House in the Borders after they were purchased by Sir Walter Scott to  adorn his garden walls.

In 1866, parts of the 1617 cross were retrieved from Drum House. This included the shaft, which stands nearly 14 feet tall. However, the unicorn on top of the column is thought to date from 1869, and is based on a description of an earlier unicorn. This spectacular feature once again took pride of place atop the Mercat Cross, high above the Royal Mile.

Caption: The 19th century reconstruction of the Mercat Cross was a little more ornate. Head to Canmore to zoom in on the detail. © Courtesy of HES.

In 1885 a new octagonal base was built underneath the cross. This was paid for by MP William Gladstone. The Latin inscription above the door was composed by Gladstone and reads:

“This ancient monument, the Cross of Edinburgh, which of old was set apart for public ceremonies, having been utterly destroyed by a misguided hand… and having been avenged as well as lamented, in song alike noble and manful, by that great man Walter Scott, has now, by favour of the Magistrates of the City, been restored by William Ewart Gladstone.”

The cross has witnessed all kinds of announcements over the decades, including news of the end of World War Two and Her Majesty the Queen’s accession to the throne in 1952. 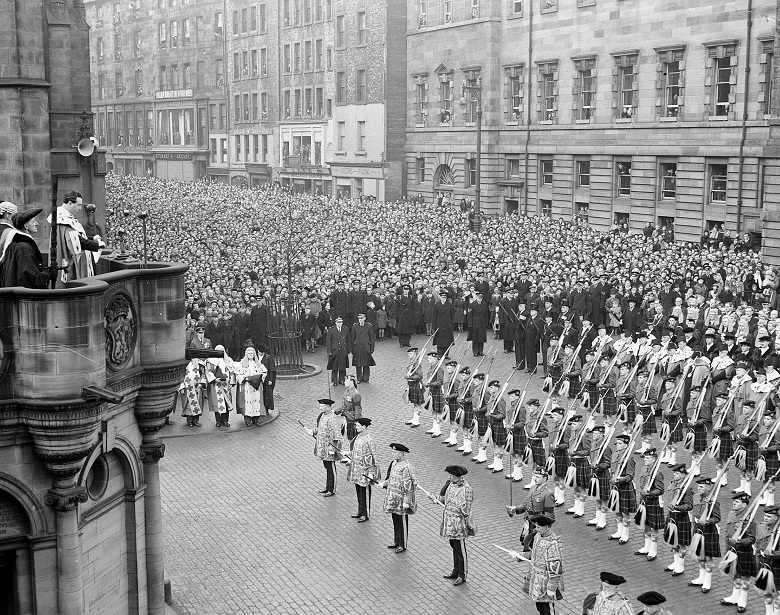 Just like in 1952 for the proclamation of  The Queen’s succession, King Charles III’s accession to the throne will be read from Edinburgh’s Mercat Cross by the Lord Lyon King of Arms.

Heraldic decorations were restored and repainted and the asphalt roof was replaced. Local apprentices also repointed the stonework with a traditional lime-based mortar.