As Her Majesty The Queen lies at rest in St. Giles’ Cathedral, we take a brief look at the history of this national landmark.

On Monday 12 September Her Majesty’s Coffin was borne in Procession from the Palace of Holyroodhouse to St. Giles’ Cathedral. A Service to celebrate the life of The Queen and her connection to Scotland took place. Her coffin will lie at rest in St. Giles’ until Tuesday 13 September. It is anticipated that tens of thousands of people will visit to pay their respects.

The tower of St. Giles’, topped with an ornate crown spire, is an iconic feature of the Edinburgh skyline. We take a brief look at the history of this landmark and the role that it plays in the historic events of the moment.

Lying in Rest with the Crown of Scotland

The Queen will lie in rest in the chancel of St. Giles’. As mourners file past, they will be able to pay their respects at her coffin until 3pm on Tuesday 13 September. 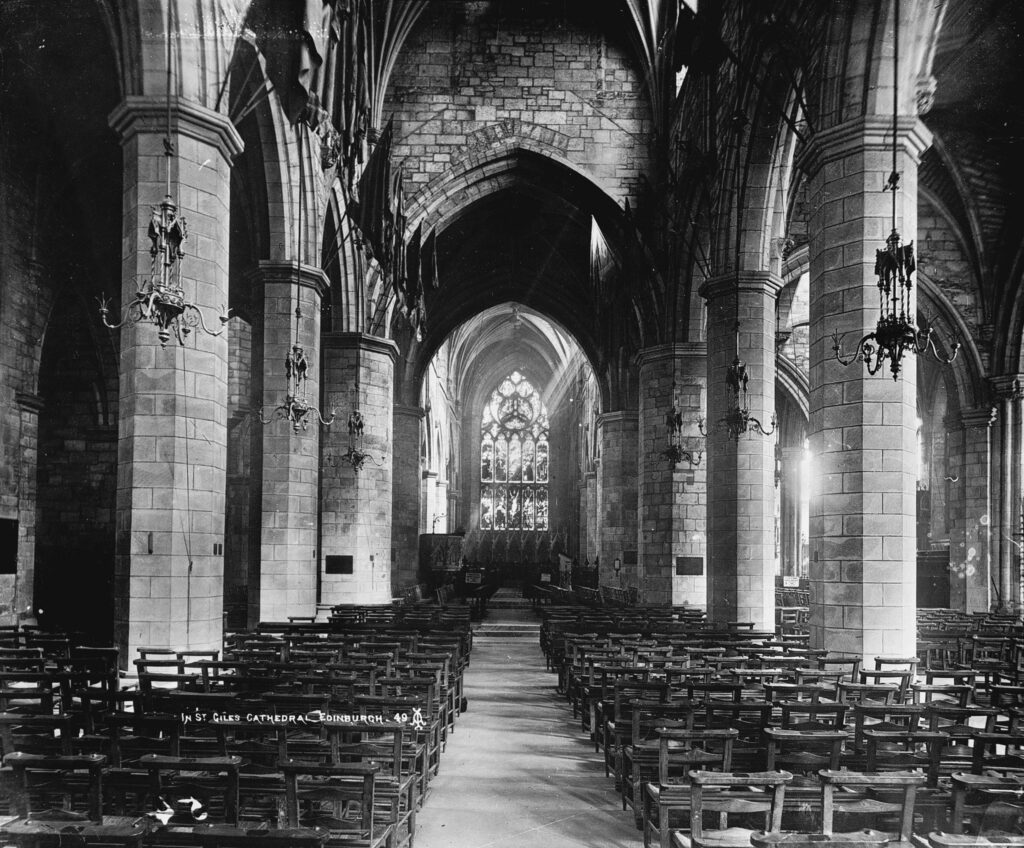 Her Majesty The Queen will lie at rest in the chancel of St. Giles’. This photo, dating to around 1900, shows a shaft of light piercing the chancel area. © Courtesy of HES (Scottish Colorfoto Collection).

Her Majesty the Queen is the first monarch to die in Scotland since James V.

The Crown of Scotland

Over the centuries many pairs of hands have had the privilege of looking after the Honours of Scotland (the Crown, Sword of State and Sceptre). These important artefacts are now within our care. It’s a duty our Collections Team take very seriously.

The current Crown of Scotland was worn for the first time in 1540 by James V at the coronation of his second wife, Mary of Guise, at Holyrood Abbey.  Edinburgh jeweller John Mosman was tasked with remodelling an earlier crown, which dated from at least 1503. Mosman had less than six weeks to complete the task. Its making may have been rushed but since its first ceremonial outing the Crown has seen long service – not far short of 500 years so far. The Honours of Scotland are the oldest Crown jewels in Britain and among the oldest in Europe.

St. Giles’ was founded in 1124 as a small Romanesque church. In the 1300s, St. Giles’ was set on fire twice. Once under the orders of Edward II and later on the orders of Richard II. Much of the Kirk we can see today largely dates from the rebuilding of the 14th century.

Within the span of its long life, it has been a parish church, a collegiate establishment and a cathedral. Although it is now known as St. Giles’ Cathedral to most people, it hasn’t technically been a cathedral since the 17th century. Its official name is the High Kirk of Edinburgh. 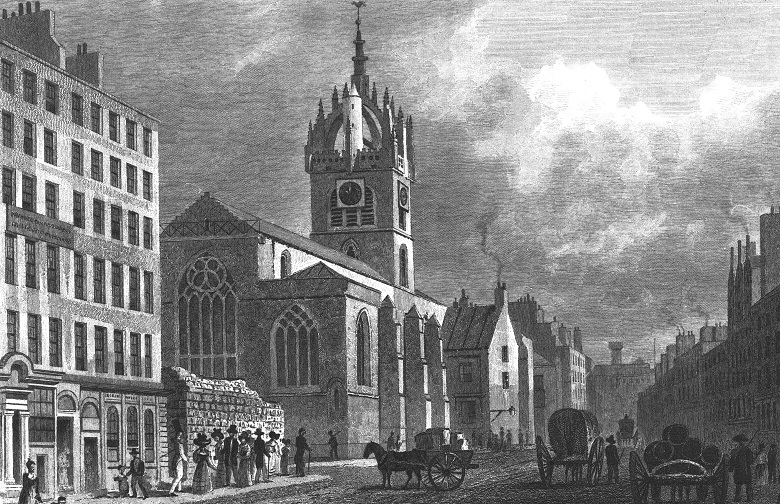 This monumental building is planted below Edinburgh Castle and high above Holyrood. When it was first constructed, it would have overlooked the hollow in which the Nor’ Loch was subsequently formed on one side. On the other, it stood above the valley that was later to become the Cowgate. 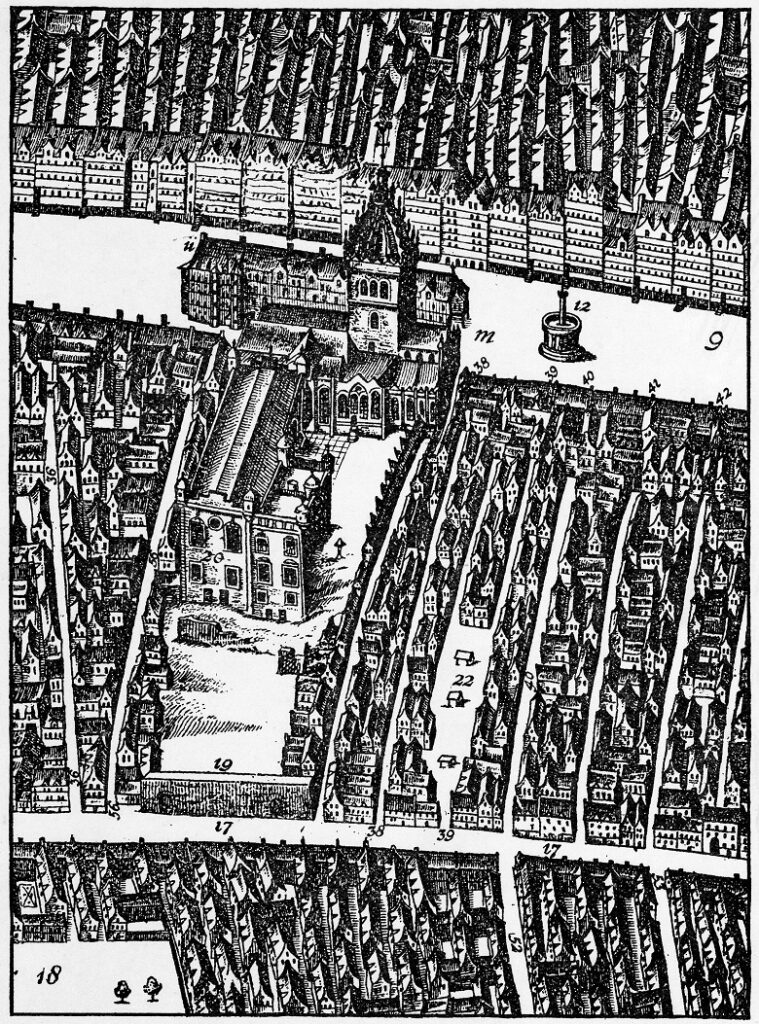 This plan of the High Street shows the layout of the Old Town in 1647. St. Giles dominates the centre of the town, beside Edinburgh Parliament House, which was built in 1639 by James Murray, Master of Works for King Charles I.

The earliest evidence that exists for a church on this site dates to the 12th century. Part of this can still be found within St. Eloi’s Aisle. 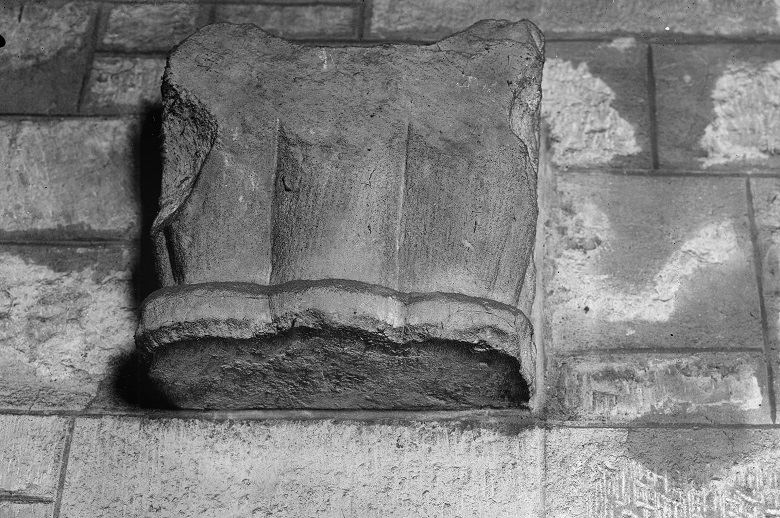 This scalloped capital is the most visible remnant of the early church. © Courtesy of HES.

The High Kirk as we know it today incorporates a range of architectural styles spanning the centuries.

The crown spire was rebuilt by John Mylne in 1648. 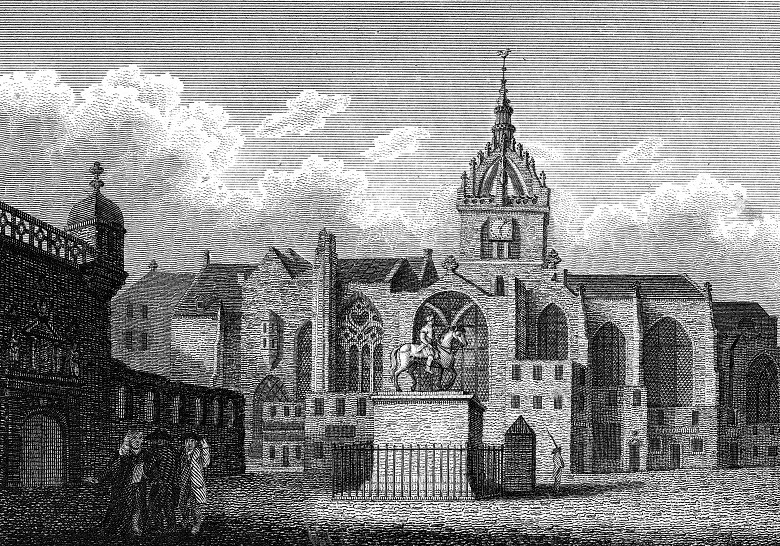 During the 19th century extensive renovations took place. Between 1829-33 the Scottish architect William Burn, one of the pioneers of the Scottish Baronial style, reconstructed and re-faced much of the building we see today. Among the changes he made were the heightening of the arcade of the nave and a clerestory – an additional row of high windows – was added to make it more ‘Cathedral-like’.

Further restoration by William Hay and George Henderson in 1870-83 saw the addition of new North and West doors, a screen in the North transept and a pulpit and font sculpted by John Rhind.

One of the gems of St. Giles’ is the Thistle Chapel. This chapel is the private chapel for the Order of the Thistle, Scotland’s oldest and most senior Order of Chivalry. The Order was founded in the 15th century by James III. The Order is made up of 16 Knights and three Royal Members. The chapel was designed by Robert Lorimer and finished in 1911. 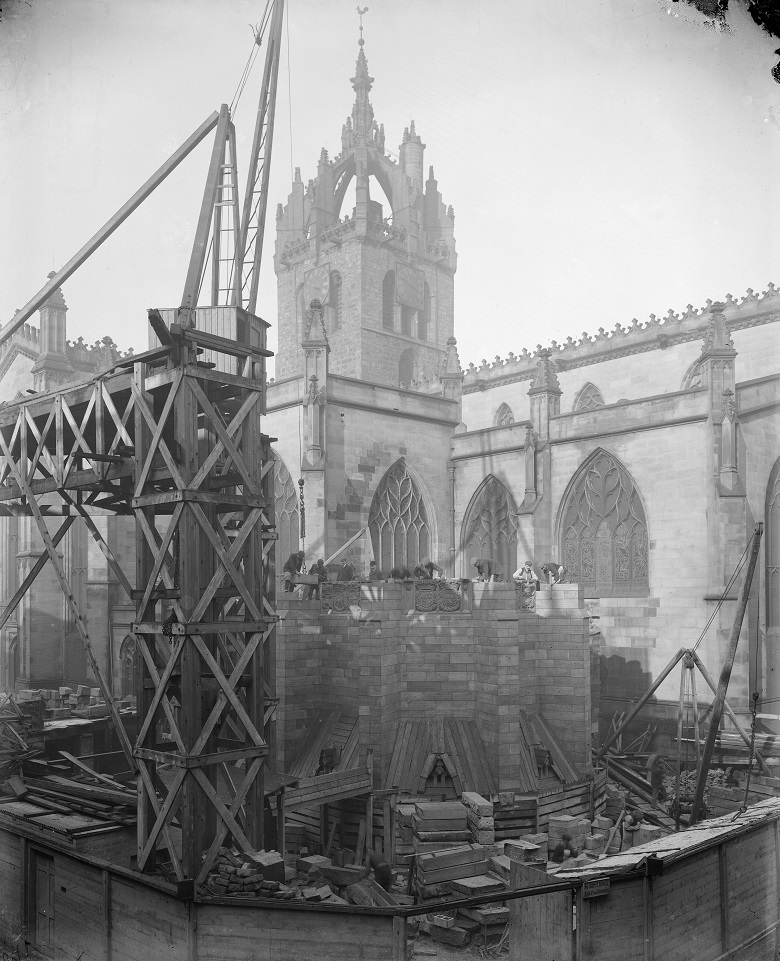 The Thistle Chapel is the most ornate building of its type built in Scotland since the Middle Ages. It contains a wealth of detail, both religious and heraldic. Much of the detail is peculiarly Scottish, including angels playing bagpipes. 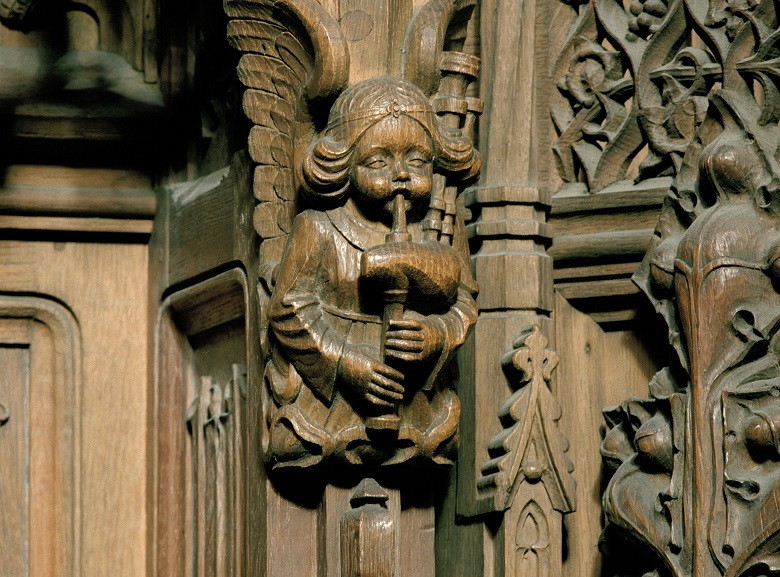 Recently, we supported new research by Dr Coralie Mills, a tree-ring dating specialist who heads up the consultancy Dendrochronicle. Her investigations uncovered some exciting information about the beams used to make the landmark tower of St. Giles’, which supports the crown spire carried on eight flying buttresses. 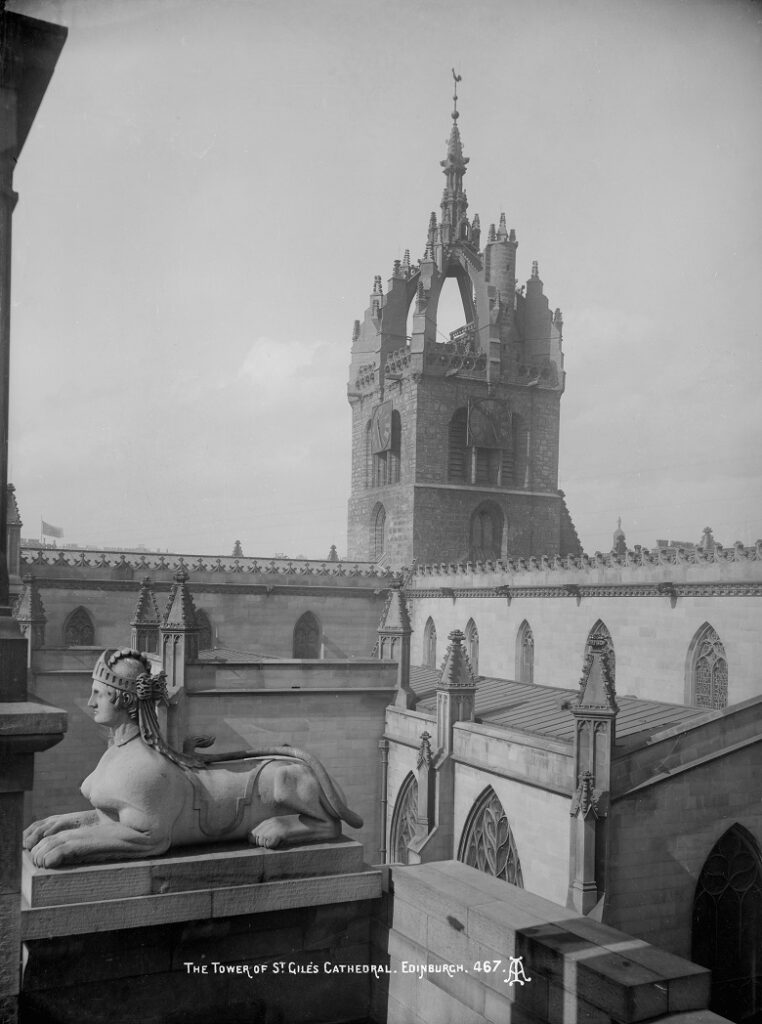 The spire of St. Giles’ viewed from the roof of Supreme Courts © Courtesy of HES (Scottish Colorfoto Collection).

Thanks to her research, we now know that the oak beams were felled in the winters of 1453-54 and 1459-60. The timbers were brought from one of the last remaining extensive reserves of old growth oak in Scotland, the Royal Forest of Darnaway, in Morayshire. The results revealed that several of the trees were over 300 years old when felled.

A Place for Reflection

St. Giles’ is a national landmark at the heart of a UNESCO World Heritage site. Over the centuries it has fostered and witnessed many changes. However, at its heart it is a place of worship and contemplation. A fitting place for mourners to pay their respects to Her Majesty The Queen.