The Campbells: Digging into the history of women in archaeology

Uncover the story of the Campbells – a mother and daughter who investigated Clava Cairns nearly 200 years ago.

Was Mrs Elizabeth Campbell of Kilravock (1783-1861) the first woman archaeologist in Scotland? Well, she might have a claim to the title. Although it is notoriously hard to pin down the ‘first person to …’ undertake any wide ranging, and vaguely defined pursuit like ‘archaeology’.

What we do know is that Elizabeth and her daughter, Thomasina, form a rare mother-daughter investigative duo, recording and publishing at least one prehistoric site in the Georgian era.

Elizabeth was born at Kirkleatham, near Redcar, in 1783. Her parents, Yorkshire politician Sir Charles Turner of Kirkleatham, MP, and her mother, Mary Shuttleworth, died while she was young. Consequently, she was raised by her stepfather, Sir Thomas Gascoigne (1745-1810) on his estate at Parlington, near Leeds. Here Elizabeth witnessed the practical application of Gascoigne’s wide-ranging ‘Enlightened’ interests in history, agricultural improvement and horticulture.

In April 1801, aged just 18 Elizabeth married military officer William H Campbell (c1767-1811), a man in his mid-30s.  He rose to the rank of Lieutenant-Colonel in August 1801, shortly after they were married. As yet, I’ve been unable to find more information on William’s heritage and early life. Their only child, Thomasina Mary Anne Eliza Campbell was born in either 1804, or less probably in 1806.

During the Peninsular Wars, William was constantly on active service with the 31st Regiment in Sicily, Malta, and Spain. He died of fever in Portugal in 1811, leaving behind his young widow and daughter.

A home in the Highlands

By late 1828, Elizabeth was renting Kilravock Castle, near Nairn. It’s unclear what her link to the Highlands was and what brought here there. However, we do know that she took a very pro-active role in managing ‘her’ castle policies and home farm. 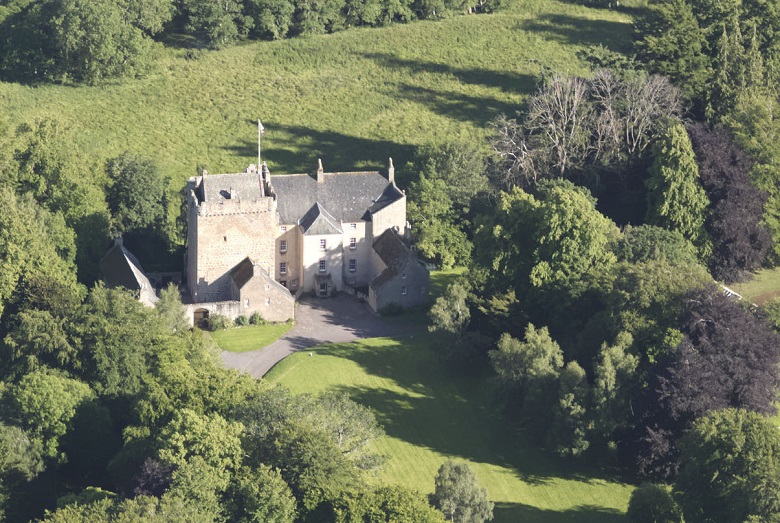 Kilravock Castle is a Category A listed building which dates back to the 1400s. Head over to Canmore to zoom in for more detail and information on Kilravock Castle. © Crown Copyright: HES.

What we know of Elizabeth and Thomasina’s archaeological explorations is thanks to one of their neighbours. Historian, writer and local landowner, Sir Thomas Dick Lauder had a Highland retreat around 14 miles away from the Campbell’s castle.

In July 1830, he published ‘An Account of the Great Floods in Morayshire in 1829 in the Province of Moray and adjoining Districts’. This publication describes the devastation caused by the cataclysmic storms which hit north east Scotland in August 1829. There was mass flooding, huge loss of life, and bridges were swept away. Huge tracts of land in Aberdeenshire, Angus and Banff were under water ‘many miles in extent.’

Intriguingly, Lauder interspersed his account of the tragedy with historical anecdotes, including Campbell’s excavations.

The Clava Cairns, beside the River Nairn outside Inverness, are one of the best known groups of prehistoric tombs in Scotland. There are several clusters of early and late Bronze Age cairns of varying forms, including surrounding stone circles. Over the years, many antiquarian discoveries at the site were the accidental result of building new roads and drainage. Lauder called this ‘the Scottish Stonehenge’. 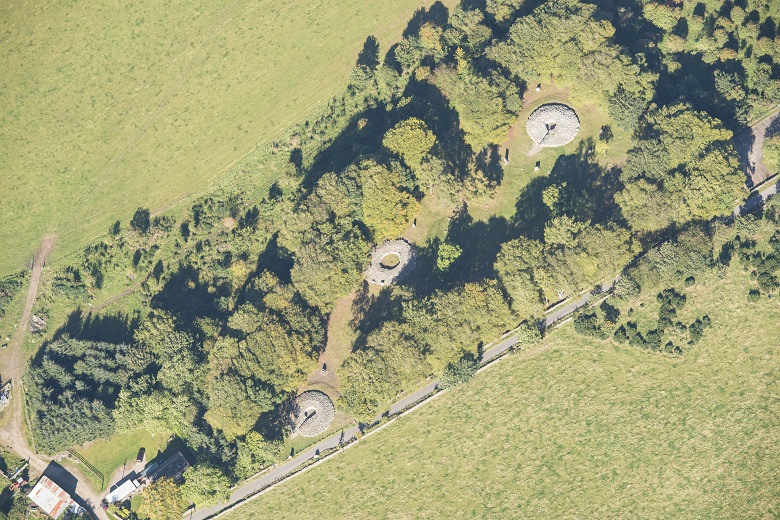 Clava Cairns is one of Scotland’s most evocative prehistoric sites. Take a closer look on Canmore.© Crown Copyright: HES.

Clava belonged to the neighbouring estate of Cantray, but Lauder explicitly states the dig was ‘by direction of Mrs Campbell’. Elizabeth would have required the landlord’s permission to explore it.

The exact dates when Campbell opened the tomb are vague. The summer of 1829 or the spring of 1830 are likely windows of opportunity. This might have been granted quite readily, as both Cantray and Kilravock shared a factor.

Lauder states he received a last-minute addition from Thomasina Campbell, which can be dated to mid-late July 1830, that included Elizabeth’s pottery illustrations. This ‘proto excavation report’ is certainly among the very earliest by any women in Scotland – until even older ones are discovered! This late update shows how determined the Campbells were to publicise their discoveries more widely.

Read all about it!

Sadly, we only have Lauder’s summary of Elizabeth’s words on Clava:

‘Druidical circles … The largest of these … enclosing … a great cairn … was lately opened (by direction, and under the superintendence of Mrs Campbell …) and a curious circular apartment was discovered … the wall converging … in a rude dome … the foundation being formed of 14 large stones … A passage leads inwards from the south’.

It seems that Elizabeth deliberately targeted one tomb for study. She took accurate dimensions and drew the entrance and three fragments of a bronze age urn which would have held cremated remains. (The origin of the published drawing of the dry-stone tomb passage is still being researched).

Women had previously illustrated antiquities, but unlike her, were not usually the main instigators of ‘barrow digging’. Two female proponents were even rarer.

It was ‘Miss Campbell’, in her mid-20s, who sent the detailed description of the urn included as the appendix. She explained the clay vessel:

‘was about 18 inches below the earth, exactly in the centre of the circle … a quantity of calcined bones were in it … The bottom is flat … the vase … enclosed in … clay quite distinct from the natural soil’.

Despite these remains, Lauder interprets this passage grave as a place of worship – a common belief at the time. He also expects Elizabeth to continue her ‘antiquarian investigations’ in the future.

The Campbell’s activity is now known to have been at the south-western cairn. Nevertheless, Lauder doesn’t specifically identify which monument she examined. This unfortunately caused decades’ worth of confusion.

In 1857, legal historian Cosmo Innes was the first to misplace the site, despite being married to one of the Kilravock family. He wrote: ‘The eastern … is the cairn … opened by Miss Campbell.’ Wrong tomb, and wrong woman!

This error became ‘fact’ in 1869, when the official Ordnance Survey cartographers misplaced the label ‘Urns Containing Calcined Bones found here’. It appears beside the north eastern cairn, rather than the south western one. The surveyors hadn’t interviewed the actual owners or farmers of Clava. Instead they relied on hearsay from gentry who were only small children in 1830.

Ordinance Survey Map of Nairnshire published in 1871, which contains the incorrect labelling of the cairns. Reproduced with the permission of the National Library of Scotland. (Attribution 4.0 International (CC BY 4.0).

At last in 1884, civil engineer James Fraser interviewed ‘people on the spot’, possibly some surviving workmen. This allowed him to place the Campbells’ legacy correctly at the western cairn.

The archaeological exploration of Clava Cairns is convoluted to say the least. Across the centuries these has been a conflation of owners, antiquarians, finds and locations. This excavation sequence requires further unravelling!

It’s also remarkable that no-one has commented on the quartet of female investigators who have explored this site. In the early 1930s, around a century after Elizabeth and Thomasina opened the south-western cairn, Kathleen Kennedy re-excavated the passage graves. Kennedy had studied under Professor Childe, a renowned professor of archeology. He recommended Kennedy to carry out the work at Clava Cairns and she was appointed by The Office of Works. Sadly, Kennedy did not go on to work in the field. However, one of Kennedy’s contemporaries and a fellow student of Prof Childe, Margaret Simpson, was likely the first professional (paid!) female archaeologist in Scotland. She became the first female Assistant Inspector of Ancient Monuments in 1930. 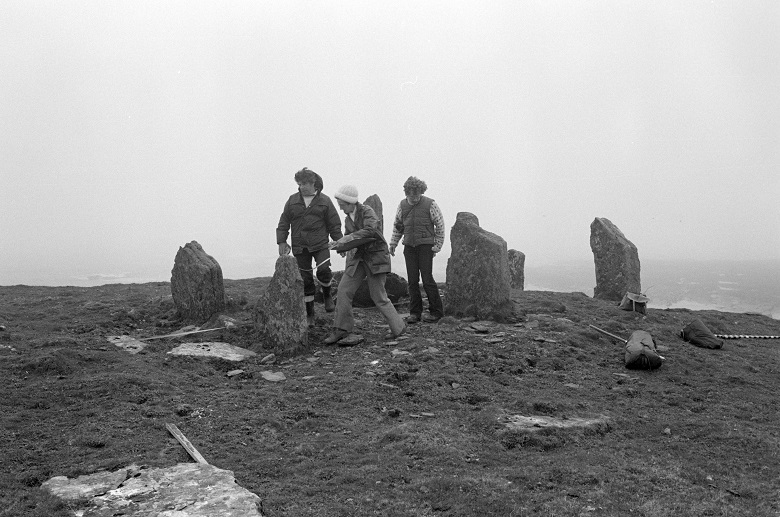 The Campbells were well-accepted by the landed classes of Inverness and Nairn, attending the expected annual charitable, military and hunting events of the season. They appeared at the ‘Northern Meeting’, a series of horse races, and evening entertainments, throughout the 1830s and 40s. They were also passionate horticulturalists, improving the plantings and policies of Kilravock at their own expense. Their less conventional interests can be detected – after the King of Saxony had viewed the gardens in 1844, it was Thomasina who, literally, took the reins, and ‘drove His Majesty to Cawdor Castle’! 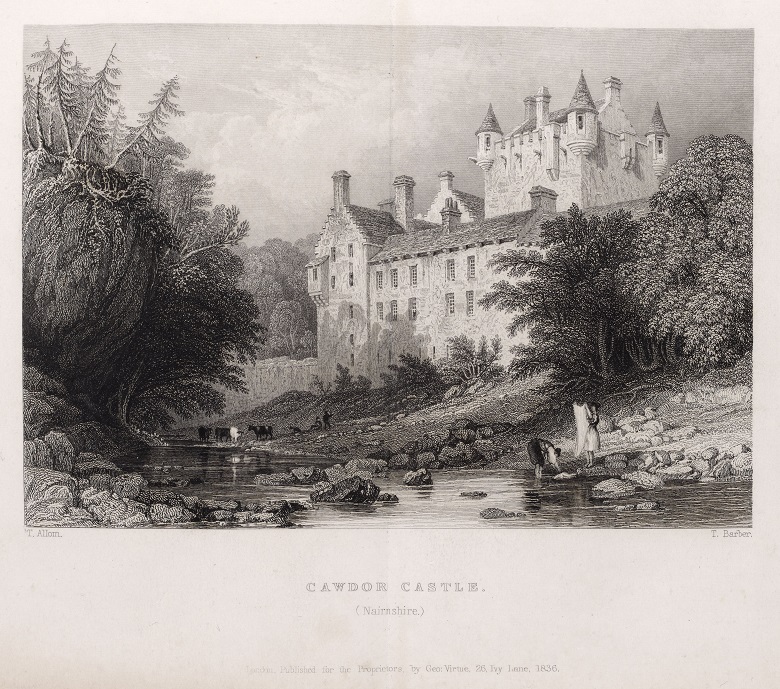 Cawdor Castle. © Courtesy of HES. Illustration in Views in Scotland.

Instead of giving her profession as ‘independent’, ‘private means’, or ‘annuitant’, as was conventional for rich widows, Elizabeth stated she was a ‘gentle woman, farmer of 188 acres’, employing 17, of whom 8 were female. Like her stepfather, she selectively bred pigs and Highland cattle, which won prizes at agricultural shows.

Elizabeth Campbell died in 1861, so from 1863, Thomasina rented Moniack Castle where she ‘antiquarianised’ the large rockery by installing the Balblair Pictish sculptured stone. 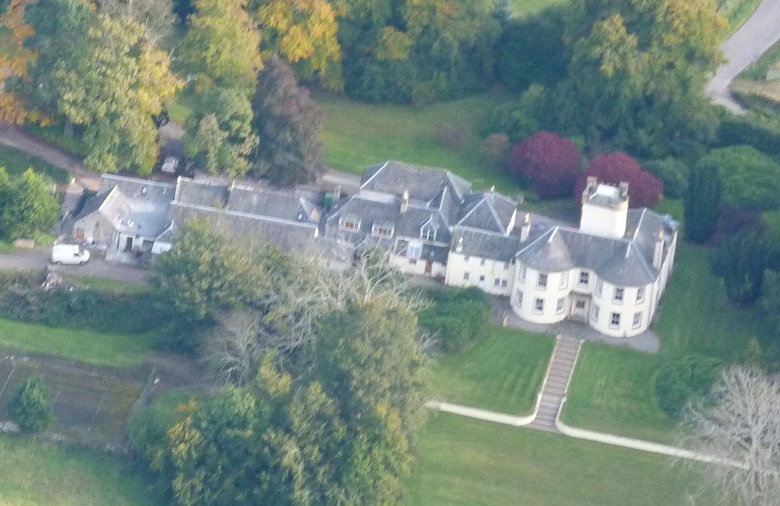 The Pictish stone combines Neolithic cup-marks, and the incised early-medieval figure of a male holding a sword or club. It’s not known where or why Miss Campbell collected this carving, but it remains at Moniack as a souvenir of her stay. 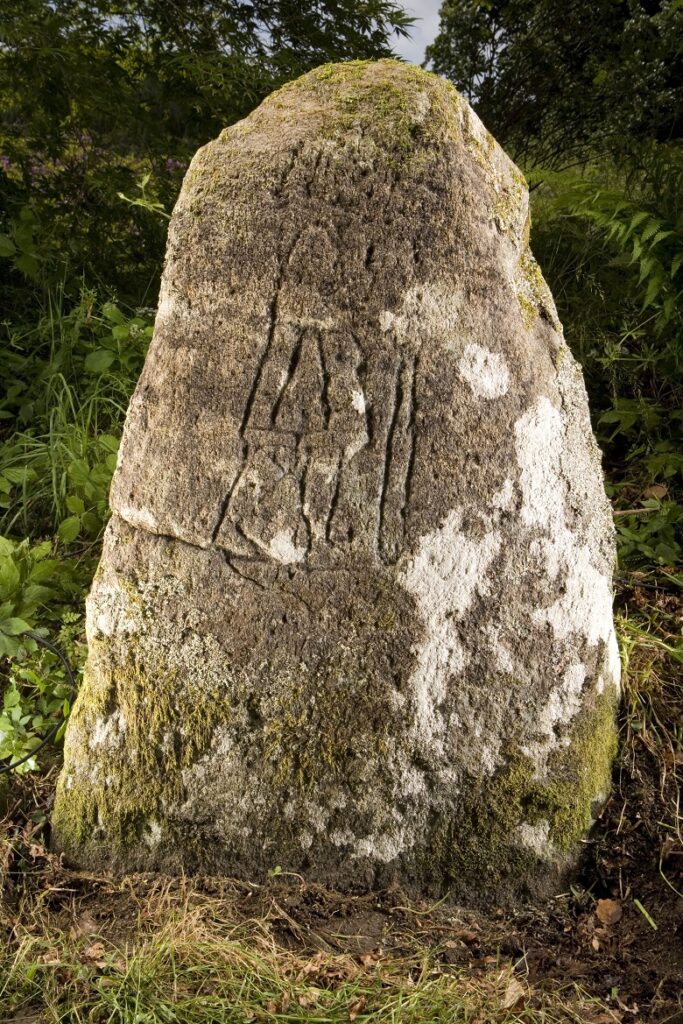 The Balblair Pictish stone became a feature in Thomasina’s garden. Scheduled Monument Consent would be needed if you wanted to move the stone today!

Following a visit to Corsica, Thomasina published ‘Notes on the Island of Corsica in 1868’, a guidebook for English visitors and intending settlers. She became deeply involved in property development and land ownership in Ajaccio, while always promoting it as a healthy resort for British expatriates, and a quieter alternative to the busy French Riviera. Thomasina was a successful businesswoman and entrepreneur, although I am still investigating this period of her life. She retained wide cultural interests, and was one of the founders of the tourist industry that still under-pins the Corsican economy. As an independent foreign woman, she and her commercial associates prompted varying opinions, and some controversy, among the islanders. Thomasina died while on holiday in Geneva, in 1888, and it is hoped a more complete account of her many-faceted activities will appear in due course.

Morag Cross is an independent researcher and archaeologist, specialising in histories of buildings and land ownership. Her archival research explores the unexpected links between previously unknown figures, especially women, and their social networks. She has worked on over 80 projects including business histories for the Mackintosh Architecture website, Glasgow Council’s official WW1 website, M74 industrial archaeology research, and Edinburgh’s India Buildings, Victoria St.