A Human Touch: How people have shaped Scotland’s landscape

From mysteriously abandoned hill forts to farming “on the edge of the world”, Scotland from the Sky presenter James Crawford uses a bird’s eye view to explore how people have shaped and re-shaped Scotland’s landscape over thousands of years.

Series Two of Scotland from the Sky continues on BBC One Scotland on Wednesday 24 April at 9pm. In this blog, series writer and presenter James Crawford explains how the programme uses views of the landscape from above to tell the remarkable story of how Scots have lived off the land for millennia.

Living off the land 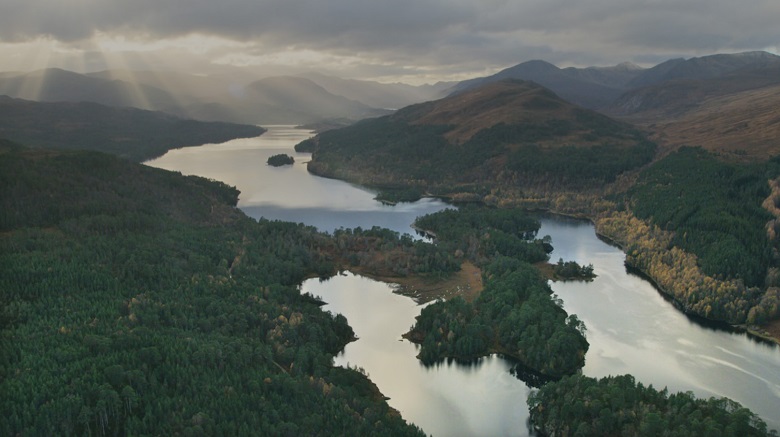 I think that the last time I climbed a tree I was about ten years old. Until I found myself, last November, standing at the foot of a beautiful Scots pine in the Glen Affric nature reserve on a bitterly cold morning. My task was to climb to the top of the tree, to try to get a view of a landscape that had dominated Scotland some six thousand years ago, before it disappeared almost completely.

Glen Affric offers the largest remaining area of pine forest in Britain that is closest to its original natural state. It’s a fragment of the great Caledonian Forest, which once covered as much as eighty per cent of Scotland. Making my way to the top, using a mixture of ropes and branches, certainly kept the cold at bay. And, while it wasn’t quite a helicopter or a plane, at twenty metres up, I think you can still call it a view from above…

Glen Affric was my starting point for a very good reason. If almost all of Scotland was once a great forest,  then what happened? Where did all the trees go? 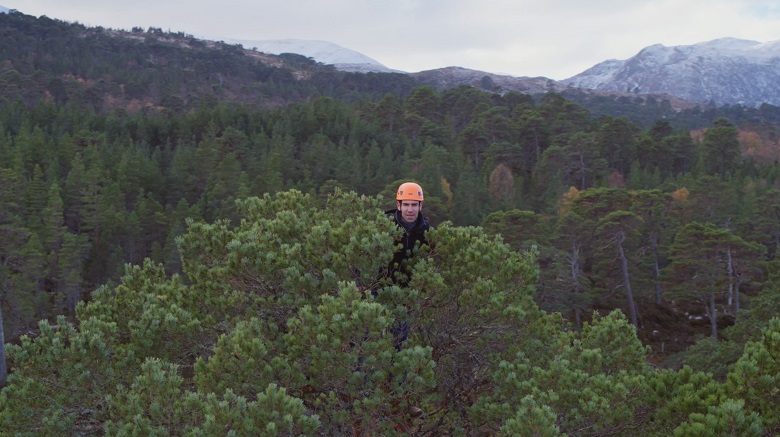 In the second episode in the series, we wanted to explore how people have shaped and re-shaped the landscape over thousands of years. How our ancestors carved their stories into the very ground we stand on: stories of survival and adaptation, war and conquest, immigration and depopulation.

Many see Scotland as a natural wilderness, untouched by human hands. The reality is that almost all of our country has been transformed by people. The land reflects who we are. If we want to restore and protect it today, we have to understand what we’ve done to it, the good and the bad, going all the way back to the very beginning.

‘Where did all the trees go?’ 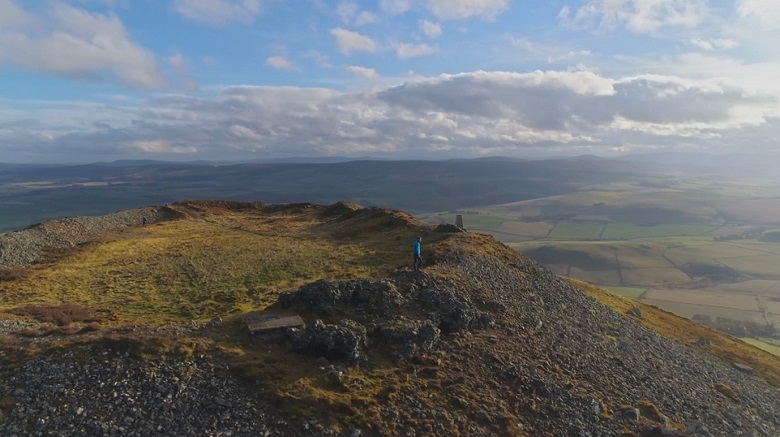 From Glen Affric we made our way by helicopter to a remarkable site in Aberdeenshire. The Tap O’ Noth hill fort is the second highest hill fort in Scotland. Landing right on the summit, we investigated its remarkable story. Its walls (now just masses of rocky rubble) were once made of the timber of thousands of trees. For reasons we still don’t fully understand, the whole fort was set alight. It was perhaps a way of destroying it ceremonially, so nobody else could ever use it again.

Hill forts like Tap O’ Noth were symbols of ways of life that were changing – sometimes dramatically. A decisive move away from hunter-gathering and towards farming led communities to mark out space and put down roots. Trees and forests were cut down for fuel and building materials, but they were also cleared to make room for crops. 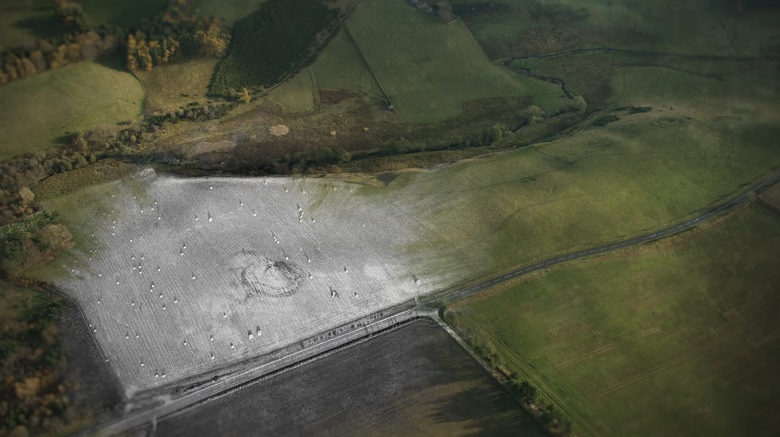 Crop marking spotted in an HES aerial photograph brought archaeologists to a remarkable Pictish site near Rhynie, now believed to be a power centre of international importance

In the shadow of the abandoned Tap O’ Noth, alongside the village of Rhynie, a Pictish community once flourished. We explored how crop marks, spotted in an HES aerial photograph, led to the discovery of a remarkable site. It may once have been a ‘Pictish palace’, a power centre with trading connections as far afield as the Byzantine Empire.

Farming on the edge of the world 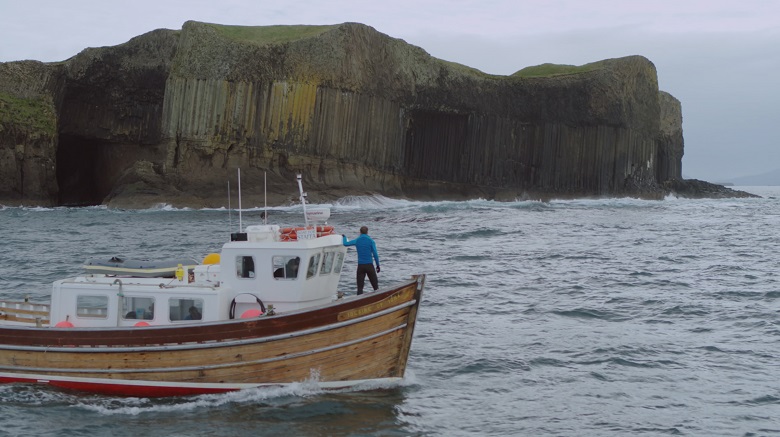 Tracking the enormous impact of farming on Scotland’s landscapes also took us to the remote and inaccessible Hebridean island of Staffa. It’s famous for Fingal’s Cave, the remarkable geological feature formed by cooling lava – but we were there to look for something else.

On the summit of the island, aerial photography reveals a landscape that has been intensively farmed. Recent investigations have discovered barley grains dating back over 2,000 years. It’s a demonstration that, even on a tiny island like this, on the edge of the ocean, we have worked the land.

We took a – not unwelcome – diversion to Islay to see a new distillery bringing back an old way of making whisky. A working farm uses just the crop, water and peat of the immediate surrounding landscape to create its dram. Then I was on my bike – literally – to tackle the highest road in Britain, built by General Wade in the aftermath of the first Jacobite Rebellion.

At the Corrieyairack Pass, I made my way by mountain bike up the remarkable – and brutal – series of eleven hairpin bends that take the road to the summit of the pass, some two and half thousand feet above sea level.  A journey my lungs and legs will never forget… 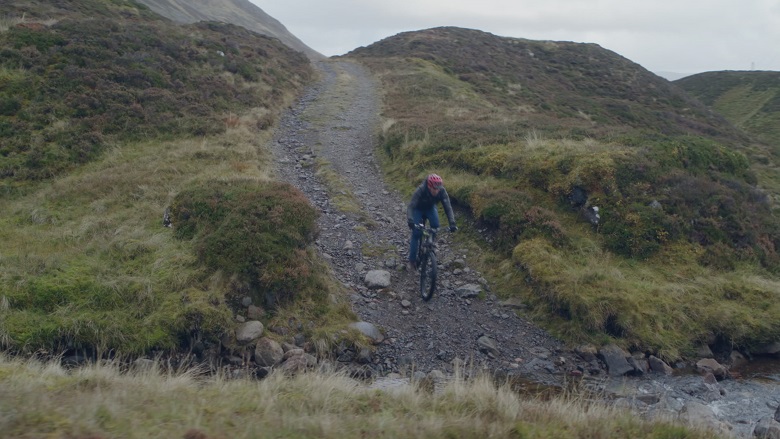 ‘A Monument to an old way of life’

By the eighteenth century, our landscapes were embarking on yet another transformation. Wade’s military roads were intended as barriers to sedition and unrest. Yet they were also symbols of infrastructure opening up access to travel and trade across Scotland. It was the beginning of the development of our modern economy. A change that would have a huge impact on communities throughout the country. 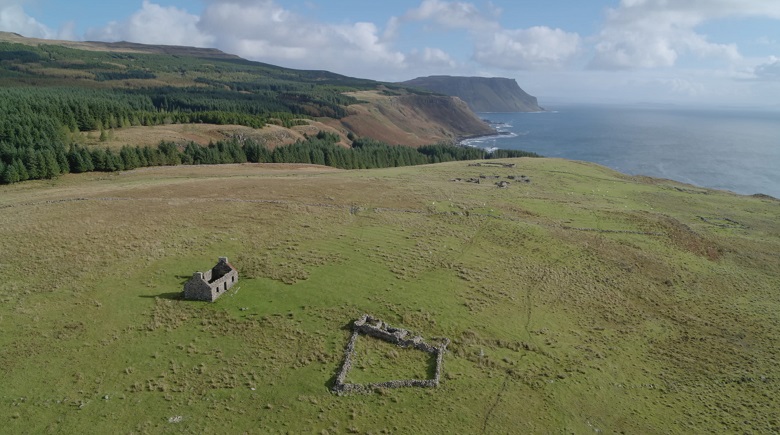 The clearance township of Shiaba on Mull, captured by drone

We travelled to Mull to investigate the story of just one of those communities. Meeting us among the ruins of the crofting township of Shiaba was Professor Sir Tom Devine. For Sir Tom, it is ‘an extraordinary place, and I don’t think there is anywhere like it as a memorial to clearance in any other part of the western highlands and islands’. This township once teemed with over 140 people. But in the summer of 1847, they were all evicted.

Some headed for Glasgow, others across the sea to Canada. Just one family remained.  Their job was to look after the new occupants that had arrived to replace the old ones: sheep. When the roof of their house blew off in a storm in 1937 they left too. Shiaba became a ghost village – one of many on Mull and across the rest of Scotland.

‘It’s a place of sadness’ Sir Tom told us. ‘But it’s also a monument to an old way of life, which has disappeared. An ancient way of life that as Scots we should remember, because that’s where our forefathers and foremothers came from’. 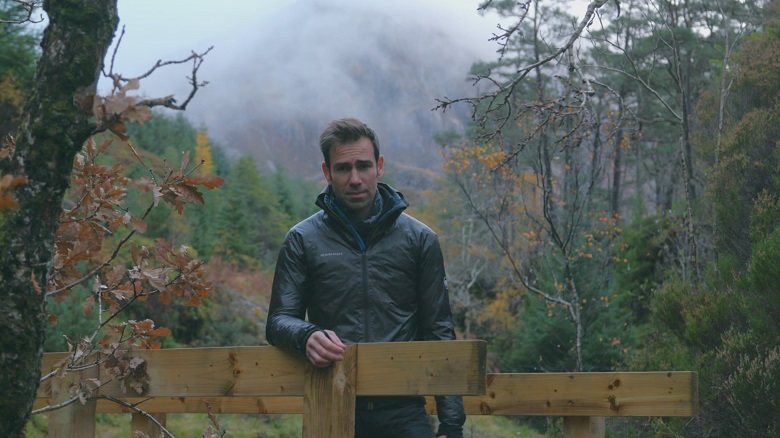 James Crawford in the forest of Achnashellach

Our final destination was the mountains of Strathcarron, and the forest of Achnashellach. Here loggers are cutting down and removing the old plantations of Sitka spruce planted some sixty years ago – using a remarkable pulley system to transfer the cut logs across a steep gorge.

At the start of the twentieth century, just five per cent of Scotland was forested. But over the past hundred years, trees have made a comeback. Now they take up some nineteen percent of our landscape. The aim is to reach a quarter by 2050. So, while the loggers remove the mature plantations, in their place they are letting the ancient Caledonian pines re-seed, in the hope that they will spread once again across our hills and valleys. 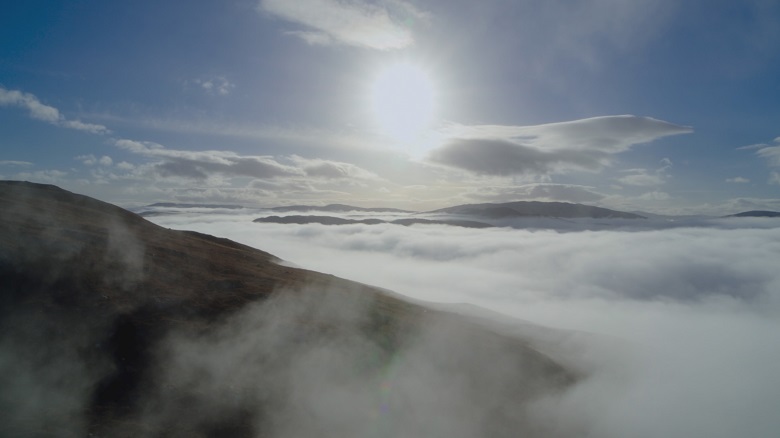 Glen Affric emerging out of the morning mist

What our journey showed us, was that there’s no better view than the view from above to understand how we’ve marked and changed the landscape over time. Ways of life can endure for hundreds of years before disappearing, almost overnight, scarring the earth, and scattering people. Therefore, the challenge today is to think carefully about how we’re going to mark the landscape into the future. About what we’re going to leave for the generations to come.

James’ blog accompanying episode one of Scotland from the Sky explores our changing coastline, from herring harbours to art deco swimming pools.