What would you ask a curator?

Have you ever wondered how we look after the contents that come with our castles, abbeys and forts? Now’s your chance to ask a curator!

It’s Ask A Curator day! This is your chance to get to grips with the curious contents of the places we care for.

When you visit an old castle, historic hill fort or ancient abbey do you try to imagine what it would have looked like in its heyday? Thankfully the people who used to live there left clues. Fragments of pottery, coins, trinkets, weapons, art and toys all help us to understand how people lived in the past.

Our Collections Team is lucky enough to delve into this hidden history every day. They look after a staggering 40,000 objects from 166 of the properties we care for. The items in our collections span over 5,000 years of history!

“At Trinity House of Leith you can find this unassuming bottle of seaweed in a bottle which was collected in 1905 on a voyage between Sydney and London on board the Loch Ryan. The Loch Ryan was a sailing ship which took passengers and goods between the United Kingdom and Australia. For me it conjures up an image of a sailor leaning overboard as the ship ploughs through the waves to scoop up his souvenir of a long journey halfway round the world.”
Rachael Dickson, Regional Collections Manager (Edinburgh) 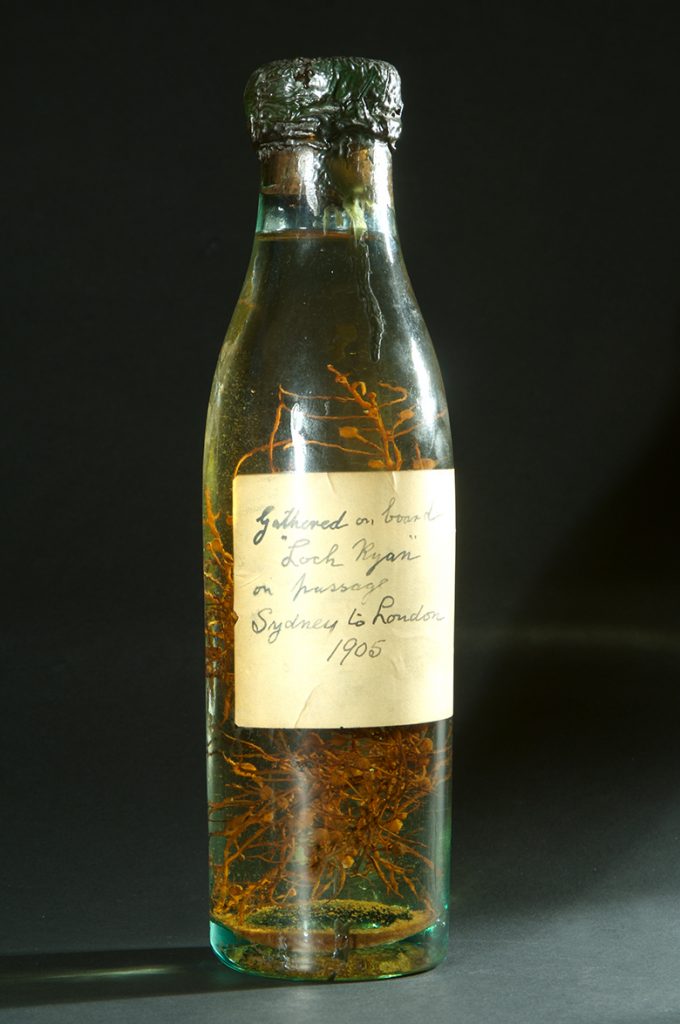 This unassuming bottle of seaweed in a bottle is typical of the many eclectic objects brought back by seamen during their travels.

“The collection of medieval archaeology excavated from the moat at Caerlaverock Castle is one of the best in Scotland. Hundreds of organic items survived because of the lack of oxygen in the water. This comb is one of my favourites. The heart suggests it was a love token, but the fine teeth were probably for removing lice – not very romantic!”
Judith Rowett, Regional Collections Manager (South-West) 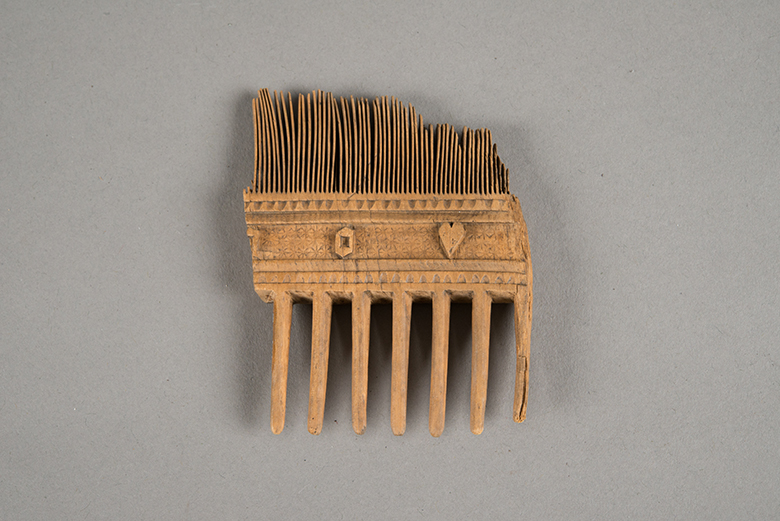 This birch wood comb dates from the 1400s. The design includes a heart and two sets of initials so it might have been made as a love token.

What’s the oldest object in your collection?

“The oldest objects in our collections date to the Neolithic period and most are from Orkney. The most famous of these is the Orkney Venus or Westray Wifie. This sandstone figure was discovered during excavations at Links of Noltland on Westray, Orkney, in 2009. It’s believed to be the earliest representation of a human in the UK, and is currently on display at Westray Heritage Centre”.
Sarah Connolly, Regional Collections Manager (North) 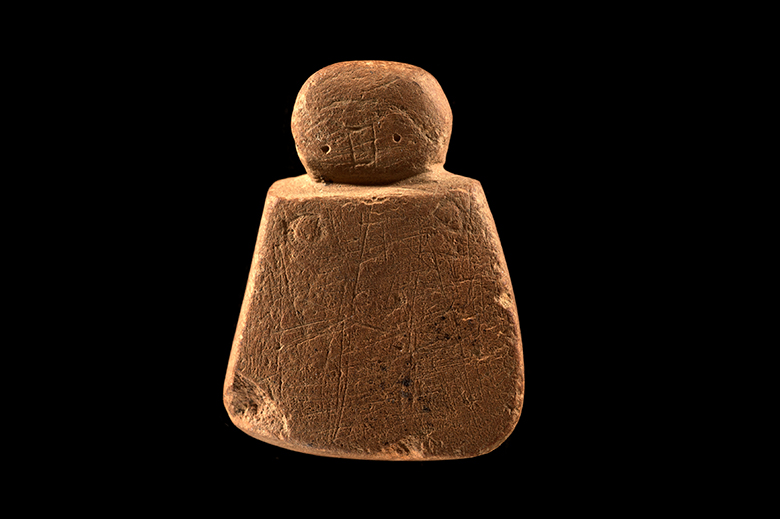 The Orkney Venus is around 5,000 years old. This small Neolithic figurine is about 4 centimeters in height and carved from sandstone.

What’s the most recent thing that’s been added to your collection?

“We’ve recently acquired one of the art works produced as part of the Meet Your Maker exhibition at Duff House. The piece is titled ’41 Hoards’ and was made by silversmith Megan Falconer using traditional techniques. It takes inspiration from 41 silver coin hoards that have been discovered in Scotland, the largest of which was 2000 coins found buried in a Roman clay pot.”
Corinna Leenen, Collections Manager (Duff House) 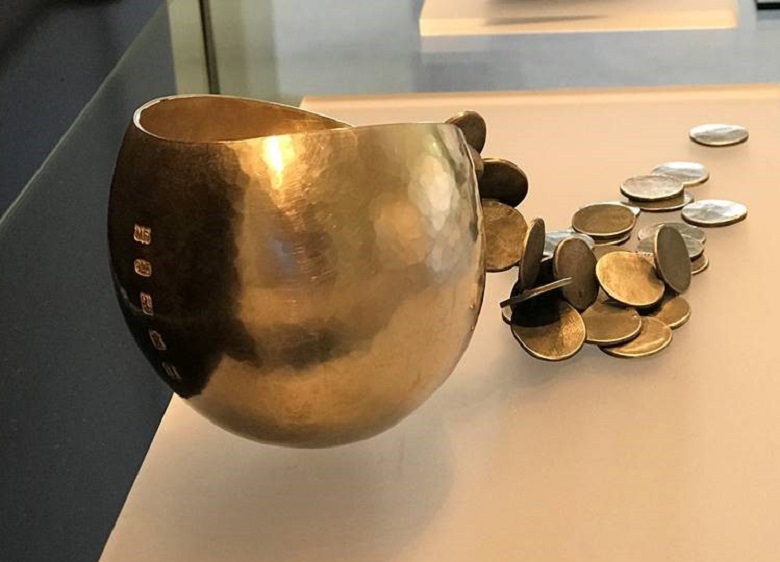 Tell us A Secret

“A unique aspect of our job is looking after the crown of Scotland, which includes overseeing its use at the opening of Scottish Parliament by the Queen.  Although the ceremony is quite short it takes months of preparation. Part of those preparations have included the creation of a dummy ‘crown’, consisting of a sandbag which weighs 3lb 10 oz – the exact weight of the real thing. This helps us recreate the ceremony as faithfully as possible before the big day!”
Richard Welander, Head of Collections 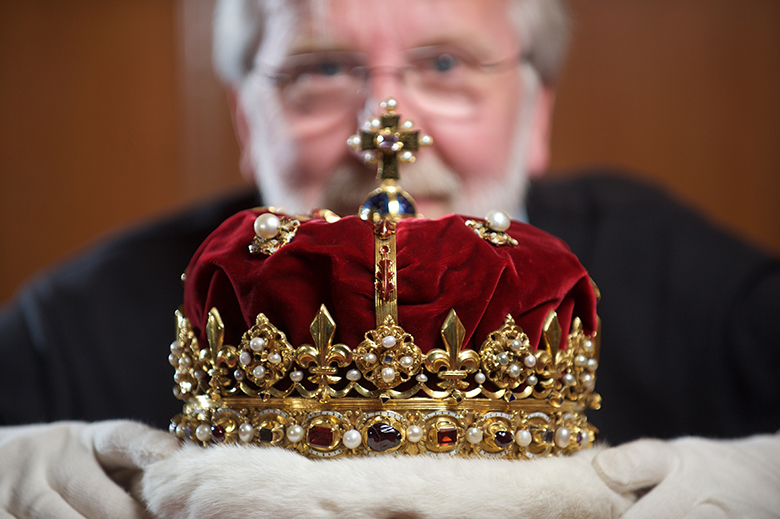 “We’re constantly battling with beasties! A lot of our collections are made from organic materials which are a good food source for certain types of insect, particularly moths and beetles. We have a monitoring programme in place which helps give us an early indication of any potential problems. When we suspect there is insect activity on an object the usual course of action – believe it or not – is to put the object in a freezer. It sounds odd but it’s actually quite a safe method of killing off all stages of the insect life cycle.”
Lynsey Haworth, Collections Access Manager

What’s the strangest object in your collection?

“We have a man trap on display at Deer Abbey. These were used in the late 1700s to catch poachers and trespassers on large estates. When sprung, the man-trap’s jaws clamped tightly together around its victim’s leg and could inflict serious injury. Convicted poachers were often hanged. The traps were made illegal in 1827.”
Rona Walker, National Collections Manager 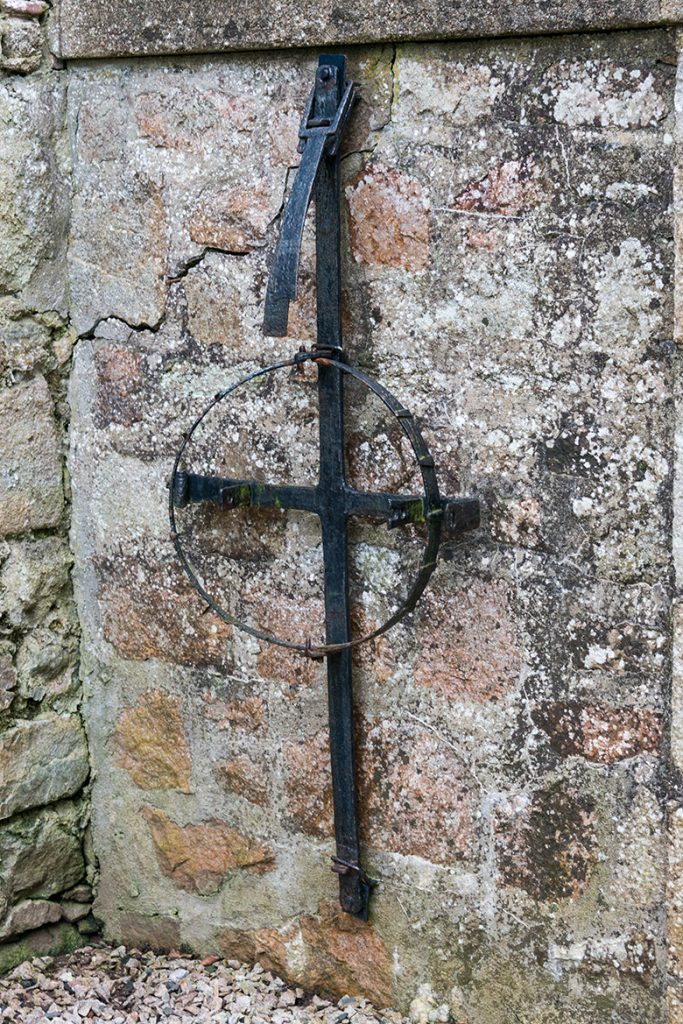 “The strangest thing I’ve come across so far is a witches ball. It looks like a giant Christmas bauble, but was hung in people’s homes to protect them from evil. Our witches ball dates to the mid-1800s, but their use can be traced back to the 17th century. Sadly it is not on display, but you can read more about it in this blog post.”
Beth Spence, Regional Collections Manager (Central) 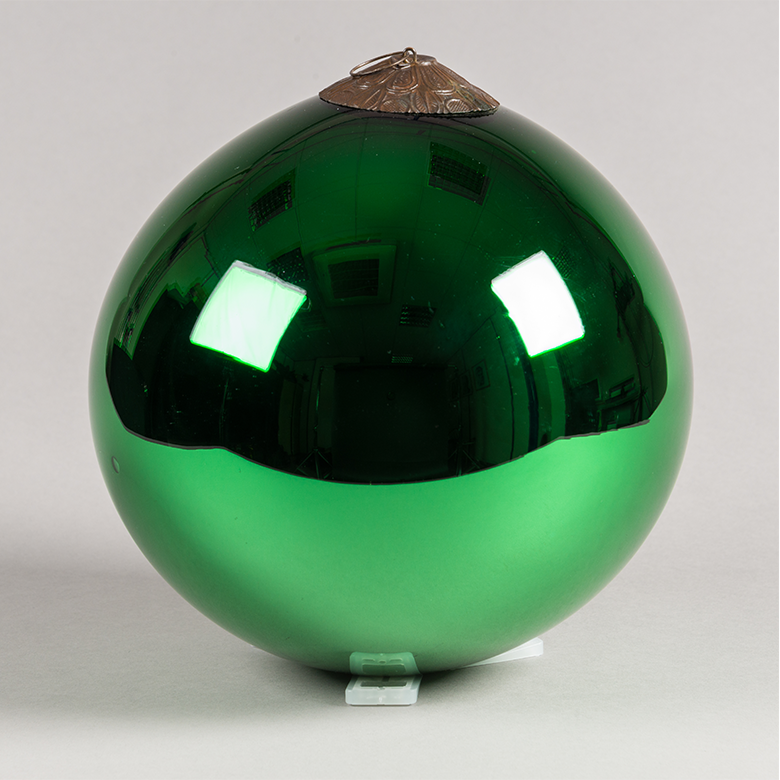 Recent investigations on the Witches Ball revealed a peak in the presence of arsenic. This suggests that the ball may have been made between 1835-1870.

“There’s no such thing as a typical day really! Our collections are stored and displayed across the entire country, so we do a lot of travelling which makes the job really varied. We get involved in a range of activities including cataloguing, arranging conservation, installing new exhibitions etc. Some weeks are spent in the office planning for these projects and others are spent putting the planning into action on site.”
Jill van Millingen, Regional Collections Manager (South-East) 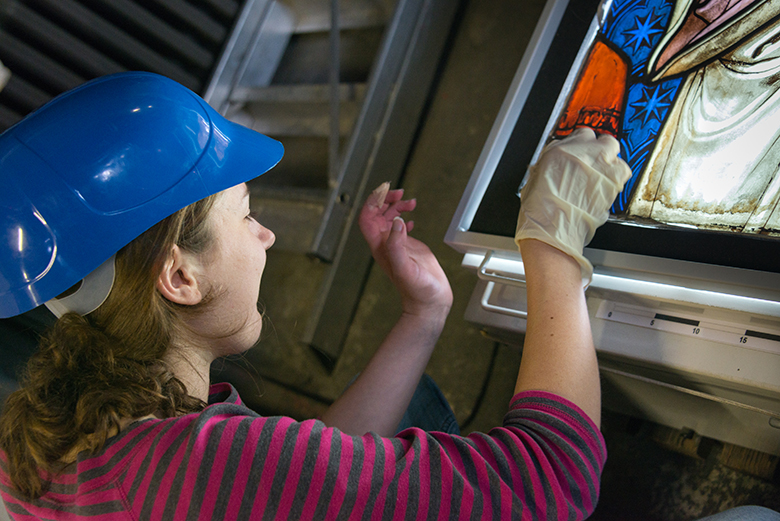 Jill working on a tray of Munich Glass from Glasgow Cathedral.

“I help manage our loans programme which involves working with lots of other museums and heritage organisations. There’s a lot of logistical arrangements that need to be made when we borrow objects from or lend objects to other institutions. As well as visiting our own sites I also get to visit other places to courier artefacts and oversee exhibition installations.”
Sara Charnley-Sellar, Loans Assistant

What part of the job do you enjoy the most?

“The thing I enjoy most is meeting members of the public. The main part of my job is providing tours and arranging open days at Trinity House Maritime Museum. Leith has an amazing maritime history, and it’s great being able to engage with the local community and listen to people reminisce about their lives in this part of the city.”
Adam Gorsyz, Trinity House Manager 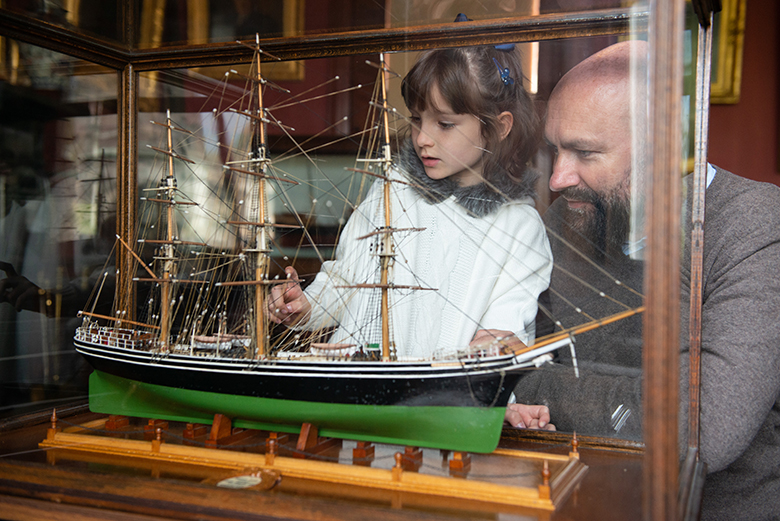 Adam shows the treasures of Trinity House to a young visitor.

“Our collections are really varied – they span over 5,000 years of history and range from small archaeological finds to large industrial machinery, from fine art to military objects, and pretty much everything in between. It’s amazing being able to work with such a wide range of historic material culture.”
Dr Ruby Ceron-Carrasco, Collections Documentation Manager 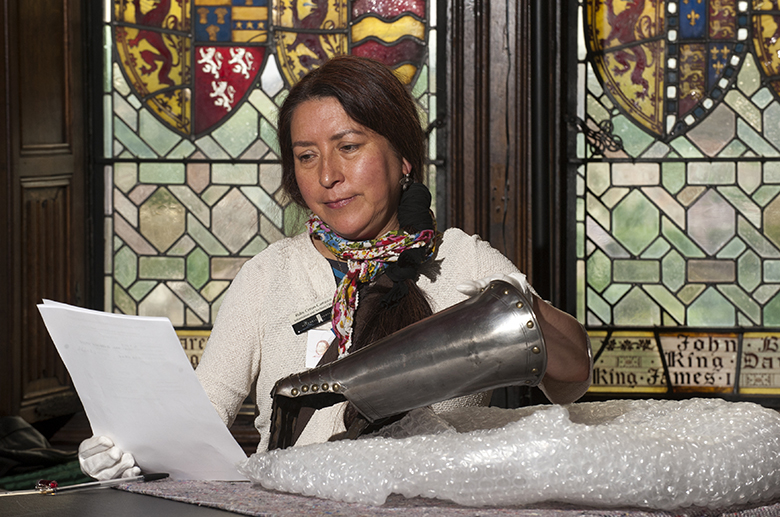 Ruby analyses the suits of armour in the Great Hall at Edinburgh Castle.

“I’m the newest member of the team having only started in June. I love how varied the job is! I’ve been able to get involved in a range of projects including auditing the archaeology displays at Melrose Abbey and installing the A Nation of Stone exhibition at the Engine Shed. I’m also doing lots of behind-the-scenes work so we can add more records to our collections website, which is a great way to learn more about the artefacts we look after.”
Inga Edwardson, Collections Management Trainee 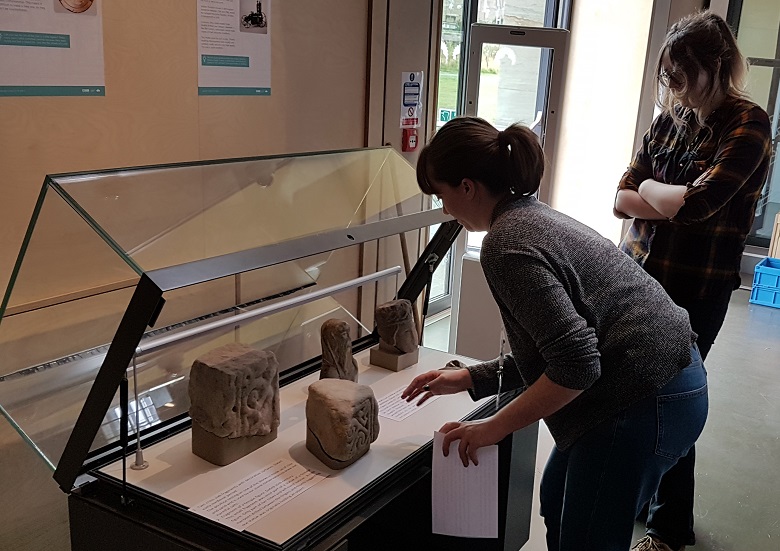 Behind the scenes setting up at the Engine Shed exhibition, A Nation of Stone.