Castles of the Black Douglases

James Douglas – The Black Douglas – was Robert the Bruce’s right hand man. Follow the fates and fortunes of his family as we explore the castles of the Black Douglases with Dr Callum Watson.

The Black Douglases were one of the most powerful and dangerous noble families in Scotland. They rose to prominence through service to the Scottish crown during a series of conflicts with England in the fourteenth-century. Unfortunately for the Douglases, fundamental changes in the make-up of Scottish aristocratic society in the fifteenth-century led to their downfall.

At the height of their power, the family controlled a string of castles all over the kingdom. This blog post will look at six sites now under the care of Historic Environment Scotland that help us chart the rise and fall of this tremendously important noble dynasty. 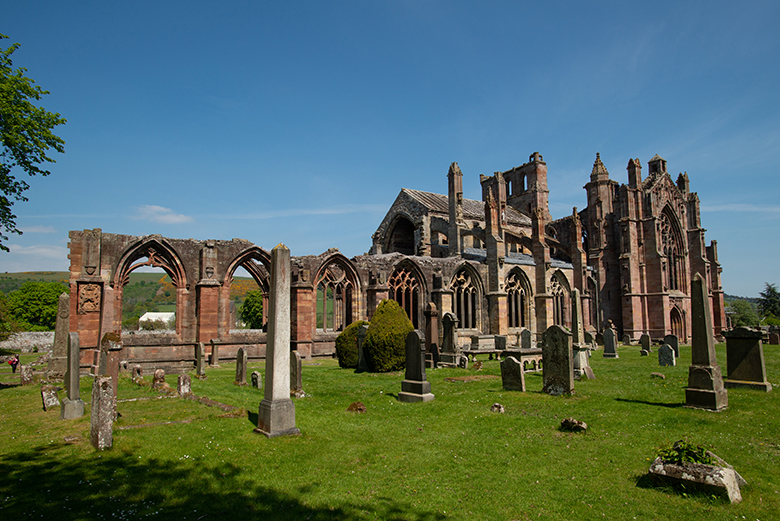 The Black Douglases owed their rise to power to the activities of ‘the Good’ Sir James Douglas. He was a vigorous and successful war leader and a counsellor of Robert the Bruce. When Bruce died in 1329 Douglas was chosen to take the king’s heart on crusade to Spain. When Douglas was killed carrying it into battle the heart was brought back to Scotland for burial at Melrose Abbey. This began a long association between Melrose and the Douglases, who sought to present themselves as the ‘special protectors’ of the abbey. The Douglases even adopted the ‘bludy hart’ of Bruce on their coat of arms, which can be seen around many of the sites mentioned below. 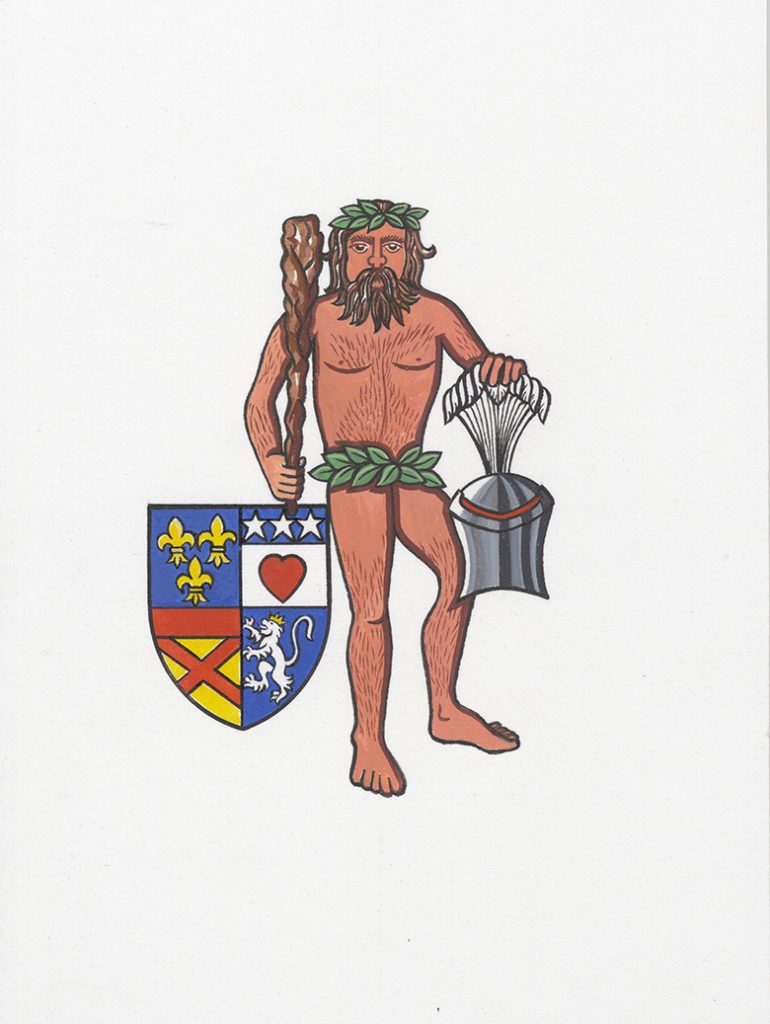 This is the heraldic seal of Margaret Douglas, Maid of Galloway.

Top of the Tree – Bothwell Castle 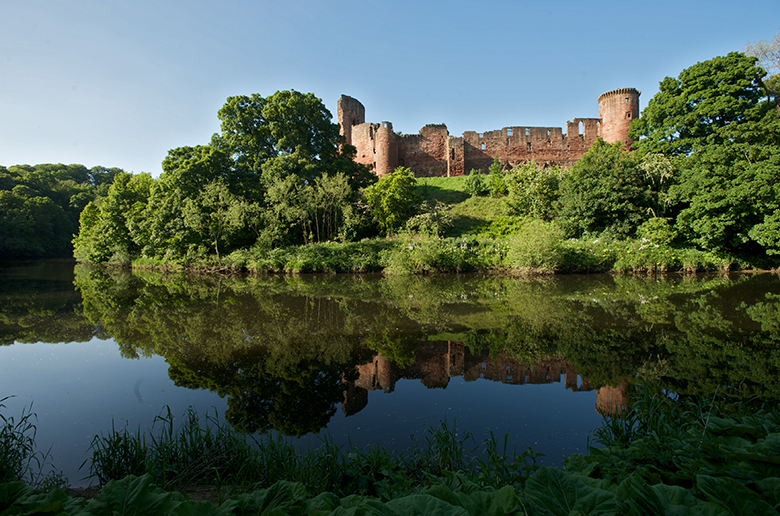 The Black Douglases may have risen to prominence with ‘the Good’ Sir James, but his son Archibald ‘the Grim’ cemented that power. Archibald was technically illegitimate and so was initially a minor figure in the Douglas family. However, in the 1360s King David II began to promote Archibald’s interests. In part, this was done to destabilise the influence of Archibald’s cousin William, 1st earl of Douglas.

In 1362 David arranged for Archibald to marry Joanna Murray. Murray was a wealthy heiress who owned a number of castles around Scotland. Of all of these, Bothwell Castle seems to have been Archibald’s favourite. It became his primary residence for the rest of his life. Archibald refortified Bothwell for use as a base from which to bring the fractious kindreds of Galloway under royal control. King David rewarded him for this service by making him Lord of Galloway in 1369.

It was at Bothwell in 1399 that Archibald’s daughter Mary married King Robert III’s son David, Duke of Rothesay. The marriage cemented Archibald’s position as one of the most important people in the kingdom and provoked his local rival the Earl of March to leave Scotland altogether! Archibald died, probably at Bothwell, around Christmas 1400 but the castle remained one of the most important Black Douglas residences. 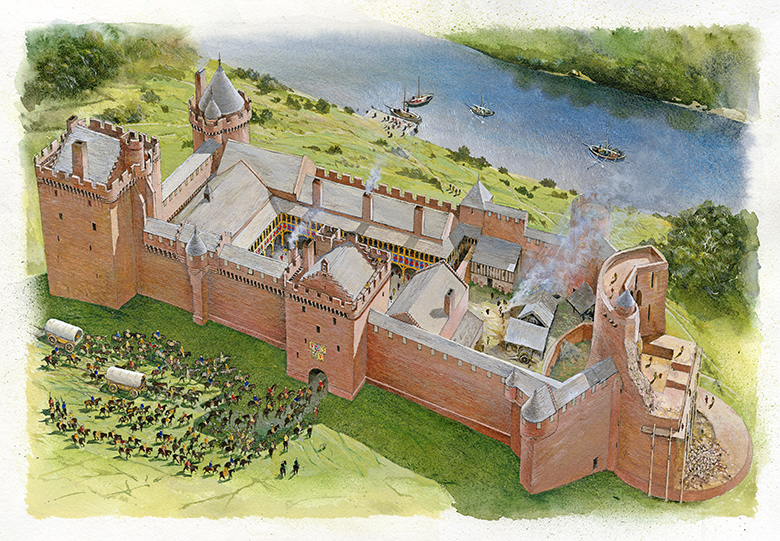 A reconstruction drawing of Bothwell Castle showing how it might have looked around 1420.

Archibald’s son – Archibald, 4th earl of Douglas – was an influential figure both within Scotland and abroad, and he turned Bothwell into a palatial dwelling in keeping with his ambitions. 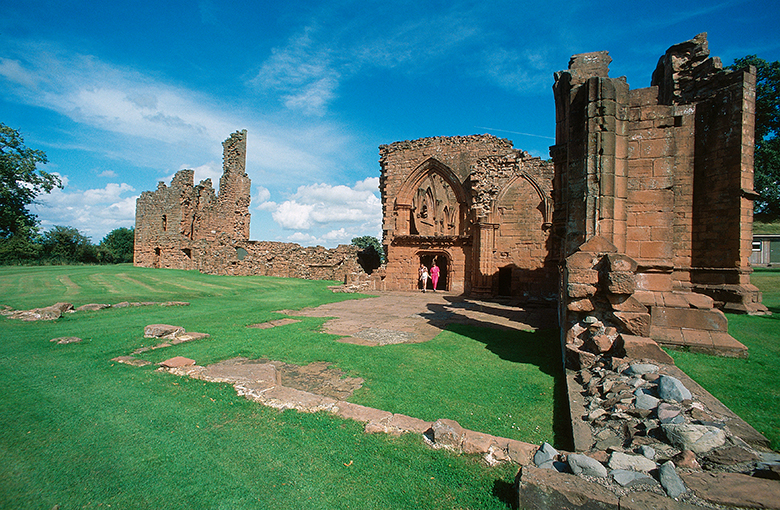 Archibald the Grim was quite a trendsetter. In 1389 he petitioned the pope to allow him to turn the nunnery at Lincluden into a collegiate church. He claimed that the nuns were living in sin with ‘very evil men’. The pope approved Archibald’s petition and Archibald removed the nuns by force!

Collegiate churches became very popular among the Scottish nobility in the years afterwards, with thirteen – including one beside Crichton Castle – being established in the fifteenth-century. Many of the early adopters of this trend – such as the Crichtons, the Hamiltons and the Douglases of Dalkeith – were kinsmen or allies of the Black Douglases. The rise in popularity of collegiate churches after 1400 may partly reflect a desire to emulate the family’s power and prestige. 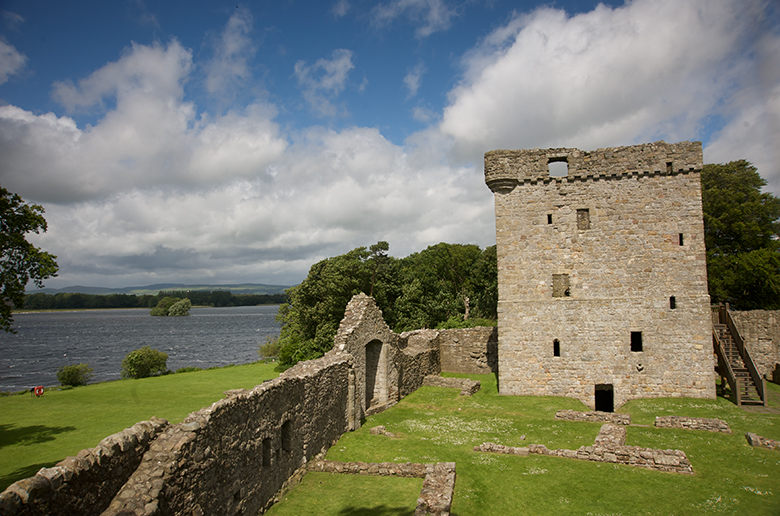 The Black Douglases owed their prominence to the faithful service of ‘the Good’ Sir James and Archibald the Grim to King Robert I and King David II. However, at the beginning of the fifteenth-century Scottish society was changing.

King James I of Scotland was distrustful of the ability of great magnates like the Black Douglases to maintain huge regional followings using the wealth generated by their enormous landholdings. Instead, James encouraged lesser noblemen to look directly to the crown for patronage and leadership. This gave him greater control in the localities.

In 1430 James briefly had his nephew Archibald, 5th earl of Douglas, imprisoned at Lochleven Castle. This was in an effort to prevent the earl from interfering in the local politics of Carrick in south-west Scotland. 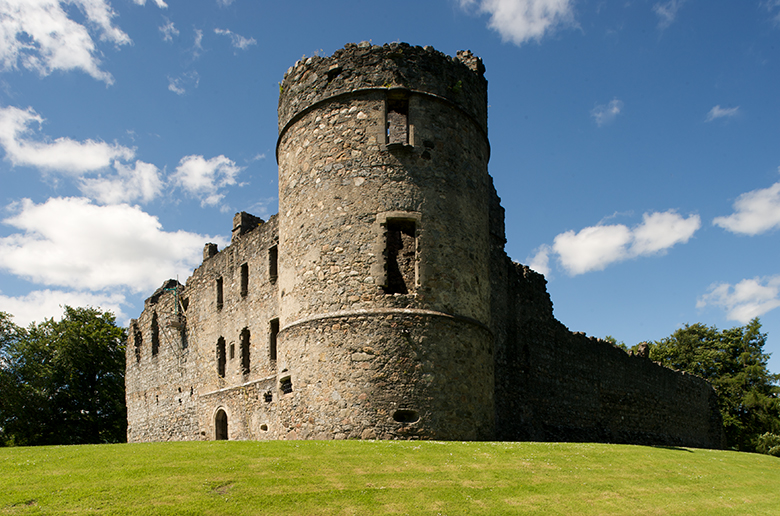 Family drama also weakened the Black Douglases in the early fifteenth-century. Archibald the Grim had two legitimate sons, Archibald (who succeeded him as the fourth earl) and James ‘the Gross’ (so called because he was so overweight in later life).

The fourth earl granted Balvenie Castle to his brother – James the Gross – in 1408. Balvenie was one of the castles that came to the family through Archibald the Grim’s marriage to Joanna Murray. He had hoped giving his son this northern castle would keep James out of the his business in the south. However, James continued to pursue a successful career as a royal courtier.

In 1440, James’s great-nephews William, 6th earl of Douglas, and David Douglas were arrested at Edinburgh Castle, tried on flimsy treason charges, and executed. This gruesome event, known as the ‘Black Dinner’, was also certainly orchestrated with James’s knowledge, and perhaps even his assistance. As a result of the Black Dinner James became the seventh earl of Douglas.

James’s sons used Balvenie Castle as a base from which to expand Black Douglas influence in north-east Scotland. To facilitate this, his son William, 8th earl of Douglas, made a deal of some kind with the other powerful magnates in that region – the earl of Ross and the earl of Crawford. This would ultimately sour relations between the Black Douglases and the Crown.

King James II was deeply suspicious of Ross and Crawford. When William refused to break the deal in 1452, King James personally stabbed the earl to death at Stirling Castle! This began three years of intermittent conflict that ended with the Black Douglases being driven from Scotland altogether.

The Harder They Fall – Threave Castle 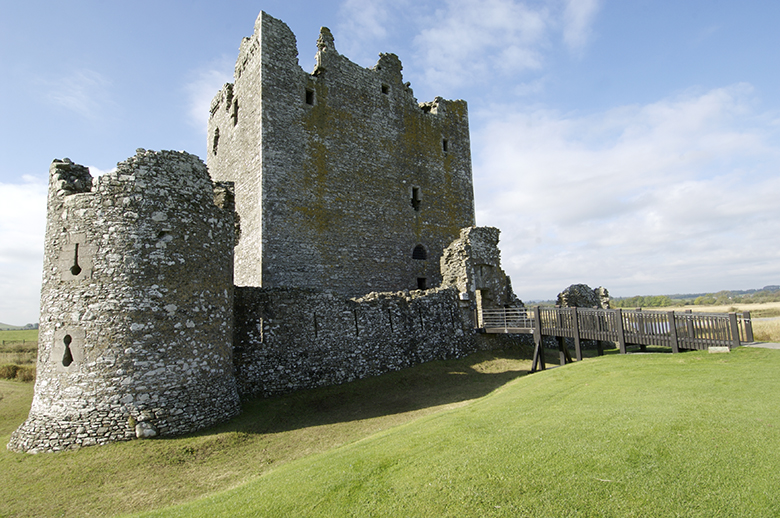 Threave Castle had been built by Archibald the Grim to cement his position as Lord of Galloway after 1369.

The tower-house design was unusual in Scotland at the time but started a fashion among Scottish castle builders that continued well into the sixteen-century.

Galloway was crucial to maintaining Black Douglas power. In the fifteenth-century it played a significant role in the efforts of the Scottish crown to limit the family’s influence.

In 1426 James I granted Galloway to his sister Margaret Stewart (Archibald the Grim’s daughter-in-law) for life. This was partly to undermine her son the fifth earl (King James’s nephew). From 1426 until around 1447 Margaret administered Galloway from Threave and did her best to do right by both her Douglas and Stewart relatives, despite the efforts of her Douglas kinsmen to wrestle the lordship back from her.

When she died she was buried at her father-in-law’s foundation, Lincluden Collegiate Church.

William, 8th earl of Douglas, eventually managed to recover Galloway and he or his brother the ninth earl undertook serious building work at Threave. Impressive and high-tech artillery fortifications were added at the base of their grandfather’s tower-house. This was likely intended to display Black Douglas power and prestige. However, it may also have been in anticipation of future conflict between the crown and the Black Douglases.

When that final confrontation occurred in 1455, Threave held out longer than any other Black Douglas stronghold. However, the typically conservative Scottish political community had by now come to support the king over the Black Douglases. The garrison at Threave surrendered to save their own lives.

Digging into the Douglas story

Between 1974 and 1978, Historic Scotland conducted archaeological work at Threave. It identified a series of out-buildings that were once clustered around the tower-house. The dig also revealed some wooden platters and bowls, each marked with the ‘bludy hart’. The prominence of the heart on these objects is a reminder that during a period when Scottish noble families generally wanted to emphasise how ancient their lineage was, the Douglases were eager to emphasise the fact that they owed their prominence to vigorous and faithful service to the Scottish crown in war. Their links to Robert the Bruce could not protect them from the changes happening in Scottish society in the fifteenth-century. However, it did ensure the family left an indelible mark on our perception of aristocratic life in medieval Scotland.

Outlaw King and The Bruce Trail

The Black Douglas was a firm favourite among fans of the film Outlaw King. Check out the Historic Scotland Robert the Bruce Trail to go behind the scenes and visit the filming locations of Outlaw King and discover the real story of Robert the Bruce.

Callum is a Steward at Blackness Castle. He has a PhD in Scottish medieval history, looking at knighthood in fourteenth- and fifteenth-century Scotland. He served as a historical advisor on Outlaw King, and appeared in the BBC documentary Rise of the Clans. View all posts by Callum Watson