Tenements, tower blocks and townhouses. Over the centuries Scotland’s houses have adapted to fit the the economic and social circumstances of the day. What does your house reveal about Scotland’s history?

Tenements, tower blocks and townhouses. Over the centuries Scotland’s houses have adapted to fit the economic and social circumstances of the day. What does your house reveal about Scotland’s history?

Scotland might be famous for its quaint rural cottages and craggy castles, but over 90% of people in Scotland live in settlements of over 500 people. From tenements to terraces, high rises to bungalows, Scotland’s town and cityscapes can tell us a lot about the history of its people. In this post, we’ll take a look at popular forms of urban housing in Scotland.

If you’re keen to conserve your own little piece of Scottish history, we’ve included links to our guidance on maintenance and upgrading at the end of this blog.

Scotland’s traditional tenements developed as an economic method of building when faced with high land values, stricter building regulations and the high cost of building in stone.

Characteristics of the tenement include:

For richer, for poorer 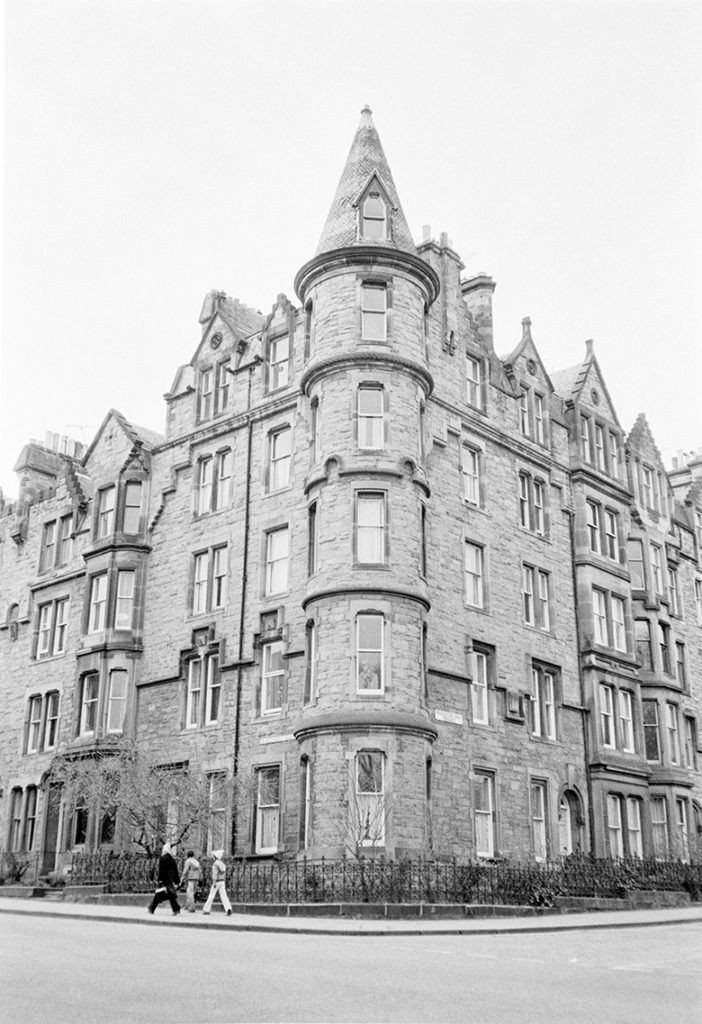 At the other end of the scale was the ‘room and kitchen’ or infamous ‘single end’, a house of only one large room, often with bed recess, store and shared stair toilet. However, the worst accommodation was within older tenements or houses which had been ‘made down’. Many were badly subdivided to squeeze in more tenants, with some rooms having neither windows or ventilation. 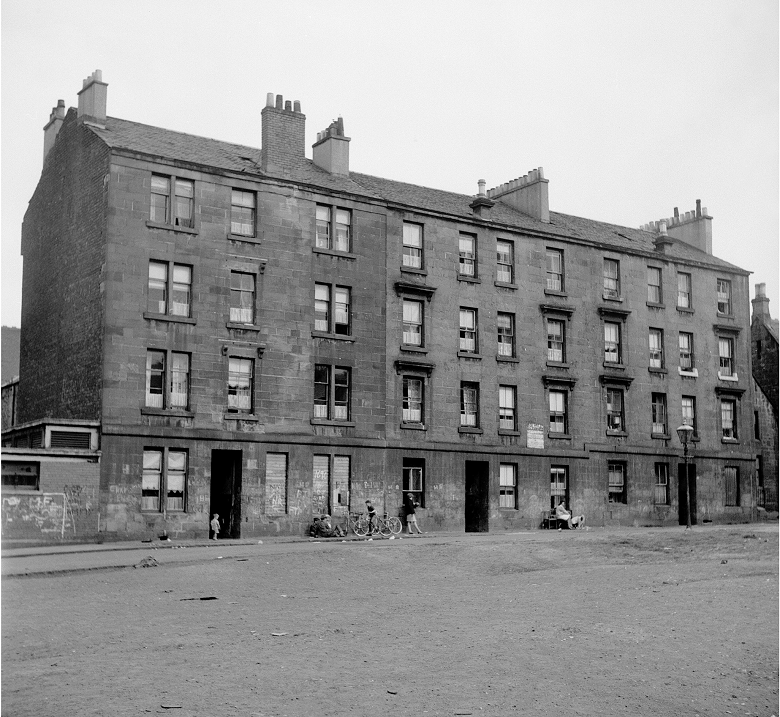 Demand outstripped supply and by the outbreak of World War One around 50% of Scottish families were living in either one or two room houses. Severe overcrowding and insanitary conditions multiplied the spread of disease, giving the tenement a bad name.

By the time the State intervened with the 1919 Housing Act tenements were discouraged. Huge numbers were demolished in major slum clearance schemes either side of World War Two. The 1970s saw campaigns against comprehensive redevelopment, often spearheaded by residents and community groups. New grants  meant tenements could be adapted and refurbished to provide fine new homes.

Today, the traditional tenement is a popular home for many Scots. These homes often have large kitchens, and high-ceilinged rooms lit by tall sash windows. Many retain fine decorative features, such as chimneypieces, plaster cornices and panelled doors. And their urban location means they’re close to amenities and workplaces.

Following World War Two, State advice went so far as recommending the name ‘tenement’ should be expunged in favour of the more modern ’flats’. 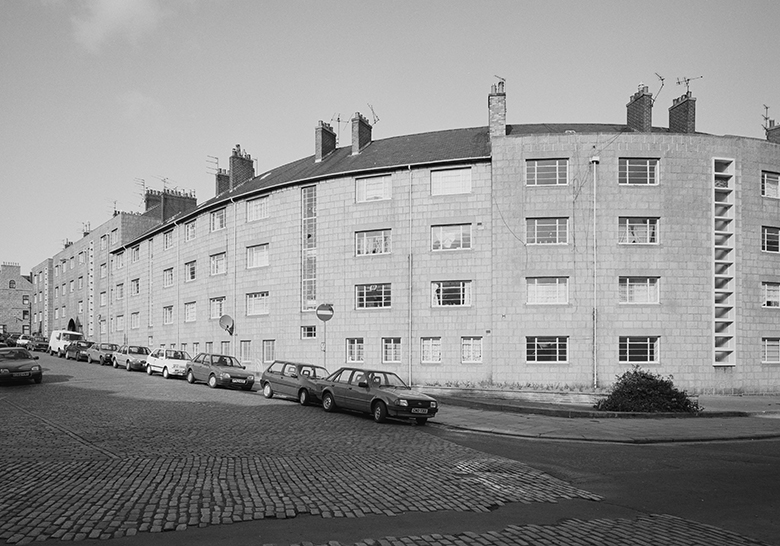 High-rise housing (requiring lifts) was uneconomic until 1957 when the Government gave a subsidy to encourage their use. Hundreds of inner-city multi-storey blocks were built to meet the desperate need for social housing. These included two 17-20 storey schemes in the Gorbals, Glasgow and a series of high-quality blocks in Aberdeen. Most were built on land cleared of tenements which had been declared slums.

Characteristics of the multi-storey block: 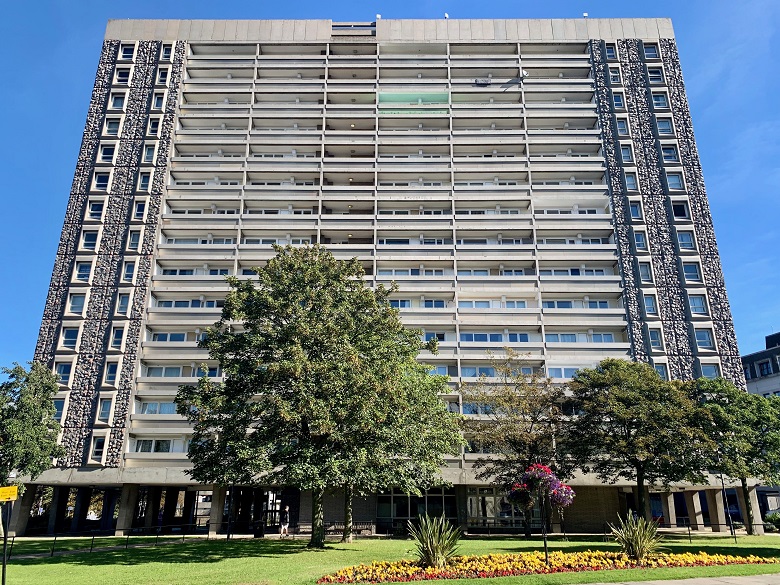 Thistle Court, designed in 1971 by Aberdeen City Architects Dept, has 15 storeys and 126 flats, most built as crossover maisonettes, enabling views on both sides. These were bespoke designs for Aberdeen and feature granite aggregate panels.

Many families in Scotland live in terraced houses. These can range from a row of one-storey cottages to the grand terraced houses of Edinburgh’s New Town and Glasgow’s West End. 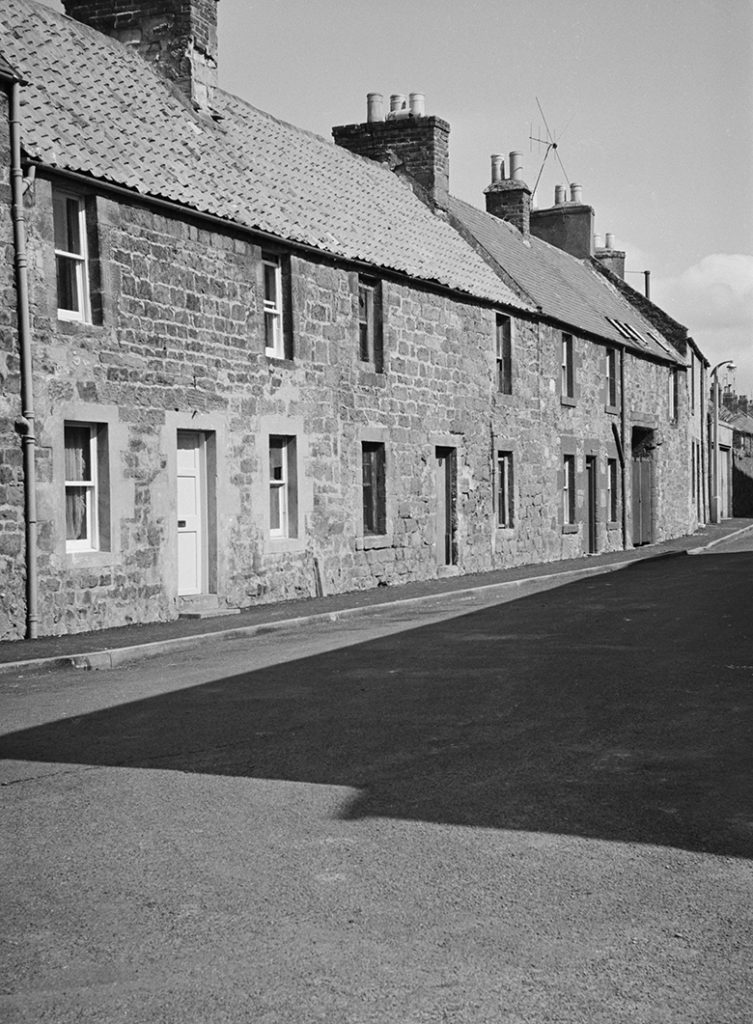 Terraces were economic to build, making the most of sites with continuous facades and shared gables and chimney stacks.

The grander terraced house first appeared in mid-17th century England, and the following century was emulated in Scotland. Edinburgh’s New Town is a notable example, where terraced houses replaced the social and retail mix of the Old Town’s tenements. Robert Adam’s Charlotte Square in Edinburgh (1792) popularised the palace front, where individual houses are combined to make a grander architectural whole. Thereafter, many terraced houses (and tenements) were built within beautifully planned squares and crescents.

Although there are variations, terraced houses often conformed to similar plan forms.

Characteristics of the larger terraced house include: 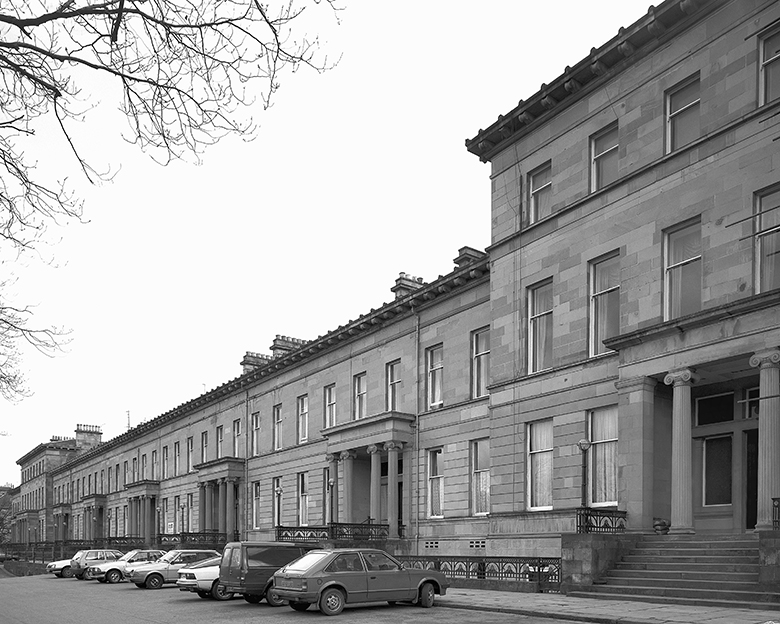 Scotland favoured the tenement for mass housing, rather than the rows of brick terraces built quickly and cheaply in England. One exception to the tenement is the ‘colony’ style of housing. Between 1850 and 1910, philanthropic organisations in Edinburgh built these as housing for skilled working-class families. These homes were built in terraces with smaller ground floor flats and ‘double upper’ flats reached by an external stair, all with access to a private garden. 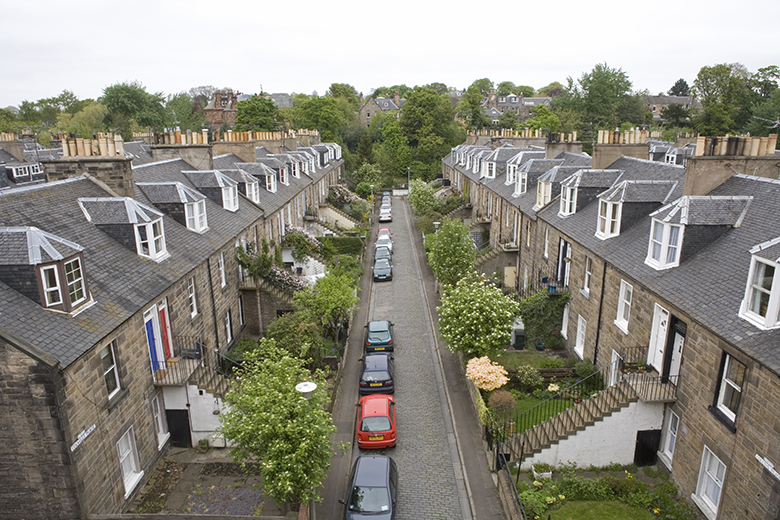 Colony hoses off Glenogle Road in Edinburgh. Colony style housing in Edinburgh has recently seen a revival in new build developments in the city. For example, at Leith Fort.

From the 18th century, wealthier middle-class families wanted detached houses with gardens, away from the pollution, noise and industry of city centres. These new style houses they moved to were known as villas. Large numbers were built on the edge of most towns and cities.

Minto Street in Edinburgh is a good example of an early villa development. Built from 1810, it sits on an arterial road at the then edge of the city. Later in the century entire suburbs of villa housing like Pollokshields in Glasgow, or Broughty Ferry in Dundee began to be built.

Characteristics of the villa include:

In the mid-19th century villas were often quite plain externally, but contained lavish plasterwork and other decorative features inside. From the late 1870s designs moved away from plainer exteriors to more expressive facades. At the same time, interiors became lighter, simpler and more homely. High ceilings and heavy plasterwork were replaced by cosy panelling and simple plaster details inspired by the Arts and Crafts movement. 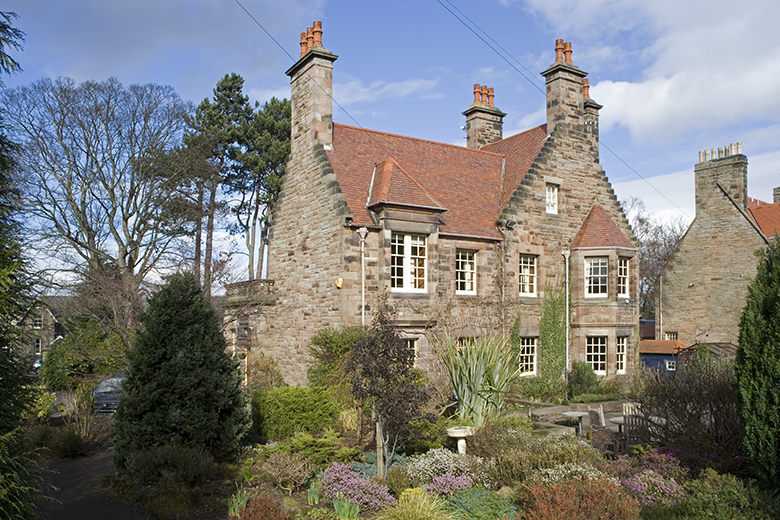 Allermuir (1880) by Sir R. R. Anderson. Villas were often designed by the leading architects of the day.

Where there wasn’t the money to provide a detached villa in its own grounds, semi-detached villas were built. Sharing a dividing wall helped to keep the building costs down. Such cost-cutting continued throughout the 20th century with smaller houses (with no requirement for servants), reduced levels of external and internal decoration, and a notable reduction in room sizes and ceiling heights.

The bungalow can be viewed as a direct descendant of the humble Scottish cottage. It first appeared in the latter 19th century, but began to be built in huge quantities in Scotland’s suburbs in the early 1930s by volume housebuilders such as James Miller in Edinburgh and MacTaggart & Mickel in Glasgow.

The bungalow was a good solution for people who didn’t have the income to live in a villa or semi-detached house, but who wished to own their own home.

Most bungalows were conservatively designed to a limited number of patterns, with few embracing the streamlined ‘moderne’ flat-roofed style. A few provided covered loggias and porches, harking back to the Indian prototypes they took their name from. Lower down the scale the stone fronts gave way to pebbledash and slate to clay tile, and later still concrete.

Bungalows remain popular to this day. Their comparatively large gardens mean they are often extended, with extra rooms added in the roofspace. 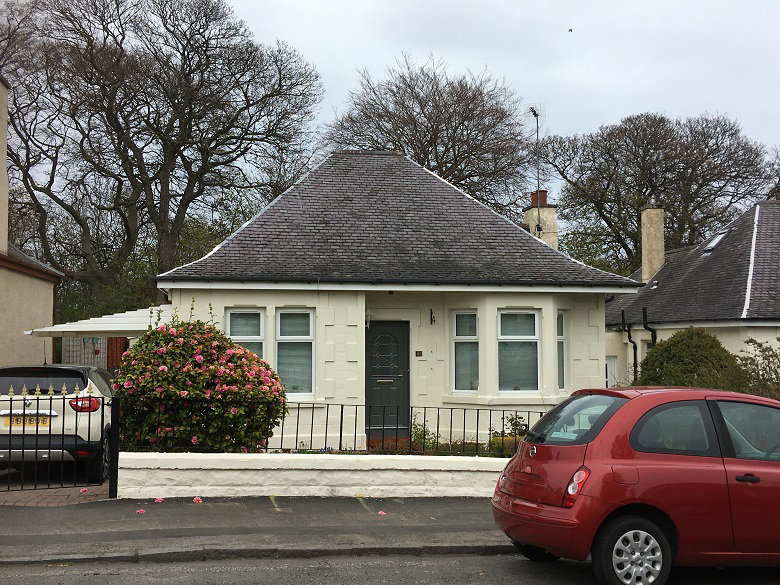 Bungalow in Priestfield Road, Edinburgh. Built in 1934 by James Miller (now Miller Homes). It had an artificial stone front and sold for £640. Photo courtesy of Steven Robb.

Flatted blocks – the four in a block

The four in a block, also known as the cottage flat or flatted block, is a peculiarly Scottish hybrid. It can be seen as a compromise between the tenement and the cottage.

The individual flatted block really came into its own following the 1919 Housing Act. The state ideal was the cottage, an individual house with an internal stair, and many early estates were built in this form, like Mosspark in Glasgow. However, flatted blocks soon found favour because they were cheaper to build, could still conform to lower density garden city layouts, and also catered for the traditional Scottish habit of living on one floor. 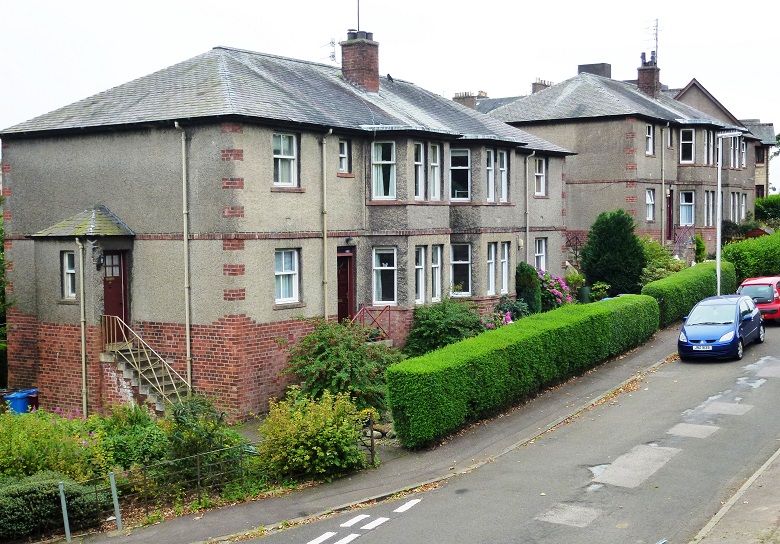 Logie Housing Estate, Dundee. Four in a block housing built under the 1919 Housing Act in harled brick. Each house had its own front door, the upper flats with side doors.

Characteristics of the flatted block include:

Between the wars flatted blocks were built in huge numbers – around 140,000 homes altogether. In this period they accounted for over half of all council housing built in Scotland.

Protecting the past and planning for the future

At Historic Environment Scotland we have an obvious role to play in helping to protect our housing heritage, but we also have ideas around what the future could hold. We recently responded to a Scottish Government survey on the topic – Housing to 2040. You can read our response here.

Around one in five of Scotland’s homes is traditionally built and at least a century old, but most housing isn’t listed or within a conservation area. Nevertheless, housing types are important in showing the evolution of our historic built environment.

Our casework team deals daily with proposed changes to listed buildings. Our job is to provide specialist advice to local authorities who then determine applications.
The key is managing changes sensitively in order to retain the special character of a listed home, whilst ensuring the buildings remain popular and sought-after places to live. Get an overview of our role.

Head to our website to see a selection of refurbishment case studies. These show how different traditional housing types can be repaired and upgraded sensitively for improved energy efficiency.