All around the world, communities are celebrating the Festival of Light. We take a look at how the festival is celebrated in Scotland’s past and present with Puravi Kumar.

Diwali is the most significant festival in the Hindu calendar. It’s celebrated by communities across the globe and has become a prominent date in Scotland too.

From 12 – 16 November, many in the the Scottish South Asian community will be celebrating the religious Festival of Light. 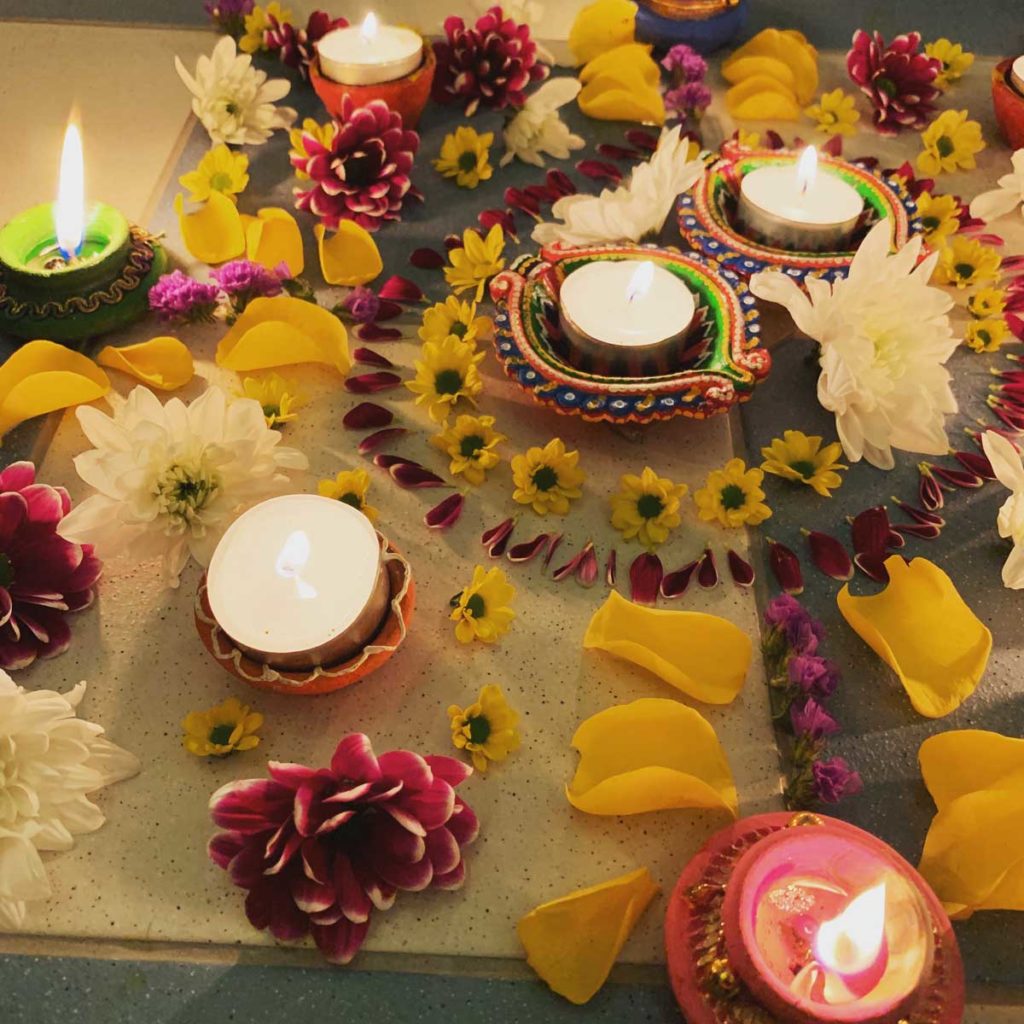 The Festival of Light

Diwali comes from the Sanskrit Deepawali, which means “row or series of lights”. The Festival of Light is celebrated with lighting diyas (oil lamps), creating Rangoli patterns and fireworks.

Celebrated by Hindus, as well as most Sikhs, Jains and some Buddhists, Diwali signifies the victory of light over darkness. To us, it symbolises good over evil and knowledge over ignorance. For some northern Indian communities, it also welcomes in the new year.

The festival takes place over five days in November. In 2020, according to the Hindu lunar calendar, the main day of Diwali falls on Saturday 14 November. This day is a national holiday in various countries including India, Malaysia, Nepal, Pakistan, Singapore and Trinidad and Tobago. 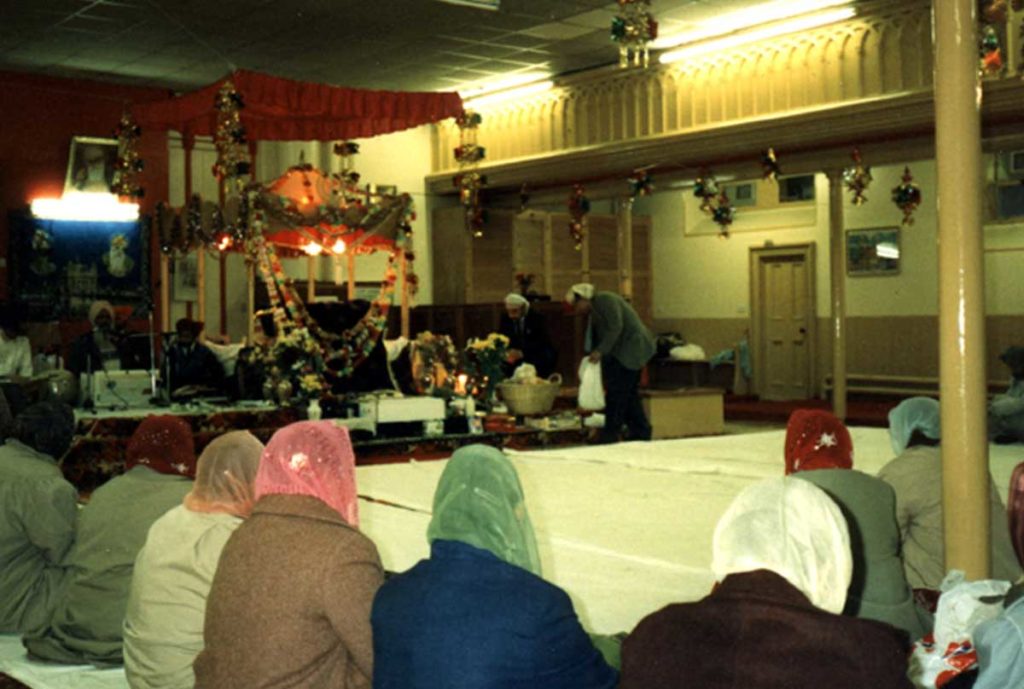 After the Second World War, there was a movement of migration for Sikhs, moving from India to Britain. Many settled in Leith and continued their cultural traditions, such as celebrating Diwali in gurdwaras (places of worship). Sikh women traditionally cover their heads when they go to the gurdwara, seen here in the 1980s. © City of Edinburgh Council. Licensor www.scran.ac.uk.

In Scotland, Diwali has been celebrated since the 1950s, from colourful celebrations under the lights of Edinburgh Castle and along the streets of cities, to community halls and temples. Among the first South Asian families and students who settled in Scotland, it was a smaller affair, set solely within homes and surrounded by family.

Like these families, this year I’ll be celebrating Diwali at home.

The Story of Diwali

There are various stories linked to Diwali within each religion, but one of the well-known traditions comes from Hinduism: the story of Rama and Sita. 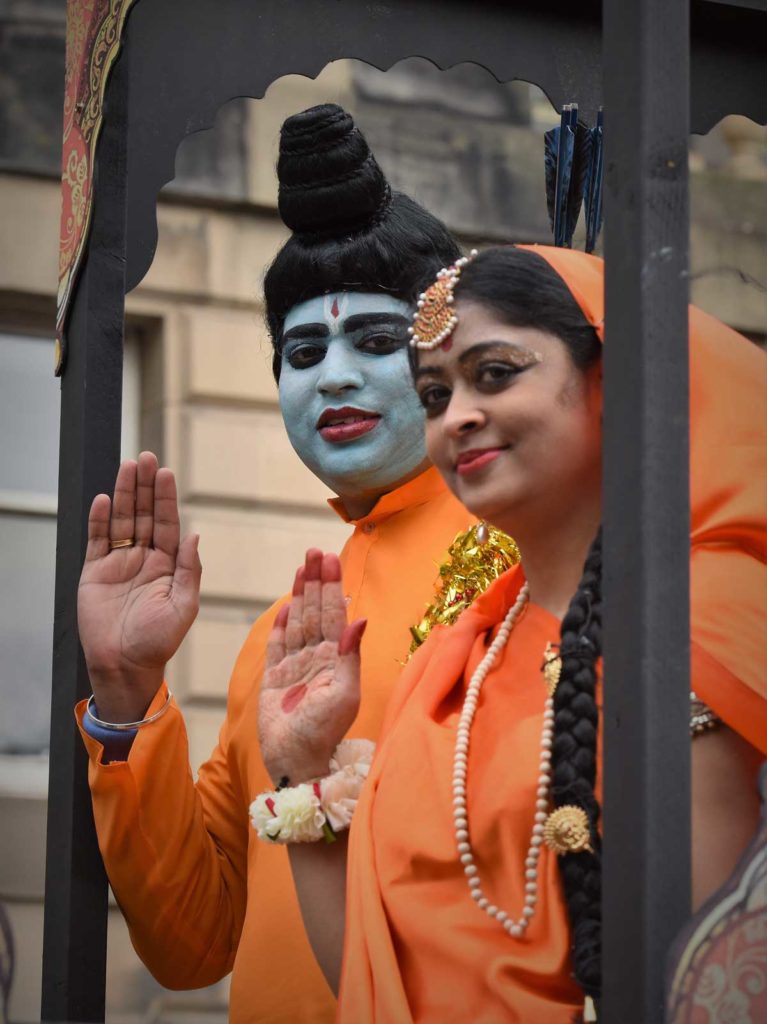 The Hindu epic, Ramayana, recounts Prince Rama and his wife Sita being banished from his father’s kingdom. The Prince’s cunning stepmother sent them to the forest so that her son could inherit the kingdom instead.

But this forest was home to the Demon King Ravana of Lanka (modern day Sri Lanka), who had ten heads and twenty arms and who wanted Sita for himself.

Ravana planned to kidnap Sita by placing a beautiful deer in the forest. When Sita spotted the deer, she asked Rama to capture it but, once he was out of sight, Ravana abducted Sita in his flying chariot.

When Rama returned, he did not find his wife but a piece of her jewellery. He learned of her kidnapping by the trail she had left behind. As he searched the forest, he came across Hanuman, King of the Monkeys. Upon hearing of Sita’s disappearance, Hanuman pledged his army to help find her. 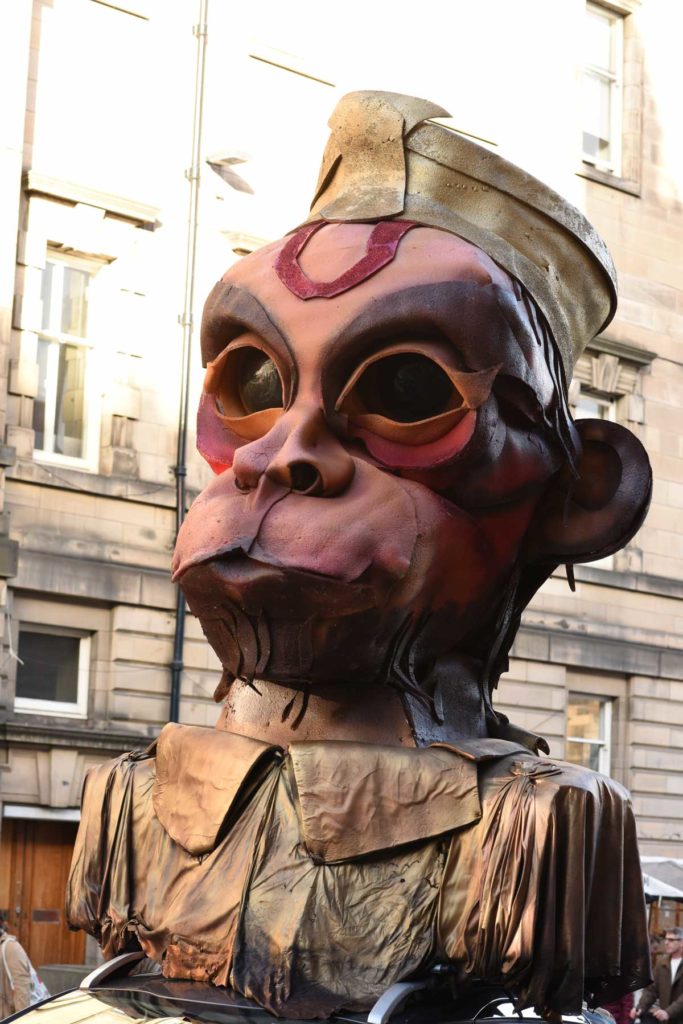 Celebration of Hanuman as part of the Edinburgh Diwali festivities along The Mound in 2018. Credits: Hermann Rodrigues, Broon Scots Project

After some time, Hanuman located Sita on the island of Lanka and with help of the army of monkeys they built a bridge over the water. A mighty battle was fought, which ended in Rama killing the Demon King Ravana.

With this victory, Rama and Sita made their way home and the people guided them by lighting  in their homes and along the streets. 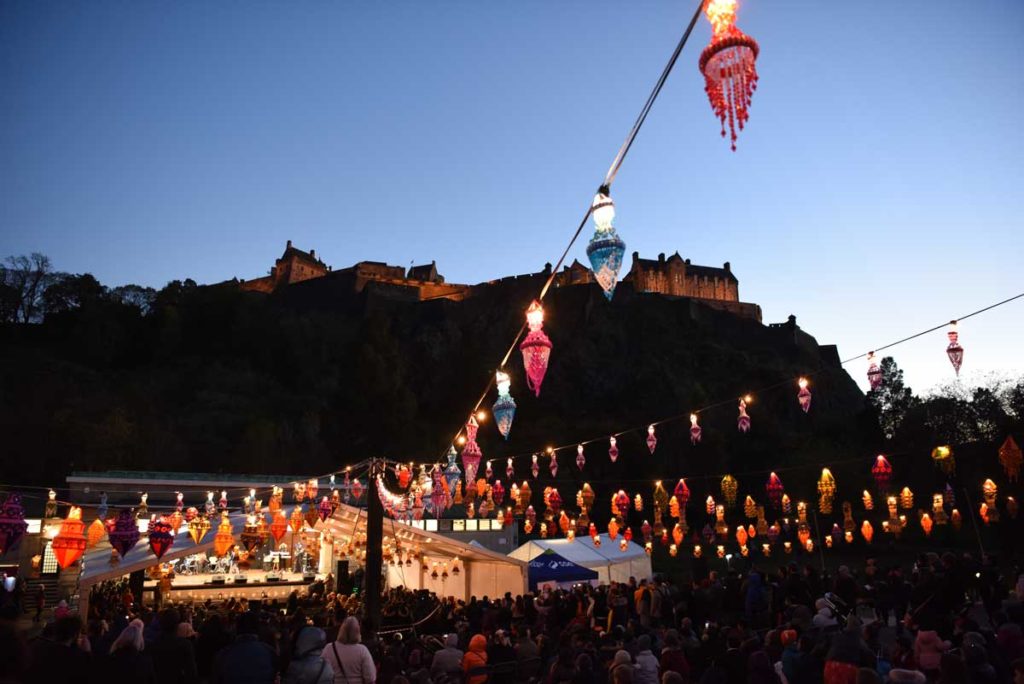 On the day of Diwali, places of worship, households and various organisations light ‘diyas’ in every room as night falls. After’ puja’ (sermons or hymns), people come together to feast and celebrate. Credit: Hermann Rodrigues, Broon Scots Project

A history of celebration

For the first families who settled in Scotland, celebrations for Diwali and other religious dates would have taken place in their homes and as a family. Lighting diyas, performing pujas (sermons or hymns) and eating a special meal was a humble affair.

But with the small number of South Asians settling in the 1950s and 1960s, communities formed. Gatherings began to take place in family’s front rooms and led to the unlikely creation of a place to worship.

These domestic spaces became a place to celebrate festivals and, in some cases, regular prayer. Even the first Gurdwara set-up in 1954 in Glasgow was a top floor tenement flat! 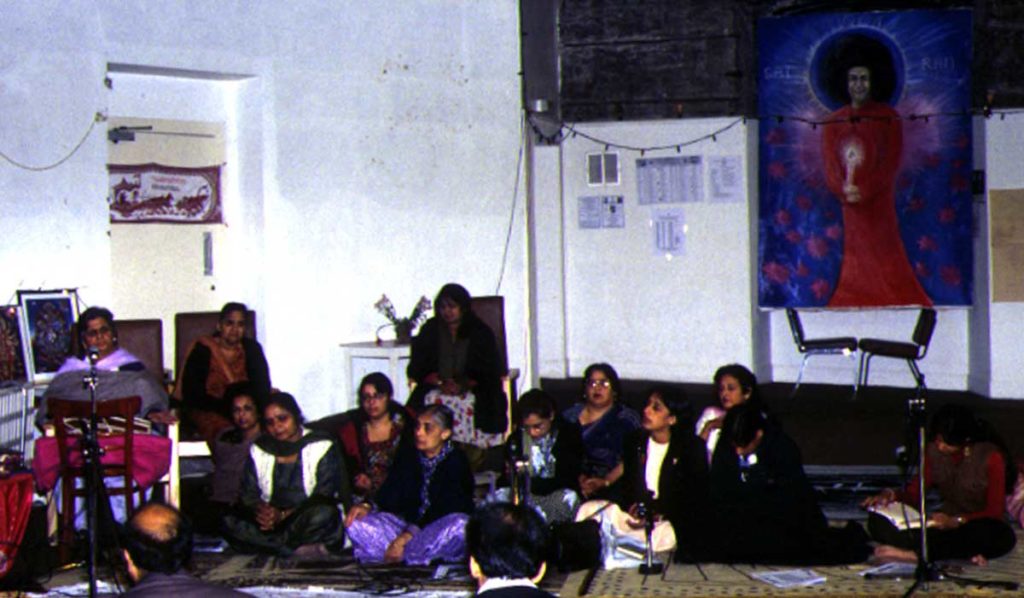 Hindu communities would gather in homes on a weekly basis to perform a puja before the establishment of the first Mandirs (Hindu Temples). In Leith, a disused church was converted into a Hindu Mandir to serve Edinburgh’s growing Hindu community, seen here in the 1990s. © City of Edinburgh Council. Licensor www.scran.ac.uk.

As early as the 1960s, members of the Indian Students Union and Pakistani Students Union would come together for festivals in Glasgow. As the communities grew, the big occasions moved into rented rooms in Burgh and Town Halls.

Since the late 1970s, children growing up as Hindus in Scotland will have performed in one of the many dances, plays portraying Rama and Sita or musical recitals that have continued as part of Scottish Diwali celebrations in these spaces. 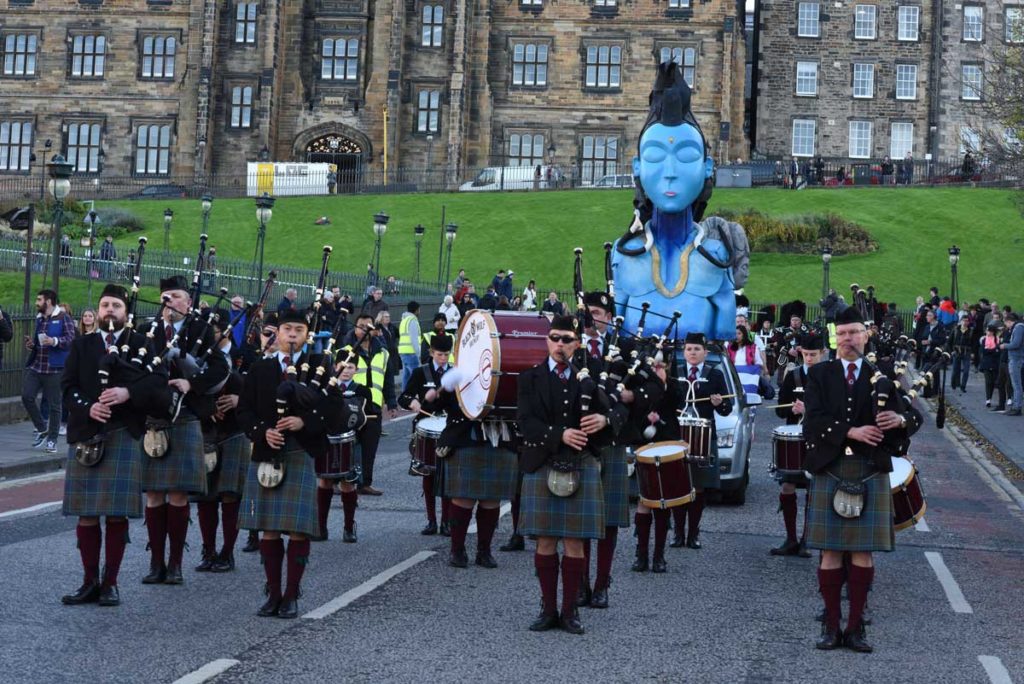 In more recent years, Scottish celebrations have included processions of effigies alongside bhangra dancers and bagpipers.

2020 has changed a lot of our practices this year. Temples will be altering the way they celebrate the festival of light and many people, their pujas will take place within their homes. Some might make traditional sweets like barfi and gulab jamun to give as offerings and later devour with their meals. 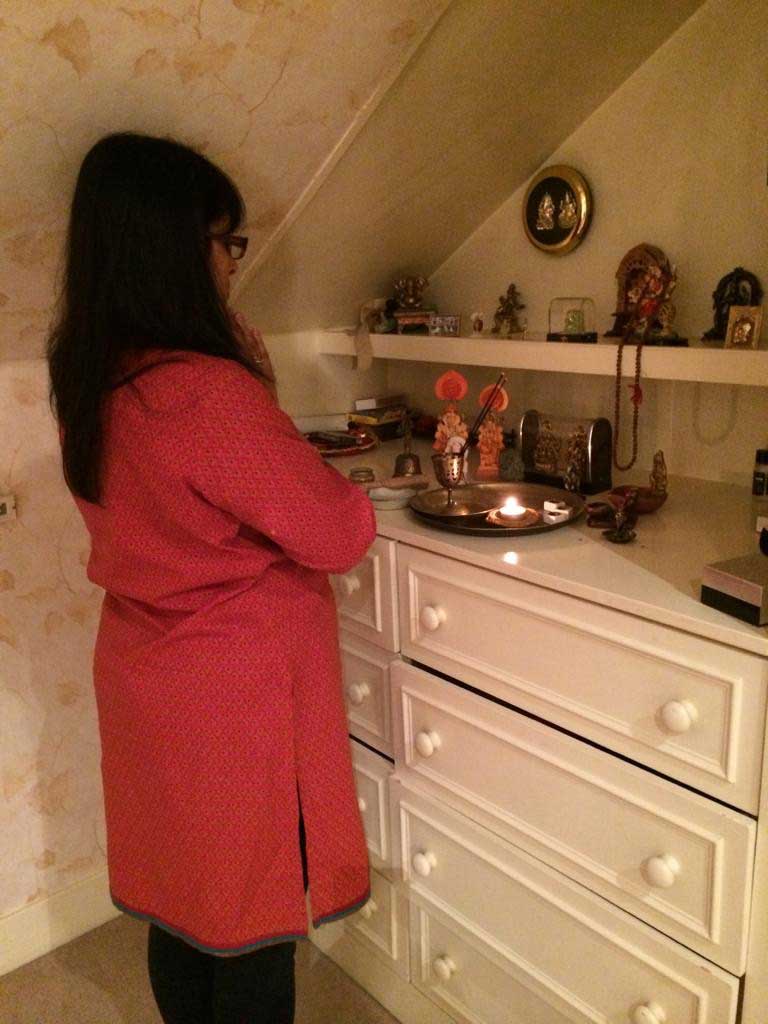 Within Hindu households, there is often an area for a shrine or Puja area, like the one seen here. Credit: Puravi Kumar

One thing that won’t have changed is how we decorate our buildings and homes for Diwali with Rangoli.

Patterns are placed on the floor using rice, sand or flowers to create geometric shapes or images of deities. Most importantly it is colourful – Rangoli comes from the Sanskrit rangavalli which means colour. This tradition has continued amongst the Scottish community and can be found along porches and hallway entrances around the time of the Festival of Light. 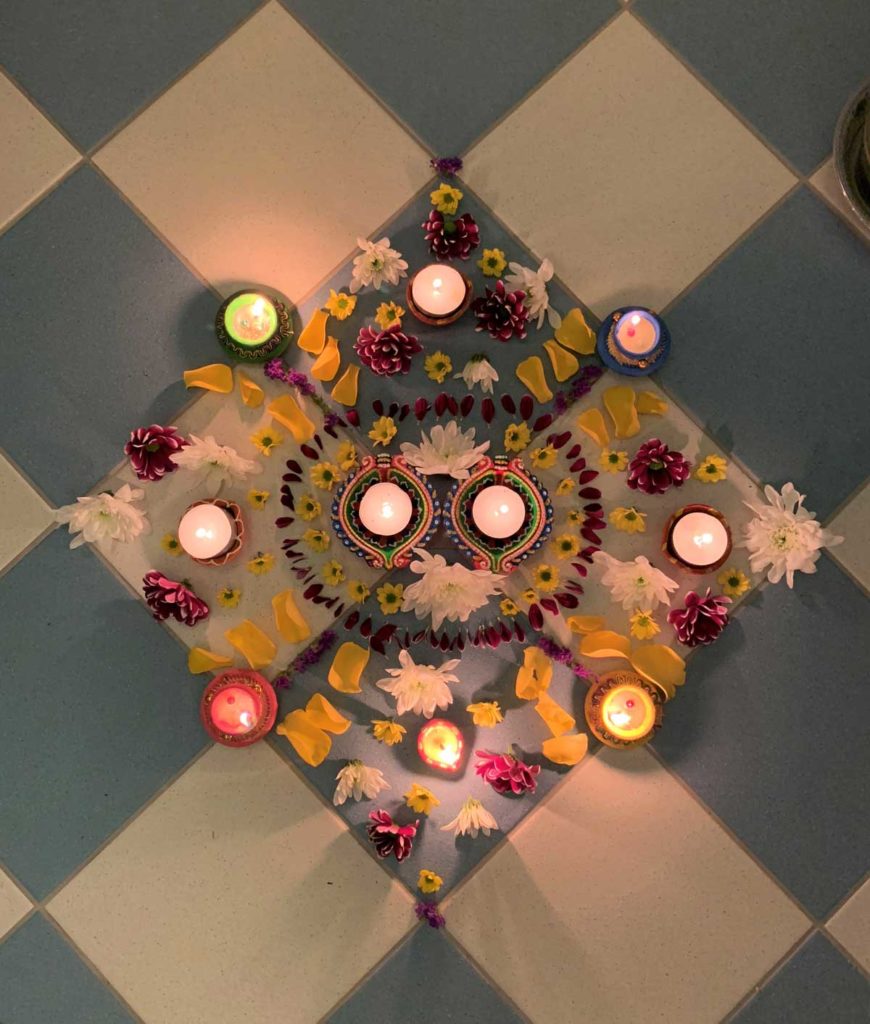 Lighting diyas and Rangoli will be the main signifiers of Diwali this year.

If you want to make your own Rangoli patterns, follow these instructions:

Or follow this video to make a paper version.
As the days get shorter, the Festival of Light will brighten a lot of homes over the coming days. There will still be a sense of togetherness and hope, and without doubt there will be thousands of digital gatherings to celebrate with friends and family.

Puravi is the Survey and Recording Graduate Trainee within the Architecture and Industry team. Her role involves investigating various sites and buildings around Scotland to understand their background and history. Puravi’s interests include learning about communities and their relationship with the historic environment and more recent histories such as the South Asian communities in Scotland. View all posts by Puravi Kumar