A Century of Leith in Photos

Featuring dockers, Hibees and elephants in libraries, we head into the archives to take a nostalgic look at life in Leith during the 20th century.

A century ago this November, big changes were afoot in Scotland’s Capital.

The Edinburgh Boundaries Extension and Tramways Act of 1920 saw the city increase in size by 36 square miles and in population by some 105,000 people. The city boundaries expanded to incorporate Cramond and Corstophine to the west and Colinton and Liberton to the south.

To the north, along the wide thoroughfare of Leith Walk, the Burgh of Leith was also annexed, controversially. 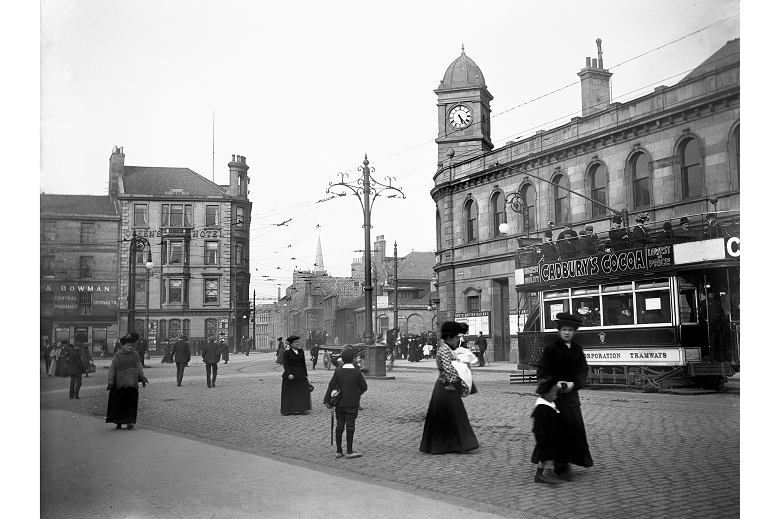 Though the fortunes of Leith and Edinburgh had been inextricably linked for centuries, Leith had been an independent burgh with its own town council since 1833.

A majority of Leithers wanted things to stay that way. A plebiscite held in 1920 returned a result of 29,891 against compared to just 5357 in favour. Banners reading “Leith For Ever. We protest against Amalgamation” were held aloft at public protests. 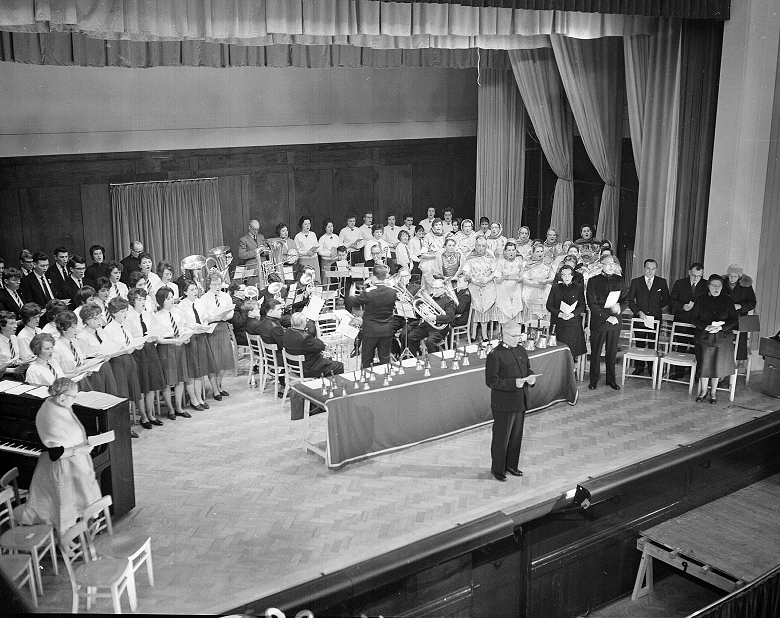 A Christmas Eve Carol Service in Leith Town Hall in 1958. The theatre inside the Town Hall was a gift from the people of Edinburgh to the people of Leith on the occasion of the amalgamation. (The Scotsman Publications Ltd, courtesy of Scran)

A Century of Change

100 years later, much has changed in Leith but it’s sense of identity and independence remains. To mark the anniversary, we’ve delved into the wealth of archive photos available on our online learning service, Scran, for a look at life in this proud and pioneering corner of Scotland over the years. 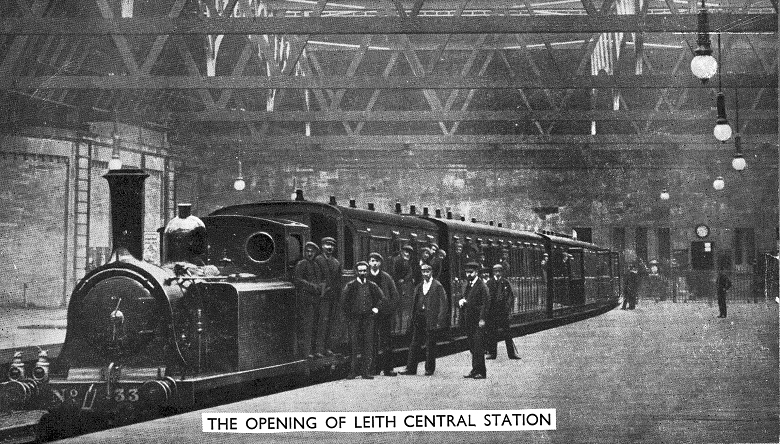 The opening of Leith Central (RCAHMS, courtesy of Scran)

Along with amalgamating with Edinburgh, Leith saw plenty of other significant changes during the 1900s.

The enormous Central Station was opened in 1903 by the North British Railway to provide a connection with the rest of the company’s railway system at Waverley Station. The journey time was seven minutes and the fare one penny, leading to the nickname ‘the penny jumper.’ 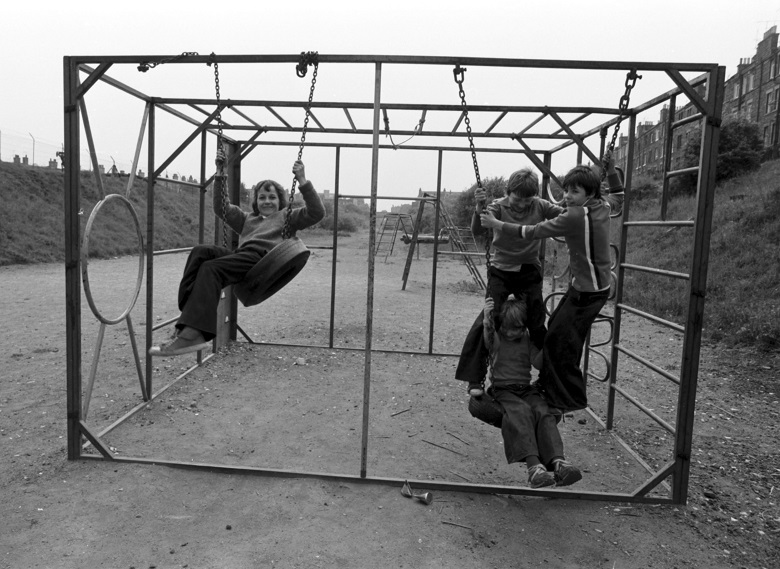 Passenger trains had left Leith by the time this photo was taken in June 1978. The play area was located on a disused railway line in the Hawthornvale area (The Scotsman Publications Ltd, courtesy of Scran)

Leith Central closed in 1952, just ahead an era of post-war redevelopment to address the problem of slum housing. 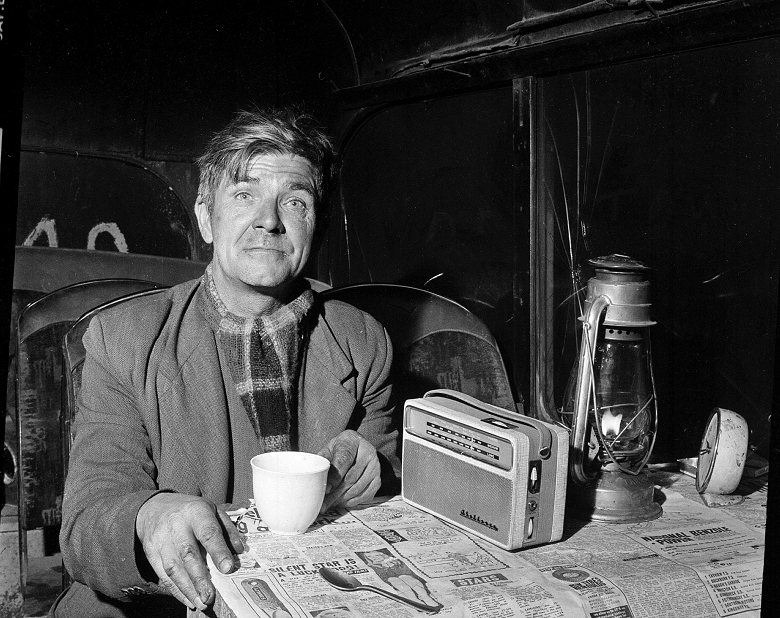 Mr John McDonald, the nightwatchman at Leith Fort Flats in April 1960. The two 20-storeyed tower blocks, Cairngorm House and Grampian House, were designed between 1957 and 1963 (The Scotsman Publications Ltd, courtesy of Scran)

The below snapshots of Leith dockers were captured in July 1969, just over a decade before over 600 years of shipbuilding in Leith came to an end with the closure of the Henry Robb shipyard in 1982. The site is now occupied by Ocean Terminal and the Royal Yacht Britannia.

Since Berwick-upon-Tweed was lost to the English in 1296 and King Robert the Bruce granted Edinburgh access to his harbour in 1329, goods, armies, monarchs and cruise ships have all landed in Leith.

The Incorporation of Master and Mariners of Leith was given the right to levy a duty on goods arriving in Leith by Robert II in 1380. Their HQ at the elegant Trinity House is now a museum dedicated to Leith’s long maritime history. 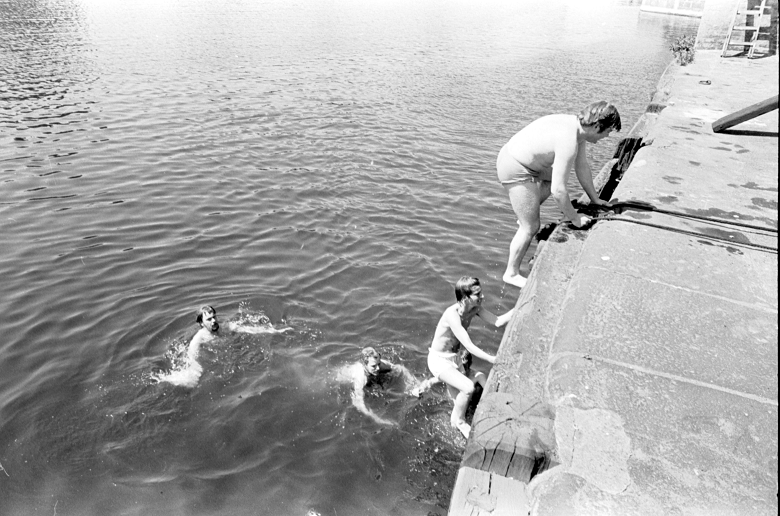 Workers take a lunchtime swim in the Water of Leith in June 1969 (The Scotsman Publications Ltd, courtesy of Scran)

Up for the Occasion

Leith is no stranger to a grand occasion, and has welcomed or waved off royalty on multiple occasions. On 19 August 1561, Mary Queen of Scots landed in Leith. It was the first time she had returned to Scotland since leaving for France at the age of five.

In 1822, George IV stepped onto a red carpet at The Shore, the first time a reigning monarch had visited Scotland for almost 200 years. The King took an open carriage for the 3-mile trip to Edinburgh. There began a series of lavish events, heavily stage-managed by Sir Walter Scott.

The archive photos above show two more modern royal visits: Diana Princess of Wales stopping to chat to children while visiting the Leith Enterprise Trust in October 1985; and crowds gathered near Leith Hospital ahead of a visit by the Duke and Duchess of Kent on 29 May 1935. 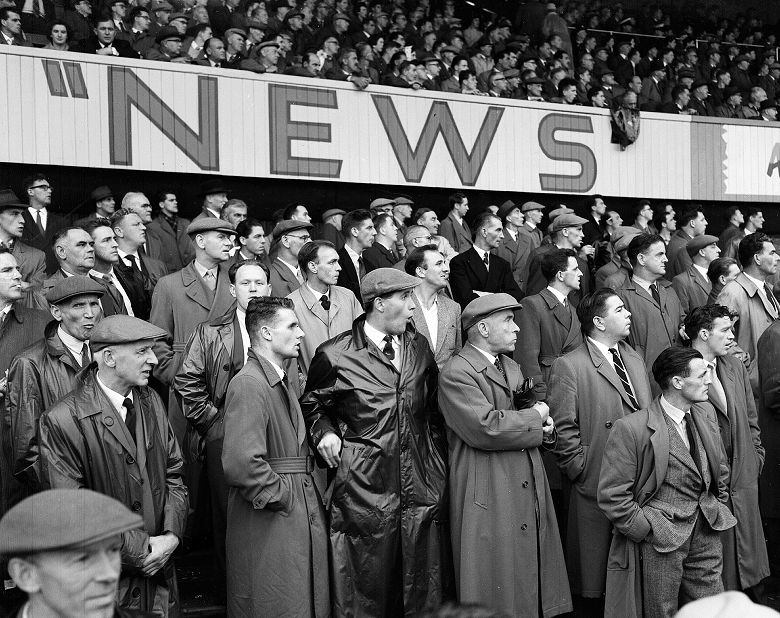 The Duke and Duchess of Kent visited The Leith Hospital in 1935 to inspect a new children’s ward. The local community had opted to raise funds for the ward in lieu of a war memorial. This is just one example of Leith’s long history of social pioneering in education and public health. 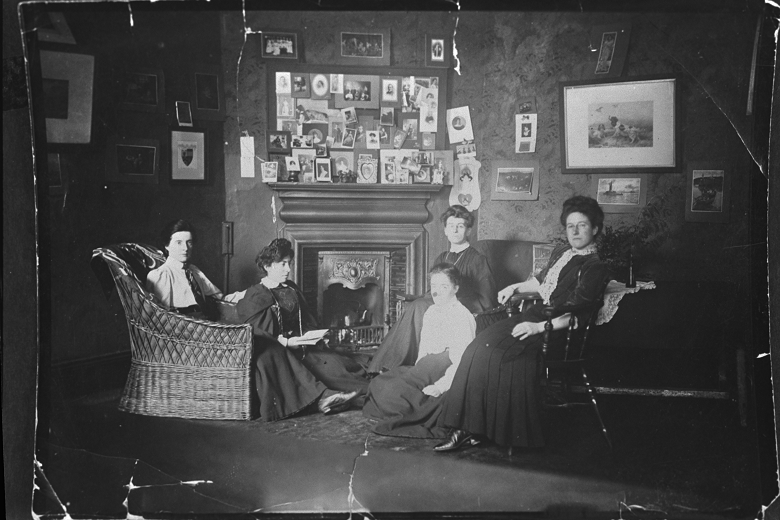 The Leith Hospital, opened 1851, benefited from a number of fundraising initiatives until its closure in 1987. Since 1907, these have included Leith Gala, Leith Pageant and Leith Festival.

You can scroll through some archive snaps from Galas, Festivals and Pageants through the years below:

Want more of Leith? Just knock on our door.. 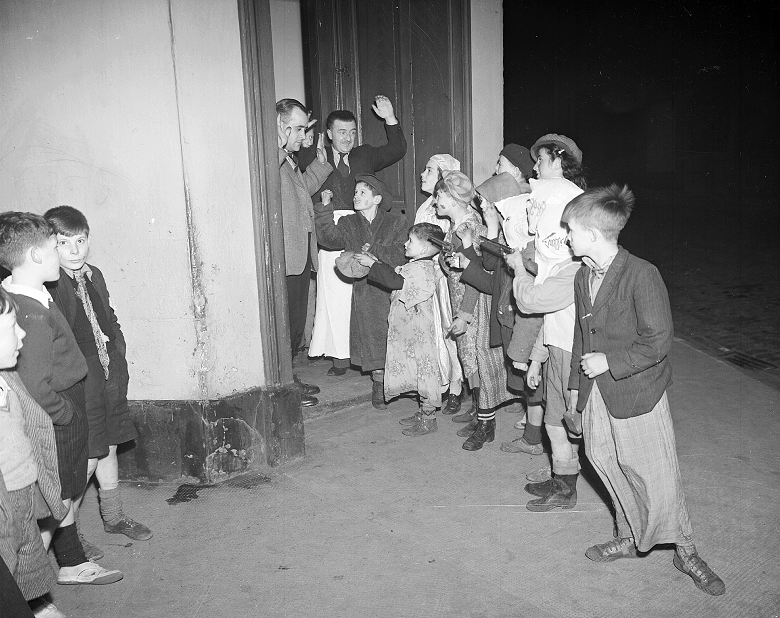 Guising in Leith in October 1955 (The Scotsman Publications Ltd, courtesy of Scran)

The amazing archive photos used in this blog are from Scran, our online learning service. It contains over 400,000 images and media from museums, galleries and archives from across Scotland and beyond.

There’s LOADS of photos of Leith (and other areas!) to explore – just enter your search on the Scran website. 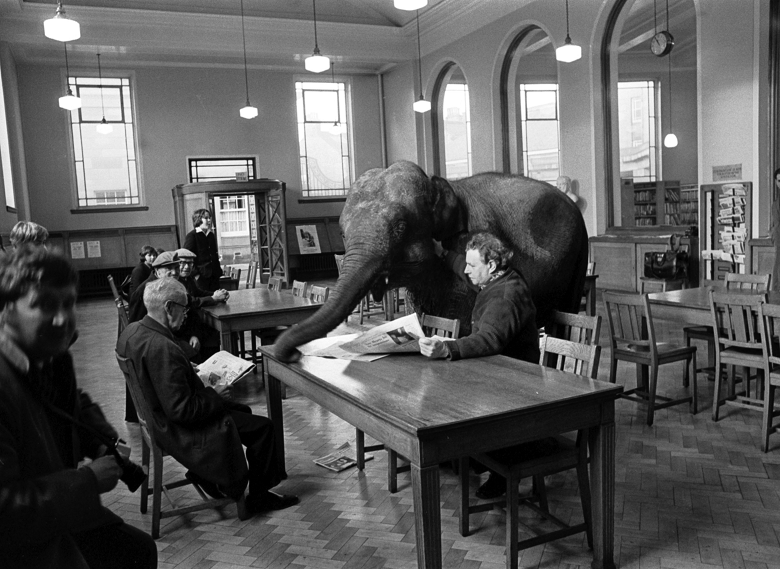 Indras the elephant at Leith Public Library in January 1976 as part of a campaign to remind people to return their books (The Scotsman Publications Ltd, courtesy of Scran)

There’s more stories of Leith on the blog including a chance to discover the Treasures of Trinity House or relive the dramatic episode when pirate John Paul Jones tried to attack Leith!

A timeline, interactive map, guidebook and many other resources are available from Leith Local History Society.

What are you waiting for?! 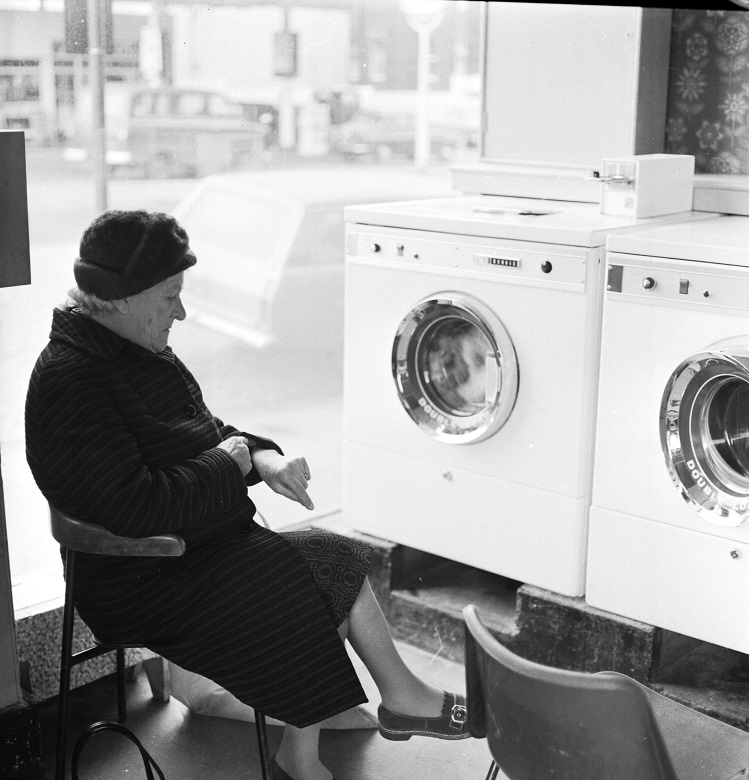 Checking the time in a launderette on Easter Road in January 1974 (The Scotsman Publications Ltd, courtesy of Scran)