Is this prehistoric rock art the “real deal”?

How do you know whether a carving on a rock is 40 years old, 400 years old or even 4,000 years old? Join Dr Tertia Barnett for a behind the scenes look at how to authenticate prehistoric rock art.

We were really excited when Hamish Fenton contacted us at the Scotland’s Rock Art Project about his discovery of animals carved inside an Early Bronze Age burial monument in Kilmartin Glen. To be honest, I was also rather sceptical. Natural hollows and fissures in the rock can often look deceptively like animals or human faces. However, Hamish had been able to take some impressive photos and make a digital 3D model of the marks he’d seen. Once we saw these, there was absolutely no doubt. Two of the images clearly represented stags with fine branching antlers. We could also make out two, possibly three other animals. 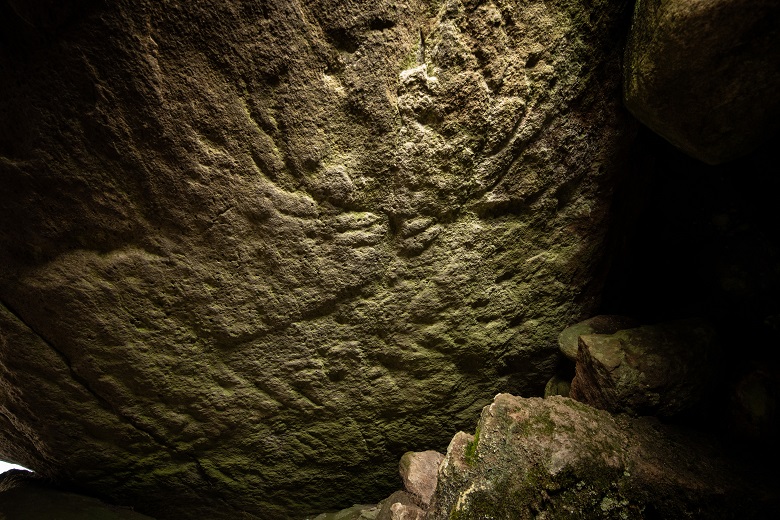 This is the most prominent carving to be seen at Dunchraigaig Cairn.

Through the Scotland’s Rock Art Project we’ve supported local communities to identify and record hundreds of prehistoric rock carvings. But nothing like this has ever been found.

Prehistoric rock art is an ancient practice dating back over 40,000 years in some parts of the world. In Scotland, thousands of rock carvings were created at least 4,000-5,000 years ago. Scotland’s rock art is almost all abstract ‘cup and ring’ type motifs carved on boulders and outcrops in the landscape. Although there are few carvings of weapons – mainly axe heads – in Early Bronze Age burial cairns in Kilmartin. Representations of animals or people are totally unknown in Scotland. 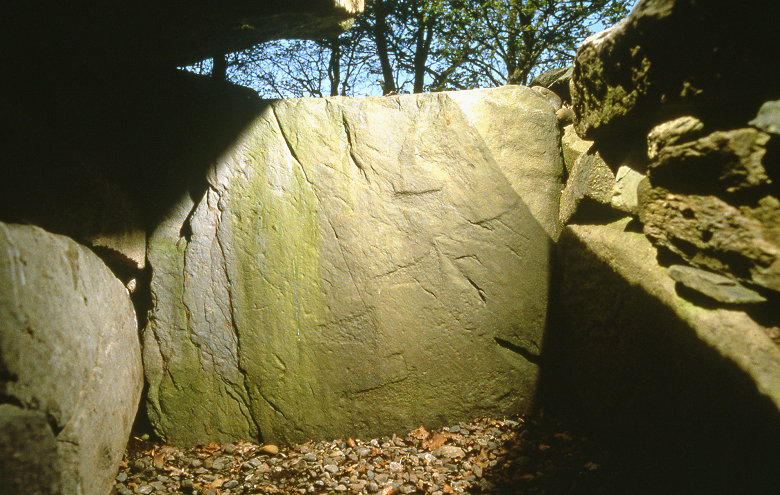 These axe-head carvings at Ri Cruin Cairn are rare examples of representative rock art from this period of prehistory.

Kilmartin is a special place with hundreds of prehistoric monuments. I have visited and worked in the area many times over the last 25 years. Each time, I’m struck by its sense of mystery and deep running history. It is perhaps not surprising that this important prehistoric landscape still holds secrets, such as these unique animal carvings. But are the carvings genuinely prehistoric? 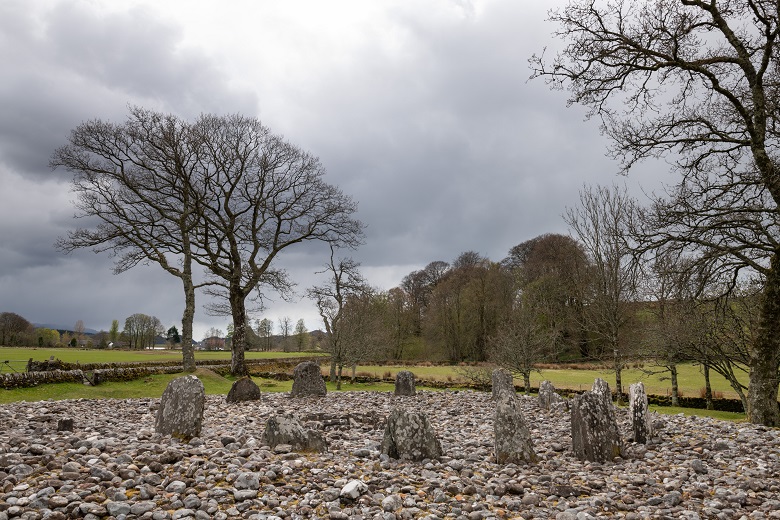 Temple Wood Stone Circle is one of many prehistoric sites in Kilmartin Glen. This stone circle is a complex ritual and funerary site that was in use for more than 2,000 years

We were desperate to examine the carvings, but lockdown restrictions prevented us travelling beyond Edinburgh.

Luckily, our colleagues from the Digital Documentation and Innovation Team were in a position to visit the site in December 2020.  They created a high-resolution digital 3D model of the carved rock surface using a structured light scanner. 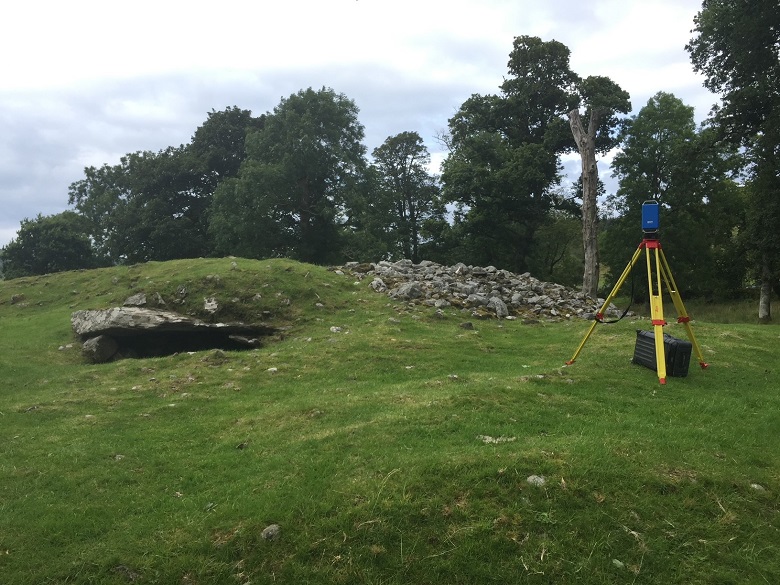 We spent the next six months scrutinising their 3D model with a range of digital enhancement techniques. This revealed an amazing amount of detail, including possible traces of other carvings beneath the stags. We could also clearly see tool marks in the two stags where a hard implement, probably a stone, had been used to shape the animals by repeatedly striking the rock surface. 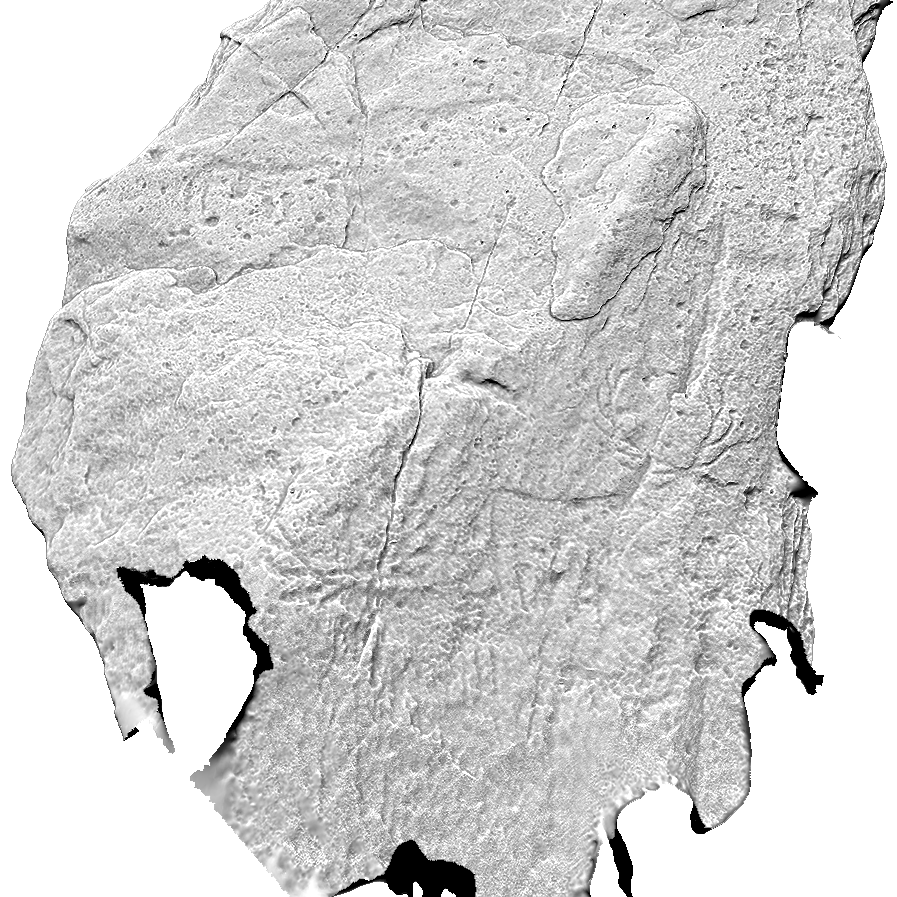 This 3D model was developed from the scans captured by the HES Digital Documentation team.

We also researched the history of the cairn where the animal carvings were found. Could this context provide more clues about their date and authenticity?

The images are on the underside of a massive capstone forming the roof of an Early Bronze Age burial chamber, or cist. This, in turn, is buried beneath a large circular stone cairn.

We know the rough date of the cairn’s construction from artefacts recovered during excavations in the 1860s. These included a type of pottery known as Food Vessels which are typical of the Early Bronze Age (c.2,200-1,800 BC/4,200-3,800 BP).

Burnt and unburnt remains of up to ten individuals were found in the cist during the excavations. Sadly, no organic material has survived to enable precise scientific dating. 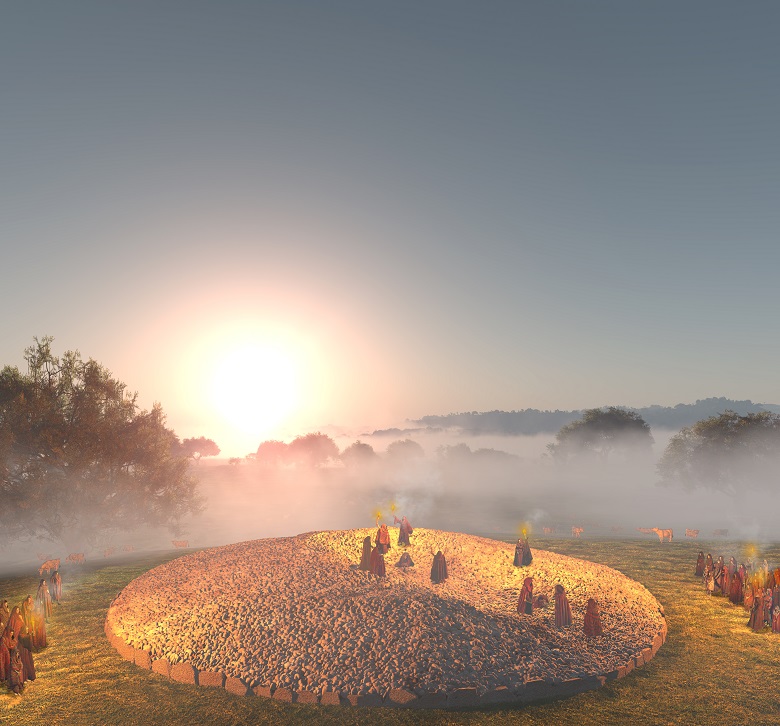 An artist’s impression by Dr Aaron Watson, who works as Interpretation and Engagement Manager at Kilmartin Museum, shows a new cist being inserted into Dunchraigaig Cairn.

Could the carvings have been made during or after the 1860 excavations? Unfortunately, additions of graffiti to historic monuments isn’t that uncommon.

Our investigations confirmed that the capstone had not been removed. We also noted that it would have been almost impossible to peck the images from inside the tomb.

Weathering of the animals also suggests they had been exposed to the elements for some time before the cist was built. This suggests they could have been originally carved on a previous monument or nearby rock outcrop.

All of this tells us that the carvings are at least as old as the Early Bronze Age. However, how much earlier is not clear.

Deer images in Britain and Europe

Animal carvings are common in prehistoric rock art elsewhere in Europe. Their absence in Scotland has long been a mystery.

Prehistoric deer carvings are known especially in Italy, Scandinavia and Iberia, and there are one or two possible examples from the UK. Could the Dunchraigaig deer indicate long-distance connections between Scotland and Europe 4,000-5,000 years ago? 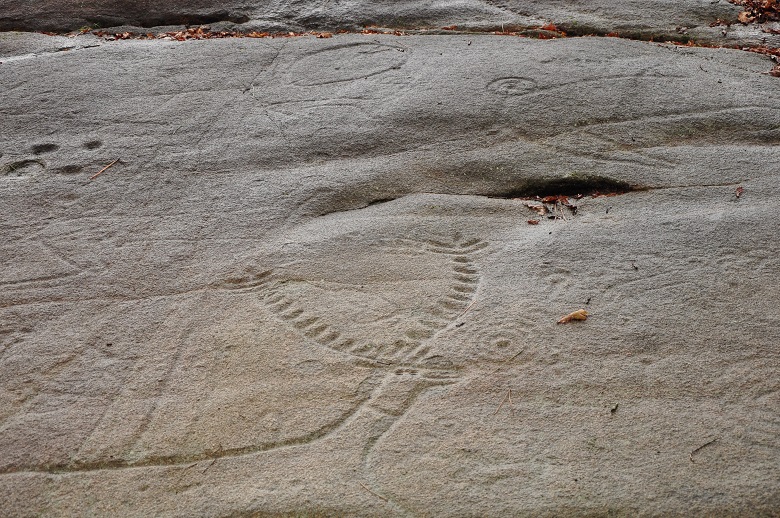 This example of a prehistoric carved deer from Campo Lameiro (Galicia, Spain) is surrounded by cup and ring marks. © Dr Joana Valdez-Tullett.

In north western Iberia, images of stags are carved alongside cup and ring motifs similar to those frequently found in Scotland. The technique used for carving the Iberian deer is also comparable to the Dunchraigaig deer, although the styles differ. Perhaps these differences represent local variations of a knowledge and symbolic meaning shared between these regions.

It was fantastic to finally be able to visit the site when lockdown restrictions eased in late April 2021. The carvings were tricky to examine as they appeared upside down, and some were partly hidden by the side-wall of the cist.

Using torches to give oblique lighting, we were able to make out the pecked antlers, bodies and heads of the two stags, and the faint shapes of the other three animals.

There were lots of little clues in the carving technique, degree of erosion, and style of the animals that meant we were confident in saying: “Yes! They are definitely prehistoric!”

Being able to spend time squashed (uncomfortably) inside a 4,000-year-old tomb with these wonderful carvings was an incredible experience, and a rather unexpected way to end the lockdown! 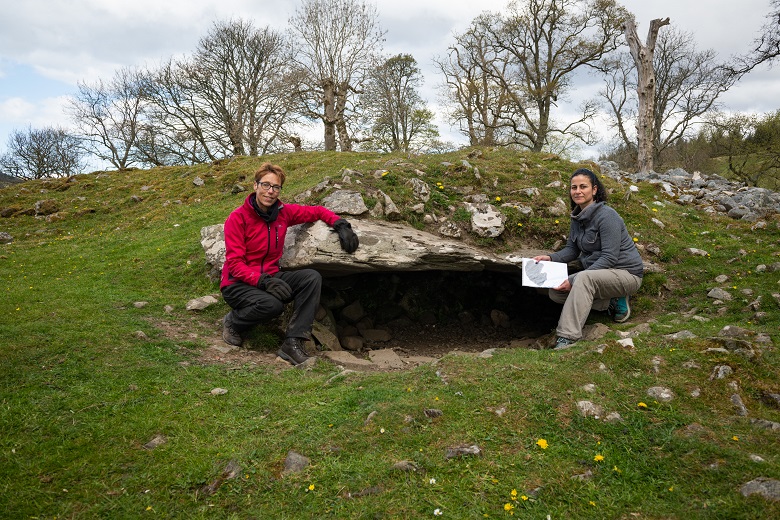 Dr Tertia Barnett and Dr Joana Valdez-Tullett from the Scotland’s Rock Art Project on site at Dunchraigaig Cairn to authenticate it.

Hold on a sec!

If you’re just about to race off to Kilmartin Glen to see the carvings, hold that thought! We’re still carrying out important investigations in the cairn. There may be even more to learn about these precious carvings. This means we’ve closed the cairn temporarily while we carry out further evaluation and put measures in place to protect the extremely rare, and delicate, ancient carvings.

For now, please enjoy exploring these carvings from home. Check out this short video about their discovery.

Want to know more? You can also download an information sheet about the Dunchraigaig Cairn deer carvings on our website. 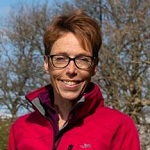 Dr Tertia Barnett is an archaeologist with over 20 years experience of recording and researching prehistoric rock art in Britain, Europe and North Africa. She is currently Principal Investigator of the Scotland’s Rock Art Project at Historic Environment Scotland, and an Honorary Fellow in Archaeology at Edinburgh University.