The Story of Scotland’s Longest Siege

In the summer of 1548, a small Scottish town became the focus of an enormous power struggle. We explore the story of the Siege of Haddington.

For 18 months, Scotland and France wrestled to expel the 2,000-strong English garrison. The English dug-in in a final attempt to secure the marriage of Mary, Queen of Scots. Read on to discover more about the longest siege in Scottish history.

The ‘Rough Wooing’ is the name given to the wars fought between Scotland and England between 1543 and 1550. Henry VIII started this conflict with the aim of forcing a marriage between his son Edward, and Mary, Queen of Scots.

If Henry was successful, Scotland and England would eventually share a ruler and Scotland would have to break off its ‘Auld Alliance’ with France. Henry, however, died before seeing the plan through. After his death, Edward VI was crowned king aged nine. Control was given to a council headed by his uncle, Edward Seymour.

England’s new ruler continued the war, and his campaign began with a huge victory. In September 1547, Seymour defeated an army of 20,000 Scots at Pinkie, near Musselburgh. 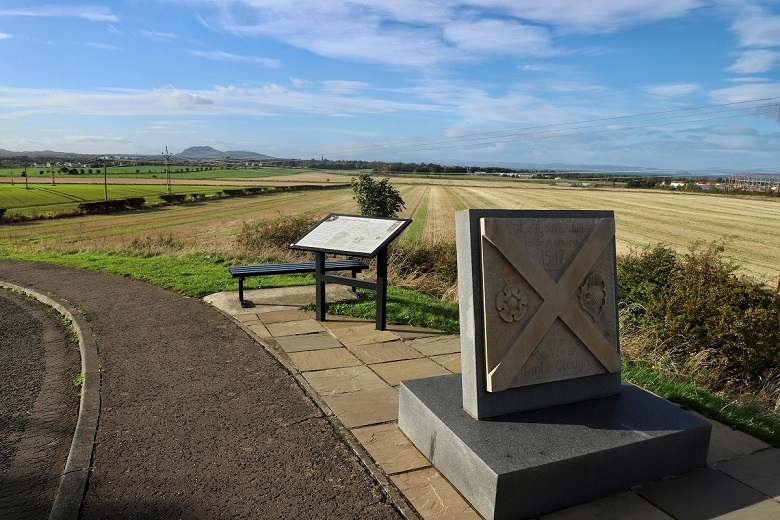 A memorial on the site of the Battle of Pinkie

Though the English crushed the Scottish army at Pinkie, they weren’t much closer to their aims. Seymour realised victory on the battlefield wasn’t enough, so devised a new plan.

The idea was to build several forts across the east of Scotland, creating an English occupation. English soldiers could use them to ride out into the country and, with a mixture of fear and reward, convince the locals that marrying their Queen off was the right idea.

Nestled in East Lothian, Haddington was the crown jewel of the occupation. Lord Grey of Wilton, English hero of the battle of Pinkie, was appointed as captain of this flagship fort. 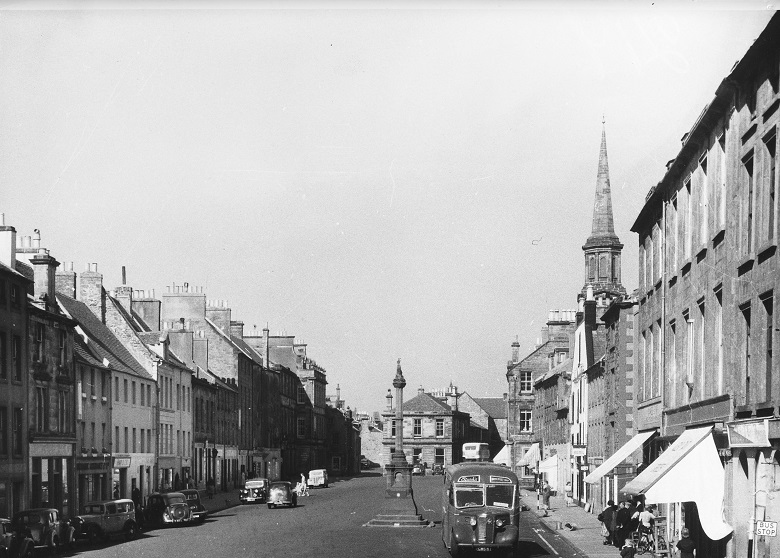 On Christmas Day 1547, two French galleys landed at Dumbarton Castle. Fifty French captains disembarked. They dressed in fine velvet coats, carried swords, and wore tufts of feathers in their morion helmets. These were the experts of war sent to help Scotland fight back after Pinkie. They arrived with enough money to pay 10,000 Scots for a year, courtesy of the Pope.

But much more was on its way. 6,000 more French were waiting for a fair wind to sail to Scotland. The French weren’t the only foreign soldiers involved. Mercenaries from Italy, Germany and Spain joined the English and Scots in their thousands. Loyalty could be bought, and some Scots fought alongside the English or acted as their spies. 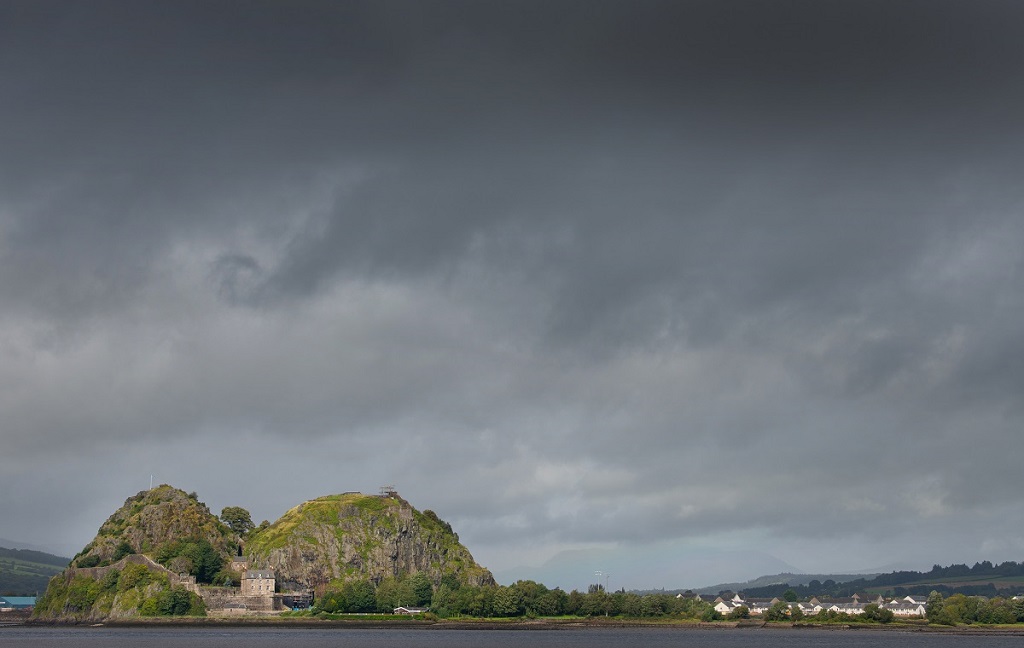 On 1 July 1548, the French army started their assault on Haddington. For the first couple of months there was fierce fighting. Both sides fired cannon day and night into each other’s camps. Haddington’s walls were battered but didn’t fall. French soldiers dug trenches, hoping to get close enough to dig under the walls and blow them up.

Men from all over Scotland travelled to join the siege. One group from Orkney were so ready for a fight that as soon as they arrived 600 of them charged at Haddington’s gate!

Though they couldn’t break the doors down, the French and Scots had a stranglehold on Haddington. Their cavalry patrolled the countryside, stopping supplies reaching the garrison. As cold, winter weather set in, living conditions became horrendous.

Food was scarce and clothes rotted with damp. To make matters even worse, the plague worked its way through the fort. Only half of the 2,000 men were fit to fight just five months after the siege began.

While Scotland had the upper hand, young Mary was whisked away to France. But England hadn’t lost yet… 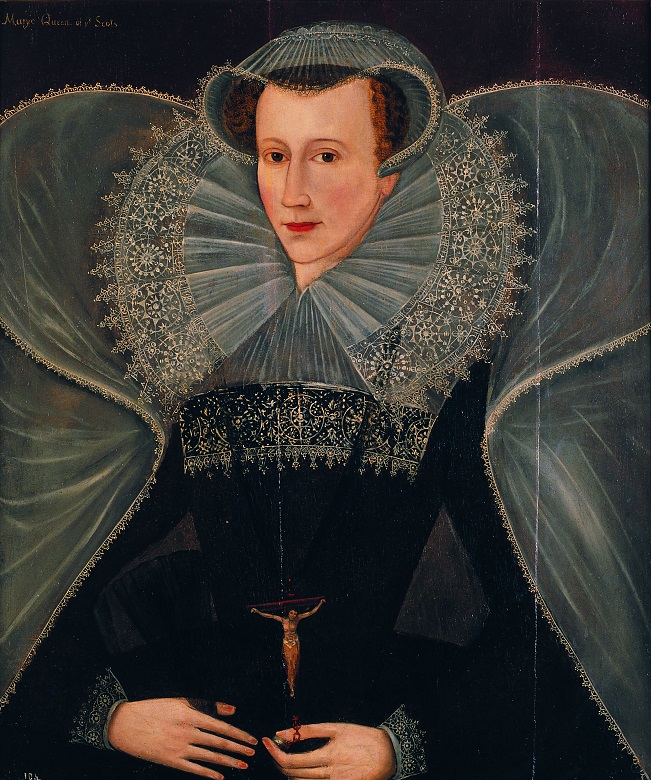 Mary, Queen of Scots. This posthumous portrait can be found at Falkland Palace (© National Trust for Scotland. Licensed via Scran)

In with the new

How then were the English able to keep Haddington? The key is in the design of the fort. It was built using the latest design of the day, Trace Italienne (Italian outline). When completed, it was only the third of its kind in Britain (after Eyemouth and Lauder) and it made Haddington extremely hard to attack.

In Trace Italienne, the high, stone walls of castles were replaced with deep ditches and low earth walls. While high castle walls would crumble, earth soaked up cannon shot with ease. At night, any damage to the wall could be repaired by a soldier with a shovel!

The other new feature of Trace Italienne were ‘bastions’ – walls which jut out at sharp angles. From the ground they would look like nothing more than an earth bank, but there isn’t a point that an attacker wouldn’t be exposed to a cannon or musket. Fort George (below), though built much later, is this design perfected. 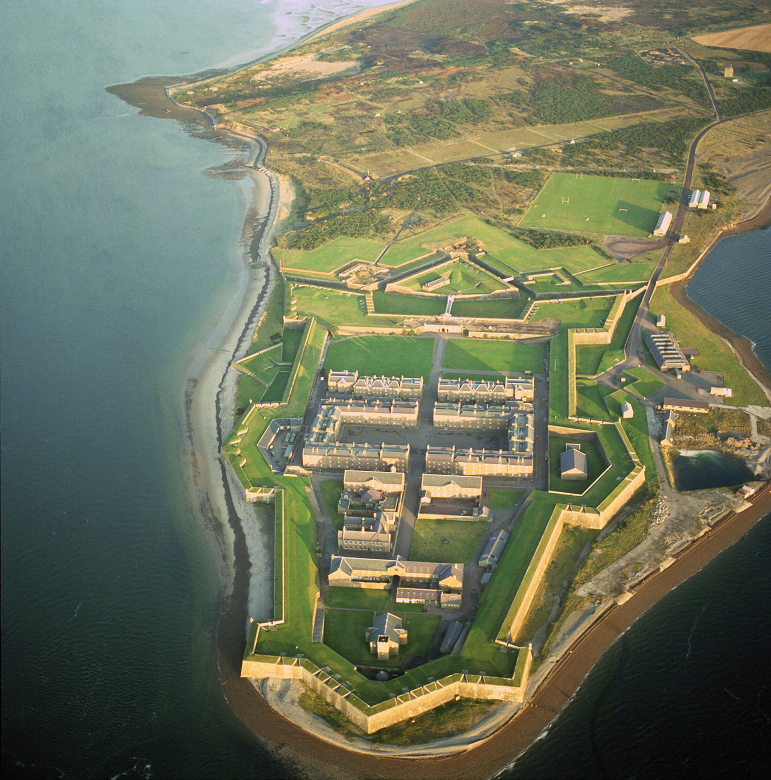 The English couldn’t pull off the occupation without local support. They relied on Scots who were willing to join them – or too afraid to refuse. Scots who joined the English pledged allegiance in an agreement called ‘assurance’. They were soldiers, spies and local guides.

There were many, complex reasons why Scots fought for the English. In some cases in the Scottish Borders, the English took advantage of old feuds between families. If you joined the English, they helped you settle old scores. Whatever the reasons, there was plenty to gain from being assured, including payment in money or property.

After the English seized Haddington, over a thousand Scots arrived to become assured. There were so many that Lord Grey doubted their loyalty. However, by April, Grey was more than happy with his Scottish allies, stating that they had “English hearts”.

Sites involved in the story of the siege 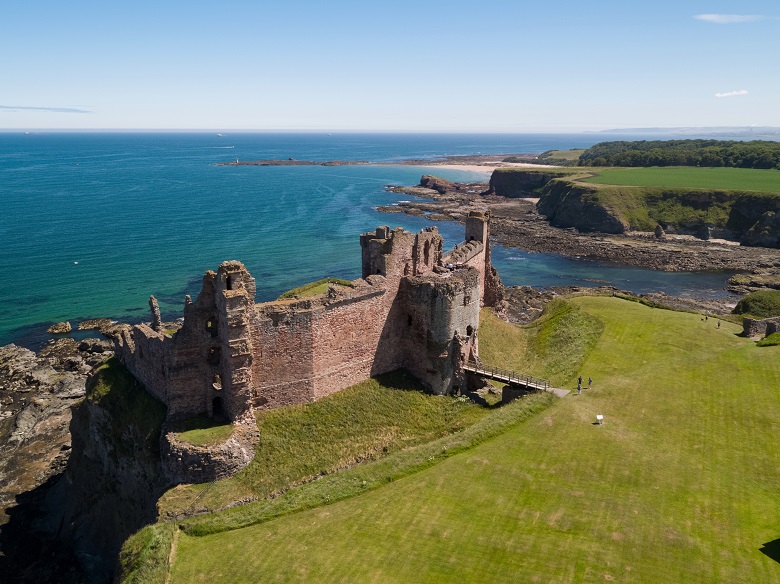 Many Historic Scotland sites played an important part in the story of the siege.

Tantallon Castle was home to George Douglas, the Earl of Angus. He had helped the English in the past, so Lord Grey wrote to him asking him to become assured. For months, Douglas played the field and had Lord Grey believe he was helping the English.

Douglas kept the game up for several months, but in October 1548 Lord Grey decided not to waste any more words. He sieged Tantallon with the help of German mercenaries. Ferocious musket and cannon fire beat the English back, so they burnt the surrounding farmlands instead. 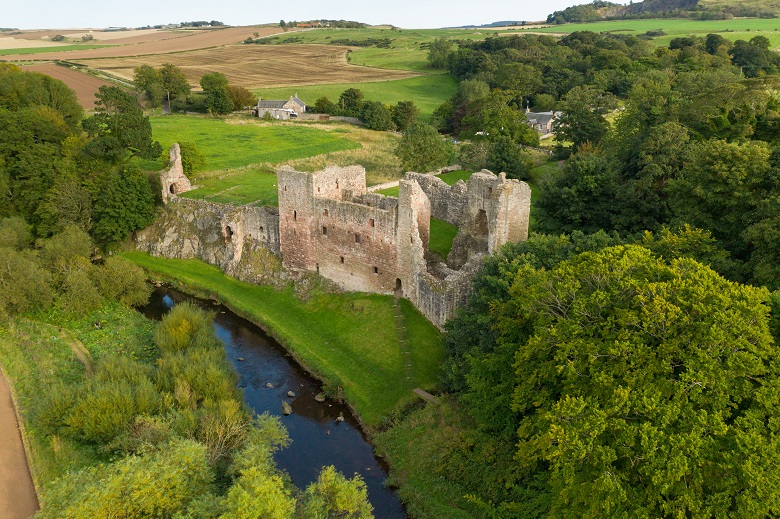 Hailes Castle by the River Tyne.

Though George Douglas refused to join the English, his uncle, Hugh Douglas, happily became assured. After the English seized Hailes Castle in March 1548, they gave it to Hugh to command as a reward. During the time of the siege of Haddington, 50 English soldiers and their horses were stationed at Hailes.

Broughty Castle was captured by the English in September 1547. Not satisfied with the castle alone, they built another fort in nearby Broughty Ferry in the area now called Forthill. Broughty’s importance was its location – a stone’s throw from Dundee, which the French and English viciously fought to control. 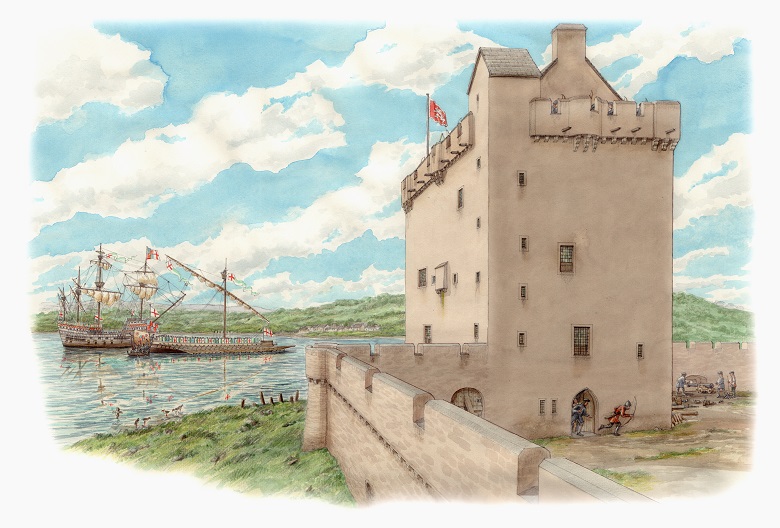 Lord Grey and Seymour truly believed that keeping Haddington above all would win them Scotland. But with Mary safely across the channel, they saw the chances of her marrying Edward VI dwindling.

Because the fort was so strong, the cost of the war kept rising. As a result, Seymour became very unpopular, and only a month after the English walked out of Haddington he was overthrown by his own lords.

Today, we can remember that for 18 months, a town in East Lothian was the centre of a major European war. However, as dynamic and dramatic this story is, it’s important to remember that real people were victims. Many families had no choice but to pick a side to stay alive. 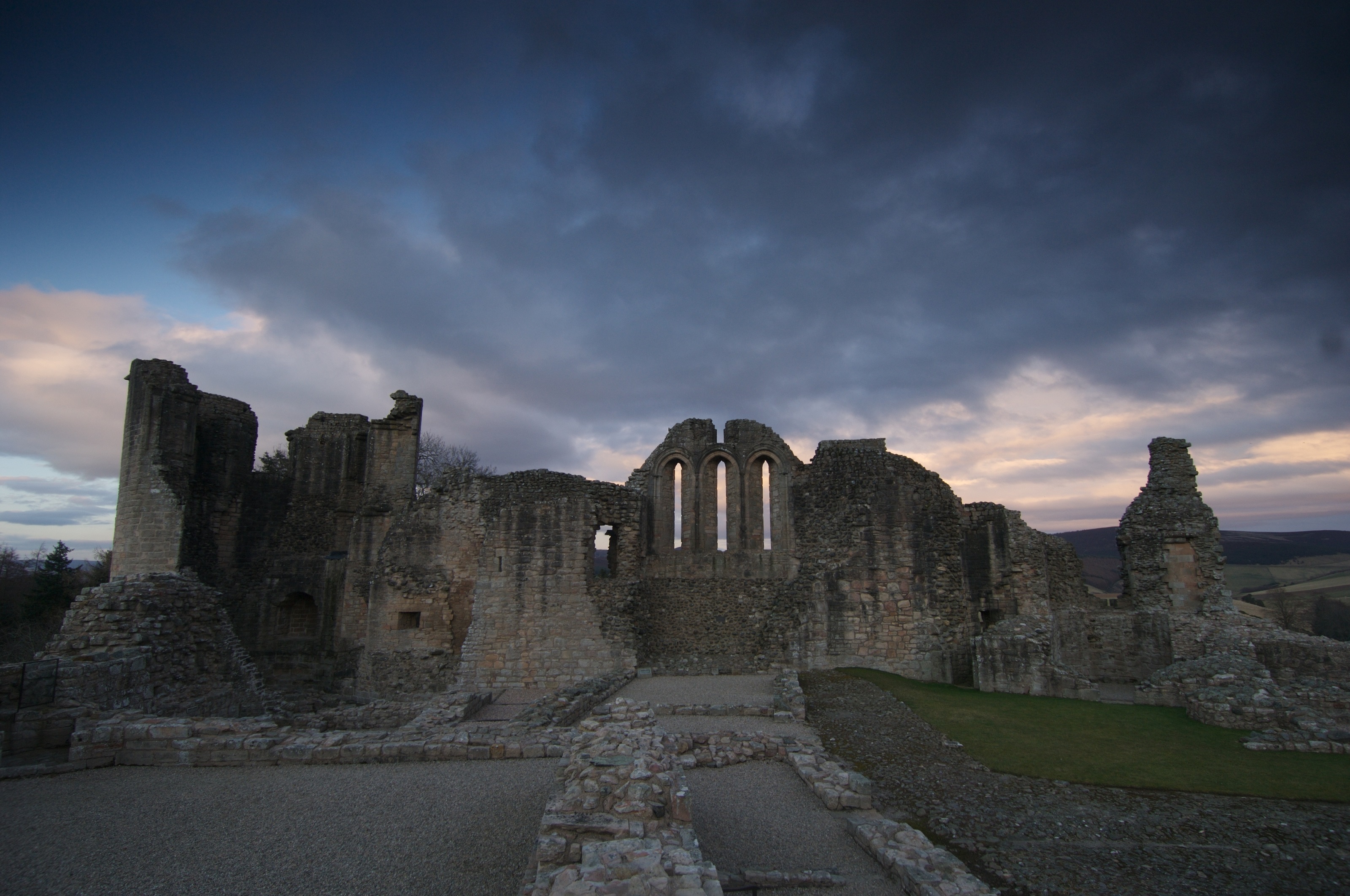 Want more stories of sieges? Firstly, stay in East Lothian to uncover the events that lead to Cromwell’s siege of Dirleton Castle. After that, head to Aberdeenshire to find out about Christina Bruce’s amazing defence of Kildrummy Castle.

And for even more terrific tales, join in with our celebration of Scotland’s Year of Stories.

Chris works as a Collections Management Trainee in Historic Environment Scotland’s Collections and Applied Conservation Team, learning to manage the 41,000 objects in our care. View all posts by Chris Upton