We delve into our collections to take a look at the ceremony and celebrations when George IV made a monumental arrival in Leith 200 years ago.

This August marks the 200th anniversary since the visit of King George IV to Edinburgh. Landing at Leith on 15 August 1822, this would have been the first visit to Scotland by a reigning monarch in over 170 years.

To celebrate the bicentenary, the Collections team at Historic Environment Scotland invite you to explore the historic landing through some of the fascinating objects in our care.

A coloured engraving by W.H. Lizars of the landing of the King George IV at Leith

As the landing point for the King’s arrival, Leith played a pivotal role in the Royal visit. Those familiar with the area will likely recognise The Shore which is depicted above by Edinburgh-born artist William H. Lizars, one of several artists who attended the event.

The fine details in his engraving allow us to identify the business names on the buildings behind the crowds, including the Old Ship Tavern, at the same spot where The Ship On The Shore stands today. The scene also shows us just how many people came to see the arrival of the King. Look out for the crowds gathered precariously on the raised drawbridge! 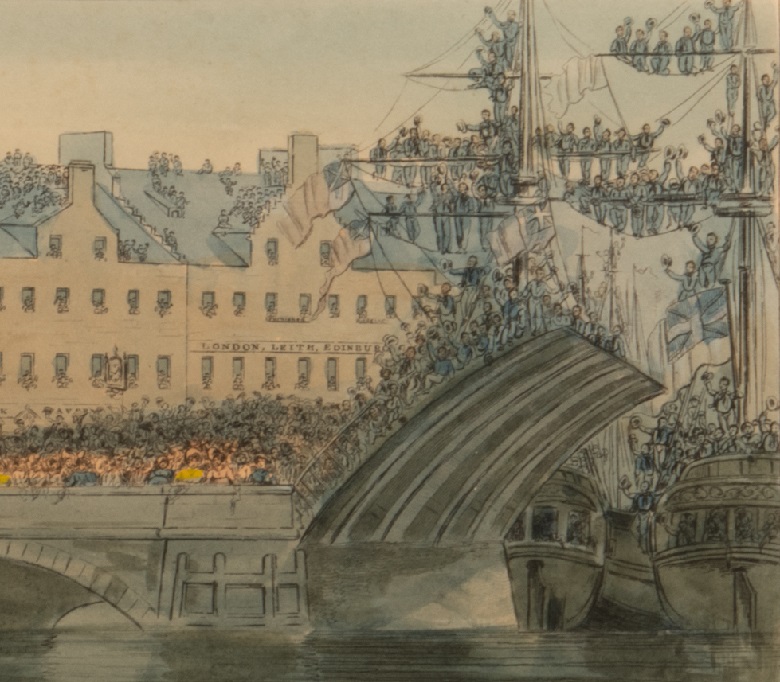 The Incorporation of Mariners and Shipmasters of Trinity House were responsible for the safe passage of the King and his party into the harbour. 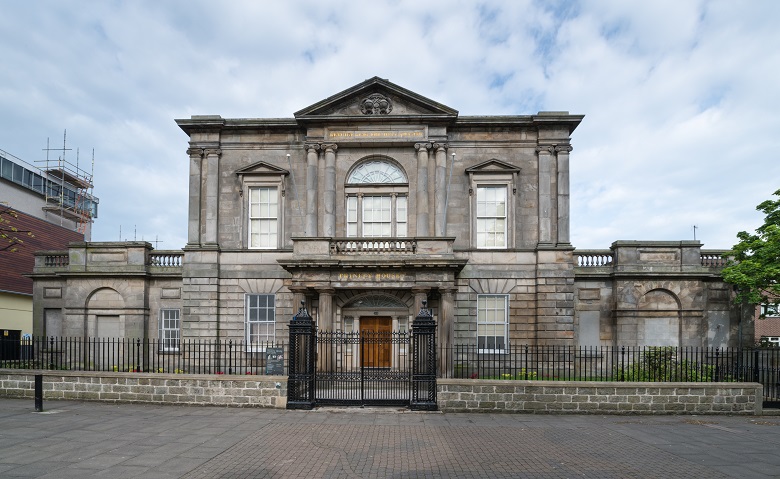 Trinity House in Leith, once the headquarters of the Incorporation of Mariners and Shipmasters, now a maritime museum

The landing was organised for 14 August. But while the Royal yacht anchored successfully at Inchkeith, the weather was considered too stormy for a safe landing in Leith that day.

Renowned Scottish writer Sir Walter Scott orchestrated the proceedings. Rather than landing at the more practical deep-water harbour in Newhaven, Leith was chosen by Scott for its historic Royal connections, citing in particular the landing of Mary Queen of Scots in 1561. To get to the shallower location, smaller barges were used instead to transport the King and his party from the Royal yacht, the King George. 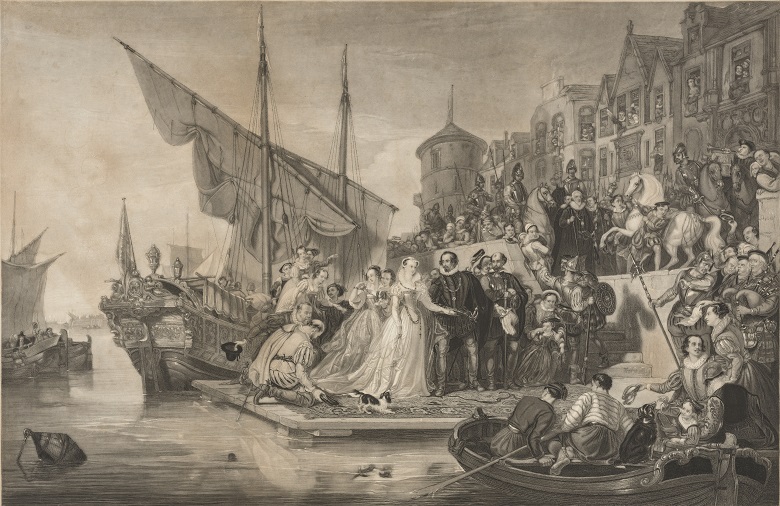 As is clear in the painted depictions of the event, the Royal landing drew very large crowds. It is believed that the visit saw some 300,000 people gathering across Leith and Edinburgh for the occasion.

A ticketed enclosure was sectioned off for a select few dignitaries of Leith, including some Members of Trinity House. A couple of these tickets survive in our collections. On the back of both is a handwritten note which entitled the bearer to ‘one bottle of sherry’. What a merry occasion! 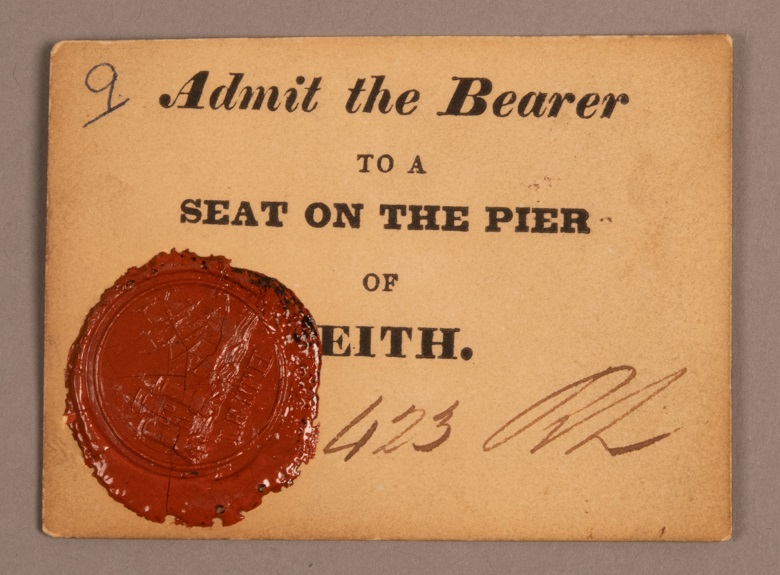 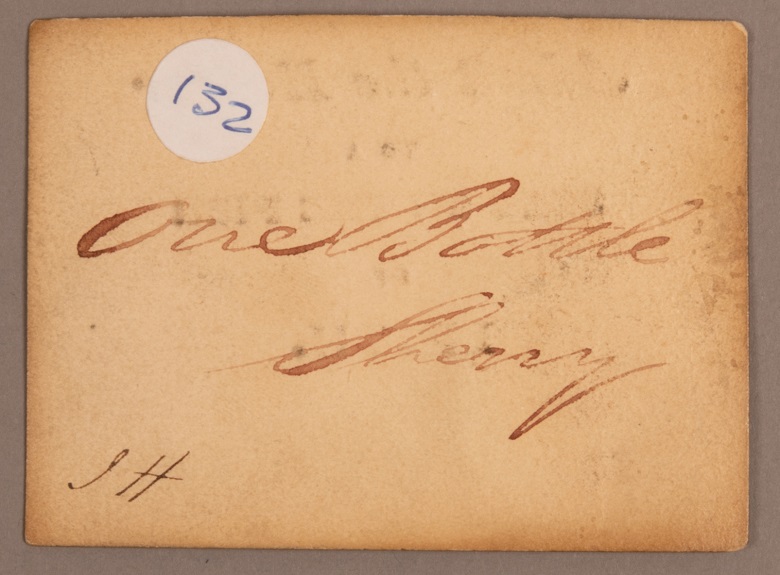 This ticketed enclosure was located in front of the tavern buildings on the Shore. Well-dressed dignitaries can be seen near the King in the below aquatint by Haddington-born artist, Alexander Carse.

Guests and spectators were advised what to wear and how to behave by Walter Scott’s anonymously published booklet Hints Addressed To The Inhabitants Of Edinburgh And Others In Prospect Of His Majesty’s Visit By An Old Citizen.

The directions could be very specific. For example, the instruction for female invitees included how many feathers to wear in their head dresses! Male dignitaries were instructed to dress in the national colours of Scotland, in a blue coat with a white waistcoat and pantaloons. 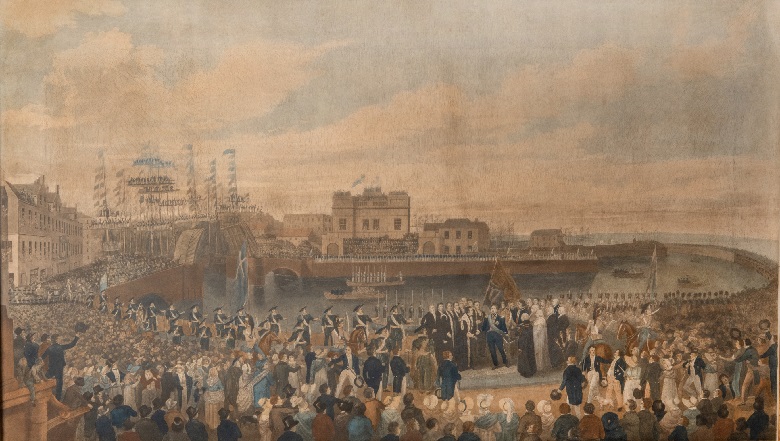 Aquatint of the landing scene in Leith by Alexander Carse

Some guests were also asked to carry a rod or baton to signify their membership of a civic body. The baton below was issued specially for the Royal visit. There are two gilded bands. One is inscribed “G IV R” (the royal cypher of George IV) and the other “Leith”.

It is thought to have been carried at the event by John Hay, a former Master of Trinity House. If you look closely, you can spot four gentlemen using batons like this one in Carse’s depiction of the scene: 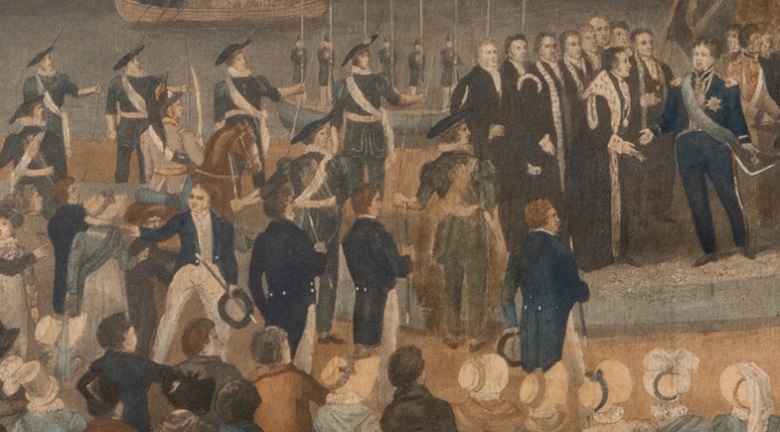 After landing in Leith, the Royal procession continued from Bernard Street and then up Leith Walk. Sir Walter Scott believed that ‘no city in Europe can boast a nobler avenue.” From here the procession crossed Princes Street and paraded down through Abbeyhill to arrive at the Palace of Holyrood House.

You can see these objects and more fascinating maritime curiosities at Trinity House’s Doors Open Day event on 24 and 25 September.

Gilly works as a Collections Manager for the Edinburgh region within Historic Environment Scotland’s Collections and Applied Conservation Team, helping to look after the 41000 objects in our care. View all posts by Gillian Conabeer