From enjoying a relaxing round of golf to enduring the fluctuating fortunes of the national team, sport is one of Scotland’s favourite pastimes. And the hundreds of sporting buildings where we spectate and play boast some of the most remarkable architecture in the country.

Art Deco lidos, brutalist football grounds and lavish clubhouses are all at the heart of the historic environment. So get your kit on and get ready to explore six of Scotland’s most unique sporting buildings…

The Hall of the Archers

Situated beside their traditional practice ground on The Meadows, Archer’s Hall has been the headquarters of the Royal Company of Archers since since the 1720s.

‘His Majesty’s Company of Archers’ was established in 1676 to “revive the ancient skill of archery”. It acted as the monarch’s personal bodyguard during George IV’s ceremonial visit to Edinburgh in 1822, a role it continues to play today. 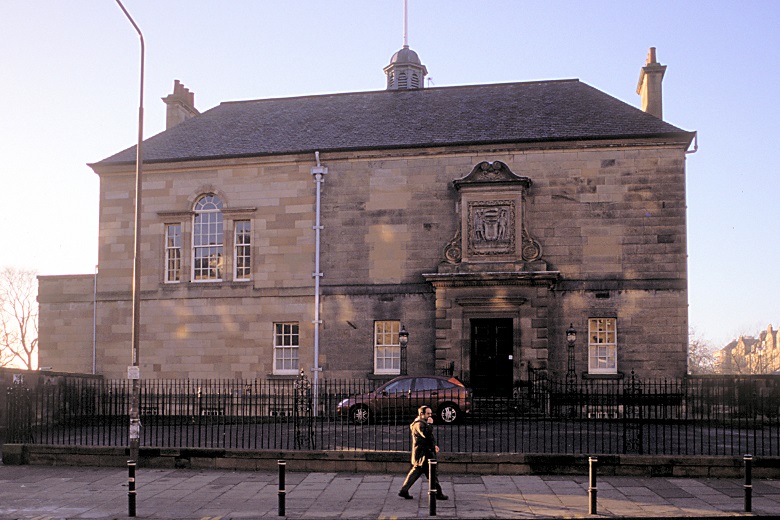 Archery had long been a popular sporting pursuit in Scotland. In 1424, an Act of Parliament demanded that archery facilities be provided for every man over the age of 12 to use. Mary Queen of Scots is said to have practised in the grounds of Falkland Palace. 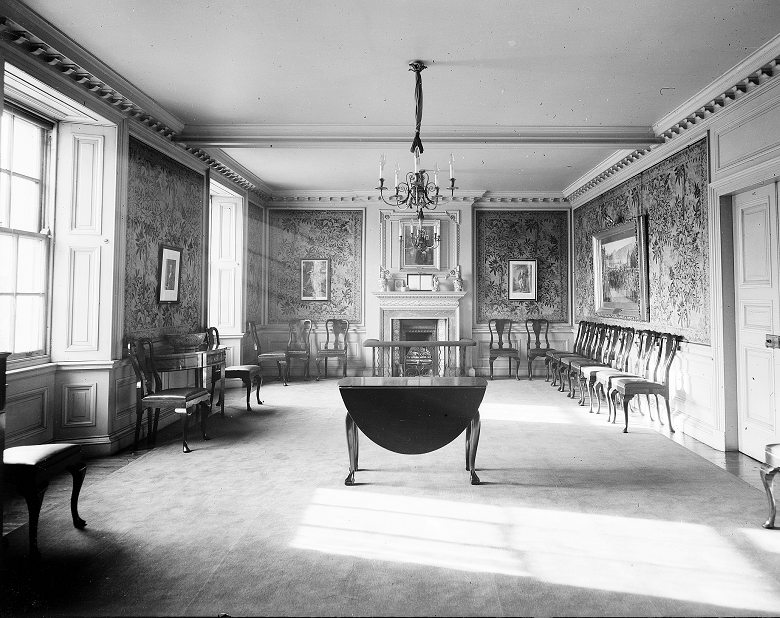 Archer’s Hall originally housed two bar-rooms, two parlours, three bedrooms and a bowling green. The Category A listed building was extended in 1899 to include a grand staircase and an ornately remodelled interior.

The Hidden Home of Curling

Visitors to the historic village of Duddingston on the edge of Holyrood Park may stumble across a curious little tower on the shores of Duddingston Loch.

The distinctive octagonal building is a curling house or curling hall, built in 1825 by eminent architect William Henry Playfair. The upper floor provided a meeting room for the Duddingston Curling Society, the lower a storeroom for curling stones.

It was also used as a studio by the Reverend John Thomson, landscape artist and minister of Duddingston church, hence its name:“Thomson’s Tower.” 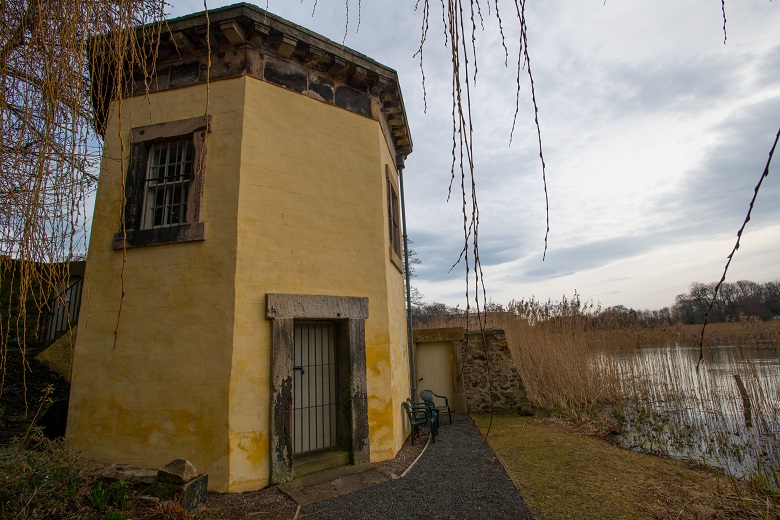 A stone discovered near Stirling suggests that curling has been played in Scotland since at least 1511. The Duddingston Curling Society was founded in January 1795. Their headquarters is one of over 2,300 sites across Scotland recorded as having been used for curling.

With many members of Edinburgh’s legal elite in their ranks, it is perhaps no surprise that the society set out the first ‘Rules in Curling’ in 1804. These rule form the basis of the modern game. 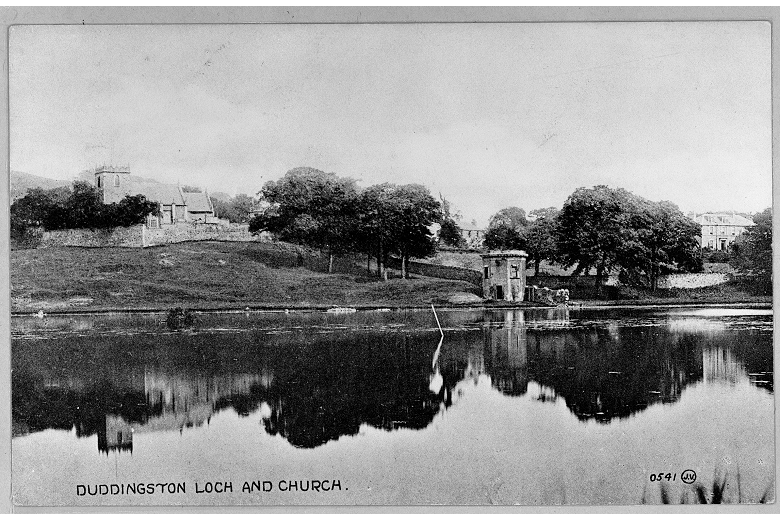 A magnificent building designed by William Adam in 1792 is the centrepiece of Chatelherault Country Park in Hamilton. It was originally a hunting lodge for the 5th Duke of Hamilton. The raised central compartment of the rear gardens appears to have been laid out as a bowling green. 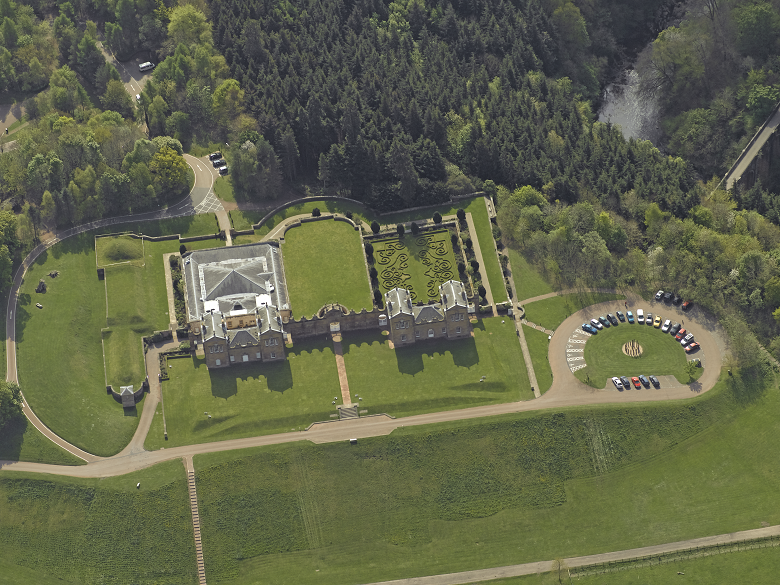 The earliest reference to bowling being played in Scotland is thought to be a report of King James IV playing “lang bowlis” in St Andrews in April 1497. Enthusiasm for bowling grew amongst Scottish nobility to the point that no prestigious house was complete without a green.

Scotland’s first public bowling green was opened in Haddington in 1662, after which bowling thrived as a popular sport. The first national bowling association in the world was formed in Scotland in 1892. At the time the country was home to at least 364 clubs.

By the twentieth century, bowling greens were recognised as focal points of Scottish communities and were often included in post-war “Homes for Heroes” housing developments. None, however, would have been as lavish as the bowling green at Chatelherault. 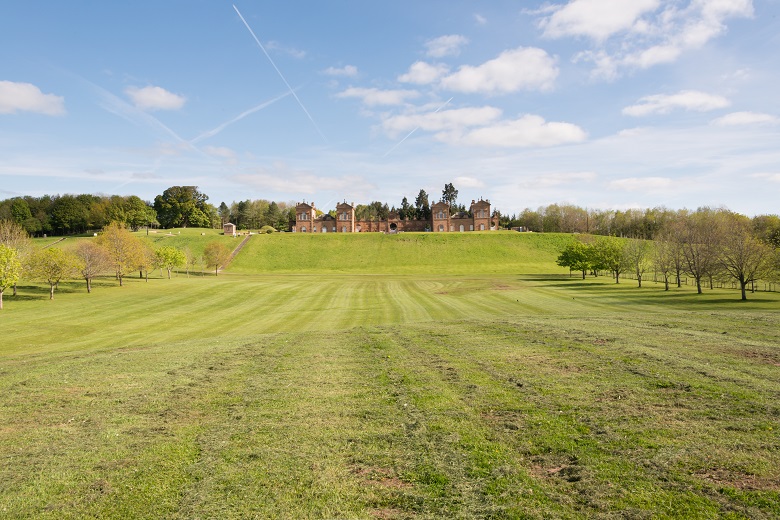 A Brutalist home for the beautiful game

Football has roots in Scotland stretching back some 600 years, despite a 1424 Act of Parliament introducing a four pence fine for anyone found to “play at the football”.

The sport as we know it today emerged much later. Scotland’s first association football club, Queen’s Park, was formed in 1867. The first international between Scotland and England was played in 1872.

It was Queen’s Park who constructed the first football-related building in Scotland. A wooden clubhouse costing £21 which was installed at their Hampden Park ground in the 1870s. We imagine it was a far cry from the Category A-listed stand found at Nether Road, the home ground of Gala Fairydean FC. 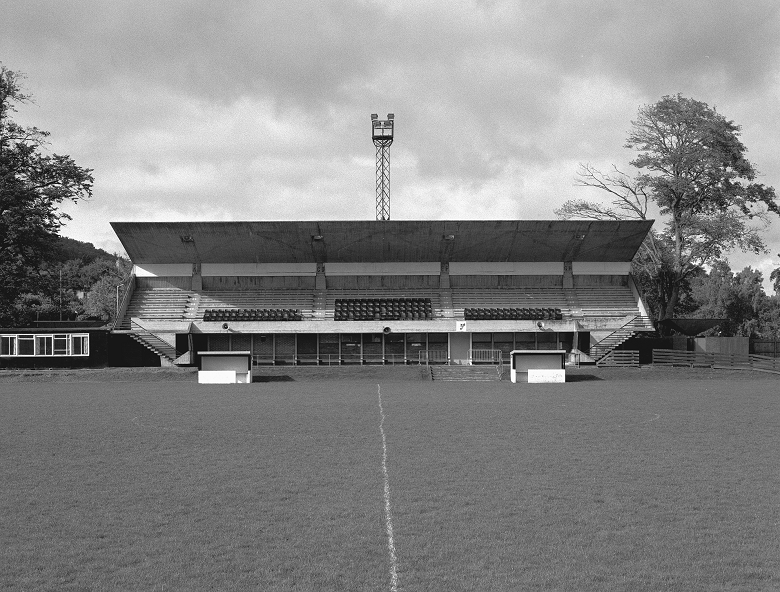 Constructed between 1963 and 1964, the 620-seat stand is an extraordinary structure made from air-entrained concrete. The seating forms a triangular wedge over the changing rooms and showers on the ground floor.

The geometric, sculptural design is the work of brutalist architect Peter Womersley. It left open the possibility for adding more stands in the same style. The turnstiles are covered by matching concrete “umbrellas.” 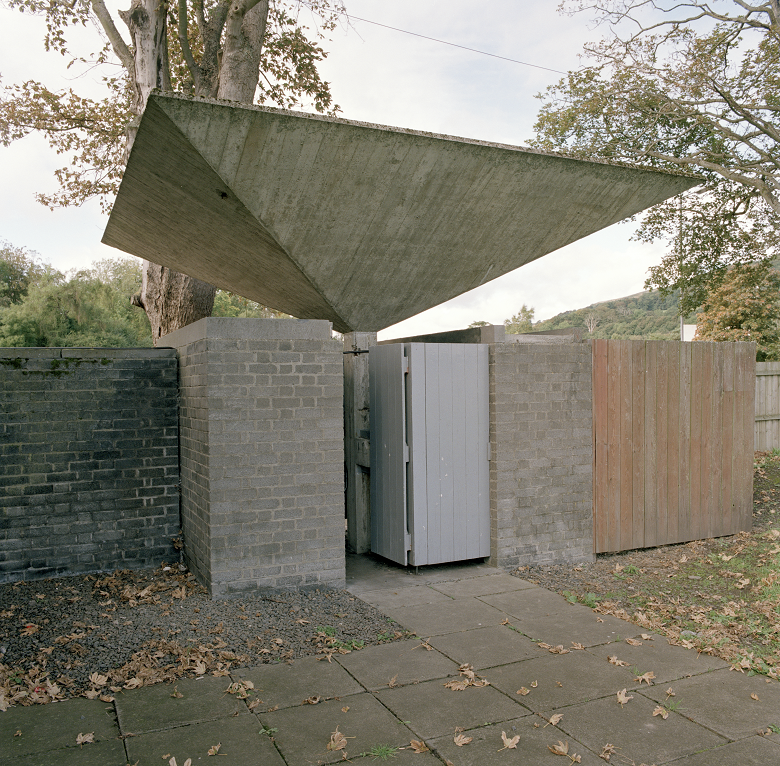 A turnstile at Gala Fairydean FC

Of this diversion the Scots are so fond that, when the weather will permit, you may see a multitude if all ranks, from the senator of justices to the lowest tradesmen, mingled together in their shirts, and following the balls with the utmost eagerness.”

Tobias Smollett summed up Scotland’s passion for golf in the 1770s. At this time, the modern game was beginning to take shape in Scotland.

Along with codified rules and open competitions, a social scene developed. Golfers gathered at local inns before dedicated ‘golf houses’ sprang up close to popular courses. By the end of the 19th century, they had become functional as well as convivial.

The “nineteenth hole” provided changing rooms and storage space, as well as somewhere to socialise after a round. 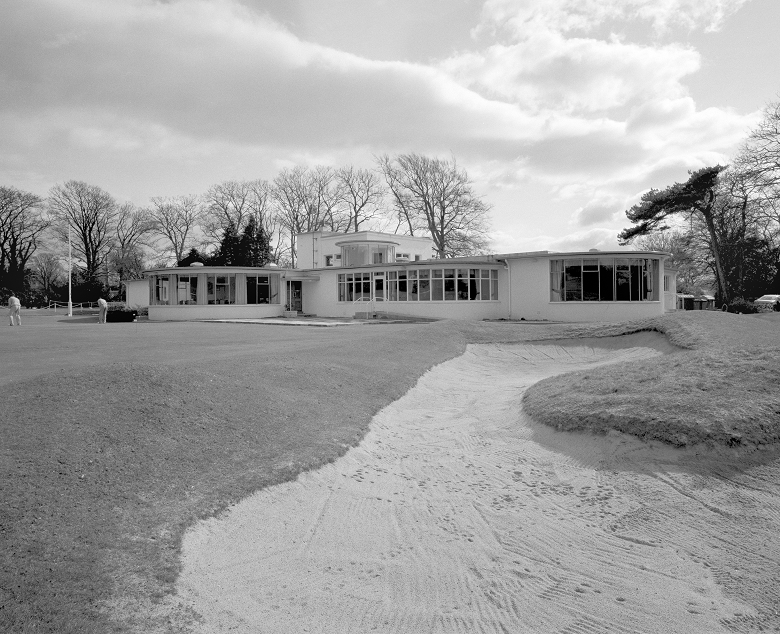 The original headquarters of the Dunbartonshire club was, quite randomly, destroyed in a nighttime air raid in May 1941. German bombers may have believed it to be a tactical target, having mistaken the golf course greens for oil tanks.

When the clubhouse was rebuilt in the 1950s, planners made the unusual decision to look back at the style of the inter-war years.

Outdoor swimming pools known as a ‘lidos’ were incredibly popular in Scotland during the middle of the 20th century. The government used them as a way of promoting public health and physical fitness.

But lidos were also the place to see and be seen, with every town vying to build the biggest and the best. Some lidos were huge – Stonehaven’s had seats for 3,000 people; Portobello’s could hold a staggering 6,000. 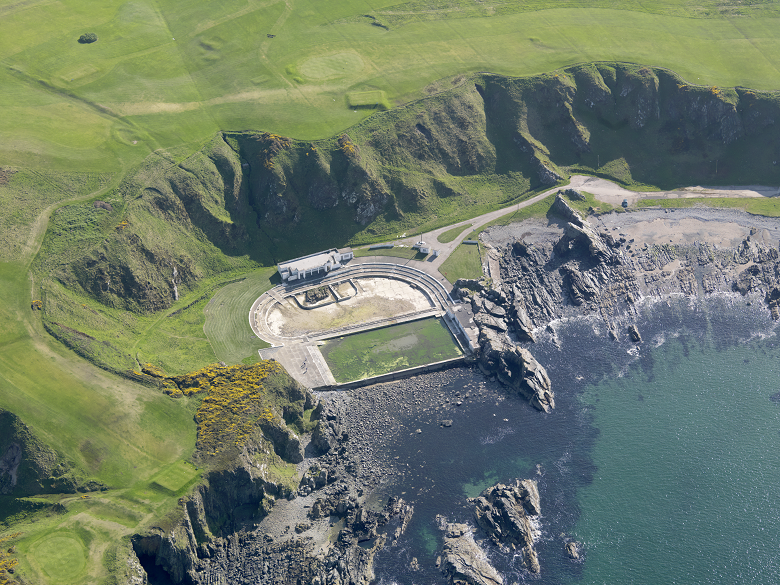 Tarlair Lido, near Macduff in Aberdeenshire opened in the summer of 1931. It is modest compared to bigger lidos (the one at Dunbar had a ballroom!) however its Art Deco style is impressive, as is the spectacular location in a rocky bay.

The facilities included a boating pool and paddling pool, along with a tea pavilion, changing rooms and kiosks.

All of Tarlair’s three pools were fed by the sea and would be completely covered at high tide. This design is no doubt a reason for its decline in the 20th century. Holidaymakers opted to swap the chilly North Sea for the Mediterranean! 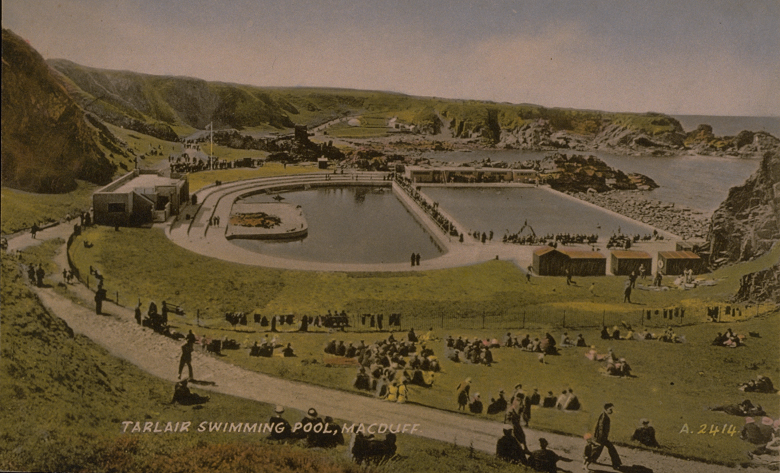 Tarlair Lido in its heyday, 1935 (Image courtesy of Scran)

Now that we’ve got the ball rolling (pun intended), why not head to our online resources to find out more about Scotland’s sporting past? 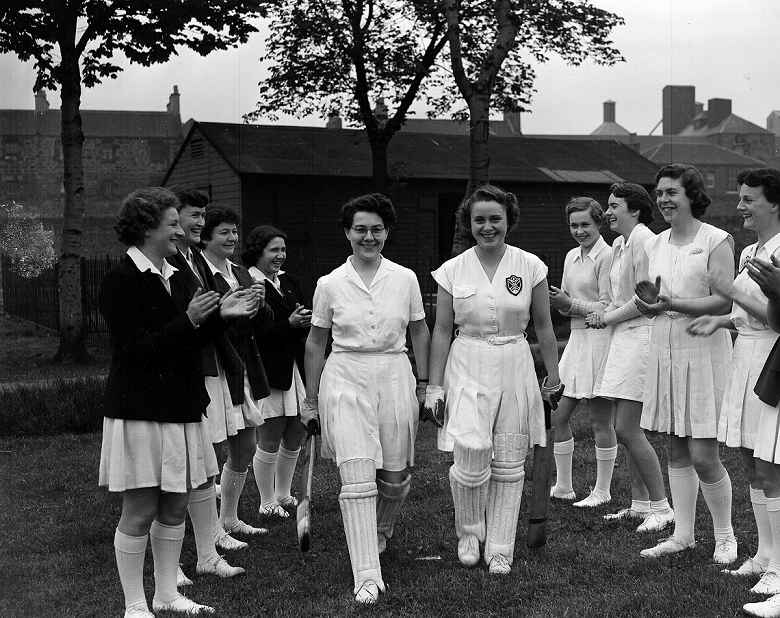 Edinburgh University take on Leith Albion at cricket, May 1950 (Image courtesy of Scran)

Our Historic Environment Portal is the place to go to check if your local clubhouse or your favourite team’s home ground is a designated building. On our Canmore website you can search the National Record of the Historic Environment for everything from tennis courts to ice rinks.

Over on SCRAN, our online learning service, there’s thousands of archive images and videos of Scotland’s sporting past to enjoy.

For even more sporting heritage, why not head to Fife and one of the world’s oldest tennis courts?