Tintin and the Secret of the Archives: What inspired The Black Island?

Delve into our archives as we take a look at the real life places in Scotland which provided inspiration for Tintin and the Black Island.

Tintin the adventurous reporter is one of the world’s most recognisable and beloved comic-book characters. The creation of Belgian cartoonist, Georges Remi (AKA Hergé), Tintin is also extremely well-travelled. As well as trekking through Tibet, diving for treasure, and exploring the Moon, Tintin and his pet dog Snowy even found time to visit Scotland!

In Tintin and the Black Island, our hero travelled to a crumbling island castle in Scotland. Join me in an adventure through Historic Environment Scotland’s archive images as we explore some of the historic sites which inspired the locations in this comic book.

Blistering Barnacles, Tintin is in Scotland!

The Black Island is an adventure story set against a Scottish backdrop. Fishing villages, stone cottages, and crumbling castle ruins all make an appearance. The plot is full of mystery and skullduggery, similar to John Buchan’s The 39 Steps – another tale that sees the hero tracking the baddies to their lair in a Scottish castle. John Buchan was not the only Scottish author to use Scotland’s historic places to spin a ripping yarn. Robert Louis Stevenson and Sir Walter Scott set their own page-turners in a world of forbidding castles, secluded islands, and winding old town backstreets. (Uncover more Scottish literary locations in this recent blog!)

Tintin fans (especially in Scotland) will instantly recognise the iconic front cover to The Black Island. But did you know this is one Tintin book which was actually updated several times? The Black Island was first published in 1938, then again in 1943 and in 1966. Before the publication of the 1966 version, Hergé’s fellow artist Bob De Moor was sent on a research trip. On this trip that De Moor visited and sketched places across England and Scotland. He even borrowed a Scottish police uniform to draw! 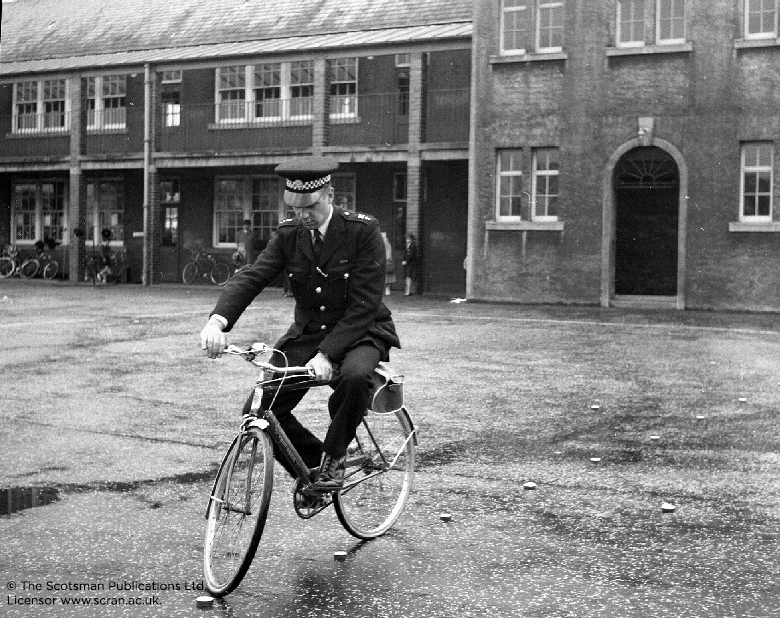 This photo, from The Scotsman archive on Scran, shows a policeman demonstrating road safety skills in 1958.

Hot on the trail of a ne’er-do-well, the first place that Tintin and Snowy visited on their trip to Scotland – after a bumpy plane landing – was a crofter’s cottage. The traditional cottage is similar to the one shown on this image from our archives. Hergé himself had a photograph of a cottage like this in his own files. 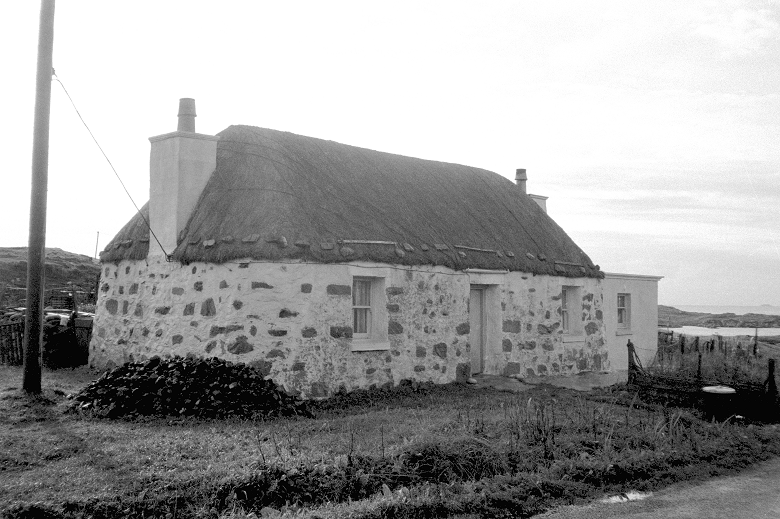 A Volley of Vile Villainous Villages!

After walking through rugged hills, the intrepid pair arrived at the village of Kiltoch. In the 1938 version, Kiltoch contained half-timbered houses which were more common in England than in Scotland. 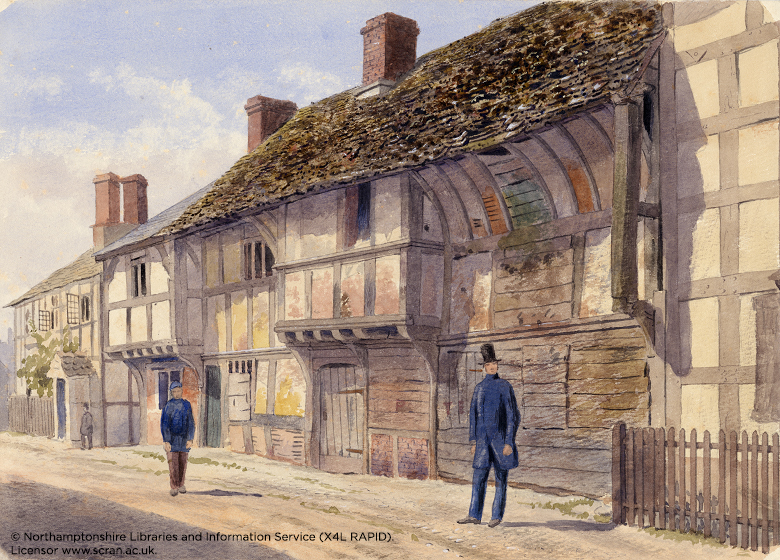 Half-timbered houses like this appeared in the original edition of the story, but were revised to be more in keeping with Scottish architecture in the 1966 version.

After Bob de Moor’s research trip, the buildings of Kiltoch were updated to look more like a Scottish fishing settlement. If you’ve ever visited the seaside villages of the East Neuk of Fife you might see a resemblance.

In the 1966 edition, Tintin and Snowy walked past buildings with very Scottish features. External stairways and what could be the square tower of a tollbooth are reminiscent of this view in Dysart. 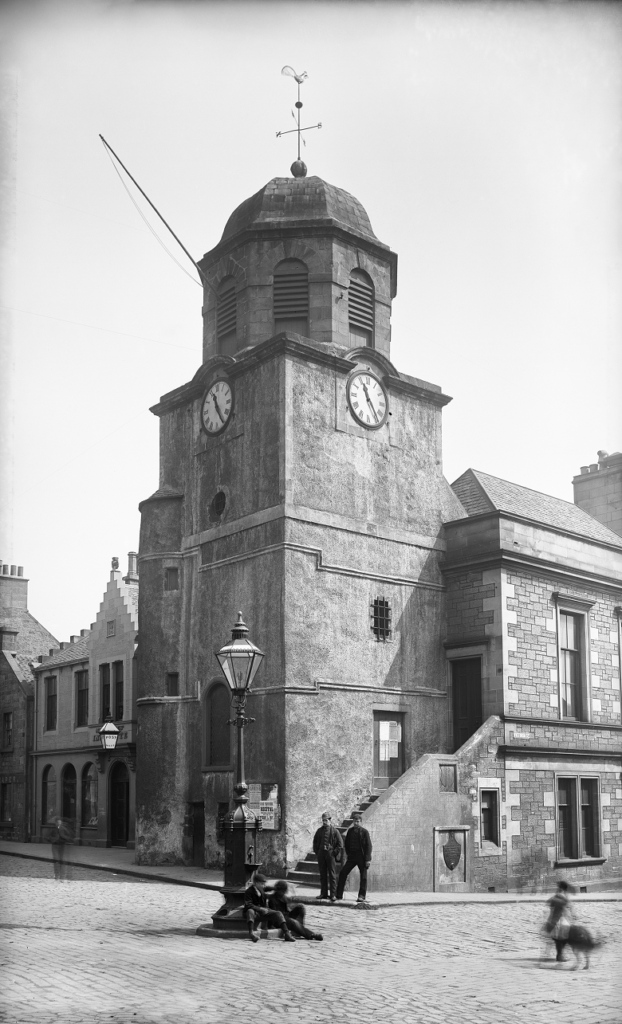 Dysart Tolbooth would once have housed the magistrates, the council, a prison, weigh-house, and guard-house.

However, the main inspiration for Kiltoch was Castlebay on Barra. It was from here that Tintin and the long-suffering Snowy rowed out to Craig Dhui Castle on the mysterious Black Island, despite the warnings of fearful locals!

Castlebay had already achieved fame by 1966. It featured in the Ealing comedy Whisky Galore!, which was filmed there in the 1940s.

The climax of Tintin’s adventure in Scotland takes place in a ruined castle on the Black Island – Craig Dhui Castle. One inspiration for Craig Dhui Castle would certainly have been Kisimul Castle, an island fortress visible from Castlebay.

Kisimul Castle, off Barra, is also known as the ‘Castle in the Sea’.

Another contender for the real-life castle on the Black Island is Lochranza Castle on Arran. This was another of the places Bob De Moor visited while carrying out his research.

Lochranza Castle is not on a small islet like the castle in Tintin’s adventure, but it is surrounded by water on three sides. Both Craig Dhui Castle and Lochranza Castle have an oriel window – a balcony room jutting out from the main building. 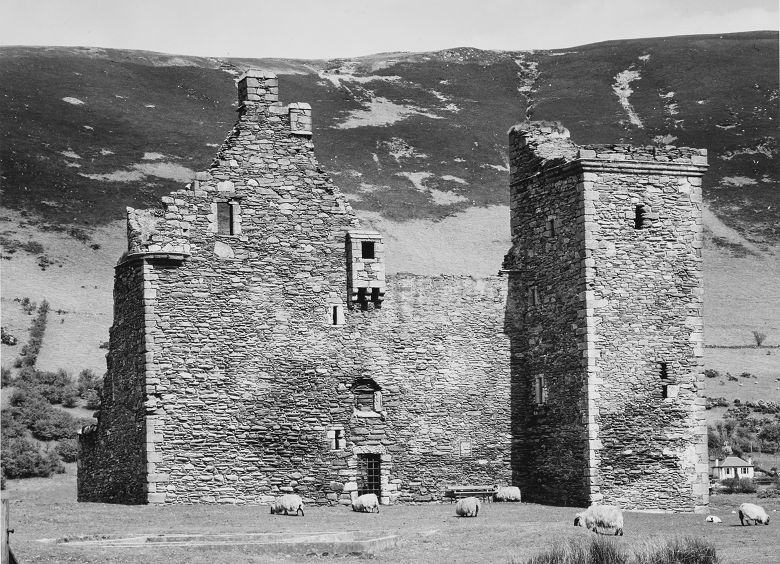 Lochranza Castle is situated on a peninsula extending into beautiful Loch Ranza in the north of Arran.

Scotland has no shortage of castles, and many of them could be seen as models for the castle explored by Tintin and Snowy.

Did Scotland turn the tide for Tintin?

It’s interesting to note that some experts believe that The Black Island was a turning point for Tintin’s adventures. In this book, Hergé’s portrayal of Scotland was more favourable and balanced that other “foreign” countries Tintin had ventured up to that point. Some scholars and Tintinologists have described Hergé’s earliest books as racist and anti-semitic.

Indeed, after the Allied liberation of Belgium in 1944, Hergé and his fellow colleagues at Le Soir newspaper were accused of collaborating with Nazi occupiers. No charges were brought against him. However, the claims have continued to cast an uncomfortable but unavoidable shadow over the plucky young hero.

In an interview from 1983, Hergé attempted to distance himself from the criticism, explaining: “The fact is that while I was growing up, I was being fed the prejudices of the bourgeois society that surrounded me. It’s true that Soviets and Congo were youthful sins. I’m not rejecting them. However, if I were to do it again, they would be different.”

Now that you have seen some of these castles and other places in this article, you can explore more images of historic places on our Canmore website.

Historic Environment Scotland manages castles and historic places across Scotland. Why not plan your own adventure? But beware the Black Island!