We look back on rugby’s first international match, when Scotland and England met for the first time in Edinburgh 150 years ago this month.

The first international game of rugby was played here in Scotland 150 years ago. On 27 March 1871 Scotland faced England at Edinburgh’s Raeburn Place, laying the foundation for the Calcutta Cup: one of the most eagerly anticipated matches in the annual rugby calendar.

The origins of the sport we recognise today as Rugby Union are intertwined with the origins of modern football. Both can be traced back to medieval ‘folk football’, a chaotic game with few, if any, rules. 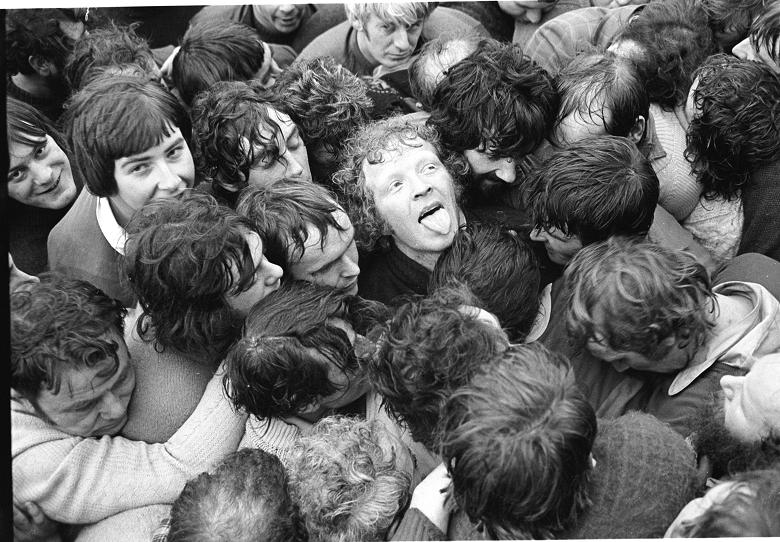 The Kirkwall Ba’ Game is a surviving example of ‘folk football.’ This archive image is from the mid 1970s.

We know that boys at several schools – including Rugby in Warwickshire – were playing football in the early 19th century. But each school had their own set of rules that they played by. This was a problem for the boys who wanted to play football once they reached university.

To enable everyone to more easily play against each other it was decided to create a single set of rules. This was the origin of the Football Association (FA). It was founded in 1863 and remains the governing body for English football today.

Unsurprisingly, there was debate about which rules to keep and which to exclude. Soon after its creation, teams who played the Rugby School version of the game chose to withdraw or not sign up to the FA rules. These teams continued to play their versions of the game. They eventually created their own governing body – the Rugby Football Union (RFU) – in 1871. 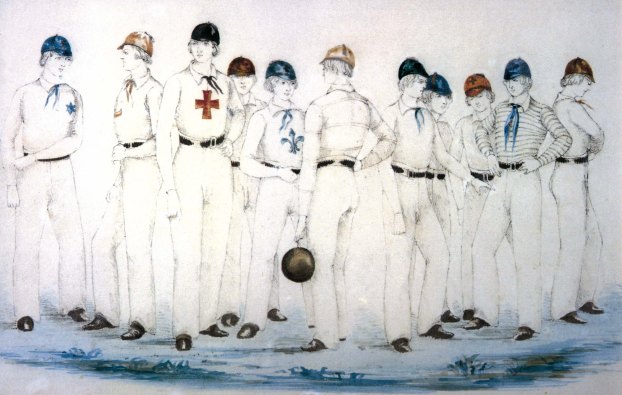 Scotland and England had played two unofficial matches under FA rules in 1870. However, those representing Scotland were largely men living in London with some connection to the country they were representing.

So, in December 1870 The Scotsman newspaper and Bell’s Life sporting paper published a letter signed by the captains of five Scottish teams. The letter pointed out that most senior clubs in Scotland played by “the Rugby code.” As such, the matches played under FA rules did not “bring together the best team Scotland could turn out”.

It challenged any team selected from the whole of England to a twenty-a-side Rugby rules match, to be played in either Glasgow or Edinburgh. It went on to promise England “a hearty welcome and a first-rate match”.

The FA ignored the challenge. But London based team Blackheath had walked away from the FA in 1863. They rose to the occasion and began to assemble a team. 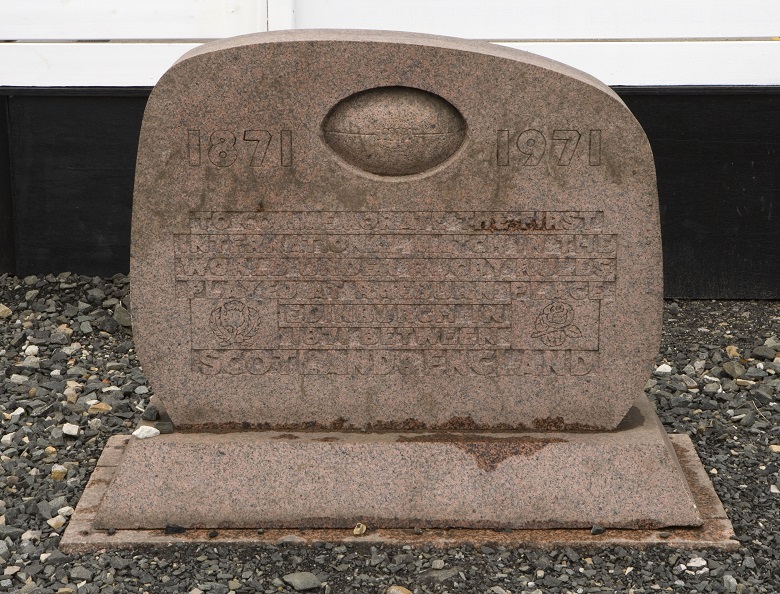 The centenary of the first international rugby match was commemorated with this memorial at the Raeburn Place ground.

A crowd of 4,000 spectators watched the match which was played on the grounds at Raeburn Place in the Edinburgh suburb of Stockbridge. The game was won by Scotland who scored two tries and one goal (what we would call a conversion) to England’s one try.

The points system then was very different to today. A try was not awarded any points in itself. It allowed a “try” at kicking at the posts, which if successful was a goal.

Even though the game was played according to Rugby rules there were still disputes. The second try for the home side was the result of an accidental knock-on. This was considered acceptable in Scotland but drew protests from the English team.

The match was a financial, sporting and social success. Spectators paid one shilling to watch the game which raised over £200, a lot of money at the time. Interest in sport was on the rise. Following Scotland’s victory the match ball was displayed in a shop in Stockbridge. 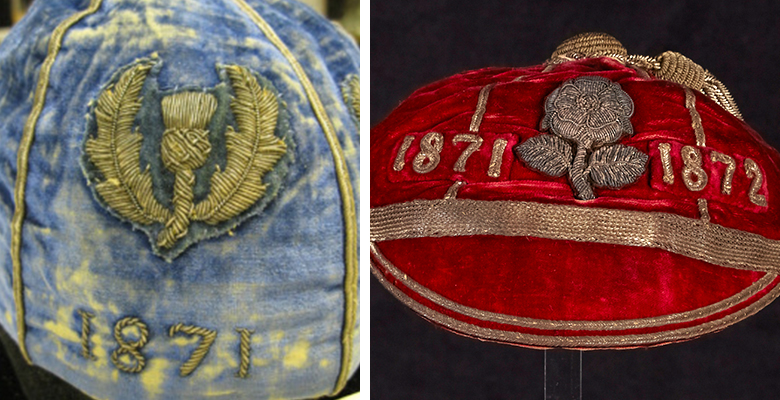 The following year the teams played again, this time in London, and they then continued to play each other annually. These matches were the origins of today’s Six Nations tournament. Ireland, Wales, France and Italy all joined in at various stages between 1875 and 2000.

The annual clash between Scotland and England is now known to most as the Calcutta Cup match, after the trophy presented to the winning side. It was first awarded to England in 1880 (the game the previous year had ended in a tie). 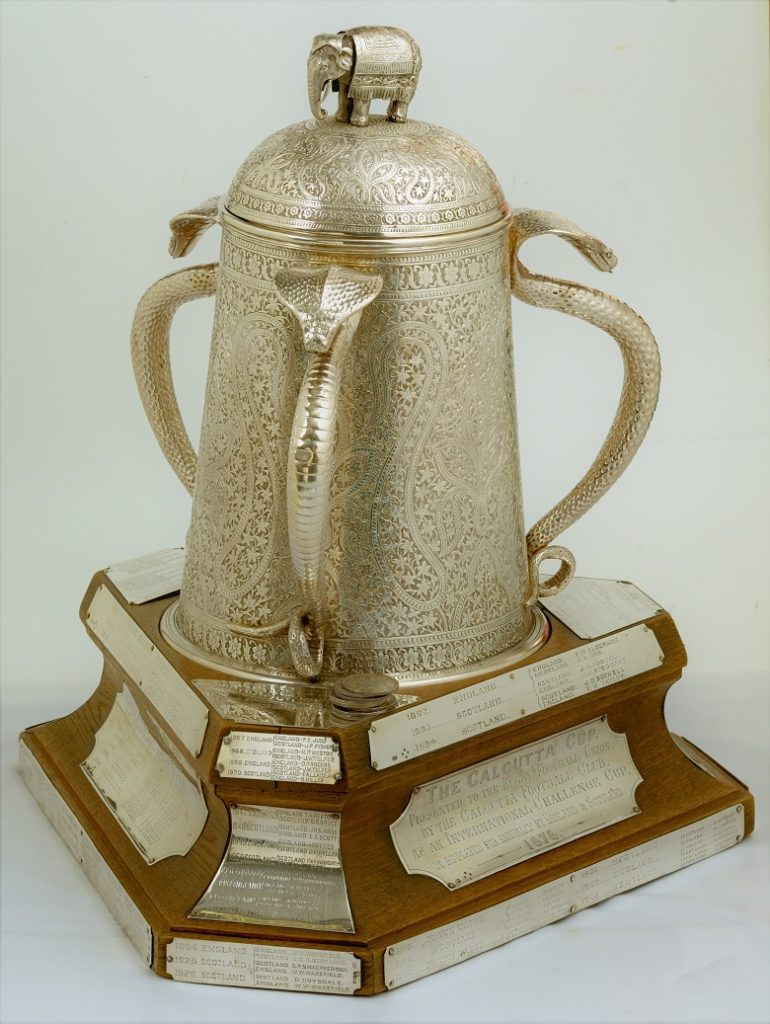 The trophy was gifted to the Rugby Football Union by the Calcutta Football Club. The team disbanded in 1877 after only four years due to dwindling membership (most were in the British army) and the increased popularity of other sports, particularly polo.

The remaining members wished to use the 270 silver rupees from their bank account to do “some lasting good for the cause of Rugby Football”. The funds were offered to the RFU to be used for the creation of a “Challenge Cup” which could be played for annually. It was the RFU that decided that the trophy would be presented to the winner of the annual Scotland vs. England match. (Although Ireland had played international matches by this point, they were yet to win a game).

It was agreed that the Calcutta Cup should be made in India. The club’s remaining rupees were melted down and crafted into the ornate piece that is still used today.

Although the winning team get to keep the real Calcutta Cup until the next fixture, the ones that are presented on the pitch at the end of the game are replicas since the original is delicate.

Want more sporting heritage? Elsewhere on the blog you can explore some of Scotland’s most unique sporting venues or have a regal knock-about at one of the world’s oldest tennis courts. You can also enjoy flicking though more photos from Scotland’s sporting past over on Canmore.